Oh, It's Him Again

As I have noted previous, the Rincewind books are my least favorite books in the whole of the DiscworldAt first blush, the Discworld series seems like just a parody of fantasy literature. Dig into any of the books, though, and you'll find deep and funny tales of a world just slightly off from our own. A world that, yes, is a flat disc carried through space on the backs of four elephants that, in turn, ride on the back of a giant space turtle. series. Rincewind is a character best taken in small doses but, for his many early appearances, the character was pitched as the lead hero of the adventures. This would, eventually, change but, sadly, not in Eric. This novella (not even really long enough to be a full book), is essentially pitched to tie up one loose end -- namely Rincewind's fate after the end of Sourcery -- but it doesn't really do much else to push the whole of the series forward. 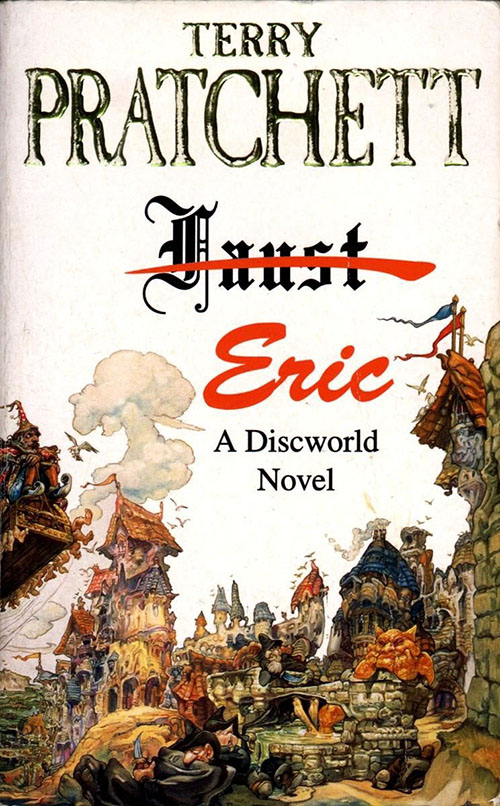 As you may remember from Sourcery, Rincewind had his big heroic moment and sacrificed himself to save Coin, the young sourcerer. A hole had been torn in reality due to the overload of magic and Coin had fallen through that hole. Rincewind threw himself in, following the kid, and managed to push the kid back through before the hole closed. Entrance shut, Rincewind was trapped in the Dungeon Dimension, running for his life for as long as he could... And then we left him there for three books. Thankfully (I guess), that wasn't the end of Rincewind as, one day sometime later, he magically appeared in the workshop of a demonologist. A young, pre-teen demonologist named Eric, to be specific. Eric thought Rincewind was a demon (since he'd done the spell to summon a demon and had gotten the wizard), so now he expected Rincewind to perform three wishes (as a summoned demon should): to live forever, to have the most beautiful woman ever, and to be the ruler of the world.

Surprising everyone (especially Rincewind), the wizard was able to actually grant those wishes. With the snap of his fingers, Rincewind could taken himself and the young boy to an appropriate spot to fulfill each of those wishes in turn. Sadly, each of the wishes grants Eric literally what he wanted (but not exactly what he meant), showing that you should never trust the magic of a demon (or a wizard mistaken for a demon). Now the two are on the run from actual demons who want to use Eric (and kill Rincewind) for their own nefarious reason.

The first issue I have with Eric is its length. Terry Pratchett is certainly no Stephen King (not the least of which because he's not a hack writer -- yes, I said it!) and his books have never book epically long tomes, but even by the British author's normal standards, Eric is a slight read. Unlike many of his other books, which tend to bounce between multiple plot lines all leading to a greater whole, Eric is a focused story about Rincewind, Eric, and their misadventures. It's a fast read, sure, but also a shallow one.

Part of the fun of a Discworld book are the surprises, the way all the diverse elements build to a satisfying whole by book's end. Eric tells a much more predictable (and less interesting) story, a very linear adventure that travels from point A to point B before just ending abruptly. It's clear the author had a very specific idea -- three wishes that go bad, but not in the horrifying, monkey-paw way but in the dry, British way -- and once those three little tales were told, he just had to get through the ending and move on. The adventures are amusing (if not laugh out loud funny), but they certainly aren't strong enough to carry the book.

To make up for this the author tries to wave in a story about the machinations of the demons that run Hell. Asfgl, the new Demon Lord, is running Hell now and he has some very different ideas about how Hell should be run. Specifically, it should actually be hellish, a real punishment for the souls of the damned, so he has to demons giving cruel tortures like making the souls attend tedious office parties or showing the damned long slideshows of vacation pictures. It's truly cruel, and not in the way the rest of the demons of Hell appreciate, so they plot against him.

This plot line about Hell is actually pretty inspired and I certainly enjoyed it more than the main story with Rincewind and Eric. Sadly, it's also only about five percent of the book, passing as little more than a blip. It doesn't land well because we never get a solid focus on all the demon characters, and since we don't know enough about them to care, we don't invest in their plots and intrigues. A different version of this story would have given this plot line more heft, would have let us invest in this characters, and it would have made their story more intriguing, more interesting. It could have carried the adventure.

None of it really amounts to anything in the end. The book breezes through the content very quickly, never stopping in any one adventure long enough for use to get a full story. It's like if the first book in the series, The Colour of Magic, was done as an abridged version. Rincewind and Eric have the same kind of dynamic as Rincewind and Twoflower but they spend even less time together. None of it clicks, none of it sinks in. Everything happens quickly and then we just move on.

In short, Eric is a mess. Thankfully it's a quick one. It's a short read and before you can really start to hate it the novella is over and you get to move on to the next story in the series. It gets out of its own way well enough, so its hard to really hate the novella, but that doesn't mean I'll ever like it.