The Smell of Cold Hard Cash

I don't think I've really warmed to Moist Von Lipvwig. Introduced in the thirty-third DiscworldAt first blush, the Discworld series seems like just a parody of fantasy literature. Dig into any of the books, though, and you'll find deep and funny tales of a world just slightly off from our own. A world that, yes, is a flat disc carried through space on the backs of four elephants that, in turn, ride on the back of a giant space turtle. book, Going Postal!, Moist intrigued me enough to keep reading, a kind of anti-hero that was quite different from most of the characters featured in the series. This was a guy that had to grow into becoming a better person, not someone that had that sense of right and wrong innately baked in. It worked in Going Postal!, but that left the open question of where could the character go from there? 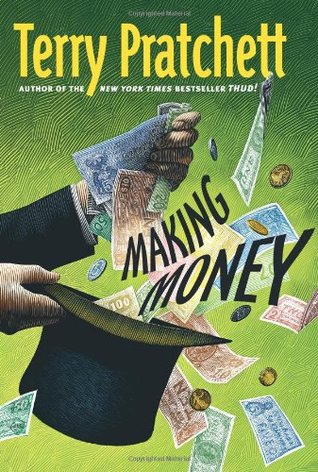 That's the question the second book in Moist's sub-series, Making Money!, seeks to answer. Frankly, though, there really isn't much to go on here. The basics of the book are a lot like the first novel -- Moist gets conned into taking over an institution of Ankh-Morpork, this time the Royal Bank instead of the Post Office, meets some strange people with their own foibles, and then finds a way to put his con-artist skills to use remaking the place in his image. You could more or less layer one book over the other and have the same story. In essence, there really wasn't very much more to add to Moist's story, all things considered.

In the novel, Moist, through trickery and a bit of bad luck, ends up in charge of the Royal Bank and Mint. Well, more accurately, he ends up owning the dog, Mr. Fusspot, that inherits all the shares of the bank and the title of Chairman, but whoever owns the dog owns the role. Because of this, Moist has to take over and actually run the bank, taking it from a stodgy and, frankly, nearly broke endeavor and turn it into something fresh and new and ready for the new direction of the city.

The only problem is that not everyone wants to see Moist succeed in this goal. The entire family that owns shares of the bank. the Lavishes, want to see control of the bank returned to them (and will do anything, including killing a dog, to do it). Then there's chief cashier, Mr. Bent, a man as stodgy as the bank itself, who is resistant to change and just might fight all of Moist's reforms. And he will have to reform the bank because it's going bankrupt, losing money in the Mint on every coin it makes. Moist has a lot of enemies after him and he'll have to spin his web of lies and delights if he wants to make it out of this one alive.

Although Moist is a con-artists, and not a magician, the two jobs are essentially the same. You show your mark something, convince them its perfectly normal, and then, with a flourish, change their perception of it. Yes, it's all an illusion (and once you know the trick it becomes vastly less appealing), but for a little while there the magic is real. The problem with it is that once you've seen the trick it becomes vastly less interesting when done a second time. Unfortunately for Moist he only has one trick and now he's doing it twice.

Consider that in Going Postal! Moist took over the Post Office and one of the first things he did was reform the old way the office handled stamps, as literal stamps, and remade them into collectible bits of paper and art. Them in essence, became de facto currency, and the people flocked to it. It was a new and brilliant idea for a city that was in desperate need. Now he has a mint, and his first idea is to stop the Mint from making coins and, instead, to make frilly bits of paper and art that will become de facto currency. The idea is sound, it's good to see the city get this lightweight form of currency, but we've already seen this trick.

There's also the Lavishes, a group of greedy and nasty business people all vying for control of the banking industry. This should sound a lot like the people that used to be in charge of the Clacks telegraph system back in the previous book. They had a form of communication and wanted to control it (and the flow of money around it). Moist moved in, disrupted their business, so they went to great lengths to try and take him out. The Lavishes fill the same role, pull the same tricks, and fail the same ways. Moist can spin gold out of the air and the villains he faces are never up to the task.

The on interesting change, such as it is, comes from Cosmo Lavish, a crazed idiot who becomes the primary antagonist for Moist. Well, really, he fills a void on the opposing side of Moist but their interactions are rather limited. What's interesting about Cosmo is that he wants to be the ruler of the city. He doesn't want to fill the post of Patrician currently filled by Vetinari but, instead, wants to become Vetinari himself. His diseased mind is so desperate for this that he keeps buying pieces of the Patrician's own home (or, at least, forgeries there of) so that he can steal the Patrician's essence and become him. It's a weird idea, totally bonkers, but at least it's something fresh and new to add a little bit of something extra to the novel. Sadly, Cosmo doesn't show up after this book so it's just a one-off idea never pursued again.

One bit I didn't like, though, was that the book minimizes Adora Belle Dearheart, Moist's main squeeze from the first book. Adora Belle is a tough and spicy character that I rather enjoyed, but she's relegated to a side plot about golems (which, admittedly, was her prime motivating factor in the first book) and rarely seen this time around. When she shows up she's great fun to have around, but her time is much too limited in this novel. Moist needs her as a balance (something even the novel calls out), but then doesn't do enough with her to make it happen.

In the end, the novel just doesn't entirely come together for me. There's not enough new introduced here to make it feel like a proper and worthy sequel to Going Postal!, with Making Money! feeling like a pale imitation. There are some fun elements brought in, and a few neat ideas, but not enough to make it all come together. Moist needs more than the same adventure all over again, something fresh and different that plays well with his skills. Thankfully, his next book actually provides that adventure...