Sometimes I do have to wonder how or why a movie gets made. I'm sure that in much the same way everyone thinks they can somehow be a writer, or a designer, or the like -- "It's easy, you can just do that in an hour, right?" -- plenty of people seem to think that just because they have access to a camera they are somehow filmmakers. All you need is sets and actors and effects, and all that can be found on the cheap, right? Movie magic will just happen afterwards. 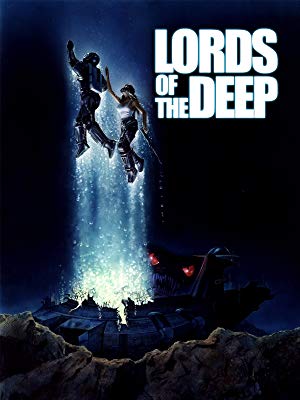 Such had to be the thought process, at least in part, behind this week's cinematic travesty, Lords of the Deep, a film that clearly wants to be a bigger, more impressive film than it is were it not for the criminal lack of money or talent involved at every step of the process. It's a film that, had it been made in the 1950s it still would have come off as a cheap, cruddy monster movie but at least it would have been excusable for the time period. Instead, it came out in the spring of 1989, and the best thing that could be said about it is that I've certainly seen worse movies. Not many, to be fair, and not often, but while this movie is bad, it's not Atlantic Rim bad. It's pretty close, though.

In the film, a group of scientists have been working at the Neptune Base, a deep sea base studying... well, that's not entirely clear from the outset of the movie. The crew is about to be cycled out, replaced with another crew from the surface who will continue their experiments and studies. Unfortunately the next crew is waylaid, their submarine crashed at the bottom of the ocean and the crew itself missing. Soon after, the Neptune base suffers a power outage and one of the crew has to go out to fix her. When they get back, though, the crew seemingly has been killed, his body turned into a mass of jelly. And then the jelly starts to mutate. Soon enough people on the base start dying, and the rest of the crew have to figure out what's going on. Is the slimy mass hostile? Is it an alien creature? And who is really behind all the deaths?

At it's core, Lords of the Deep is a sci-fi monster film with a twist: the slime creatures are actually aliens, but they're here to help humanity, not hurt it. Humanity is slowly killing itself via pollution and global disasters (the hole in the ozone layer is mentioned prominently), and unless humanity changes its ways, everyone is gonna die. So the aliens are here to help, although what their actual plan is to save humanity is never made clear. They mostly just float around, looking like very friendly (and very cheap) manta ray puppets while things happen off camera and people die. The budget clearly wasn't there for great effects, either for the aliens or the dead bodies that start popping up, but so much of the movie happens off screen that, at times, it's hard to really know what's going on.

Of course, the movie isn't aided by the fact that the people behind the camera really don't know what they're doing. In researching this film I found out that the most talented photographer on the project, Janusz Kaminski (a future two-time Academy award winner, and thank you Wikipedia for that factoid), was removed from the his role on the 2nd unit production team after two weeks of filming because his footage look too good and didn't blend with the material shot by the 1st unit. That should clearly indicate to you the level of shoddy work the production was actually able to achieve. Even at it's best it's still workmanlike throughout. 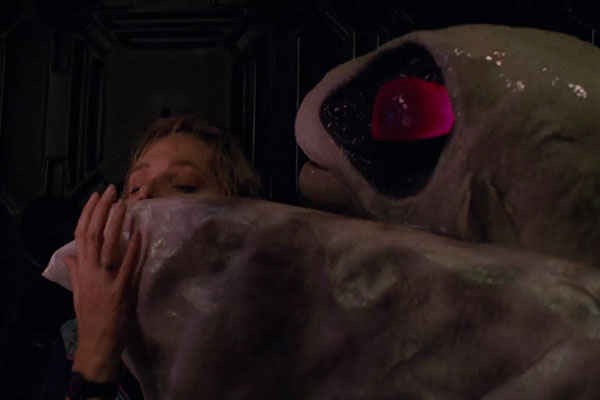 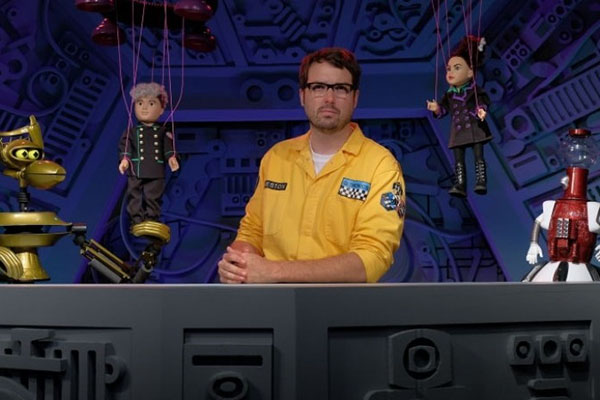 Now, I will note that this is a Roger Corman production, so it's not as if we should have expected great production values going in. Corman films are, famously, cheap-o affairs done on the quick and dirty. You don't go into a Corman expecting high art; hell, you don't go into a Corman expecting low art. The best Corman films have passable thrills and a "so dumb it's watchable" quality that carries you through the film. There are a fair number of his films I've watched, and liked for what they were (hell, we've reviewed a couple of them on this site already, and while I hated Slumber Party Massacre II it certainly didn't lack for ambition while Slumber Party Massacre III was pretty decent little slasher). But by and large, Corman films are pretty crappy, cheap thrill productions that are very likely to suck.

And Lords of the Deep certainly does suck. It's got all the production value of a Corman film (i.e., none) without any of the cheap thrills. It's not funny, it's not charming, and (at least in the MST3K cut, which is the only one I'm going to watch at this point) there isn't even any gore or nudity to really get you through it. It's a movie that wants to have a big message -- humanity is killing itself -- but it tells it with the cheapest budget it possibly can.

The most interesting thing about the film is that it was made around the time of other, better movies like Abyss and Leviathan, making this a mock-buster in the vein of pretty much everything The Asylum has ever produced (such as Atlantic Rim). In that regard you can kind of understand why Corman green-lit this film -- clearly there was an audience for this kind of movie so maybe enough people could be duped into watching this low budget creature feature instead of its bigger budgets brethren. I can see the logic, but it certainly would have been nice if, in the process of capitalizing on this trend in cinema the production had cranked out a film that was, in any way, fun.

Thankfully, the MST3K crew was here to help get us through the movie. While the film itself is boring, Jonah and the bots manage to find plenty of material to riff on, mostly poking fun directly at the cheapness of the production (a never ending source of material for the guys). There were also a few pretty filthy jokes that the guys told which belayed the generally PG tone of the series -- it wasn't anything that would offend most people, or ruin the innocent eyes of children, but they were just blue enough that I was surprised (and delighted) the show went there. As far as commenting on the movie itself, MST3K brought their A-game.

The skits, though, weren't as good as I would have liked. While the invention exchange was half-way amusing, it essentially amounted to two half-baked ideas, neither of which really had satisfying punchlines to them. The rest of the skits in between were about on part with the opening bit, and were more forgettable than enjoyable.

Still, when I come to MST3K it's for the movie itself (and all the jokes told at its expense), and in that regard the episode wins. It's not the crew's finest effort overall, but it is certainly a watchable affair that claws an enjoyable hour-and-a-half out of the wreckage of a truly terrible film.