Maybe They Should Have Gone with Perseus Instead

Okay, maybe I was wrong. Perhaps a truly terrible movie can lead to one of the best episodes of Mystery Science Theater 3000First aired on the independent TV network KTMA, Mystery Science Theater 3000 grew in popularity when it moved to Comedy Central. Spoofing bad movies, the gang on the show watch the flicks and make jokes about them, entertaining its audience with the same kind of shtick many movies watchers provided on their own (just usually not as funny as the MST3K guys could provide). It became an indelible part of the entertainment landscape from there, and lives on today on Netflix.. That certainly does seem to be the case with The Loves of Hercules, a truly wretched movie that made for a great episode of the series. The movie may be crap but damn if Jonah and the Bots weren't inspired by it. 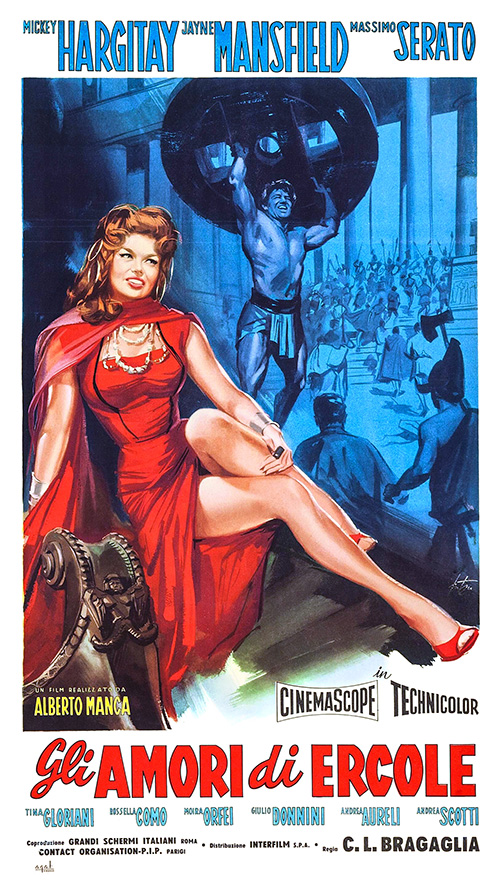 And yes, there is no way to sugarcoat this: The Loves of Hercules is a terrible movie in every sense of the word. A swords and sandals epic filmed during the height of that genre, a spaghetti muscle-man movie made after the 1958 Hercules proved to be a huge success (and made during an absolute glut of Hercules films during this era). I haven't seen the 1958 film, nor any of the other (increasingly ludicrous) films staring the demi-god from this period, but I can all but guarantee The Loves of Hercules is a low-point for the series no matter how bad the rest of the films might have been. It's so wretched.

To start with, the film managed to waste it's big budget (big enough to lure in star Jayne Mansfield) on bad special effects and cheap sets. Everything about the production seems chintzy, from the costumes to the monsters to the backgrounds. So many sections were obviously filmed on sound-stages, stages that were dressed up in a shoddy fashion that barely hides the studio-nature of the set-pieces. You never once are able to settle in to the film, to get lost in the details, because every second of the film screams, "I'm a poorly designed movie."

Cheapy films can still have their charms, and a badly designed movie can be elevated by the people working on the film. Oh, but if that were the case for The Loves of Hercules. No one involved in this movie turns in good work, either behind the camera or in front of it. For a start, I know that Jayne Mansfield was an accomplished actress, one who had a few big successes in her short career. Whatever acting talent she had was pretty well wasted in this movie as she turns in a wretched, disinterested performance. Half the time it looks like she's reading lines off a cue-card, and maybe she was just so she could know what her fellow actors were saying; most of them were clearly speaking in Italian while Jayne was speaking English, so it's possible the language barrier caused her performance to suffer. Whatever the case, the lead star of the project is easily the worst actor in the piece.

Not that Mickey Hargitay, Mansfield's husband and this film's Hercules, did much better. Although he was obviously game to do the minimal stunts the movie called for, his actual acting talent was nowhere to be found in this movie. Hargitay seems to have one, dumbfounded expression throughout the film , an expression he applies to every scene he's in no matter what he's doing or what's going on. Even in the scenes he shares with his then-wife, the actor is unable to muster any kind of convincing performance, let alone chemistry with the woman in front of him. 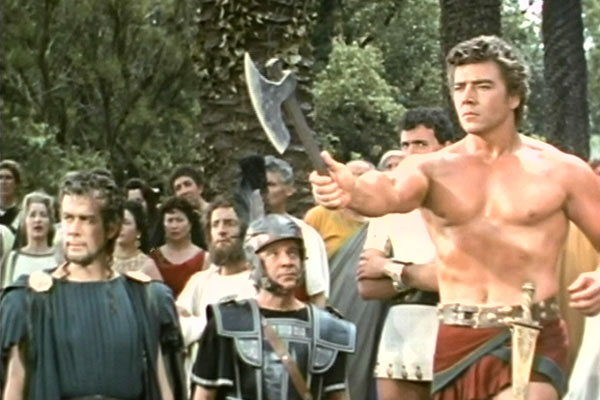 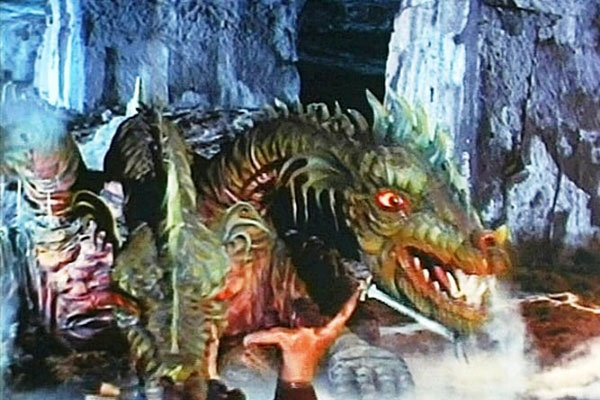 Plus, it must be noted, the film made Hargitay pick up any number of large objects (as he's playing Hercules, the strongest man in Greek myth), and the props that were made for Hargitay were clearly still too heavy. The actor struggles through every one of these sequences, visibly unable to lift the props with ease the way he was supposed to. It's just another case of the film being woefully unable to stage its production properly.

The story of the film itself is a barely-there blip to string a collection of scenes along. Essentially, Hercules's wife is killed in the open moments of the film. Herc then goes around, moping about his wife until (very quickly) he meets Queen Deianira (Mansfield). Immediately, all concerns about his dead wife are throw aside (who needs her, right?) as he immediately falls for the Queen. There are forces working against Herc and Queenie, though: the scheming Licos (Massimo Serato), the Queen's advisor who wants nothing more than to claim the throne for himself. Time and again he launches one poorly thought out plan for the throne, only to have Hercules, and dumb luck, work against him. Eventually he just stages a coup, throws the queen in the dungeon, and claims the throne.

And the thing is if he just hadn't involved Herc at all, Licos would have succeeded. Time and again Licos decides to make Hercules an active agent in his plans, and every time Hercules, the big, dumb oaf, manages to thwart the plan. If, instead of scheming, Licos had just thrown the queen in the dungeon (something he's able to do with ease by the end of the film simply because he wanted to), he could have had the throne, no questions asked. This is one of those stories where the hero is totally incidental to the story. The villain is his own worst enemy, he own downfall. It's easy to imagine a version of this story where Hercules doesn't show up and Licos still fails to steal the throne because some other hero shows up, or he gets a cramp, or a butterfly flaps its wings. Licos, in short, was clearly over-thinking things and should have just gone with the easy, simplest solution. Plus, then the movie would have been fifteen minutes, which is an absolute bonus.

But then, that version of the film wouldn't have been worthy of the MST3K treatment, and it's a total treat this time around. The guys are in rare form this time, giving a constant patter to the proceedings, one that's hilarious and absolutely on point. Their commentary during the film is liberally sprinkled with musical bits, snatches of songs sung here or that that keep the proceedings humming along. The boys all clearly have musical talent, and this commentary really highlights their abilities. It's fun and funny and a great time. 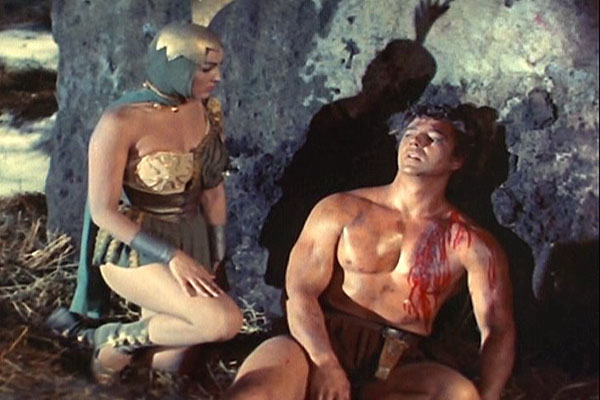 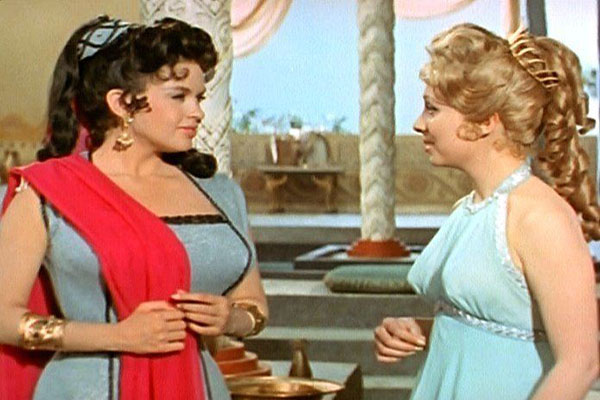 Really, about the only thing that keeps this episode from being an absolute classic is that the sketches between the filmic sections honestly aren't that great. The invention exchange is pretty mediocre -- neither the Turkey Dunk Tank for deep fried turkeys, nor the Jumping Bean Bag, really clicked -- and the rest of the skits barely made me crack a smile. This episode is all in the commentary, but it's so good there it patches over the rest of the flaws.

The Loves of Hercules is not a movie I could ever see myself watching. On it's own it's an absolute travesty, a waste of time, money, and talent. As an episode of MST3K it's a real winner. Watch the flick, just, maybe, skip through the skits this time around.