Better Without the Beast

This is going to sound weird to say, but today's movie, The Beast of Hollow Mountain, really isn't all that bad. As far as 1950s Wild West films are concerned, this film actually has its charms. It's decently acted, amusing in places, and were it not for the last-act twist that shifts the film into the "Weird West" genre (and kills the action in the process), it probably would have come out, been forgotten, and enjoyed by a select few as just another western. Up until the last act there's nothing really special about it, but it's also not the usual awful Mystery Science Theater 3000First aired on the independent TV network KTMA, Mystery Science Theater 3000 grew in popularity when it moved to Comedy Central. Spoofing bad movies, the gang on the show watch the flicks and make jokes about them, entertaining its audience with the same kind of shtick many movies watchers provided on their own (just usually not as funny as the MST3K guys could provide). It became an indelible part of the entertainment landscape from there, and lives on today on Netflix. fare. 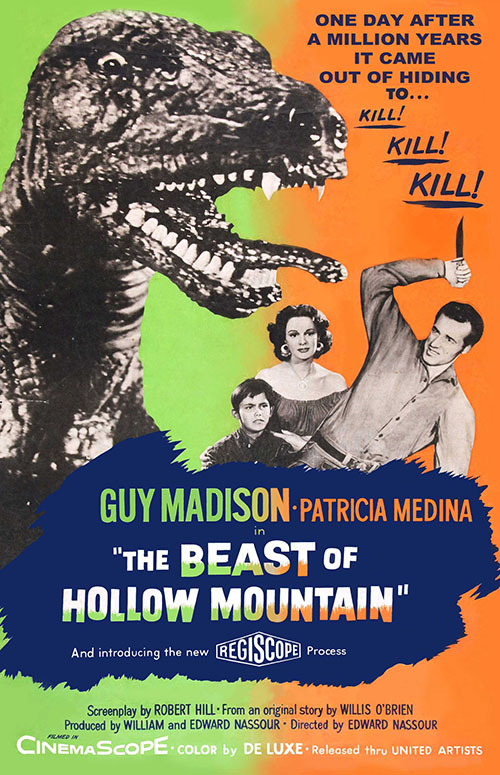 But then there's that last act, and wow, did it really destroy the movie. For a good hour or so, the film plays like another Western genre film. In the movie, two cattle ranchers -- Jimmy (Guy Madison), and American cowboy, and Felipe (Carlos Rivas) his Mexican friend -- butt heads with local cattle baron Enrique (Eduardo Noriega). Enrique doesn't like Jack because Jack is American, but he also is jealous of anyone that talks to Enrique's financee, Sarita (Patricia Medina). Not that he's entirely wrong to suspect there might be more between Jack and Sarita as they have an easy chemistry (and clearly are falling for each other). Thus, Enrique hatches a number of schemes to ruin Jack, steal his cattle, and drive the American out of the country (or maybe to his death).

To a certain extent I can see why people probably wouldn't enjoy this film too much at this point. Viewed with a modern lens this film certainly feels like a variant of the "White Savior" trope with Jack, the white guy, coming into Mexico to raise cattle and show he can keep up with the ranchers south of the border. This is just a subtext of the film as the film doesn't really go out of its way to try and make Jack into the superior being. It just so happens that the villain and all of his goons are Mexican, and even the people in the movie that aren't villains still feel like easy Mexican stereotypes (like the comic relief character Pancho and his son Panchito). This film certainly feels like it was made by a bunch of white Americans, embodying their world view even if they didn't mean for it to.

And yet, at the same time, I can appreciate a few of the moves the movie took to make it more inclusive for the era it was in. The film was made in Mexico, filmed in both English and Spanish (although, obviously, only the English version was covered on MST3K), and cast Mexican actors in every single role of the film, other than Jack. Even some of the touchier subjects, like the growing love between Jack and Sarita, is pitched simply as jealousy and not because of any Mexican/American racism. The movie may have been made in the 1950s but it doesn't seem as racist as it could have been. I know that's a low bar to cross, but at least it crosses it.

The thing is that I actually rather liked the easy charms of the film. Certainly the MST3K guys helped to make the film more fun and watchable, but this movie is just good enough that if it showed up on basic cable (back when I had cable), I might have gotten sucked in to watch a few easy minutes of it. It's a fairly low-stakes Western film, but it's entertaining for what it does. 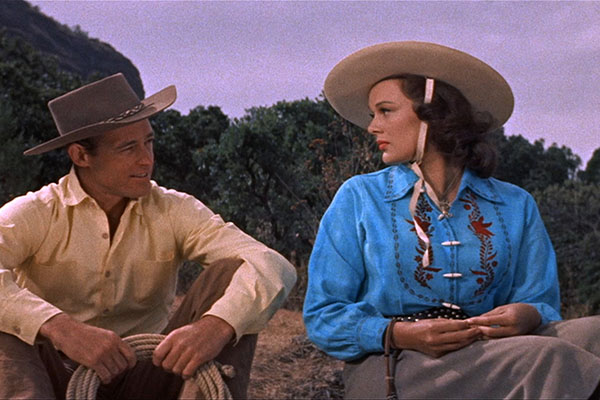 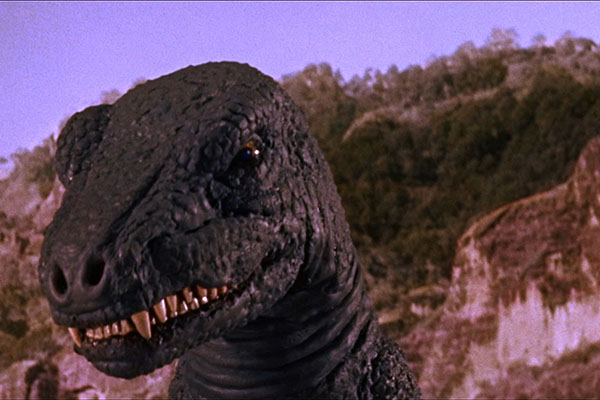 It's weird because normally MST3K covers real garbage fire movies (like most of the rest of this season so far). The Beast of Hollow Mountain, though, it a well produced movie. The acting is decent, with a couple of charismatic leads, and the staging and direction keep everything moving at a decent clip. For a solid hour or so you are actually able to invest in the rivalry between Jack and Enrique and enjoy the back and forth machinations between them. This isn't a lawless, guns-blazing shooter of a film, but for a simply Western drama, the film works pretty well.

But then we get to that last act and, seriously, this is where everything falls apart. For whatever reason, the producers of the film felt like they really needed to make this film into a monster movie. The film spends so long setting up the eventual reveal of the beast (just a random dinosaur that, for some reason, is living in the hills) that eventually it forgets its supposed to be a monster movie and settles into the groove of being a Western. It's during the climax, when Enrique puts his big, cattle-rustling plan into play, that the best reveals himself. Instead of a big fight between Jack and Enrique where the two settle their dispute as men (and learn a lesson in the process), the beast arrives, does his thing, and robs the film of a satisfying conclusion.

The beast of The Beast of Hollow Mountain is so utterly unnecessary to this film. Sure, it's a feat for the era that the producers were able to stitch a stop-motion dinosaur into this film but that doesn't mean they should have. Not only were the effects not up to the kinds of action the producers wants for their climax, but there was a perfectly good movie going on that the beast totally destroys. Once the beast shows up everything else is cast aside to the point that once the beast is bested, the film just ends. No character resolution, to hand shake between hero and villain, and no kiss between jack and Sarita to show he won her hand. The beast dies and then it's "The End". Film's over, go home.

Seriously, the film is so disinterested in the beast for most of the run time it doesn't even bother to explain what a dinosaur is doing in the Old West. How is a dinosaur still alive? Why is it called "Hollow Mountain"? Are there other dinosaurs out there or is this the only one? By including the dino in the film it just raises more questions -- questions, of course, the film in no way is prepared to answer. On of the big parts of a monster movie is establishing why the monster exists, but this film doesn't bother with that. It'd rather tell a Western than a monster flick, which is fine. Just don't include the monster! 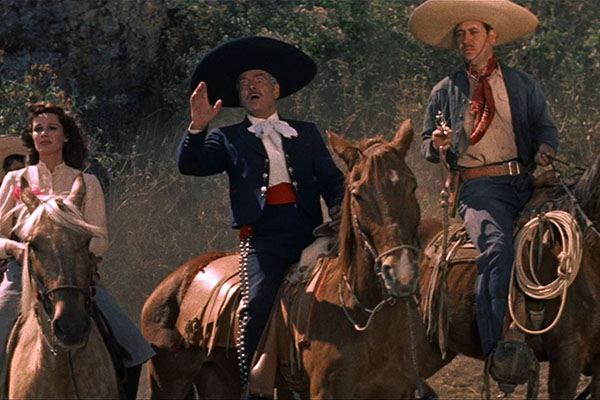 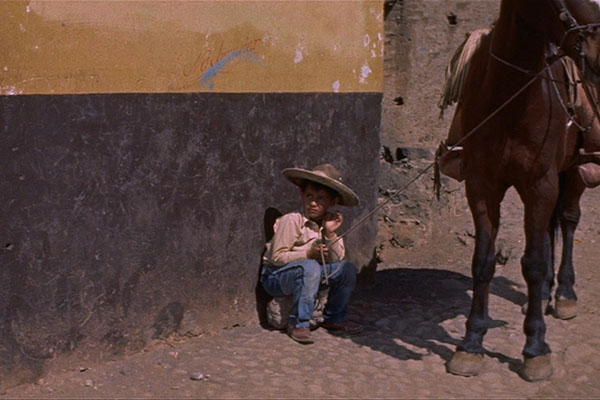 In that regard, then, we can easily see why MST3K covered this movie. It's a film called "The Beast of Hollow Mountain" where the beast doesn't even show up for two-third of the movie. It's a film that actually could have been pretty good if the creators had just been willing to see they didn't need a monster in it at all. Maybe it wouldn't have been as special -- just another Western among many others -- but it also wouldn't have completely crapped the last act either.

The Beast of Hollow Mountain is two-thirds of a pretty decent 1950s Western. Just know going in that once you hit that last act you'll absolutely need the MST3K guys to help you through it. Up until then, though, they're just delightful filler, a few extra people in the audience with you getting along with an moderately decent little movie.