Do You Want To Buy A Chevrolet?

For those that have been reading these Mystery Science Theater 3000First aired on the independent TV network KTMA, Mystery Science Theater 3000 grew in popularity when it moved to Comedy Central. Spoofing bad movies, the gang on the show watch the flicks and make jokes about them, entertaining its audience with the same kind of shtick many movies watchers provided on their own (just usually not as funny as the MST3K guys could provide). It became an indelible part of the entertainment landscape from there, and lives on today on Netflix. episode reviews as they come out, yes we are bouncing all over the series. I'm at the mercy of archived episodes on NetflixOriginally started as a disc-by-mail service, Netflix has grown to be one of the largest media companies in the world (and one of the most valued internet companies as well). With a constant slate of new internet streaming-based programming that updates all the time, Netflix has redefined what it means to watch TV and films (as well as how to do it). and that streaming service doesn't have their episodes in any particular order (and randomly changes the episodes out without warning). I'm going down the list of the episodes provided, but that does mean we get to jump all over the place as we go through these, from Joel to Mike and back again. 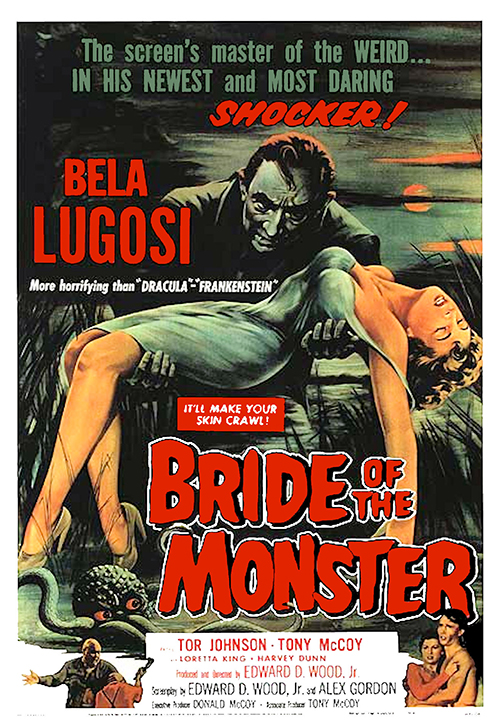 It also means that, for whatever reason, we have back-to-back Ed Wood films to go over, having just watched The Sinister Urge from season six of the series. It's hard to say this film is any better or worse than the previous Wood cinematic disaster we covered -- it's just as tedious as that other film, if not more so, yet it's not as cringe-worthy when it comes to its subject matter. This is just a normal monster film, no moral panic included, which means we can only judge it based on its content. But there's just so much to judge!

But first, Hired! We actually got to see the second half of this short already, back when we watched Manos: The Hands of Fate. But with Manos there was simply so much to unpack with that movie I didn't even bother discussing the short in the process. So let's do all of that here covering both Part 1 (that came packed in with this episode) and Part 2 (with Manos).

in the first half of "Hired!" we see a young salesman, Jimmy, brought into the fold at a local car dealership. He tries to go around, door-to-door, getting people interested in a Chevy and bring them into the dealership to make a sale. He fails, though, and his boss thinks he's suddenly a bad salesman and a bad hire. In the second half, though, the boss is set straight by, of all people, his father. He realizes he needs to be more hands on with his employees, give them one-to-one training so they can learn to harass people daily properly and really pound them until they get the sale.

While the MST3K crew is pretty good with these shorts, the real humor comes just from how anachronistic these shorts really are. Door-to-door car sales just doesn't happen anymore. If anyone went door-to-door with car information, most people would ignore them immediately. Plus, if a salesman was this pushy, hounding a family day after day to get a sale, they'd more than likely turn them off from a sale ever. Also, let's be honest, no one wants a Chevy. They suck.

Now on to the Ed Wood madness. Normally I like to recap the story of the films I watch but, in all honesty, I'm not sure what the plot of this film really was. It's an Ed Wood joint which means its ploddingly paced and put together with half-assed consideration, so despite watching the movie very little of the actual story sank in under the mind-numbing badness I sat through. To the best of my recollection, a mad scientist (Bela Lugosi) and his man-made monster (basically a play on Frankenstein's Creature without any of the gusto) live in an old mansion atop a hill. Over the course of the movie various passersby come to the mansion and, systematically, are killed by the mad doctor, his creature, or the squid-monster they have living in their basement. Eventually a pretty woman wanders into the film, is captured by the creature, and then has to be saved by a big, strapping man. End scene.

In some other movie, like any of the Universal classics, the threadbare story would be used to at least showcase interesting (for the time) effects, thrills to drive asses into seats (such as the weird but certainly technically proficient Bride of Frankenstein). Ed Wood, though, had neither the budget not skill for technical proficiency so the threadbare monster story on display here gives usu nothing to work with. Sure we have a creature the doctor built, but he's really just a guy with some bad makeup on, and we do have a rubber squid creature, but that poor special effect isn't good enough to elicit any thrills at all. 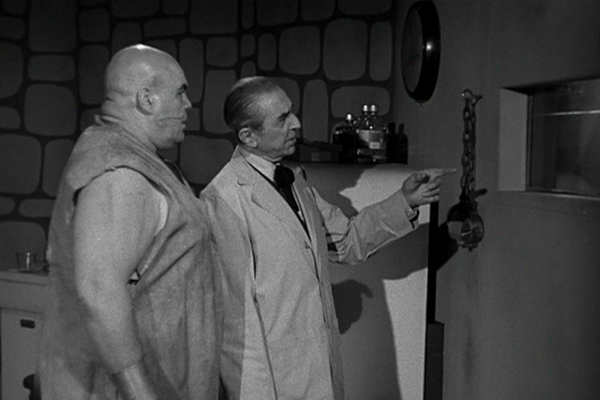 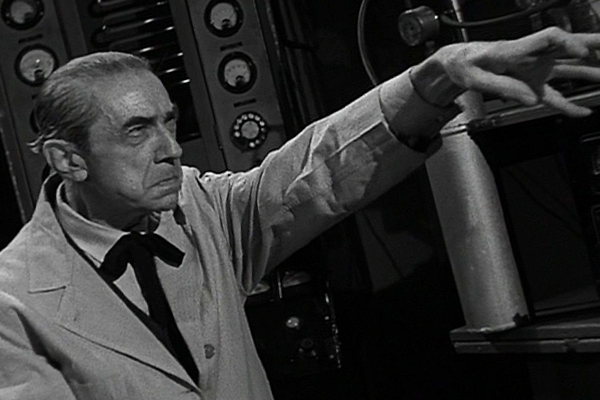 Seriously, the special effects on display in this movie are just bad. The squid monster is beyond limited in its capabilities; despite racking up a decent body count in its own right, the rubber creature has no points of articulation. To "kill" someone the actor has to jump into the water with the creature, thrash around a bit, throw a tentacle over themselves and then, right at the point where the creature would do its business, the camera will cut away. That's the extent of the thrills we get. I understand Ed Wood is a bad filmmaker, but this is just boring. There's no fun to be had in effects this terrible.

Worse, of course, is the fact that Wood only hired the cheapest actors for his no-budget films. The acting this time around is beyond wooden, with the sole exception naturally being Lugosi. This film was made during the height of the collaboration between Lugosi and Wood (after they grew to be fast friends), and Lugosi gives his all in this movie. There isn't much for him to do, and his character is just as poorly written as everyone else in the film, but at least it looks like the actor is having fun. The one bright, shining part of this movie for us to latch onto, so I'll take it.

I clearly wasn't the only person struggling to enjoy this film as Joel and the bots also seemed utterly bored by the proceedings. They were trying, I give them credit, but barely anything they said during Bride of the Monster provoked even a mild chuckle. This film was bad enough to defeat our hosts, which is saying something. They brought their A-game to Hired! and then had to call it quits afterwards.

People enjoy Ed Wood's movies; they watch him for the "so bad its good" reputation his movies have garnered over the years. Having now sat through two of his movies I have to question why people are so into the filmmaker's oeuvre. These two were all I can take and in the future I'm going to try to avoid his films no matter what. Of course, having said that I'm sure there's another one just waiting for me in the MST3K back catalog. I seriously hope I'm wrong.