This Island Earth Can Be Yours If the Price Is Right

Growing up in the 1990s I, of course, watched Mystery Science Theater 3000. The show was a fixture on the Comedy Channel/Comedy Central, and since I had cable and nothing better to watch while I was goofing off in the living room, MST3K was put on. It was amusing enough, but I will admit that I didn't really get hooked by the show -- had other things been on I would have (and likely often did) watch them instead. 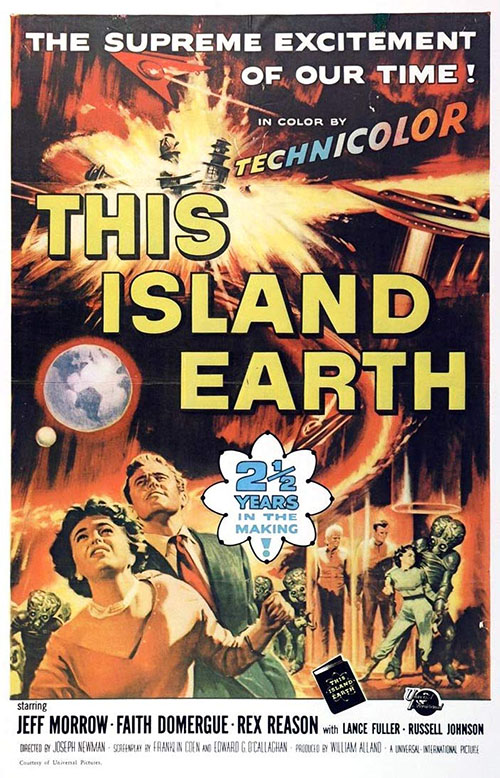 The first time I ever really got into an MST3K production was The Movie, a theater-exclusive production meant to build off the popularity of the original series. I don't know why Universal expected this to be a hit -- it's not a bad episode of MST3K, certainly not, but the proposition of paying five to ten bucks for what you could essentially already watch on your TV at home was a hard sell back in 1996. The movie was mismanaged, mis-advertised, and bombed in theaters. As far as any non-MST3K fans would know, it vanished without a trace.

I was one of those people. I knew the movie existed, but I didn't bother going to see it when it was released and all but forgot about it after that. My sister, Mab, though loved the movie. She used to rent it all the time and, while we were both in college, she forced me to watch The Movie. And yeah, I was then kicking myself for skipping out on the film at the time of its release.

Like any episode of Mystery Science Theater 3000First aired on the independent TV network KTMA, Mystery Science Theater 3000 grew in popularity when it moved to Comedy Central. Spoofing bad movies, the gang on the show watch the flicks and make jokes about them, entertaining its audience with the same kind of shtick many movies watchers provided on their own (just usually not as funny as the MST3K guys could provide). It became an indelible part of the entertainment landscape from there, and lives on today on Netflix., The Movie takes a relatively obscure and little-loved film -- in this case, the 1955 Universal film, This Island Earth -- and proceeds to jokingly crap all over the film. In between bits of the movie, the host (Mike Nelson) and the Bots (Crow and Tom Servo) will exit the theater to do little skits. It is, in all respects, everything you naturally assume would happen in an MST3K episode.

The joy of The Movie is that this is one of the few instances where the production studio that made the original film, Universal, was also in charge of the series. As such, the MST3K team had access to a lot of props from the original film that they could access. It's goofy, but fun, to see the guys using things we actually just saw in the film-within-a-film, giving the movie a more connected feel between movie-and-skits than other episodes of the series. 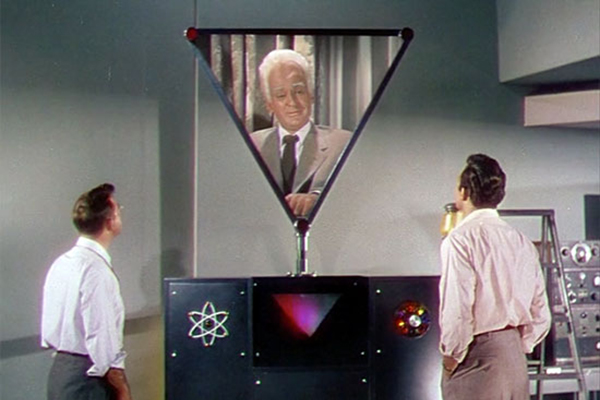 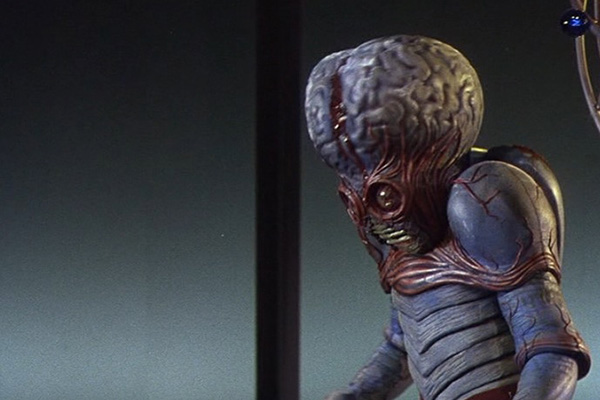 That said, stories indicate that Universal wanted a little more control over the production. The film had to be kept to a very quick 73 minutes for some reason. Also, reportedly, many jokes and skits were cut due to censorship from Universal. How much this affected the final cut of the film, and what might have been different (or edgier) is hard to judge at this point. Still, it would have been nice to see the version of the film the MST3K team really wanted to make.

The film we got, though, is an absolute blast. This Island Earth is a pretty cruddy movie, a film where barely anything really happens and the same exact events for the whole movie would have played out whether or not the main hero, Cal Meacham (Rex Reason) showed up or not. He literally does nothing of consequence at all, and every evil alien and bad monster that shows up dies by their own hand, essentially.

In the film, Cal is a nuclear scientist, one studying the effects of Uranium. While flying home after a conference, the engines on his plan flame out. Instead of crashing, though, his jet is surrounded by pulsing green light, a light that gently pushes him to the ground safely. Soon after, he gets a catalogue in the mail for futuristic machine parts, along with the plans to make a new-fangled device, an "Interocitor". Once Cal, and his assistant Joe Wilson (Robert Nichols), build the machine, they're contacted by Exeter (Jeff Morrow), a man (who is obviously an alien despite the humans never once noticing) who offers Cal a chance to work with a bunch of like-minded scientists on a big nuclear project.

Cal, along with fellow scientist Ruth Adams (Faith Domergue) soon figure out that there's something fished about Exeter and his fellows. They try to escape but are captured by Exeter's alien ship. They're then whisked away to Metaluna, the home of Exeter's people, where they find out that Metaluna is dying and the Metalunans need a new home to get to: they plan to use Earth. Cal and Ruth escape, with the help of Exeter, flee the planet right before it dies, and head back to Earth, presumably never to speak about anything that just happened again. 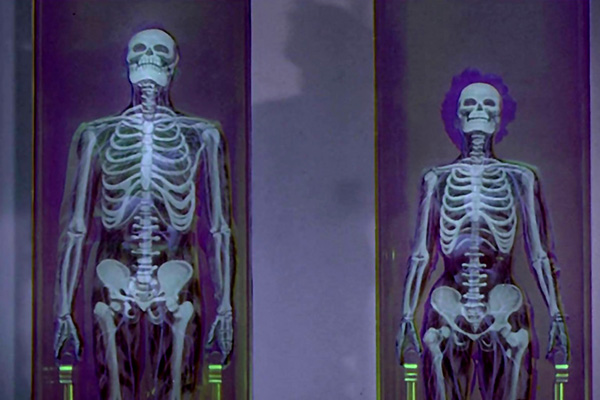 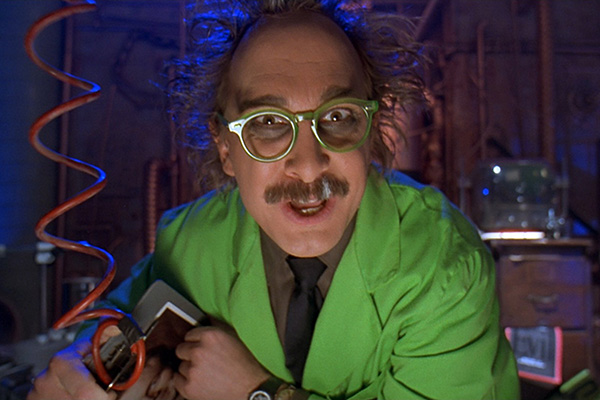 So yeah, this movie is terrible. While it was probably visually stunning for 1955, decent effects can't help save a movie where nothing happens and nothing is ever really resolved. If Cal hadn't gone to meet with Exeter, the aliens still would have gone back to their planet, Metaluna still would have been destroyed, and everything would have worked out exactly as it did. What's the point of a story like that?

But then that's the exact kind of film MST3k loves to rip into. The movie has so many good jokes, so many great lines, that I've found myself quoting it time-and-again in the years since. While I agree with other MST3K fans that the jokes in The Movie may not fly as often as in some of the regular episodes, without that familiar rapid-fire, thrown everything at the wall mentality, the jokes here are stronger and often better than in the series. It's a quality over quantity proposition.

I also like the skits here, how they largely tie into the movie the guys are watching and have their own little plot. Mike and the bots are strongly inspired to escape the ship and we see multiple attempts to get free throughout the movie. They're all pretty amusing, although I will fully admit I enjoy the opening scenes of Crow trying to tunnel through space the best.

Overall, Mystery Science Theater 3000: The Movie is one of the better productions for the series. It's got a decent(ly terrible) film to mock, a lot of great jokes, and pretty solid production values. There are some episodes of the main series that are better (which we'll hopefully get to over the course of my diving through the episodes), but The Movie could easily make my Top 10 list for the series any time. If you haven't ever watched MST3K before, this film is a good introduction to the series, a way to get into the antics with a strong opening salvo.