Why You Call Me "Beast"?

You know a film is short when the Mystery Science Theater 3000First aired on the independent TV network KTMA, Mystery Science Theater 3000 grew in popularity when it moved to Comedy Central. Spoofing bad movies, the gang on the show watch the flicks and make jokes about them, entertaining its audience with the same kind of shtick many movies watchers provided on their own (just usually not as funny as the MST3K guys could provide). It became an indelible part of the entertainment landscape from there, and lives on today on Netflix. crew has to pad for time with not just one short film but two. I'm used to them playing one short before some films -- I can attest that many classic monster movies from the bygone era (like the Universal Monsters films, for example) are short enough that, today, they'd be considered TV episode length. For a show that has to fill 90 minutes of so of material, a very short horror film requires a bit of padding to make it work. This is the first time I've ever seen the show have to break out two shorts to make up the lost time. That's pretty amazing, in a sad kind of way. 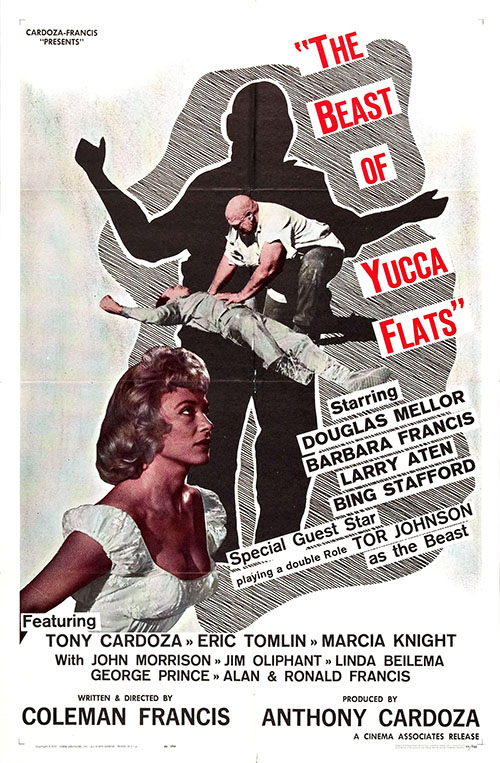 Oh, and the film, The Beast of Yucca Flats, is also really terrible, but we'll get to that momentarily. Let me just note that the short films are the high point of this episode. It's all downhill from here.

We open with a classic 1950s PSA, "Money Talks", which follows a young, dumb kid as he tries to figure out why girls don't like him and he never gets to do anything fun. That's when, while doing his homework, the specter of Benjamin Franklin comes to him in a dream. No, one of our Founding Fathers didn't show up for a little sexy time (although, let's be clear, Benny was a voracious sex-fiend -- look it up). Instead, Ben is there to talk to our "hero" about money. It seems the dumb snot likes to spend his hard earned cash (which he earns doing odd jobs around town) on stupid stuff, like fast food and comics. If he only spent his money more wisely, Ben notes, our young buck would have the money to buy tickets to the dance and take the girl he likes out (instead of her laughing at him while all the boys give him a wedgie).

The short is your typical fare from the era: kid has a problem and then some narrator shows up to talk them through their issue. This one is notable because it's not often the narrator actually physically shows up, but they than also gives this short a creepy vibe. "The shadow of Benjamin Franklin watches you while you sleep, little Jimmy." That's a big far, and obviously not something the producers of this film figured people would think (although I thought it the second ol' Ben showed up, and the MST3K guys weren't far behind me on that count).

Plus, honestly, the advice the movie gives isn't all that great. Jimmy (which might not be the kid's name but he's stuck with it now) gets a couple of bucks a week and his dad won't lend him any more. Ben advises Jimmy to make a budget and start socking away money he doesn't need to spend for future expenses. It's a great idea, in theory, if Jimmy were an adult and had a real, weekly salary. But Jimmy is dumb, and young, and poor, so telling him to "just save your money" is like admonishing poor people for "just not trying harder." What is Jimmy actually supposed to do, guys? Sell a kidney?

Remember, he wants to take a girl to the dance, now. Even if he sets aside weekly money after this PSA, he's basically shit out of luck today. You got the cash for Jimmy, Ben? No, because you're a shadow! So after Ben tells Jimmy to save up and to stop begging cash off his dad, Jimmy then tells his dad about his plan... and then begs cash off his dad. You undercut the message of your PSA! Good moral, there, guys. Well done.

The second PSA, though, is the true highlight of this whole episode. Titles "Progress Island USA", the film is all about Puerto Rico, how it's a bustling economy, a great destination for tourists and businesses, and how it's the most American territory to ever join with the Union. Yeah, so... that didn't exactly age well. Considering the current politics of our era, and how much the Trump administration has screwed over Puerto Rico (after the hurricane and the devastation), this PSA is eye-opening. The place used to be real nice until our President fucked it up.

Beyond the current political climate, though, this PSA is also just a marvel. Built out a stock footage of Puerto Rico, the short is, start to finish, an ad for the territory to lure people into visiting (or moving) to the island. For a 1960s video it's actually not bad, with zippy editing and a lot of information that it conveys quickly. Maybe not too quickly, I will admit, as the PSA does kind of drag on by the end of it. We get it, Puerto Rico, you used to have a lot going for you. Damn, though, did you have to show us everything?

This PSA does give Mike and the bots a lot to work with though, and it was absolutely hilarious start to finish. This is one of those shorts I would happily look up Online again just to watch on its own. The same, though, can't be said for the movie to follow...

Ugh, so, in this movie we have Joseph Jarovsky (Tor Johnson), a Soviet defector with secret information about Russia's plans. He comes to America to talk to U.S. agents, but he's pursued by Soviet agents who try to kill him. He manages to escape, stumbling away into the Yucca Flats, only to get irradiated by a nuclear test explosion. This leaves him a ravening beast, barely human, so, obviously, he goes around attacking anyone that travels near the Flats, strangling them and leaving their bodies for the authorities to find. Which they do, and then they chase after the Beast to put him down because no one strangles drifters on this lonely stretch of highway and gets away with it.

And, yes, that's it. That's the whole plot of the movie. A some point a family randomly wanders in, get chased around by the Beast, and then eventually the Beast dies, shot to death by cops. There's no exploration of how the nuclear radiation affected the Beast, no tragic story about his past or his future, about someone he once loved and that's why he's going after people, killing them. Nope, this is a total B-movie monster flick where the "monster" in this case is just a really big dude hit by radiation to end up... looking exactly like he did before. It's a really cheap, crappy kind of movie. 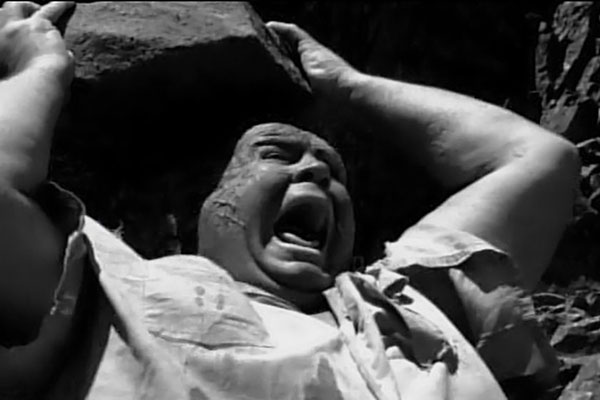 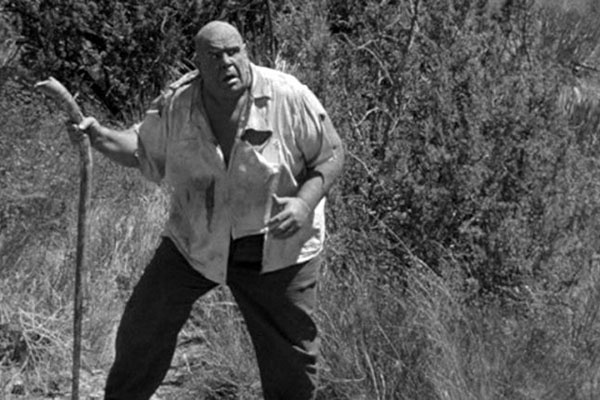 Frankly, this movie is just bad. It's bad in the same way Manos: The Hands of Fate is bad, with long, tedious shots that go on forever and don't contribute in any meaningful way to the film. This movie just drifts, endlessly, like the people the Beast slaughters, but unlike those lucky folks we just have keep on enduring this awful movie until it kindly, gracelessly, comes to a close.

About the only nice thing I can say about this film is that it's at least shorter than Manos. That's it. Not even the MST3K guys can save this one as it's so long and boring even they run out of steam. It doesn't help that they followed "Progress Island USA", in which they were genuinely funny, which this dreck as The Beast of Yucca Flats looks even worse by comparison. I'm certain nothing could have saved this movie as even Mike and the bots seem at a loss as to how to make this watching. It's just, at it's core, a terrible film and I'm glad it was only half of the episode because if this had been any longer I'm pretty sure I would have had to turn it off half way.