Today the Part of Low-Rent Conan Will Be Played By...

Roger Corman is a prolific film producer. While he made a few films (directed his fair share of products), his production company made vastly more, all made on the cheap, and generally to varying quality. Very few of his movies lived on with any kind of fame, and those that did (like Death Race 2000 did so for goofy ideas and go-for-broke creativity than due to any kind of quality). It's hard to say any Roger Corman movie, whether directed by the man or just produced by him, is good but certainly the ones he was only attached to as a producer are generally not as good as his own output. 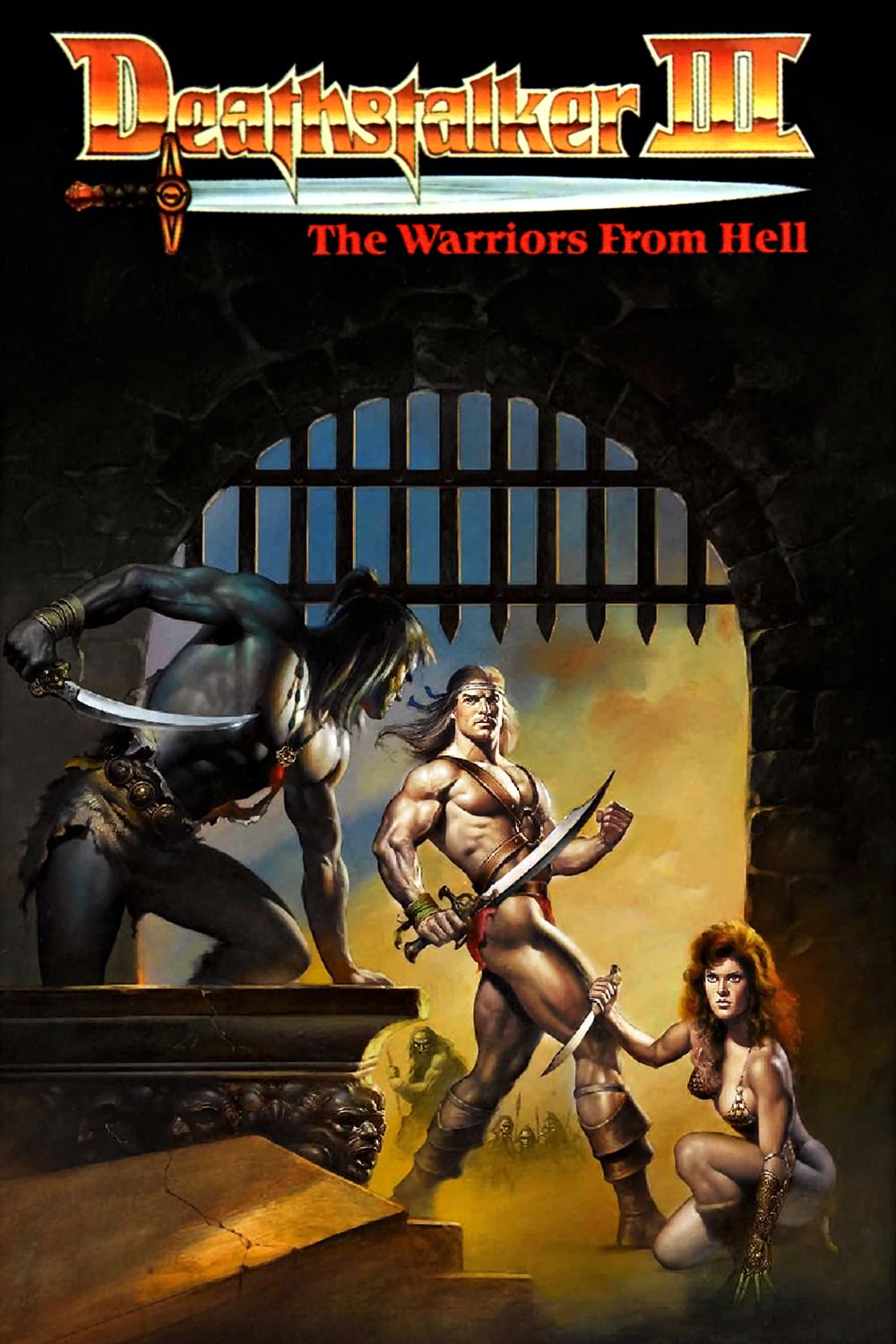 Such is the case with Deathstalker and the Warriors from Hell, the third film in the Deathstalker series (and, believe it or not, there are four of these films) created as part of a co-production between Roger Corman's company with Argentina. In case you were wondering, another one of the films made during the Argentinian phase was Wizards of the Lost Kingdom, another terrible film we had to suffer through). While the original Deathstalker film went on to achieve cult status and be a tidy little financial hit, the power of that swords and sorcery series was greatly diminished by this third film (if it ever really existed at all).

Our adventure opens at a quaint little festivity for a nearby town (town not shown, it should be noted). The villagers are having a gay old time, feasting and jousting and carousing. This includes having their fortunes told by local wizard, Nicias (Aaron Hernan). During the festivities, Nicias is visited by Carissa (Carla Herd), a princess without a kingdom looking for aid to defend her people. She has one half of a magical gem and she wants Nicias's aid in somehow finding the other half. At just this moment, though, the festivities are attacked by the forces of Troxartas, an evil wizard with a sprawling kingdom far to the south. Troxartas wants the gem so he can pair it with the other half and have unlimited magical power and use the gem to track down a city of gold that it, somehow, is also the map for. Defending Carissa is Deathstalker, our hero and sub-level Conan for today's adventure. He sweep Carissa off while the town is attacked, with promises to Nicias that he'll defend her at all costs.

This is a task, it should be noted, that Deathstalker immediately fails -- while on the road Deathstalker and Carissa are ambushed and Carissa is killed. This leaves Deathstalker as the only one that can protect the gem, which is does by traveling into the belly of the beast, Troxartas's kingdom. There he finds the betrothed on the evil wizard, Princess Elizena, twin of Carissa (and also played by Carla Herd). He also meets Marinda, a warrior lass who, for reasons that defy their lack of chemistry, our warrior immediately falls in love with. Together, these three will have to find a way to get both halves of the gem together and stop Troxartas at all costs.

I wish I'd seen the first Deathstalker before diving into this version just so I could know what a "good" version of one of these flicks looked like. Something tells me it was also pretty bad (as all Roger Corman films generally are), but I have to hope it was somehow better than this movie. I'd at least like to have had that movie in the old memory bank so I could do a comparison between the two. I just want to know how much worse this film was than the original because, yeah, it's not very good at all.

For starters, the film has a ramshackle plot that meanders and just kind of happens around the characters. This is a critique that could be levels at the other two Corman sword and sorcery flicks we've already reviewed (both Wizards of the Lost Kingdom and its sequel). In all those cases, including Deathstalker III, the film is basically a quest for a McGuffin that makes little sense and only exists so all the random scenes the production could afford to film has some kind of direction. "We're going to wander this kingdom, meeting random people, because somehow it puts us in the direction of the other half of this poorly explained mystical gem."

That's not to imply that any of the scenes in this movie are interesting. They aren't. They all simply exist to waste time and pad the story. There's about 10 minutes of actual plot -- Deathstalker has a gem, he has to go to Troxartas's castle to steal it and then kill the wizard -- and a good 80 minutes of pointless scenes that add nothing and do little more than distract the viewer while they numbly sit waiting for something, anything to happen. Again, just like basically every other Corman film we've discussed do far for this column. 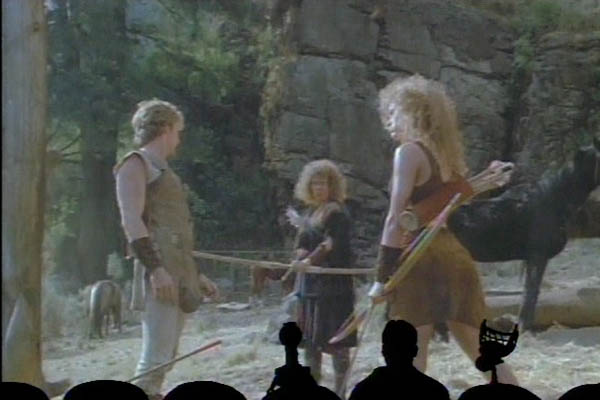 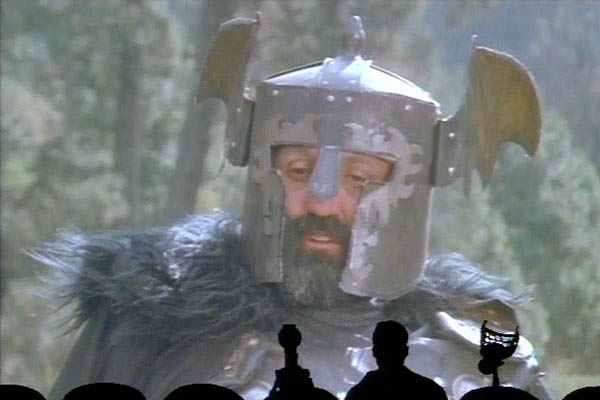 Of course, this film also has all the other Corman tropes we've come to expect. That starts with the performances with are mediocre at best and laughably bad at worst. John Allen Nelson, this movie's Deathstalker, comes across best in the film as he at least shows some inkling of what constitutes actual acting. His Deathstalker isn't great, basically a smiling cad with a sword, but he's enjoyable enough to watch... at least when the film doesn't try to get him to do melee combat (he's laughably bad at it). Certainly he's miles about his co-star, Herd, who seems lost in either version of her role, either as Carissa or Elizena. He way to act as the characters is to show little to no emotion and just hope reciting lines will get her through the movie (spoiler: it really doesn't). Meanwhile, Thom Christopher's Troxartas is outmatched by his accomplice, Terri Treas's Camisarde, who has all the charisma and style Troxartas lacks. If the film could have just been Deathstalker battling Camisarde, it would have been much more watchable.

Bear in mind this is supposed to be an action film but, due to the limitations of not just the lead actor but everyone else in the movie, the action scenes are laughable at best. More often than not the melee combat is just sad to watch, like two kids swinging at each other with sticks while, at the same time, holding their faces out of the way so they don't get hit when the sticks rebound. It would take a lot of practice and training for anyone in the film to look competent performing their stunts. Actually hoping for thrilling stunts in this "epic" would require a completely different film.

The thing is that this is by no means the worst film I've watched from the complete Mystery Science Theater 3000First aired on the independent TV network KTMA, Mystery Science Theater 3000 grew in popularity when it moved to Comedy Central. Spoofing bad movies, the gang on the show watch the flicks and make jokes about them, entertaining its audience with the same kind of shtick many movies watchers provided on their own (just usually not as funny as the MST3K guys could provide). It became an indelible part of the entertainment landscape from there, and lives on today on Netflix. run. Hell, it's not even in the top 10. It's a bad film, sure, but I wasn't so bored watching it I desperate thought about just turning it off. It's your average Corman production, bad but not so terrible you can't get through it. I doubt I'd ever want to watch it again but I also don't hold any kind of rage for it. It's completely and utterly forgettable, a there and gone swords and sorcery impact than makes absolutely no impact on the viewer, simply wasting their time.

The MST3K guys do a decent job with the film. They get a lot of good material out of mocking a helmet shaped like a bat (these jokes come regularly and are quite funny) and they also have fun pointing out the absurd details of the movie. That said, by the halfway mark it's pretty clear all their best jokes have already come and gone as the pace of the humor starts to slow. There are some good skits to break up the space, like the bots holding a Renn Faire on the Satellite of Love, but this is certainly not the strongest effort from Mike and the Bots. Overall, then, this is a mediocre movie within an average episode of MST3K. It fine, and that's about it.

I still want to see how bad the first Deathstalker is, though...