It's been a while since I last reviewed an episode of Mystery Science Theater 3000First aired on the independent TV network KTMA, Mystery Science Theater 3000 grew in popularity when it moved to Comedy Central. Spoofing bad movies, the gang on the show watch the flicks and make jokes about them, entertaining its audience with the same kind of shtick many movies watchers provided on their own (just usually not as funny as the MST3K guys could provide). It became an indelible part of the entertainment landscape from there, and lives on today on Netflix. -- watch enough of these back to back and you end up needing to take a break because, wow, these films can be hot garbage -- but I was lured back in to watching an episode because of the recent MST3K stay-at home special. The guys from the touring live show got together to rewatch an old episode of the series, for some reason picking episode 11 from the very first season, and they were going to heckle their own material. We'll get to that particular adventure in a bit, but I felt like before I attended the live rewatch I needed to see the original film. 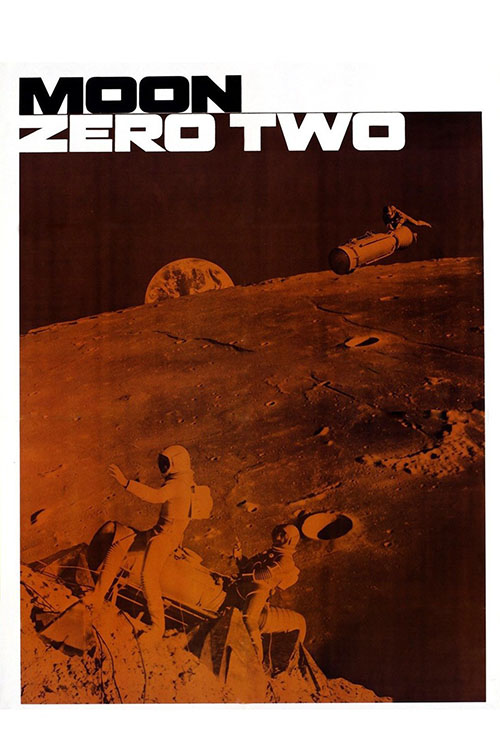 Honestly, it's not as bad as I was expecting. I will admit I'm a special case in this regard, not just because I've watched a fair bit of MST3K at this point but because I have a deep love of Hammer films. Hammer, the company behind so many of the monster films from the 1960s and 1970s (many of which I've watched and reviewed over on my Castlevania site, The Inverted Dungeon), also produced today's fodder, Moon Zero Two, a slice of 1960s trashy sci-fi, and while critics at the time savaged it (and most people hate the movie), I admit I actually kind of enjoyed it.

Don't get me wrong, the film is bad. But it's bad in a goofy, lovable way. It tries hard at times, as many Hammer films would, without ever quite hitting the mark. And yet it has this campy vibe, like many episodes of Star Trek: The Original Series, and it does so in a setting that might have been believable once, decades ago. It's dumb and silly and not good, but lovable all the same.

There are two main plot lines in Moon Zero Two, both of which interconnect at the end (a bit ham-handedly, I will admit), and both featuring Capt. Bill Kemp (James Olson), former astronaut who now works out of the Moon as a salvage operator. In the years since man first set foot on the Moon the various countries of Earth banded together to build Moon City on its surface (as illustrated in a very campy and silly opening animated sequence), before they went off to explore other planets in the solar system. Kemp was, in fact, the first man to set foot on Mars, and then he retired because he felt at odds with the world governments and tired off their foot dragging. All he really wants to do is be the first to set foot on Mercury (as both Mars and Venus are now populated), but that seems like it'll never happen, so he hangs out on his aging ship, hauling junk around the moon and biding his time.

When J. J. Hubbard (Warren Mitchell), the richest man on the Moon, comes to Kemp with a job, the captain is intrigued. The mission is to fly out to a asteroid, one that Hubbard has been tracking, and crash it into the Moon. Why? Because it's actually a single, solid, six-ton sapphire and Hubbard is willing to pay a ton to get it. While Kemp helps get the asteroid aimed and ready to land he's also helping Clementine Taplin (Catherine Schell) find her missing brother, a miner who went to the Moon two years ago, found a big claim, but hasn't been heard from in months. Clementine fears the worst. SO, of course, Kemp helps her and discovers that the site her brother had mined was the exact spot Hubbard plans to crash his asteroid. And it's pretty obvious from there what happened to the brother and who this will all play out from there. 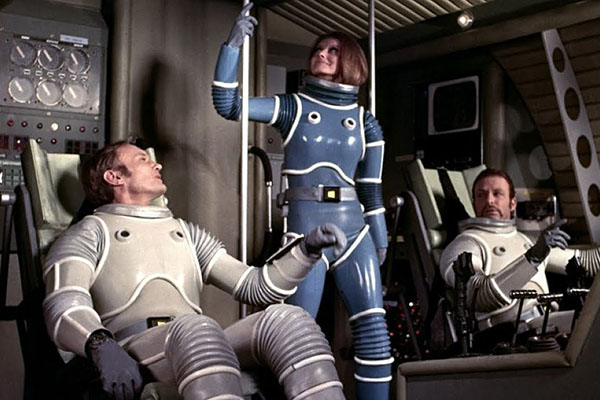 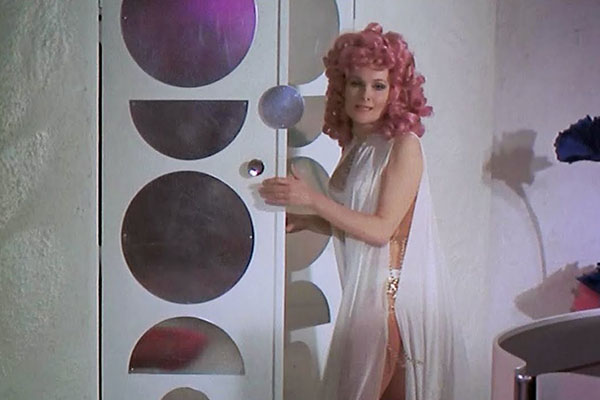 I will admit the story of Moon Zero Two is pretty bad. Hubbard is such an obvious villain you're constantly expecting him to double-cross Kemp from day one. Clementine's story drags on forever without going anywhere, meaning you're left wondering why the movie is focusing so much time on it when we have a space adventure on an asteroid we could be focusing on instead. Then when it finally does come together it's just so pat -- of course Hubbard killed Clementine's brother so he could have the guy's land, and of course it has to be Kemp who is both working for Hubbard and helping Clementine. There are a good dozen characters in this film, with dozens more extras, and yet the film really does gravitate fully around these three characters. That's just bad writing.

And yet, at the same time the film does have its charms. It's a very 1960s movie, with all the weird bad "futuristic" fashion and go-go dancers that implies. While others would probably hate that, I liked the campiness of it, how it created this silly, almost comic vibe when going back and watching it now. I'm sure that wasn't intended at the time (although even critics watching it back in the 1960s weren't sure if it was supposed to be a comedic movie or not) but it's certainly amusingly dumb in its aesthetic now, in a way I could get into.

The characters, too, aren't all that great. They're all tropes, underwritten without much depth. The only style Kemp and Clementine have is from their actors, Olson and Schell respectively. I liked the two as they were both charismatic in their own ways -- Olson laconic, like a 1960s cowboy, while Schell was eager and vibrant -- but they're betrayed by they cookie-cutter characters. They act their parts well but there's nothing special about their characters, nor the direction the story takes them.

And do I come around back to my main point, which is that I recognize this is a bad movie, poorly written, weirdly put together, with pacing that's all over the place on a story that really fails to deliver. It does deserve to bad movie lists and ridiculed by MST3K. And yet, that's also the case for so much of Hammer's horror and sci-fi output and I enjoy so many of those shitty movies simply for what they are. This is another in that line of films and I got into the groove of it because it was familiar and I could enjoy it for what it was. I'm an edge case, but happily so in this instance. 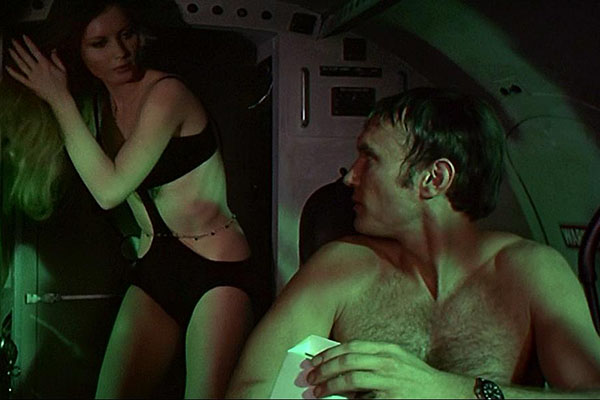 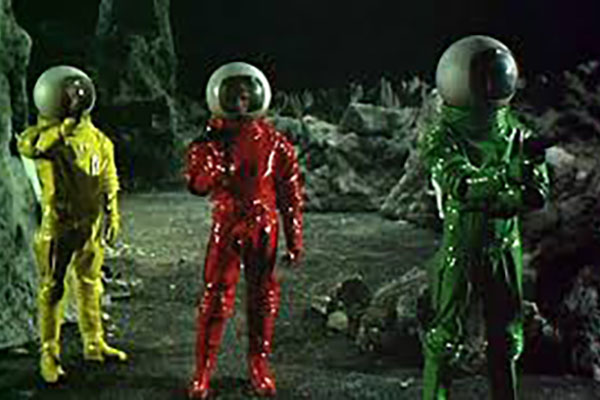 So I enjoyed the movie, but I do have to admit that as an episode of MST3K it rather sucked. This was from the first (official) season of the show and it was clear the guys were still getting their feet under them. The jokes are slow, the sets and sequences even cheesier, and nothing really comes together. That, factored in with the fact that I've never been a fan of the Joel era (always finding it more slow than then Mike and Jonah era) and this felt like the slowest of slow Joel episodes, it made for a pretty tedious time. Frankly I was happier when the hosts shut up and let me watch the movie in peace which isn't how this show is supposed to work at all.

As far as the May 3rd, 2020 live episode is concerned, I wasn't impressed at all. I tuned in hopeful that between the original material from the episode plus the new stuff the live crew would come up with, we'd have an episode that really sung -- even if they did the same amount of jokes as the original episode, that would mean double the bits, right? Nope. Instead it was like the MST3K crew was simply watching along with and, maybe once every minute or so, they'd say a quip. One. And often those weren't funny. So yeah, this special was a total bust. After a half an hour I tuned out. Such a missed opportunity guys.