Let's talk Gremlins. That film isn't one we're discussing here and yet that title hangs heavy over every frame of celluloid in Hobgoblins. Released four years prior to the terrible movie we're about the discuss, Gremlins is a film about nasty little creatures terrorizing a small town, killing people and pulling stupid pranks. It's a weird Christmas horror-comedy hybrid that, on paper, really shouldn't work and yet somehow does. The concept of making another movie like Germlins seems like a terrible idea simply because the original is so strange a goofy there's no way you could ever make it twice (case in point: Gremlins 2: The New Batch which has to go in a completely different, very goofy direction to still work). 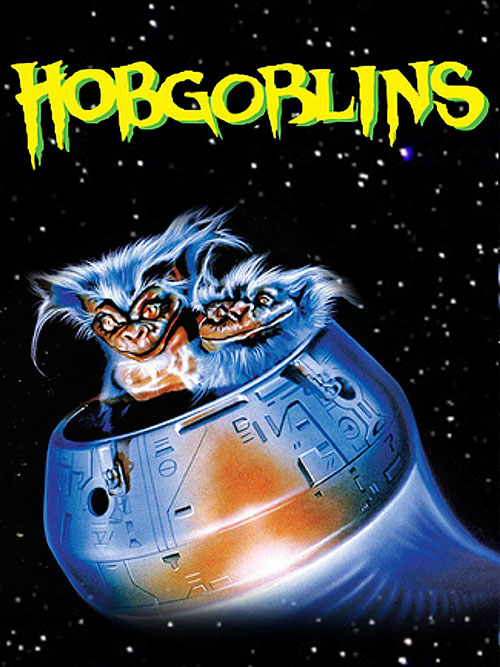 And yet yet we did get a few different Gremlins clones, like the Critters series, which I generally terrible, and the Troll films, which are even worse. And then there's Hobgoblins, the subject of this week's Mystery Science Theater 3000First aired on the independent TV network KTMA, Mystery Science Theater 3000 grew in popularity when it moved to Comedy Central. Spoofing bad movies, the gang on the show watch the flicks and make jokes about them, entertaining its audience with the same kind of shtick many movies watchers provided on their own (just usually not as funny as the MST3K guys could provide). It became an indelible part of the entertainment landscape from there, and lives on today on Netflix. article. Hailing from the ninth season of the series, our episode finds Mike (having take over from Joel a while back) and the bots watching this wretched movie and trying, desperately, to find anything funny to say about it. Hobgoblins though, defies all attempts at entertainment, without as well as within, rightly earning it's place as one of the worst films ever made.

In the movie we find two security guards, McCreedy (Jeffery Culver) and Kevin (Tome Bartlett) keeping watch over an old movie studio. Kevin is a new hire and, as the two go about their rounds, he learns that he's basically to guard every section of the lot except for one mysterious hallway. No matter what he does, McCreedy informs Kevin, he's never to go down that hallway. Why? Because down that hallways is a vault, and within that vault live the hobgoblins. Kevin doesn't know this as McCreedy doesn't actually tell him what's down the hallway, but he's soon to find out when, during an emergency, he has to go down the hallway. And then the hobgoblins get out to terrorize the city.

So let's back up for just a second and discuss this setup. The hobgoblins, as we later learn, came to Earth and, for whatever reason, settled in the studio lot to give people big dreams and feed on them. Thee hobgoblins are dream creators but, for whatever reason, they like to kill their subjects after giving them a good dream (presumably this is so they can feed on the life force but it's never explained in the movie). When people start dying at the studio, the hobgoblins are closed up in the vault, hopefully never to be seen again. All good so far, but neither the hallway, nor the actual vault, are locked at all. These are dangerous creatures and the best defense we have against them is an elder guard who shakes his fist and gives a stern warning.

So the hobgoblins get out and have the whole city of Los Angeles to terrorize. Naturally, then, they miraculously end up at the one house where Kevin's girlfriend, Amy (Paige Sullivan), and her friends Kyle (Steven Boggs), Daphne (Kelley Palmer), and Daphne's boyfriend Nick (Billy Frank), are hanging out. Kevin had to help his friends fend off the attacks of the hobgoblins and then kill ever last little pest before they can do real damage across the city. 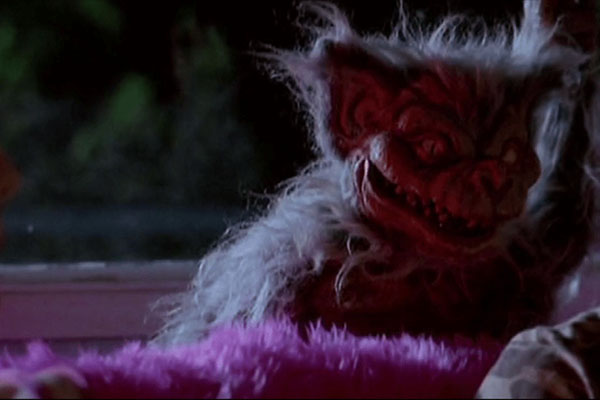 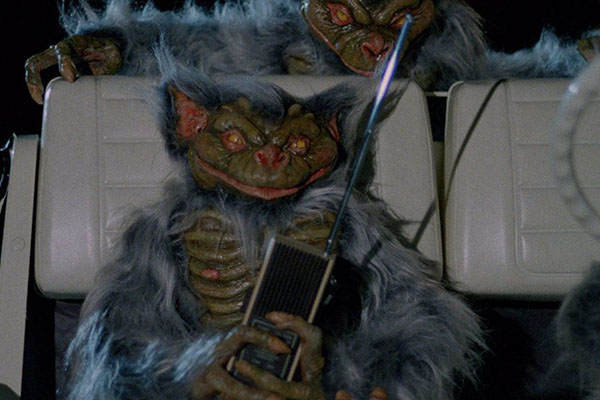 As a low budget cheapie, the film depicts the hobgoblins terrorizing the city by them showing up at all of two locations -- the girlfriend's house and, later, a night club that looks more like a rented out VFW hall. Everything in the movie happens at these two locations (and the movie studio), or on abandoned city streets in the middle of nowhere at night. It leads to the most abandoned, empty looking version of Los Angeles I think I've ever seen.

Of course, no amount of sets and locations could have possible made Hobgoblins into a good movie and the reason for that is the titular monsters. Part of what made Gremlins work was that it had fantastic creature effects that renders its monsters into realistic creatures. Each was depicted as their own character, lifelike in their own way. By contrast, the hobgoblins are essentially, one-pose stuffed animals that don't so much move as are shaken by hands just out of shot and, occasionally, get thrown at people. Sometimes creature effects people can do a lot with a little, but there's only so much you can do with these creatures and that whole list is used up in the first shot the monsters are shown. After that you've seen everything they can do.

The big conceit is that people have vivid dreams when the hobgoblins take them over. Maybe these dream sequences could have been interesting but, again, there are only three real sets in this film and every one of them has to play double-duty for reality and fantasy. Instead of elaborate fantasy sequences we just see people being dumb while everyone around them stands around confused. A better movie would have given us real fantasy sequences with new locales and different visuals for what the dream-state characters were seeing in comparison to everyone else. But then a better film would have had to budget to pull that off while this film clearly was funded by the pocket change people could scrape together.

That also explains the (lack of) acting talent featured on screen as there clearly wasn't any money in the budget to pay for people that could act. The best actor of the set in Culver and his character, McCreedy all but disappears from the film after the opening act. The rest of the time we get to hang out with Barlett's Kevin (who is marginally okay) and all his friends (who suck). Seriously, his friends give worse performances than fodder characters in slasher flicks. They somehow manage to act wooden and overact at the same time, a feat I didn't think was possible before now. And, sadly, we get to spend a lot of time with them as, despite this being a horror movie, basically no one dies. 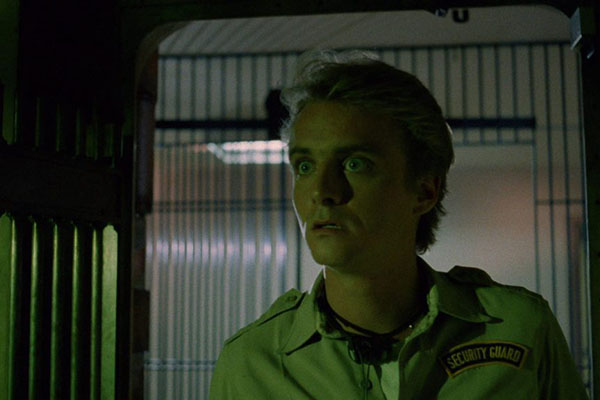 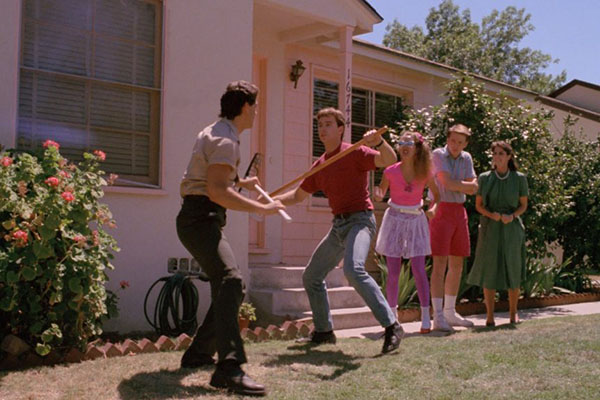 But the single worst knock I can give this movie is simply how unmemorable it is. I watched it for this article and then, the second the film was over, I all but forgot about it. For the last month I've been trying to remember what episode of MST3K I last watched and just couldn't remember. It's like the film removed itself from my brain the second I was done with it. It simply wasn't good enough, in any capacity, to remember it.

Sadly that does also go for the MST3K commentary that accompanied it. I do remember laughing a few times at the antics of Mike and the bots but absolutely nothing stuck with me. They tried but they just weren't able to bring their A-game. It simply confirms something I've said before: a really bad movie can prove to be too hard to mock. Hobgoblins is that kind of movie so do yourself a favor and, no matter which version you have to watch (original or MST3K), find something else to watch instead.