Who Got Their Battlestar Mixed Up In This?

For those reading along as I slowly dig through the whole of Mystery Science Theater 3000First aired on the independent TV network KTMA, Mystery Science Theater 3000 grew in popularity when it moved to Comedy Central. Spoofing bad movies, the gang on the show watch the flicks and make jokes about them, entertaining its audience with the same kind of shtick many movies watchers provided on their own (just usually not as funny as the MST3K guys could provide). It became an indelible part of the entertainment landscape from there, and lives on today on Netflix. it has been a while since we had any of these reviews. I will admit that I had to take some time off there for a while, after the one two punch of The Sinister Urge and Bride of the Monster. I was defeated, done in by Ed Wood and his truly shitty movies. After that I just couldn't bring myself to watch any more MST3K. Thankfully, it eventually passed so I decided to get back in by watching a movie I knew would be fun: Space Mutiny. 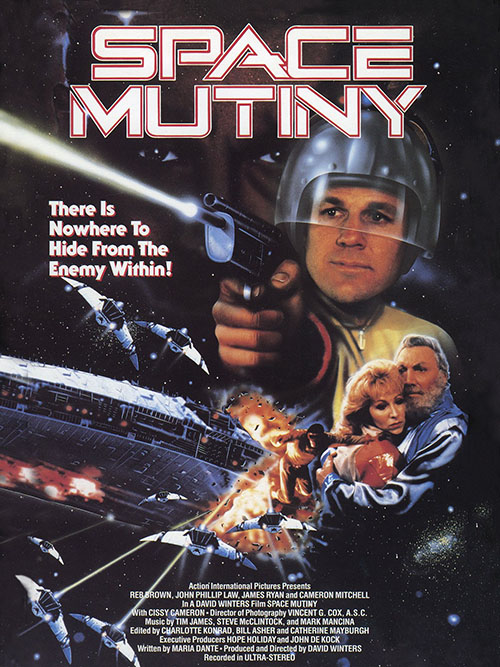 Although I didn't watch a lot of MST3K back in the day, there are a few episodes (and the movie) that I have watched repeatedly. Space Mutiny is one of those episodes; in all honesty I've probably watched it more at this point than I have MST3K: The Movie, which long held the title as my favorite work from the gang. This film has it all, inept production values, terrible editing, nonsense story, and fantastic, constant patter from Mike and the bots. If ever a shitty movie was redeemed by and episode of MST3K, it Space Mutiny.

In the film, an Earth colony ship is venturing across the cosmos searching for a new home. This trip has been going on for decades and is going to keep on going for hundreds of more years... I think. Honestly, the setup for the movie really doesn't matter much on the plot and, once you get into it, is actually directly invalidated by other things that happen in the film. Regardless, as a few scout ships are flying in to the docking bay for the colony ship, mutineers, lead by Kalgan (John Phillip Law), blow up the bay and many of the pilots within. One man does survive, Dave Ryder (Reb Brown). Welcomed by the captain of the mothership (who looks suspiciously like Santa), Captain Scott Denvers (Graham Clark), Ryder soon settles into live about the ship. He meets a girl, Dr. Lea Jansen, and stumbles into the plan to take over the colony ship. If they're to save themselves, and everyone on the ship, Ryder and Jansen have to work together to figure out the plot and stop Kalgan once and for all.

There's a lot going on in Space Mutiny and very little of it makes sense. As noted, this is a colony ship everyone works on, but there are also humans out in the stars, presumably on their own home worlds. The movie makes it out like the colony ship is the last hope for humanity but, clearly, it isn't. Beyond there, there are other aliens that look very human, like the Lemurians (psychic dancing ladies who add nothing to the plot at all but suck up a lot of screen time), who seem more than willing to work with the humans but, no, this colony ship is Earth's last hope. I'm... so confused.

Of course there's also Kalgan's plan. He doesn't want to take over the ship, he wants to cripple it. Why? It's his home too so if he destroys it he's destroying himself in the process. Clearly the guy has delusions of grandeur, but his plan -- destroy the docking bay, and then eventually the shield, the weapons, and then the engines -- would leave the ship is such poor shape that even if he took it over (which, bear in mind, he never gets close to doing), he'd be completely screwed afterwards. He's like a prankster that takes things too far and never realizes the damage he's doing in the process. 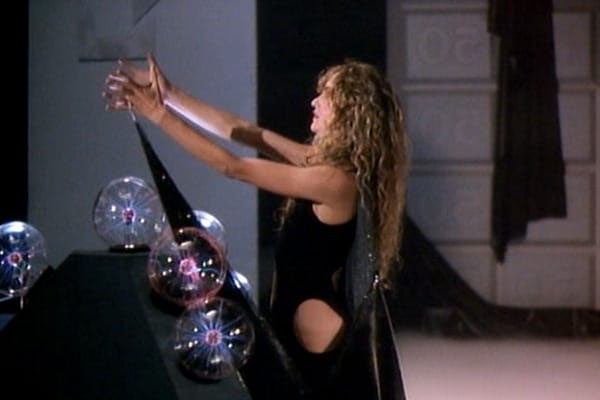 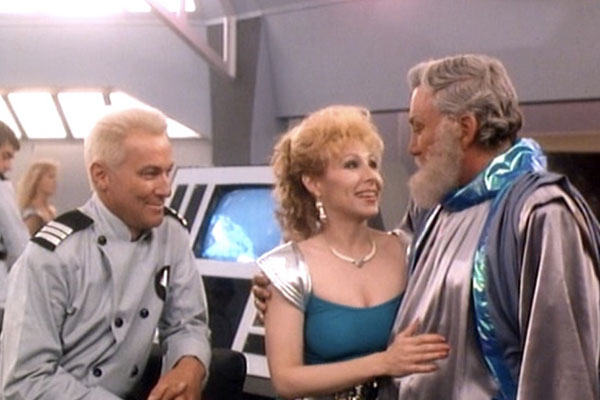 But then more of this movie might have made sense if there was anyone responsible involved in the production of the film. It's easy to point out how inept the movie is from the opening scenes of the movie (and not just because the story instantly contradicts itself). For starters, all the ship battle sequences are lifted from the classic Battlestar Galactica. I mean that quite literally -- the footage is stolen from that show, whole scenes of it, without attribution. When there isn't space footage for them to steal, the producers used low-grade wire-frame models on cruddy computer screens to try and get the job done. The lack of a budget for this "space opera" is palpable, start to finish.

Not that much of the movie takes place in space. Instead, all the scenes inside the "lower decks" of the film were shot in a warehouse. An obvious warehouse, no less, with daylight streaming through the not at all covered up windows. It's amazing how much sun you get out in space, you know? There's barely any set dressing, absolutely no special effects inside the "engine room", and just a lot of people running around, falling over railings (a constant source of jokes for Mike and the bots), and getting into low-energy fights. It's tragic how little really happens inside this ship.

Of course, you can blame a lot of this ineptness on the editing. It's pretty clear the movie is grafted together from a few different shoots, without much in the way planning done beforehand or notes taken afterwards. For the clearest example of how bad the editing can be, we have a pretty prominent member of the crew die halfway into the film only to show up for duty back on the bridge in the next scene. That's quite a literal case of continuity error there, and the best part is no one else in the crew notices this dead women just wandering around, acting like everything is okay. We notice, as do Mike and the gang, and there is much revelry to be had.

In all honesty, this movie should be completely unwatchable. The lead actors have absolutely no chemistry, with Reb Brown especially delivering a pretty flat, slab of beef performance. Nothing in the movie flows or makes sense, and then things just happen simply because. The producers had stock footage, props, and something resembling a script and just decided, "why not?" and made a movie. This was the wrong choice and, when viewing the film without Mike and the bots, it's hard to get through the final product. And yet... 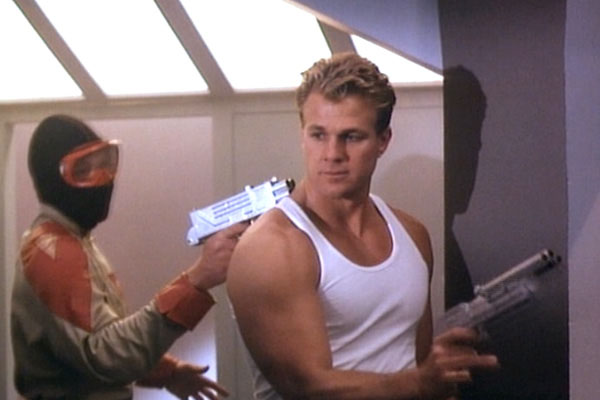 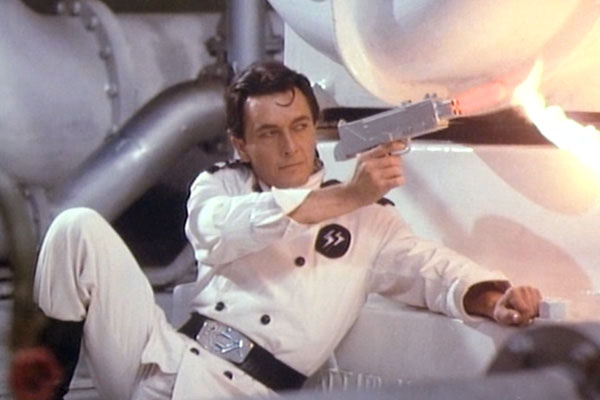 The simple fact is that the MST3K crew make this film watchable. With their constant patter, pointing out the flaw, joking about Santa on the bridge, cracking wise about all the continuity issues, the film is 100% redeemed. One of the best bits is the running gag of the guys shouting out random names from Ryder, from "Crunch Buttsteak" to "Big McLargehuge", and even when nothing else is going on in the film, these random gags liven the proceedings and make it fun to watch. Space Mutiny is a film that should be as bad as Manos: The Hands of Fate, boring and bad without any clue what a real film looks like, but because of Mike and the bots the film is so very watchable. It's bad, really bad, but it's also a film I will go back and watch again and again.

If there's any flaw with the episode it's that the framing device around the episode, featuring the continuing struggle between Mike and Forrester's Mom,, just doesn't play. The mad doctor, and her two cohorts Brain Guy and a Monkey, are stuck in ancient Rome for some reason and they need Mike to come save them so everyone can go home. It's beyond stupid and a total drag on the rest of the episode. Still, these sequences are short and very quickly the terrible movie picks back up. This is one of those instances where I much prefer the bad film over the comedic interludes, which should give you an idea of how fun the movie can be, and how bad these sequences are as well. Come for the movie, but maybe fast forward through the framing bits.