For anyone of a nerdy persuasion, Mystery Science Theater 3000First aired on the independent TV network KTMA, Mystery Science Theater 3000 grew in popularity when it moved to Comedy Central. Spoofing bad movies, the gang on the show watch the flicks and make jokes about them, entertaining its audience with the same kind of shtick many movies watchers provided on their own (just usually not as funny as the MST3K guys could provide). It became an indelible part of the entertainment landscape from there, and lives on today on Netflix. is a touchstone. Much like Monty Python and the Holy Grail and The Princess Bride, MST3K holds a place in the pantheon of productions all geeks are expected to watch. There are episodes of the series that are considered required viewing (like "Space Mutiny" and "Manos: The Hands of Fate") and if you haven't seen them you're expected to go out and watch them. Like, right now. I'll wait. 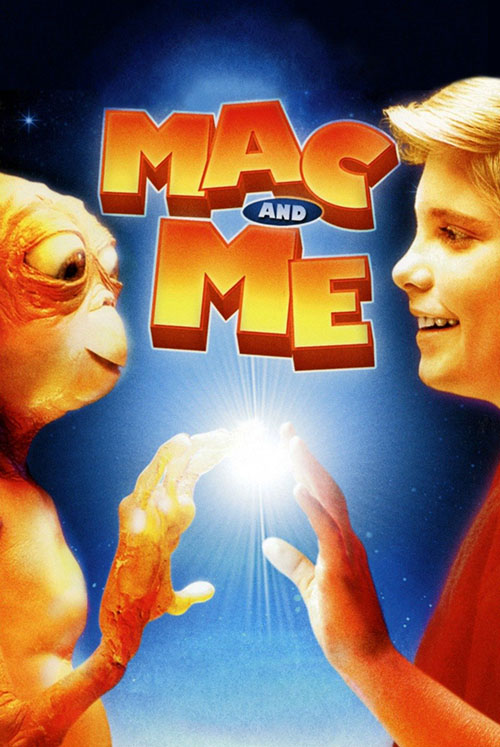 In 2017, after 18 years off the air, NetflixOriginally started as a disc-by-mail service, Netflix has grown to be one of the largest media companies in the world (and one of the most valued internet companies as well). With a constant slate of new internet streaming-based programming that updates all the time, Netflix has redefined what it means to watch TV and films (as well as how to do it). helped resurrect the series along with a huge, successful Kickstarter drive. And now, for turkey day, Netflix has brought us a second dose of the revival: a six-episode run designed for binging called "The Gauntlet". So this seems like as good a time as any to begin our dive into MST3K, and we start with the first episode of "The Gauntlet": Mac and Me.

Every movie MST3K has ever covered has been one I've never seen before, but in the case of Mac and Me that was through sheer luck on my part. This movie came out when I was a kid and there was a very real chance I could have been subjected it (without the aid of comedians and funny puppets) at some kid's birthday party. The fact that I managed to not see it before this episode meant I could "enjoy" the movie fresh without any preconceived notions about it's relative crappiness.

Well, okay, that's not entirely true. I have seen one scene repeatedly, but that's only because Paul Rudd keeps showing a particular scene over and over again on the various incarnations of Conan O'Brian's talk show. He uses it as his "clip" for any appearance he makes on the show, no matter what movie he's actually advertising. And, bear in mind, Paul Rudd is in no way connected with Mac and Me so it's just a cruel running gag the actor has been playing on the talk show host for over a decade now.

That background notwithstanding, I really had little context for this film. What I got to "enjoy" was a film about low-grade aliens coming to Earth on accident, only to get mixed up with a family, product placement, and a whole lot of "hi-jinx". Mac and Me is, in essence, a rip-off of E.T., one designed to sell as many different products to kids as it could. E.T. sold Reese's Pieces to kids, right? Well, Mac and Me attempts to sell Skittles, Coke, Carnation ice cream, McDonald's, and so many other things that I simply lost count and stopped caring. I know the main kid was a huge fan of the Chicago Bears, but I don't know if that was supposed to be because he was from Chicago or if that was product placement for the team. It's that kind of movie. 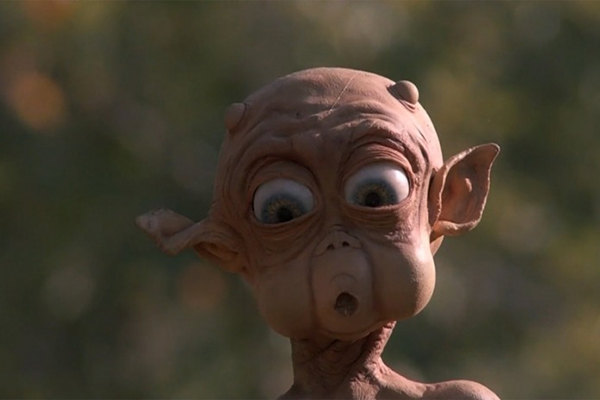 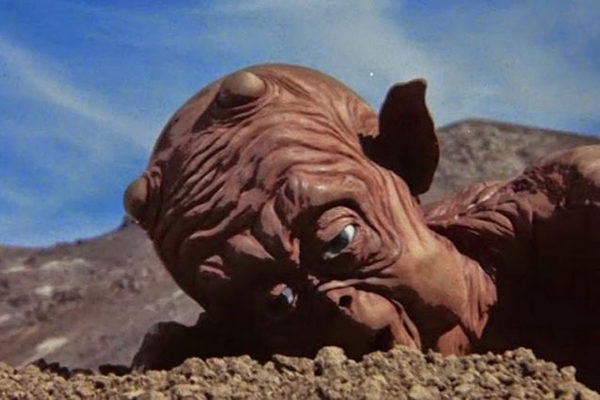 The product placement wouldn't be so bad, honestly, if there was anything else going on in the film to distract from it. A good movie can get away with a fair bit of product placement if it distracts you with other stuff in the process (or, in the case of Wayne's World or Josie and the Pussycats, leans in so hard you can't even tell if it's actual paid placement or not). Sadly, there so little that works about Mac and Me that the obvious product placement becomes the only thing you can really focus on.

The main story of the movie is really that four aliens, a family of critters on some far-off planet, accidentally get sucked up into a NASA probe (it makes as much sense to see it as for me to write it) and some how, very quickly, get brought back to Earth (because this movie knows as much about space travel as it does the conventions of good movie production). On Earth, the aliens escape the probe and run off. The youngest, called "Mac" by the kids he befriends, gets separated from his family and ends up traveling half-way across the country in the back of some random kid's van. Once the vehicle stops (at the family's new home in California), the alien gets up to trouble. The kids, though, befriend the ugly bugger, eventually helping to reunite the family. And, despite the American military being on their tails, and then the aliens eventually blowing up a grocery store (in a really over-the-top fashion for no reason), all is forgiven eventually and the aliens become U.S. citizens.

I just... I have no words. The plot is truly nonsensical and, at any point in the proceedings, someone should have been able to say, "you know what? No. This makes no sense. How does any of this work? Can we please just stop, let the Army have this ugly bugger, and we can go back to barely acting through this half-written film?" Events happen and, sure, they make sense to the audience because we have all the information, but characters know things they shouldn't know, people are able to put events together without any context, and then the movie just ends. Just thinking about the story pains me, but it pains me even more that someone got paid for this screenplay.

Worse, though, is that someone made the creature effects and though, "yeah, these are film-worthy". The aliens are horrifying. The screen shots I was able to find don't do justice to them because you can't see them in lifeless action. The aliens have exactly one expression, with barely-functioning animatronics for their faces. E.T. was cute and he became a cultural icon. Mac is horrifying and haunted children's nightmares throughout the late 1980s. If he had been placed into a John Carpenter movie, the context would have at least looked better (even if his effects are too crappy for that auteur's films). 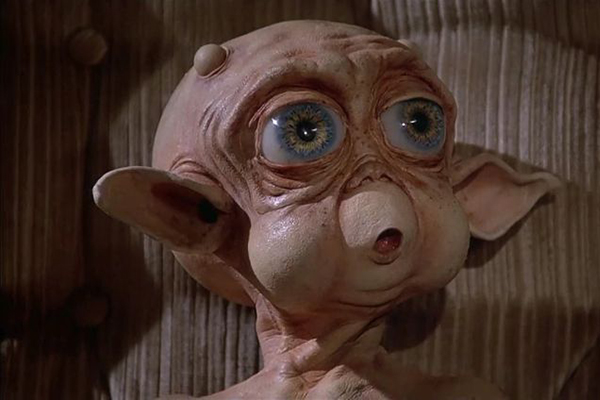 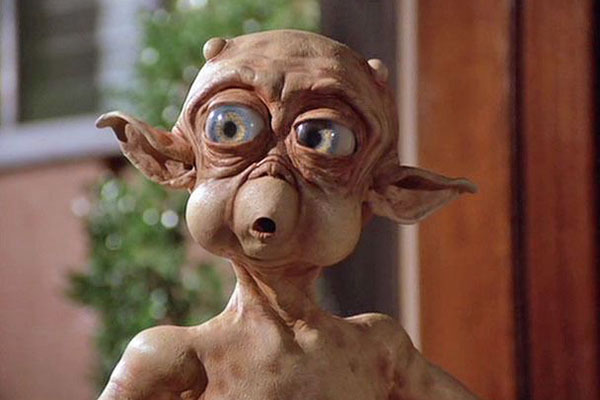 The film is the right level of badness, though, for MST3K. It's the kind of film that had just enough competent people involved that, with the aid of Jonah, Tom Servo, and Crow, you can actually sit through the film and enjoy the experience. This is the kind of movie MST3K thrives on: a big-budget, spectacular failure with enough going on for the comedians to riff on constantly. There are so many good jokes, songs, and references the crew makes that even though the film itself sucks, the episode is fantastic.

Mac and Me is a movie that never should have been made. It's a cinematic turd that deserved to go to the bargain bin (instead of having a wide release in theaters, even if that release was in the January dumping ground). I couldn't imagine my seven-year-old self being able to get through it, and I will never, willingly, watch the movie straight. But that's the glory of MST3K: you can laugh at the movie, enjoying how terrible it is. Just try not to let the images of these aliens burn themselves in your brain.