Well, That Was Different, But Not In a Good Way

Horror movies, generally, are cheap affairs whipped up quickly and then shoved out to find whatever money they can make. At the upper studio level, little consideration is taken to ensure quality, expecting that a proliferation of blood, gore, and boobs will help even the dumbest of horror movies find an audience and recoup whatever small amount of money was funneled into the production. That's not to say that the people working on the film don't care about it -- I'm sure they do -- but at the end of the day Hollywood just cares about making money, and if a film is able to pull in more cash than it costs, it's a winner and a sequel is green-lit. Because horror movies are cheap to make and can easily find enough of an audience, they generally get a lot of sequels. 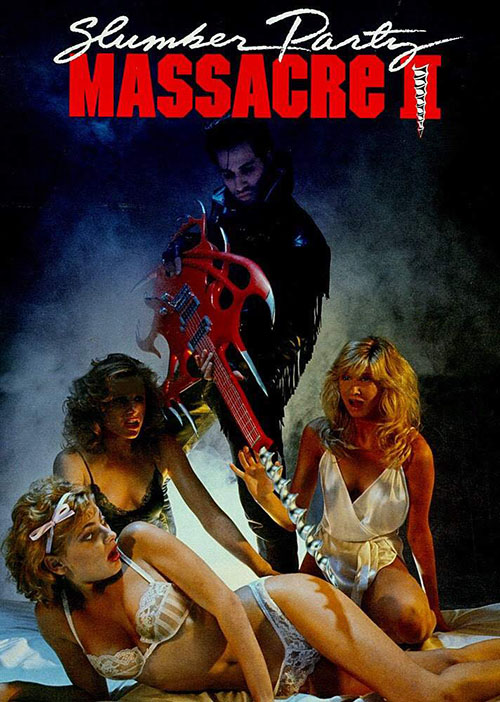 That should explain how the first Slumber Party Massacre managed to get a sequel. It's not a terrible movie, not by the low standards of genre horror fare, but it certainly wasn't memorable. It was just another "pretty girls all die" slasher flick, with barely anything to make it stand out from the crowd. The sequel, though, is a different matter. This is a truly strange movie one that's only marginally connected to the original in any way, and while I have to give the filmmakers credit for going as far out into left field as they did, the movie just isn't able to do anything with the creativity, wasting whatever meager potential it might have had.

In Slumber Party Massacre II, Courtney, younger sister of one of the girls from the first flick, is about to turn 18. Her friends, who are also her band mates in their all-female pop garage band, are all going up to a condo for the weekend. A weekend that also happens to be Courtney's birthday. Lying to her mother about who all would be there, Courtney gets permission to go and joins her friends on their road trip. But Courtney also has a secret: she's been having dreams laced with memories laced with visions, all tied up in the events of the first movie that she witnessed. Her older sister is already in a mental institution over it, and her mother thinks the younger girl may need psychiatric help as well. Her friends start to think it to, until suddenly the killer from Courtney's dreams turns out to be real. Then it's time for the real massacre to begin.

Credit where credit is due, at least Slumber Party Massacre II isn't the same exact film as the first. Instead of the killer somehow coming back to life and just going on another, similar, drill-filled rampage a second time around, this film implies a kind of Freddy Kruger-esque dream killer who can somehow get out into the real world. Or does it? There aren't any rules really established for the killer, and it's just as easy to think that Courtney has been insane all along and either some, or all, of the events that happen in the movie may or may not happen at all. It could all be in her brain, and the movie tries to play it both ways.

Some might like that kind of ambiguity in a movie, and if it were handled correctly I probably would have been on board as well. However, this film was so vague about everything, spending almost an hour essentially making you doubt everything Courtney, our "final girl", is seeing that you never believe anything that's going on. Worse still: you don't care. There are no rules, there are no consequences, and in the end nothing really happens (at least not that you can believe). If you can't accept that anything on screen is really happening, how can you get invested in the scares? You can't. 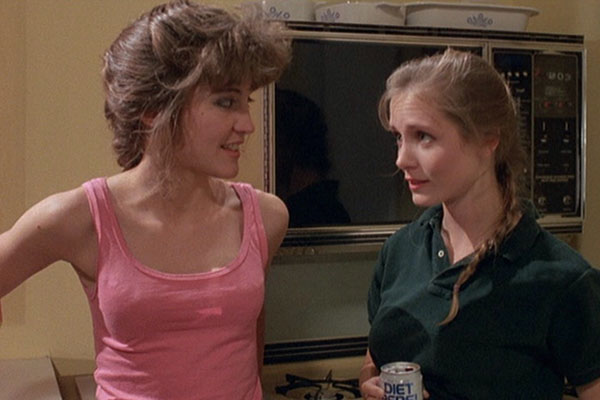 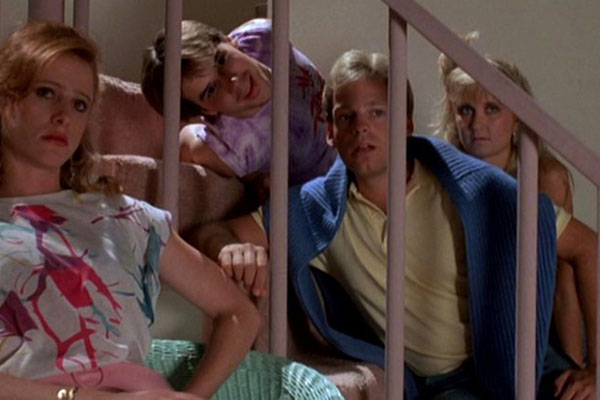 That all might have been tolerable if there were other things to distract you. Since the killing doesn't really happen for the first two-thirds of the film, you have to latch onto the dream sequences for any thrills... except they aren't shot well, are poorly edited, and they're just way too vague. It's all pretty obvious first the first hour what is and isn't a dream sequence, and by the third time you get stuck in Courtney's head waiting for the plot to continue, you just tune out.

Along with a lack of good kills, there's a lack of anything else entertaining. There's very little nudity, which is usually a good old standby in a slasher film to distract you from everything else that isn't working. There's also no real humor, no worthwhile characters, and nothing that really happened for much of the runtime. It's all just so... pointless.

The acting, though, really does need to be singled out. During the numerous musical sequences (oh god, the music), we have characters constantly looking at the camera, mugging away. Then, the rest of the time they're barely reading their way through their lines. Frankly, these aren't characters; they're disposable actors waiting to be offed so they can go back to their trailers. You don't invest in them, and you don't care when they die (probably because they didn't either).

And the music. Oh that painful music. These girls want to famous pop singers, and we get two musical performances from them in the film. These numbers are both, without a doubt, some of the worst music in a horror film. I've watched plenty of terrible horror films that use musical numbers to pad out the film -- Blackenstein stands out as a particularly egregious offender in this regard, wasting much of it's runtime on unrelated musical sequences in a bar -- and yet SPM II has the worst music I've heard in some time. Put four cats in a bag, shake them up, and record their caterwauls, and you'd still have better music than these two songs. 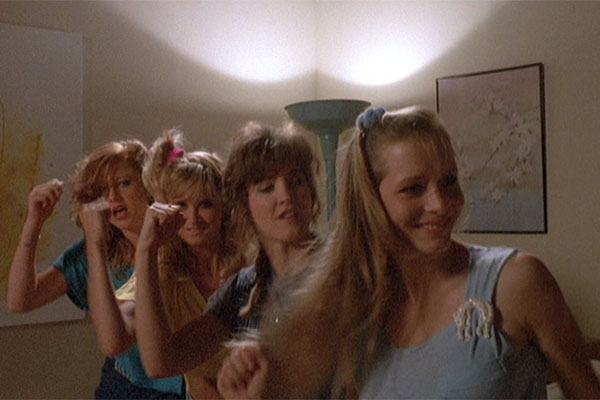 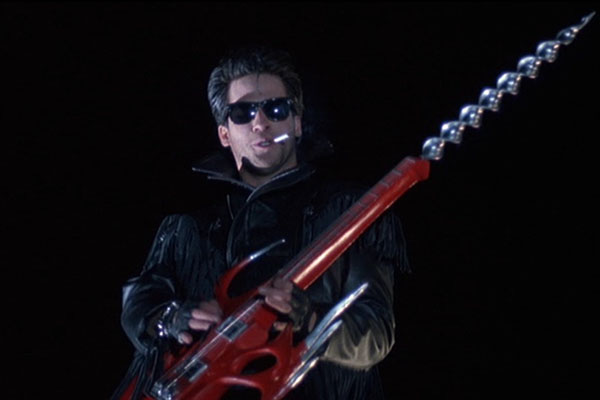 Worst, though, is the over all tone of the film. While it starts out as a fairly serious movie, the tone the varies from musical romp (with the aforementioned singing and dancing), to maybe horror-comedy (the film certainly plays it like comedy just... without anything funny happening), back to straight horror. Settling on a single tone would have helped make the movie better, but when you then consider that this movie is somehow supposed to take place in the same continuity of the first film, you're left even more confused by what you're watching.

This movie is bad. Seriously bad. If you liked the first film (which did have it's charms), skip this one. If you want to watch a run of really cheesy slasher films, still skip this one. You really have no reason to watch it. Trust me.

Thankfully, the third film in the series is at least slightly better...

Well within seven minutes the girls have all butchered music in general with a terrible garage performance. I seriously wished the killer would have show up immediate and slaughtered the lot of them right there. It might have made for a short movie, but I would have accepted that as the price to be paid.

Ignoring that, we have the lead girl lying to her mother so she can go to a (parent-free) party. And then eventually a fair bit of drinking, plus a little bit of off-screen sex (we hear mostly moaning). Still, the crimes against music were all the motivation we needed for them to die.

Although the movie flirts with the lead girl seeing people die and lots of blood, it's all in dream sequences at the start. We don't get a real kill until over 50 minutes in (of a 75 minute run time), leading to a very lackluster kill experience.

Aside from the total butchering of pop music, we have six kills to speak for, all in pretty quick succession. To it's credit, this is definitely a massacre, but it exhibits very little foreplay, with pretty mild gore, and the killing feels like it's over before it really gets going.

Articles about the Massacre Series