See, This Is Why You Don't Have Slumber Parties

I have a deep love of horror movies, something I'm sure I've noted several times on this site (recently, no less, as this is the season of Halloween). One genre I like a lot is slasher flicks, even if I'm hard pressed to explain exactly why. Sure, part of it is the stupidity of the characters, the enjoyment of watching dumb people put themselves in dumb situations and then karmically paying the price. Maybe there's a slightly mean-spirited part of me, as well, that enjoys that most of the people that eat it in slasher flicks are the popular kids and (as should be no surprise considering I run a geek-culture site) I was not one of the cool kids in school. That might be, in a small way, part of it. 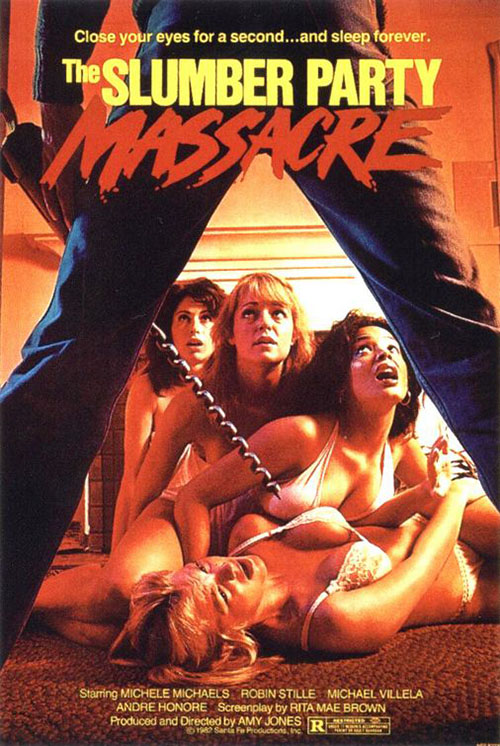 My plan was originally to launch a slasher movie site separate from Asteroid G, but I have to admit that I just don't have the time to take on yet another project. Since we just covered the new Halloween last week, this seemed like a great time to start a feature focusing on slasher flicks (if for not other reason than to stop me from trying to run yet another, regularly-updating site).

We begin with The Slumber Party Massacre, this first in a very loosely connected series of films, and a series that I hadn't watched before writing this article. In the film, good-girl Trish plans to be home alone over the weekend as her parents are going out of town. With the house empty, she invites some of her friends from school over for a slumber party. There would be drinking, smoking, and (hopefully) a few boys. Unfortunately for the girls, a killer recently escaped from police custody and he plans to crash their party the bloodiest way he knows how.

It's funny to me that this movie became a series. It's not bad, and certainly watchable, but there's nothing especially good about it either. Of course, horror has always been a relatively cheap genre to work in and this film is practically a one-set setup -- a good two-thirds of the movie takes place at Trish's house, helping to keep the costs of the production down. From that perspective, it's not hard to see how the first Massacre made back its money and started a little franchise throughout the 1980s. 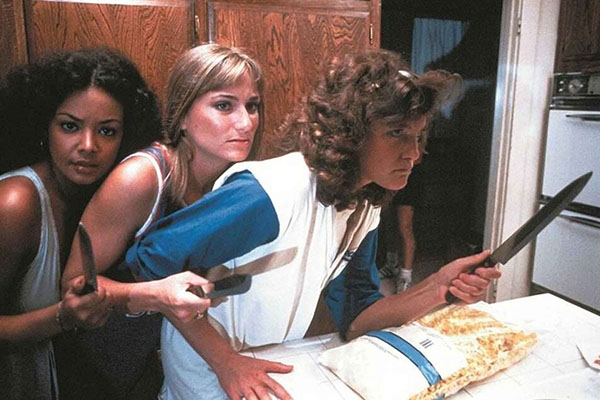 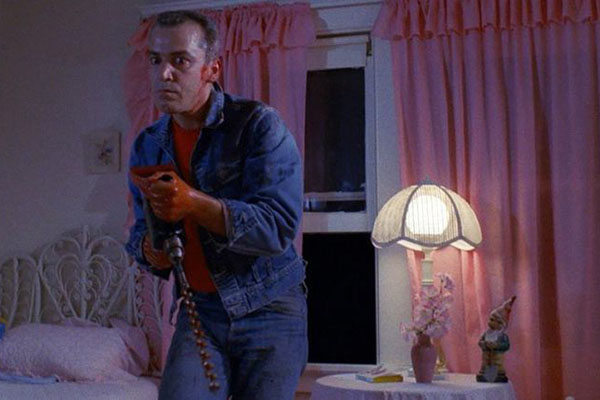 Of course, what probably drew most people in was the T&A factor. There is a lot of nudity in this movie, more than you expect in most slashers (more than the single set of breasts to appease the audience, as Cabin in the Woods put it). When all you're looking for is murder and nudity, you get exactly what you pay for with The Slumber Party Massacre as the film certainly delivers on both.

For everyone else, though, there isn't really that much going on. The plot is beyond threadbare: the girls want to have a party, they all gather together, and then they sit around while killing happens all around them. Most of the murders they don't even notice (nor does anyone else in the neighborhood, for that matter), driving the body count pretty high before anyone starts to catch on. This leaves the story as more "day in the life" than "why is this happening" tale. There's little motivation provided for the killer and basically no back-story given for him. One of the final girls even asks why he's killing, to which he replies, "because I love you." But this isn't motivated by a specific girl -- he just loves women and want to kill them all to show his love.

Except, even then, he kills a lot of dudes, too. A good portion of the body count is men, muddling the M.O. of the killer. Is he motivated by sexual lust? Well, the fact that he kills with a drill would seem to indicate that. Hell, there's at least one pretty overt shot implying that the drill is his preferred sexual appliance (a low angle shot with the drill glimpsed hanging down between his legs). One would think he kills women as a way to gratify himself instead of having sex with them, but when you add in all the men he kills, also with drills, you end up more confused than anything else about why he's doing it and why he has to do it (almost) exclusively with a drill.

Even if we don't try to dissect the "why" (which can be half the fun of a slasher film, especially one with a largely off-screen killer) and just enjoy the film for the kills, those kills really aren't all that interesting. Guy sneaks up behind victim, victim screams, he chases them, and then judiciously applies his drill. You can then rinse and repeat that for most of the kills in the movie. We don't even really see the gore from most of the kills, probably because the actual driving of a drill in fake flesh would have been too expensive for this piece. So mostly it's screams, off screen drilling, and then later a body with a gory hole in its head. Pretty meh, really. 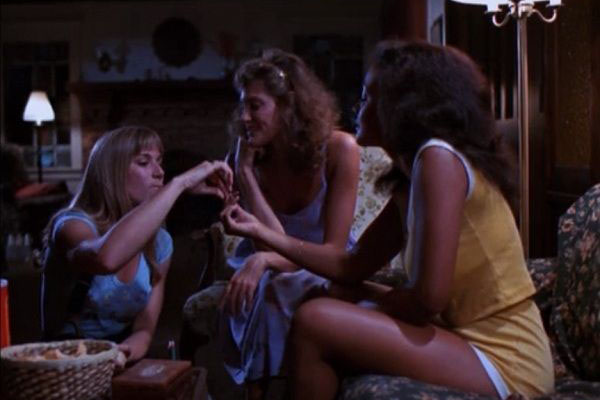 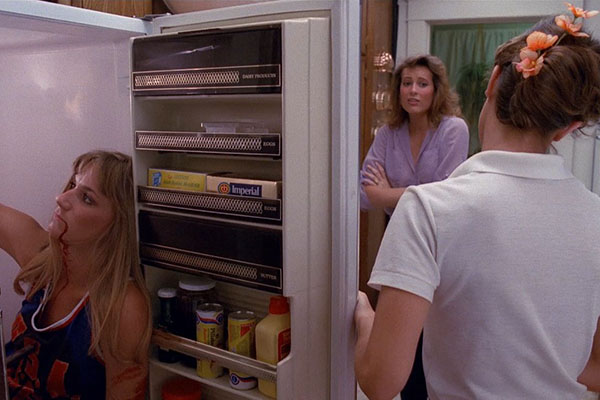 At least the girls themselves are largely up to the task. The acting is decent, without any breakout stars but also no one that's really bad at what they're doing. Considering the slasher genre and the terrible acting we can expect, this is above par, really. The worst part of the casting is that none of them look anywhere close to the age they're playing. Most of them are playing 18-year-olds but they look in their late 20s or early 30s. The main girl, Trish, looks as old as her mom, and their coach, who is presumably supposed to be 20 years older than them, looks exactly the same age. For half the movie I thought she was supposed to be one of the girls.

All things considered, though, there are worse slasher movies to watch. I doubt The Slumber Party Massacre won any awards, and it's hard to see watching it more than once, but it's good for a one-off viewing (and, considering it's a series, perfect for marathoning). Give it a watch, and then maybe see what else is on afterwards.

We start pretty early with nudity, but it's not sexual (at least in the movie) so it doesn't really count. However, the "Final Girl" of the film immediate throws out a bunch of her old, girlish things (stuffed animals, toys, dolls, etc.) right into the outside trash can instead of donating them to a needed family. I mean, come on: donate or recycle! That's pretty sinful, right?

If that doesn't count for you, we have mean girls being mean in a locker room. Then the party itself begins with drinking and smoking pot. So at that point, take your pick.

The killing starts pretty darn early. Six minutes in, a girl is killed with a drill to the skull. We don't see the actual drilling on screen, but there's a decent blood splash across a wall. No reason is given for the kill except "because" -- she hadn't sinned in any way -- but hey sometimes these movies don't need consistent reasoning.

We do also get to see her corpse in a dumpster later just in case you wondered if she was actually dead.

Eleven. One before the school day begins, a second at the end of the day (although this one is largely off-screen so it's hard to say if it really counts), and then eight at the party (three guys, four girls, and the pizza boy), plus the killer. Of course, the last is questionable since killers always come back in the next movie.

Articles about the Massacre Series