I Guess Shatner Is Technically In This One, Too

I know I've noted before I like horror movies (and shows, and books, etc.). Slasher flicks, especially, rank high on my list primarily because the good ones (of which there are a few) manage to mix high-concept with low-brow effects, gore, and scares. Sure, there are plenty of trashy, terrible slasher flicks out there, but even those films usually have a few redeeming qualities that make them watchable in a group setting (with a bunch of people yelling at the screen and laughing the whole time). It's rare to find a truly terrible slasher flick, the unwatchable turd that just isn't worth ever seeing again. 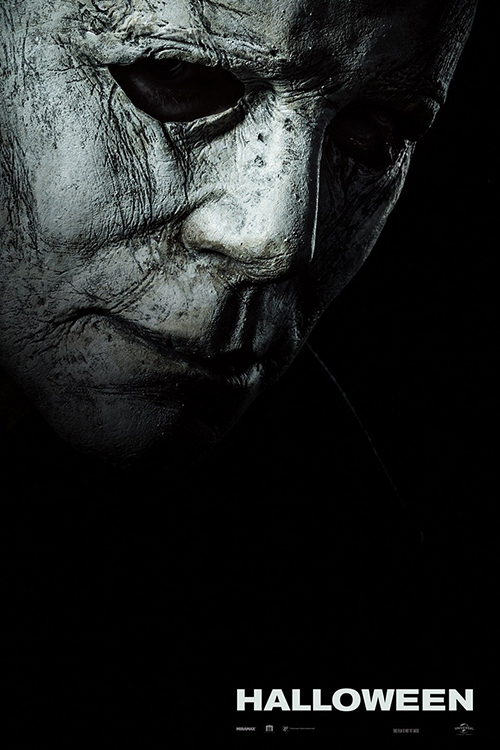 It should be noted that the Halloween series has more than one unwatchable turd (to now coin a phrase). While opinions may be mixed as to the quality of the first sequel, Halloween II, almost no one feels the need to defend the not really in continuity Halloween III: Season of the Witch. And then there's the truly terrible Halloween 6: The Curse of Michael Myers which gives the kill and unnecessary back-story involving druids and stuff. It's truly dumb. Because of that, really, the Halloween series could have more hits than missed depending on who you ask.

That's surprising when you consider the fact that the first film, the 1978 original Halloween is often held up as not only the high point of the series but also the film that helped popularize the whole Slasher genre. The fact that none of the sequels could really recapture the magic of the original says something about how singular the original idea was as well as how truly difficult good slasher horror is to create. You can't just have a masked killer roam the streets and pick off anyone they meet. There has to be a dance, a seduction of sorts as the victim plays into the killer's hands while the tension builds. This is a lesson Halloween 2018

Set 40 years after the original, Halloween 2018 ditches all the previous films in the series save the 1978 original. Here, heroine Laurie Strode (a returning Jamie Lee Curtis) has been living for the last four decades in fear of what could happen if Michael ever escaped from the mental institution the State of Illinois has called his home. of course, this being a Halloween film, Michael does escape -- on the night before Halloween (All Hallows Eve Eve, if you will), the state elects to transport Michael to new psychiatric digs. Naturally, the bus transport Myers crashed and the silent, hulking psychopaths breaks out, making a beeline right back to Haddonfield, leaving a trail of bodies in his wake. He has one goal: to kill Laurie. He's going to be in for a surprise, though, A Laurie has been awaiting this day, and she's prepared to take the fight to Michael.

As much as I have qualms about the reboot setting for this film (which we'll get to in a bit), the part I do think the film handles best is the dynamic between Laurie and Michael. Curtis is a force in her returning character, capturing so many of the emotional moments early in the film, letting this mess of a character play out on screen in a very raw and open way. When Michael does come calling, Laurie organically shifts gears, falling into her training of the last 40 years and becoming her own stalking force. The film gets a lot of great mileage out of the dynamic between the two characters, often inverting the series' own tropes (including moments from the original film) to find new moments that feel fresh and interesting. 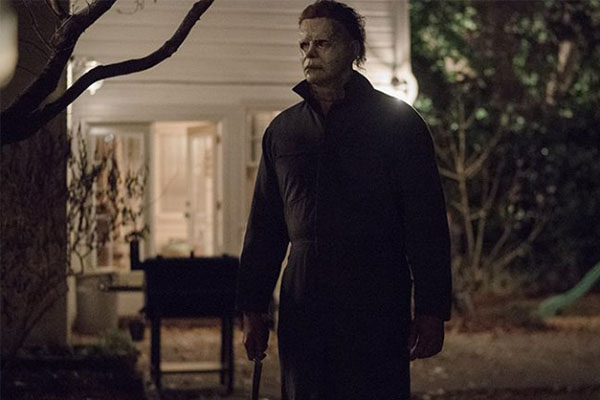 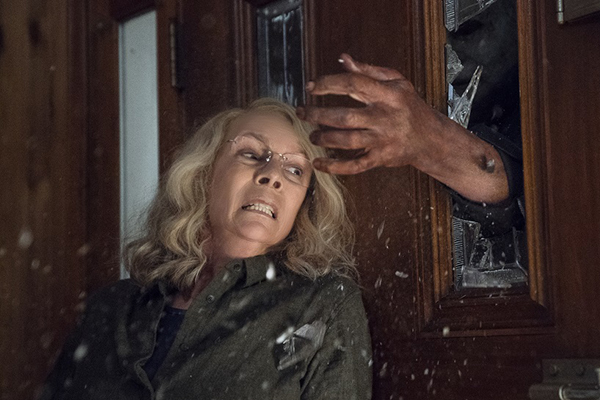 Well, mostly. Of course, this isn't the first time the series has tried to reboot itself, the last time two decades ago for the 20th anniversary of the film which also brought back Jamie Lee Curtis to her most famous role. There, too, we found a damaged Laurie being forced to take her fight to Michael with only one of the two of them coming out on top. The new, 2018 edition certainly finds its own twists with the concept, turning Laurie into a lonely survivalist, but the concept of pitting these two against each other, of forcing Laurie to become a bad-ass to survive, isn't as fresh as it once might have been.

That then begs the question of why a reboot was really needed at this point at all? Sure, Laurie died in the eighth movie in the series, the absolutely terrible Resurrection (not that the preceding reboot film, H20, was a real winner either). A reboot of some kind is, of course, needed to bring Laurie back but beyond exploring that dynamic (which, admittedly, the film does really well), very little new is added to the overall Halloween dynamic. Outside of Laurie (and her family), the film is a pretty rote entry in the series, a fairly basic slasher without much creativity to be found.

Much of the problem stems from the fact that Michael just isn't a very interesting character. As "the Shape" in the first film, Meyers was a force, a dark shape rarely glimpse before immediately striking out of the darkness. The best kills in the film, and slasher in general, take a while to build up, letting the characters set up their own sins, seclude themselves when they really shouldn't, before it's all too late. Halloween 2018 has none of that flair. The best sequence in the film is a long tracking shot following Michael on Halloween night as he slowly walks through Haddonfield and takes out a couple of adults. They're all crimes of opportunity, but we're not watching long, tense moments of characters going about their lives -- this is all from Michael's perspective, and he's no longer a shape in the darkness but a main character going about his own life.

I'm not saying Michael needs to have motivations or a story (or, heaven forbid, dialogue). If anything, Michael needs to be in the film less, not more. To build tension, that dance need to be played out, that looming threat of Michael maybe showing up while we in the audience wait for the killer to eventually deal the death blow as an accent to a long scene, not over and over during the course of it. 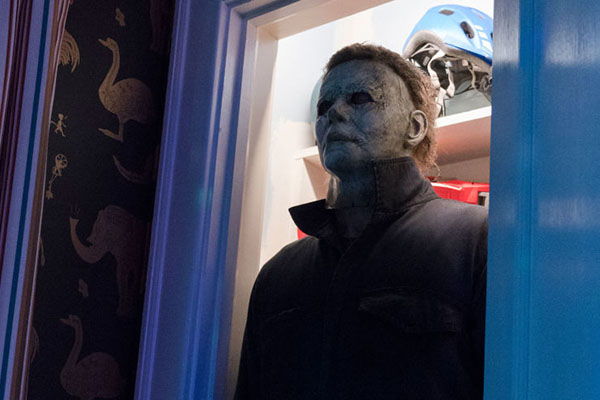 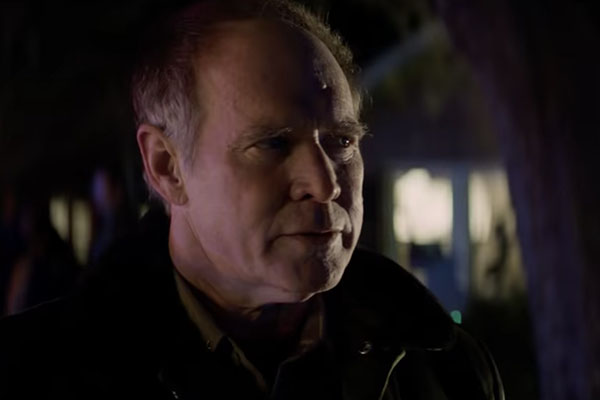 Let's take that tracking shot. Instead of staying focused on Michael the whole time, we should have just slowly moved through Haddonfield, staying focused on the residents of the town. As the camera slowly moved along, panning around slice of life (no pun intended) scenes, we'd occasionally get glimpses of Michael, watch him walk out of shadows before entering a house. Sometimes we catch a glint of light on a knife before it's gone. Other times we'd watch a woman give out candy to trick or treaters before entering back into her home only to find Michael suddenly right behind her. He should accent the scene in quick bursts, but the film never has that kind of grace.

If anything, these are some of the most lackluster kills I've seen in a Slasher in some time. Michael show no grace, no skill with what he does. He's just a big brute single-mindedly moving through the town and killing anyone he comes across as quickly as he can. Maybe that's realistic to the character, but it's not scary or interesting to watch. He racks up an impressive kill count, but I didn't really care about any of the kills at all.

And it's sad because half of the film is so very good. I dug watching Laurie hunt down Michael, luring him into traps and turning the tables on the Shape. If more of the film could have just been focused on her, her family dynamics, or story, Halloween 2018 would have been a much better, and more interesting, beast. The film we got is neither interesting nor scary outside of her plot line. It's just a waste of potential.

It was certainly successful at the box office so far, thought. Even if they make a sequel and eventually dive the film series into the ground once more, that doesn't mean the franchise is dead. Hell, we might just get yet another reboot in ten or twenty years, probably staring a different version of Laurie once more.

The early parts of the movie are fairly sin-free. There's fair bit of hubris, especially following a side-plot about about a couple of podcasters trying to learn more about Michael Myers, and then egging the spree killer on. Real sins don't really occur until the halfway point in the film, after some of the killings have already happened. We get some kids drinking and smoking pot, but the sins don't lead to the killing, which is unusual for this kind of movie.

Although a couple of kills are implied off-screen, the first real kill is a pre-teen kid, strangled in his father's truck because Michael wanted the wheels.

Sixteen-plus. A few kills happen off-screen (which doesn't count in this kind of metric), and only fifteen of the ones we see can be attributed to Michael. That said, the movie certainly goes for quantity over quality when it comes to murder.