Revenge is a Dish Best Served in a William Shatner Mask

Halloween 5: The Revenge of Michael Myers

It's fair to say that the HalloweenThe franchise that both set the standard for Slasher horror and, at the same time, defied every convention it created, Halloween has seen multiple time lines and reboots in its history, but one thing has remained: Michael Myers, the Shape that stalks Haddonfield. series was searching for a way forward. After the failure of Halloween III: Season of the Witch, the plan to turn the series into an anthology horror franchise failed. Bringing Michael Myers back in Halloween 4: The Return of Michael Myers gave the franchise a successful movie again, at least at the Box Office, but trying to determine where the series should go from there was a bigger issue. Michael was seemingly, decisively killed at the end of the fourth movie but, of course, he was seemingly, decisively killed at the end of Halloween II and they somehow managed to bring him back after that. What direction would the series take from there? 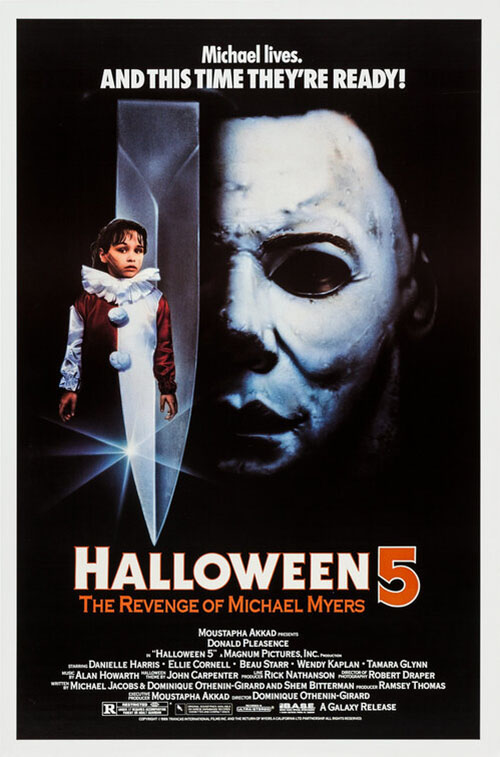 The answer, of course, was just to do more of the same. Any hopes that the series could take a weird turn and explore some new ideas get dashed pretty early at the start of Halloween 5: The Revenge of Michael Myers. We start with a recap of the end of the previous film with Michael getting shot to hell and falling down a mineshaft. What should have been his ultimate demise, though, was actually his means of escape as the mineshaft lead to an opening to the outside world and Michael was able to crawl to freedom and float his way down river. He stayed hidden for a year (of course) only to emerge again one year later, ready to try and kill his little niece, Jamie (Danielle Harris, once again), for reasons that really only make sense to Michael. Haddonfield is in for another bout of horror as the Shape returns once again.

My big issue with the previous film, Halloween 4, was that it felt like a recooked version of the original movie. Michael escape from the institution, stalked the streets of Haddonfield, and then went on a murder spree taking out everyone he could because that's all he wanted to do. Set it ten years forward and change his teenage target into a little girl and you've done as much creative writing as the creators of the fourth movie. That film ended, though, with little Jamie picking up the knife and attacking her adoptive mother as if, somehow, she's taken on the essence of Michael and his need to kill. I, for one, thought the series was going to explore Jamie next, maybe get into her head space and see what drove her to kill. Did she hear Michael in her head? Was she just twisted up about what happened to her in the fourth movie and just wanted to kill simply because? What was the motivation for her action?

Instead of exploring any of that, the film simply cuts to the next year and Jamie is in a children's clinic getting the help she needs after her trauma. The violent rage is explained away as her having a psychic connection to Michael -- it wasn't her fault and she didn't want to kill. While I credit that the psychic crap was unexpected, it's hard to say the film really does much with it. Mostly Jamie thrashes about on a bed and half-mumbles about where Michael is but, naturally, he's always gone before people get there. The Shape is too fast for you idiots.

There are any number of ways the film could have explored this connection. But instead of taking any really interesting narrative steps with Jamie and Michael, the film boils down to a reheat of a reheat. After introducing Haddonfield again, Michael proceeds to cut his way through a few folks, showing up at random houses and one big party, so he can kill stragglers and random lovers. He's like a scavenger bird, picking at the edges of the crowd to feed. if people would just realize that Haddonfield is a dangerous place and being anywhere near Jamie is a fatal condition, they'd all live a whole lot longer and this movie would have been a good thirty minutes shorter. 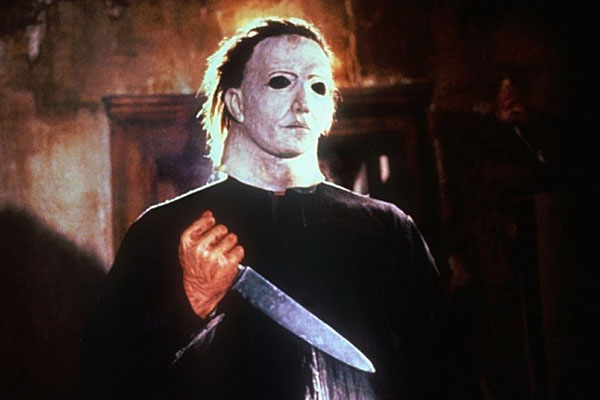 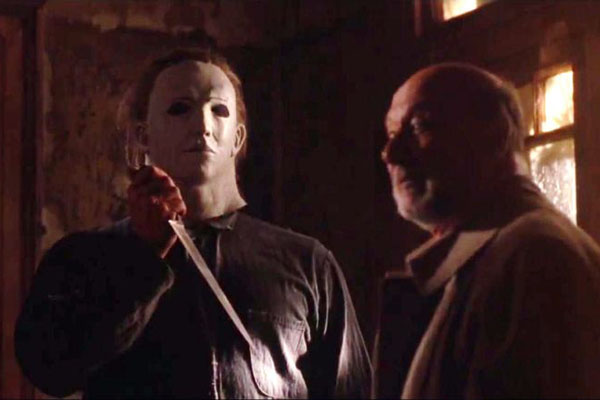 Making the film shorter would have been a good thing as, at an hour and a half, this movie feels absolutely interminable. It reached a spot that could easily have been the climax of the movie at the hour mark, which I know because I checked the time on it at that point, and that hour had already felt like three. And yet there was more "story" to tell, apparently, as the film dragged everything out for yet another confrontation between Jamie and the Shape. It just goes on, and on, and on, without any action to speak of.

That's really my big problem with this movie: for all the time spent on setup, for all the people that die, nothing really happens in this movie. Most of the kills happen off screen, for a example, or are shot in such a way that we barely see anything. Sure, there are a couple of decent kills -- one guy gets a pitchfork through his guts, marking the best kill of the night -- but most of the kills are only shown afterwards, with a body on the ground and all the good action left on the cutting room floor. Slasher films have one job, to show us brutal kills and make them scary, and this film fails to even give us the kills to begin with.

That's not to say the film doesn't have a high body count, just that we don't get to see most of it. So many kills happen off screen that it deflates any sense of horror we could have had about it. The first film had the lowest body count of the series but it was also the scariest because we got to follow Michael along his whole process from stalking all the way to the kill. Here, Michael barely does any stalking, and there's even less of the actual kill scenes, so that all the horror is left out of the movie. I don't need much from my horror movies, but actual horror is a requirement.

Of course, the film doesn't help itself by leaving us following a character, Tina (Wendy Kaplan), who gets to be our heroine for most of the movie despite the fact that she wasn't in the previous movie and really has no strong connection to the audience before she's thrust upon us. The point of reusing the characters from previous movies, of having a long continuity to the films, is to give you a strong connection to the characters that recur. We know Jamie and Rachel (a returning Ellie Cornell) but Jamie is a nine year old girl and not a good match for Michael, while Rachel is reintroduced and then almost immediately killed off (for no reason I can understand), so Tina, a friend of Rachel who just magically shows up, is the best audience surrogate we have. She's our heroine and we barely know her. 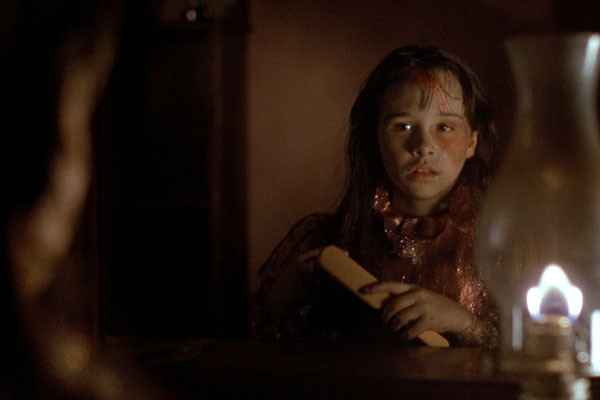 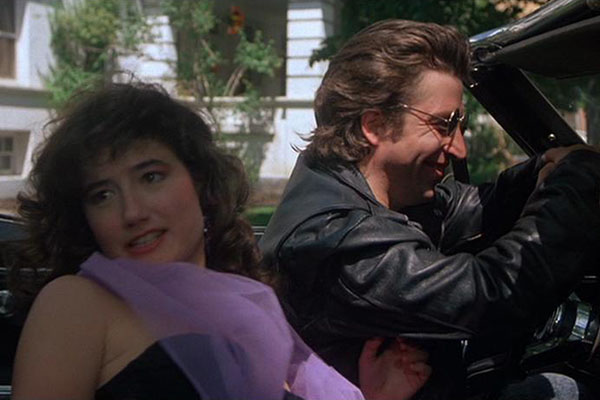 This is only highlighted by the last act of the film once Tina is injured and out of the picture and Jamie has to step up as our heroine. She's a tiny girl getting chased by a hulking dude and yet, somehow, she's always able to stay one step ahead of him. She should be easy prey but we supposed to believe she's somehow able to go toe-to-toe with the hulking Shape? Doubtful. If the film has somehow used her psychic connection to him so she could get in his head, maybe to fight the little kid in his head that he's basically been ever since he regressed and went on a killing spree, that could have been something. But in a straight, normal, physical interaction, Jamie should be so much mince meat and it's hard to accept her as the Final Girl of the flick.

I don't want to make it out like somehow Halloween 5 had potential if only things had been done differently. This film is garbage, from it piss-poor camera work to its inexpert direction and it's cheap-o, made-for-TV budget quality, and the only thing that could have saved it would have been a completely different production working on a completely different movie. I just think the basic ideas at play, either a killer Jamie or her and Michael having a true psychic connection, could have lead to a better movie. I don't know who could have made it or how that could have been done, I just see one grain of a possible idea and wish everyone involved in The Revenge of Michael Myers would have had to talent and skill to realize the movie they were making needed to be a different, much better movie. It didn't happen and this film ended up being considered a failure by just about everyone that saw it.

And yet even this film isn't the worst the series could manage...

No real sin, short of sneaking a dog into a medical facility. Not sure if that's really worth dying for, but people have died for less in these movies.

After getting shot (repeatedly) at the end of the last film, Michael found a way to escape the mine shaft he fell into (the producers really wanted Michael to stay dead originally) and crawled his way to safety. He found his way to a hermit that lived on the edge of town and, of course, once he was healed up Michael killed the hermit. Because of course he did.

Not counting the recap from the previous film, the first death is the hermit, followed by Jamie's step-sister, three of her friends, and four cops, plus a doctor. Oh, and then for no real reason, we had eight more cops line up to die right at the end. Total of eighteen.