He Returns to Save Us All... Wait, No, Wrong Guy

Halloween 4: The Return of Michael Myers

I feel like we have to start this off with a discussion of Halloween 4: The Return of Michael Myers by looking at whether bringing Michael Myers back was really necessary. As noted in the discussion of Halloween III: Season of the Witch, the original plan was to turn the HalloweenThe franchise that both set the standard for Slasher horror and, at the same time, defied every convention it created, Halloween has seen multiple time lines and reboots in its history, but one thing has remained: Michael Myers, the Shape that stalks Haddonfield. into an anthology series but, after the failure of the third movie, the studio felt it was in the best interest of the franchise to go back to the well and resurrect the Shape. And if we're looking at it from the perspective solely on "was Halloween III a good film" then going back to the tale of the Myers clan did make sense because, in fact, the third film is a really terrible movie. 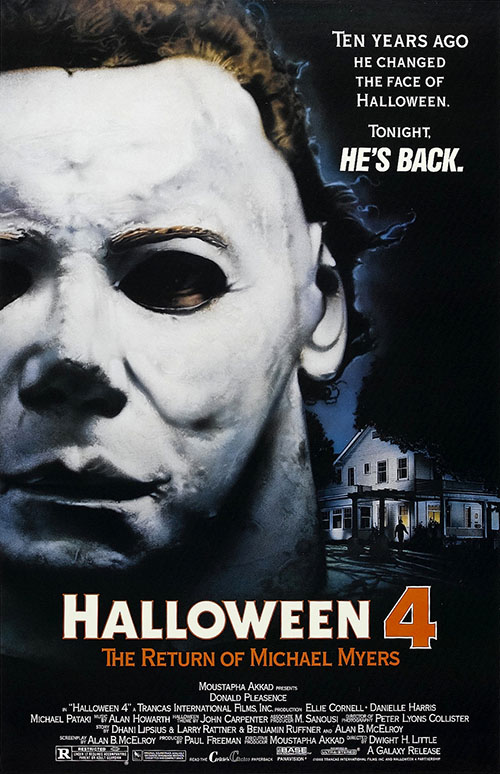 And yet, at the same time, did we really need Michael back? Didn't we, in fact, say all we needed to say on the matter back in Halloween and Halloween II? That film ended with the Shape being burned to death, every inch of him a flame with his mask melting to his face, fire creeping up from his eyes. At that point it was pretty conclusive that he died. Even if another slasher flick were desired for the franchise, did it have to be Michael? He's a mortal man, not a resurrected ghoul of vengeance (Jason from Friday the 13thOne of the most famous Slasher film franchises, the Friday the 13th series saw multiple twists and turn before finally settling on the formula everyone knows and loves: Jason Voorhees killing campers 'round Camp Crystal Lake.) nor a dream demon (Freddy in Nightmare on Elm StreetThe brain-child of director Wes Craven, A Nightmare on Elm Street was his answer to the glut of Slasher films that were populating the multiplex. His movie featured an immortal character, Freedy, with a powerset like none other, reshaping the expectations for Slasher movies to come.) so why go through all the trouble of bringing Michael back when a new threat could just be unleashed to fill the same void?

But then, bringing Michael back isn't really the only problem with the film. It's just the first of many that start off with Michael still somehow being alive, along with Dr. Loomis, both of who were blown up and set on fire as the end of the second movie. Despite how silly it is for these two to continue (especially when, at this point, Jamie Lee Curtis returning to the franchise as well), we have the ten year anniversary of Michael's Haddonfield rampage and, wouldn't you know it, the people in charge of Michael decide that now is the perfect time to move him. Smart, right? So on the even of his great terror, ambulance techs strap Michael into the back of a meat wagon and start driving him across the state. And, wouldn't you know it, Michael breaks free so he can go back to Haddonfield and continue what he started.

His motivation this time around: his niece, little Jamie Lloyd, who he just found out exists so, obviously, he has to go find her and kill her. In the process, of course, he has to kill everyone else he finds as well, doing the perfunctory job of meat grinder in this franchise that just won't die. Meanwhile, Jamie (Danielle Harris) just wants to enjoy Halloween but everyone around her picks on her because her uncle is The Shape. The only people on her side are her adoptive parents and sister, Rachel (Ellie Caruthers), so obviously that makes everyone Jamie knows a target for his wrath. It's going to be another bloody Halloween in Haddonfield.

So we have Michael and Loomis back in the pictures, and both are going about their same old shtick. Michael shows up randomly, kills people, and the wanders off again while Loomis runs around like a crazy person getting everyone worked up. Instead of Jamie Lee Curtis's Laurie we have her daughter, Jamie, but everything else about this film is a basic retread of the original films. Lather, rinse, and repeat for this by-the-numbers sequel. 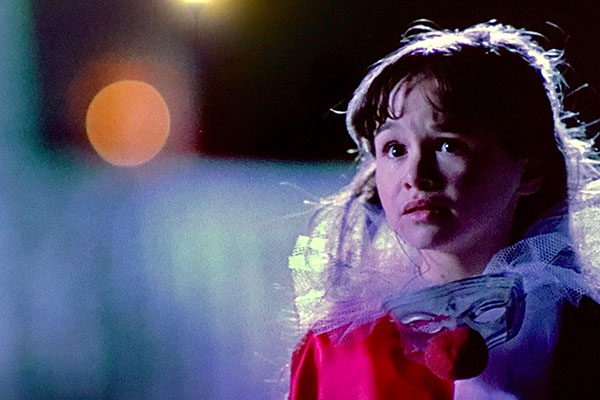 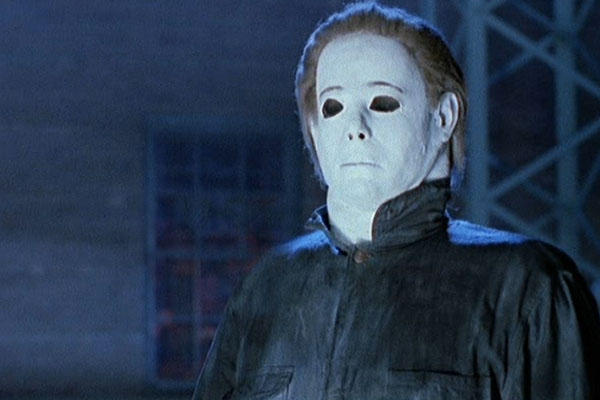 Much of this film feels so perfunctory. While the plot is basically just cobbled together from the previous two Myers movies, the rest of the film is basically just going through the motions as well. I noted back in my review of Halloween II that really only Carpenter has the right feel for this series as the sequel lacked his magic, he eye for composition, his ability to build the terror before unleashing the thrills and kills. This film has that same issue as the director, Dwight H. Little, has no real sense of how to stage the action in this movie at all. All the compositions are very basic, to be sure, but what's worse is there's no build up, no sense of terror slowly creeping in, that made the first film such a winner.

Take the original scenes from the first film. There, Michael is always somewhere, lurking, watching. You aren't sure what he wants you just get this sense that something is about to happen... and then it lingers and builds. Here, Michael gets to the killing early, starting with the people in the ambulance before moving on to anyone that crosses his path. There's no build up, no waiting for the tension to unleash because Michael just can't control himself. Even when the film tries to follow the same template, having the Shape take his time stalking Jamie, we don't get the lingering shots that build the tension. He's just suddenly there, and then gone, off to kill someone else while he bides his time. It ruins the flow of the movie and prevents any sense of release since the killings are only a scene away. The natural flow of horror is lost.

Even then, the kills themselves are awful. Most of them are bloodless, a scene of an attack before the film cuts away to something else, as if it's afraid to show too much gore. The few kills it lingers on are probably the dumbest though, hugely improbable kills that shouldn't work for any mortal man. Take for instance the mean girl, Kelly (Kathleen Kinmont), who has eyes on Rachel's boyfriend, Brady (Sasha Jenson). Kelly and Brady hook up (a big no no in Slashers, of course), and then soon after Michael magically appears, as he does. When he goes for Kelly he picks up the shotgun nearby but instead of shooting her he stabs her through the gun with the barrels of the gun, pinning her to the wall. This is the kind of dumb crap Jason would pull in one of his movies, but it's absolutely not believable from a mortal man. Plus, even after killing her there's still no gore. It just happens and then the film moves on.

I struggled to find anything to enjoy in this film. The performances, up and down the cast, were average at best. There aren't any scares, no gore or decent death to appease my lizard brain, and the rest of the movie just plods along waiting for Michael to show up. In a lot of ways it reminded me of Halloween II, just with less gore (and nudity), making it an even more inferior sequel than that botched second film. The one thing the film accomplishes is that it resurrects Michal Myers. Everything that happens in the 90 minutes after makes me question why. 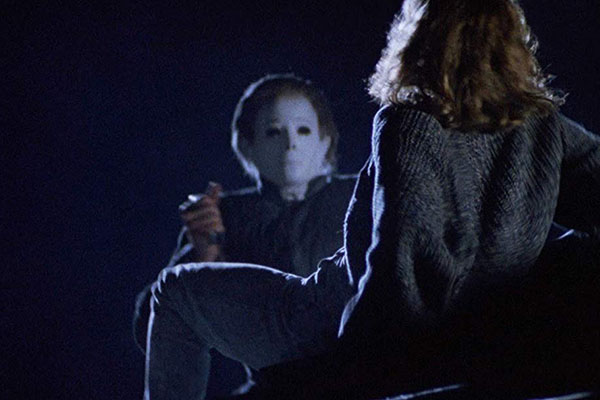 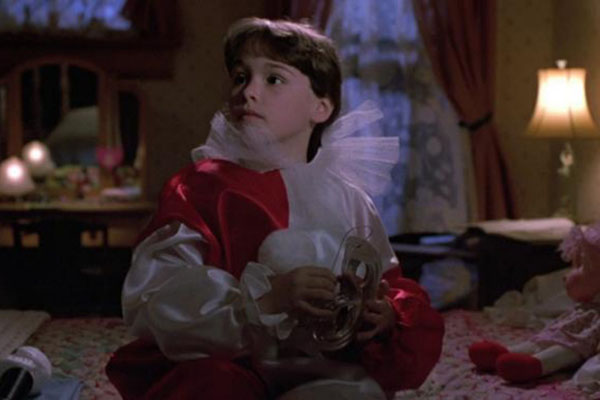 The fact is there was no reason to bring Michael back except to have his name, prominently on the marquee. The selling point of Halloween 4: The Return of Michael Myers was that Michael Myers was back, a huge deal after the implosion that was Halloween III. But beyond having the idea to bring the Shape back, the film comes up with nothing else new to say or do. It just does what came before, just not as well. It exists, and fills some fanboy's need for more of the same, but it doesn't have the intelligence or creativity to try or say anything new on the subject. It's just more of the same, end of story.

It's sad, really, because there was the potential for new ideas in this series. However bad Halloween III was (and it truly was terrible), the idea of an anthology series was a decent one. Instead of bringing Michael Myers back what if this film had gone back to Haddonfield (Halloween 4: Back to Haddonfield) with people slowly getting back into the spirit of the holiday. Maybe this film could have been set on the first time the town has allowed trick-or-treating since the Shape killed all those people ten years earlier. But then, naturally, bodies start dropping and everyone worries is Michael, somehow back from the dead. It wouldn't be, of course, because that's stupid, but it would allow for a mystery about what is going on and why everyone is dying while, at the same time, setting it in a location people know, one based in a reality with grounded rules.

And it would clearly state that this doesn't take place in the same universe as Halloween III, since that movie went out of it's way to shunt the first two films into a different reality. That's a nice extra bonus that could have been; a slap against that awful movie and a reassurance to everyone in the audience that nothing bad will ever happen again. The film we got, The Return of Michael Myers, at least has the sense to avoid any reference to the third film. But any other film would have been better than what we got. Sad thing is, this fourth film still stands as the high point for the post Halloween III classic series. The next two films would be so bad that only a reboot could save the franchise...

Hubris, first on the part of the government that thought moving Michael Myers was a wise idea (because it obviously went so well the last time they tried it) and then on the part of the people actually physically moving the Shape since they didn't take the threat at all seriously.

An ambulance tech, followed by his colleague. Both were dumb enough to ride in a van with the Shape and dumber still in not expecting him to unleash his full fire and fury on everyone in his immediate vicinity.

Thirteen (that we see). There's two in the ambulance (with another implied), plus a mechanic, a gas station attendant, plus two cops (with more implied) and seven sad Haddonfield residents.

It's also implied that little Jamie kills at the end of the film, but I think they roll this back in the next movie.