Some of These Sucked, Let's Try Again

I think we can all agree that by the end of the sixth film, Halloween: Curse of Michael Myers, the HalloweenThe franchise that both set the standard for Slasher horror and, at the same time, defied every convention it created, Halloween has seen multiple time lines and reboots in its history, but one thing has remained: Michael Myers, the Shape that stalks Haddonfield. series was in a pretty dire place. One bad sequel was followed by an even worse one, and eventually nothing about the direction of the series was working. For many of us it seemed like the best idea for everyone involved would be to put the series out to pasture and maybe try something else instead (Scream had come out a couple of years earlier and re-energized the Slasher genre, and this was just one year after the travesty of Halloween 6, so there was clearly still life in the concept of the Slasher). 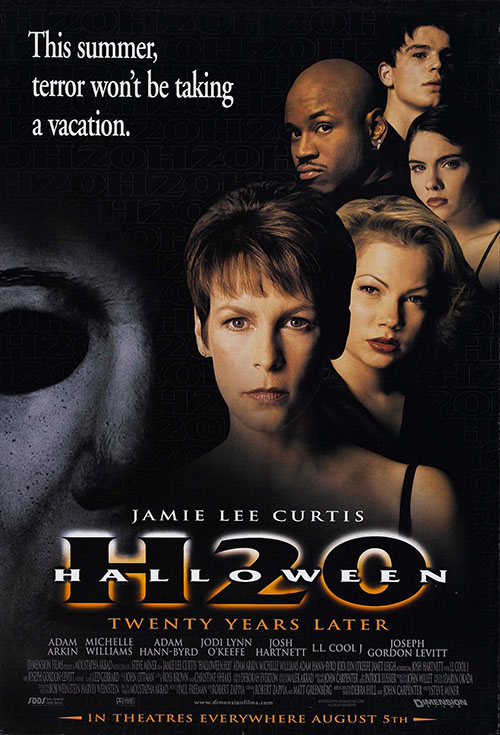 Of course Hollywood hates to let go of any idea, no matter how much it might not have worked in any of its successive sequels. Halloween had been a smash hit once. It could do it again. Thus the brains behind the series decided that the best thing to do with the franchise would be to hire the writer behind Scream, Kevin Williamson, and put him in charge of writing the new movie. This lead to the development deciding that everything after Halloween II should just be thrown away (which, having gone back and watched them all, I'm kind of okay with) and the films would start fresh with a new, official third film.

That's how we get Halloween H20: Twenty Years Later, a film with a title that's just just a reference to the fact that this was filmed twenty years after the original but also the fact that, within the story, Michael has been missing for twenty years. As we learn, after the battle between Loomis, Laurie (Jamie Lee Curtis, reprising her role for this new film), and Michael -- in which Michael was blinded, blown up, set on fire, and seemingly melted, remember -- the body of The Shape disappeared. In the twenty years since Michael has never been spotted leading most people to assume he died of his wounds and the corpse just failed to show up. Laurie, though, knows differently deep in her gut. She assumed Michael is still out there, waiting, so to prevent him ever finding her, Laurie faked her own death (with the help of Loomis), took on an assumed identity, Keri Tate, and settled down to have a different family far away from the horrors of Haddonfield.

Now, two decades later, the horror is coming back for her. Michael, now ready to resume his attack on his family, tracks down a nurse, Marion Chambers (Nancy Stephens) who had the old notes on the Myers case. This leads Michael (after killing the nurse and two neighbor kids nearby because that's what you do when you're a mass murderer out on the town) to figure out that Laurie is still alive. Armed with her name and address -- she works as the headmaster for a boarding school -- Michael heads off to find his sister and kill her, her son John (Josh Hartnett), and everyone else around them because killing is what he loves to do.

In its original concept, Halloween H20 was going to be a straight sequel, one that tied into the events of the previous six films (well, minus the unrelated Halloween III: Season of the Witch). During writing and production, though, the film was changed to just be the reboot we have now and I do think that's one of the smarter ideas this film presents. Retconning Laurie to have faked her death after having a child, Jamie, only to then go off and start a new franchise family elsewhere would have cast the character in a bad light. She has a son here she cares about dearly, but what about Jamie? Didn't you care about her while she was chased around by Michael for three increasingly stupid movies? What makes your son so much better? 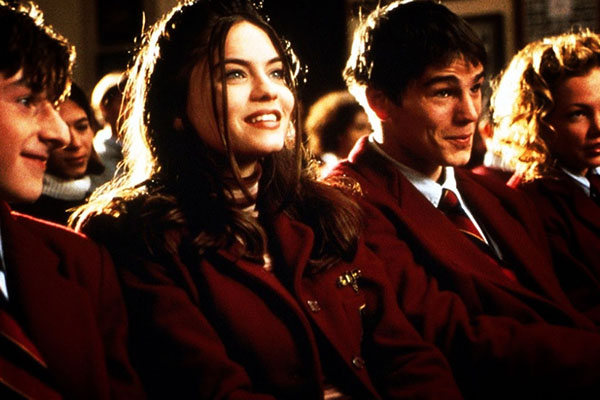 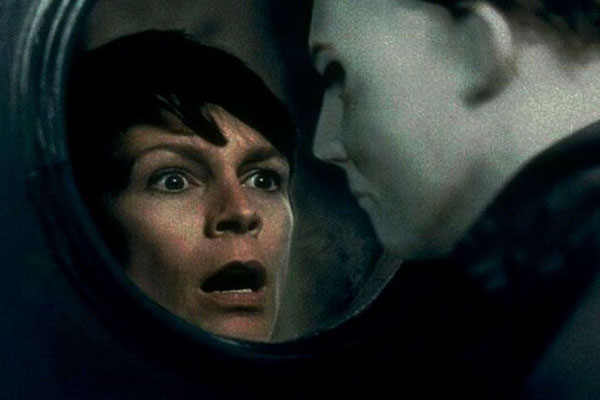 These were questions I asked the film the first time I watched H20 because I didn't pick up on the fact that this was a reboot, a new third film in the series instead of the seventh in continuity. The fact that the film isn't that great at explaining it's reboot is one of the things that detracts from it, as is the fact that this only came out three years after the previous effort. One way or the other it doesn't really feel like Michael has been gone for twenty years because, really, he hadn't. So whenever the film tries to paint Laurie as crazy for still worrying about Michael, we know the truth: he's still out there because he's been stalking her family (in her absence) all this time. She may have been able to avoid him but he still was waiting for her.

Flaws with the setting aside, H20 is one of the more assured films in the series. Taking pages from Scream, this film is very focused in style and tone. Gone are many of the trappings that had steadily worked their way into the films -- the goofy music, the silly tone, the dumb characters inserted for no reason (and then acted poorly to boot). This film feels like it studied what Scream got up to and tried its hands at the same effect. And it works... for the most part. This is one of the better, more interesting films in the series and it's a credit to the team working on the movie that they were able to pull this series out of the abyss it had fallen into.

The best part of this renewed focus is that this is the first Halloween film since the first that was actually genuinely scary. There are a few moments in the film that really clench up the terror nerves, that make the viewer squirm. It's all down to tension to the build up to the inevitable, that then leads to either a kill or a feint away. H20 is assured enough that it not only knows how to build the tension but it also know when not to release, to dodge out without immediately taking the first kill it can get. The film, in many sequences, knows exactly what it's doing and it handles itself really well.

That said, the film still isn't quite able to reach the heights of the original. While it manages to put up a good game in the middle part (after wisely taking its time, cooling off for a long stretch after an initial killing spree), the film falls apart in the back half. Here the film goes from Michael stalking and killing everyone, slowly and brutally, to a one-on-one fight between Laurie and Michael and it's clear both characters have plot armor. Once the film becomes one-on-one, we all know the Final Girl is going to live. And, no matter if we think Michael is going to die at the end of this film or not, it won't really be a death because the studio will find a way to retcon it out for the next movie (which they did, for Halloween: Resurrection). 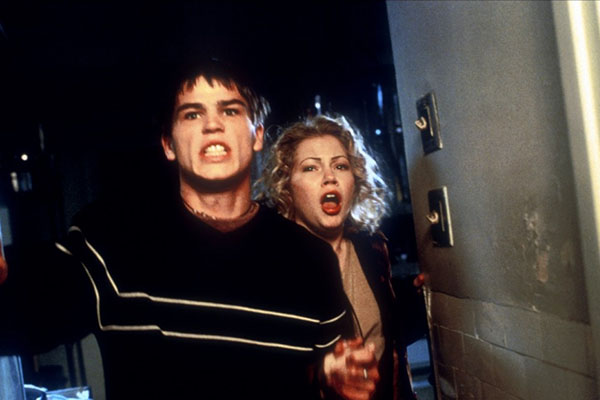 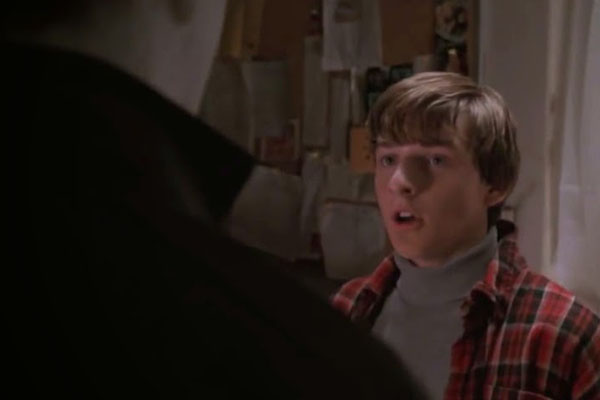 Plus, frankly, there are still a few things I would have cut from the film to tighten it all up. There's a character, the security guard Ronny Jones played by LL Cool J, who serves as the comic relief of the movie. While he's amusing in the early stretch, he becomes a distraction later in the film and ruins the tone of the scenes he's in. Then there's Laurie's boyfriend, counselor Will Brennan played by Adam Arkin, who should be a great character, someone to stabilize Laurie and give her more to fight for. And he would be... right up to the moment he's killed and cast aside, never to be mentioned again. Neither of these characters add much to the film and simply pad out the runtime.

In fact, in the case of Arkin's Brennan, I have to wonder if there's a draft somewhere that has him as the real killer. There's something to Arkin's performance than always makes me thing he's secretly a serial killer, that somehow he came to the school to stalk Laurie Strode because he was inspired by the events of Haddonfield. Now, twenty years after that killing spree, he's ready to pick up where Michael started. That's a very Scream-style script, something that seems in line with Williamson and his kinds of stories. It certain seems more interesting to me than just rebooting the films and bringing Michael back once again (even if this does at least get rid of the Druidic Death Cult, and thank gods for that).

Within the bounds of the Halloween series, H20: Twenty Years Later is a pretty good flick. It's a solid effort, one that actually does a better job of being a scary Slasher flick than any of the films to come out since the first one. But, when compared to everything else the genre was doing, this film still feels like a bit of a misstep. It's a bit safe, a bit clunky, and still not quite ready to reinvent itself with any of the daring of the modern Slasher movies. Michael and Laurie both came back but, in the process, they brought the same old movie with them.

The sinning doesn't really come until after the first few killings. Despite the promise of pre-marital sex and lot of drinking, the first real sin is failing to follow the protocols of a workplace environment. By that I mean that the headmaster (aka Laurie Strode( kisses her boyfriend, the guidance counselor, during work hours. How sinful!

We actually get a three-fer in quick succession. The film opens with the nurse and two teens helping her out. After the nurse gets scared because she thinks Michael Myers is in her home, she runs next door only to find the two teens are both dead (sadly, off screen but their bodies are shown at least). The Michael appears (because of course he does) and, after a fight, slits her throat. It's a decently tense little scene that works well enough, especially when compared to many of the kills from the other sequels

Six. The three at the start of the film, plus two students and a teacher.