As noted in my review for the original Halloween, that film is a perfect little slice (pun intended) of Slasher cinema. Everything about that production is designed to amp up the tension of the piece, and while the kill count isn't all that high, it's one of the scarier films in the genre. Although there were a splattering of Slasher films before Halloween, that film really popularized the genre and set many of the conventions in place, from the slasher came to the masked killer whose face you never really see. Plus, Michael Myers, aka the Shape, cut an imposing, almost impossibly big figure, and many of the films in the genre to come after it took that kind of killer and ran with it (most obviously Jason from the Friday the 13thOne of the most famous Slasher film franchises, the Friday the 13th series saw multiple twists and turn before finally settling on the formula everyone knows and loves: Jason Voorhees killing campers 'round Camp Crystal Lake. series). 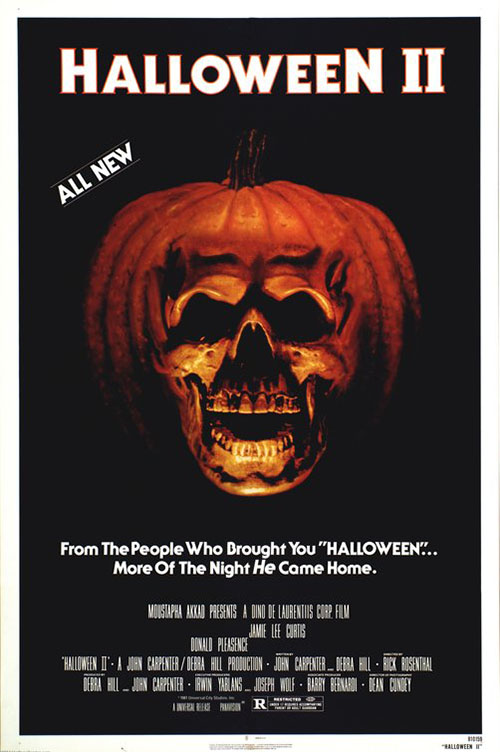 Of course, with so many releases in the genre after 1978's Halloween, Slasher cinema quickly evolved. Bear in mind that the Friday the 13th series already had cranked out two films by 1981, along with films like Prom Night, My Bloody Valentine, Bloody Birthday, and on and on. So when a Halloween sequel finally came out three years after the original, it was to very different expectations from audiences. That explains, in part, why Halloween II feels like a very different movie from its predecessor.

Picking up directly after the events of the first film, literally on the same night, Halloween II opens with Michael Myers disappearing into the night after being shot repeatedly by Dr. Loomis while Laurie, injured in her battle with the Shape, is rushed off to the hospital to get all bandaged up. The cops, and Loomis, start scouring the town looking for the masked killer, but they really should have just gone to the hospital themselves, or maybe put some cops on the place to guard it, but soon after Myers wanders to the hospital himself to continue his killing spree. Like a man possessed, the only thing Myers wants to do it find Laurie and kill her, like a white whale that's slipped from his view. So he cuts a bloody swath across the hospital, killing everyone one in his way to reach his target. But it'll take the combined smarts of Laurie and Loomis to potentially survive this night.

Why is Michael obsessed with Laurie? It's not just because she got away from him, although as per his modus operandi in the first film, he really does like to stalk one girl until he's managed to take her out. No, the sequel has to add a new layer to the Michael/Laurie dynamic. Namely, Laurie is secretly Michael's sister, born after his murder spree and then adopted when their parents died. Somehow Michael knows this and that's the specific reason he's come after her, time and again, over these two films. This is also the first real issue I have with Halloween II: it tries to explain Michael's motivation. As a Shape that just stalks and kills, Michael is an effective killer. By trying to give him background and shading, though, they dilute his mystique. It's not enough for him to be a killer, he has to be motivated, he has to have a reason, he has to have a target. The terror derived from him in the first film, of this random killer just picking someone to kill because he can, is lost under all this explanation.

Not that the Michael we see in this film otherwise reflects the killer we saw previously. The original Halloween plays into the standard conventions of the Slasher genre. Specifically, teens would get promiscuous, drink and do drugs, and then get killed. Halloween uses this, with Laurie's friends getting bumped off one by one until the Shape comes after our final girl. This ties in to his first kill, where Michael takes out his older sister, 15 years earlier on Halloween night, and it sets up his M.O. Even the first kill in this film, where Michael takes out a teenage girl in her house, a murder of opportunity, seems to tie into this M.O. 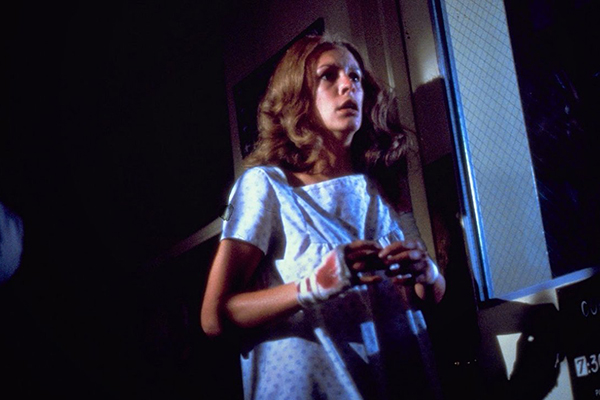 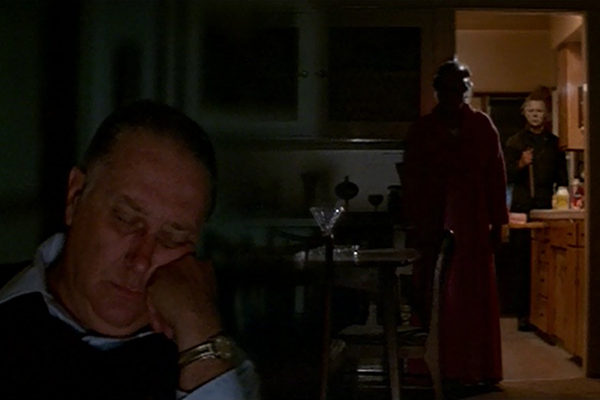 But then, for the rest of the film, Michael doesn't really seem to care about taking out teenagers anymore. His whole motivation, fueled by his promiscuous older sister, to kill teenagers for being sinful (or whatever) is ditched so he can go on a murder spree killing anyone that gets in his way. In this regard he's much more like Jason, who took over the murder business from his mother in the second Friday the 13th, and basically killed anyone that got in his way. Jason was a murder machine, but the Shape was seemingly fueled by a specific motivation and this movie, one sequel in, had already lost sight of that.

There's also the fact that the kills as gorier and yet, somehow, less scary. The original film took its time to get to the killing, spending a good portion of its runtime simply having Laurie go about her day while the Shape crops up just out of shot, spying on her to build tension but not giving us a murderous release. This film, though, doesn't bother with any of that. The kills start within the first few moments and continue on, at a regular clip, with very little in the way of tension built up between. The kills in this movie, honestly, remind me of most of the kills from the Friday the 13th series where someone would wander off on their own and the Jason would magically appear behind them like clockwork. I had issue with that kind of kill style in that series -- it's tedious and expected -- and I have issue with it here.

There was a magic quality to the way the original Halloween handled its horror and this film fails to recapture that magic in any way. This despite having John Carpenter involved in the production. Part of the problem, I'd say, is that Carpenter didn't also direct this film. Carpenter understood the delicate balance of tension and kills but first time director Rick Rosenthal was unable to strike that same balance. It's almost like he prepared for the job watching other Slasher films instead of studying the master class that was the original Halloween. It's not the body count that matters in this film but how the kills are used effectively and Halloween II misses that mark completely.

Even the music, the co-star of the original movie that helped to set the tone for every scene, just feels off this this time around. Instead of the haunting piano compositions of the original, the score was reworked on synthesizers and the electronic version lacks that same creepy punch of the original. Plus the film liberally uses the song "Mr. Sandman", a fun little ditty that feels out of place among Carpenter's compositions. Plus the scenes scored by the music don't seem to effectively know how to use the songs or which of the key pieces to play when. It's a muddled affair, leaving the viewer wanting in all regards. 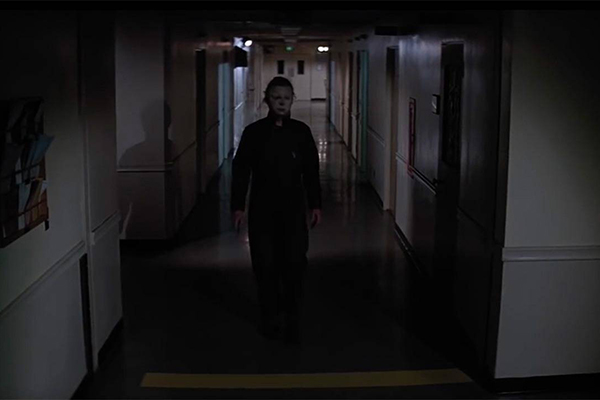 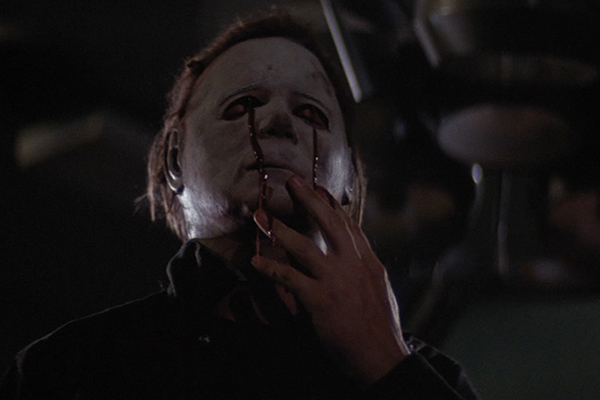 The thing is that, when you look at the later films in the HalloweenThe franchise that both set the standard for Slasher horror and, at the same time, defied every convention it created, Halloween has seen multiple time lines and reboots in its history, but one thing has remained: Michael Myers, the Shape that stalks Haddonfield. series, the mediocrity makes Halloween II seem good by comparison. Heck, most Slasher flicks aren't nearly as effective as 1981's Halloween II, so I don't want it to sound like I completely hate this movie. As far as standard genre fare, Halloween II stands above most Slash films ground out in the late 1970s and most of the 1980s. It's a decent little killer with plenty of gore, a bit of nudity, and a lot of death. Most Slasher fans would enjoy this film without complaint.

But we can't view Halloween II without comparing it to what came before, and in that regard the film fails to pass muster. The original film is so good, from its direction to its story to its musical composition, that the sequel feels like a pale imitation. It's fine, but not great, and with a name like Halloween we wanted greatness. Sadly, the series would continue to slide down hill from here...

Gossiping. The first teen we see Michael go after is at home, alone, and just happens to be the first unlucky girl he sees. After she hears her elderly neighbor lady scream, she calls up a friend to talk about it.

After chatting on the phone with the friend (I think it was a friend since she was acting rather familiar with them), Michael comes up behind the poor teen and stabs her dead. People need to learn to lock their doors.

Ten. A teen, a stupid trick-or-treater, a rent-a-cop, an EMT, four nurses, a doctor, and a real cop.