When I was preparing for the HalloweenThe franchise that both set the standard for Slasher horror and, at the same time, defied every convention it created, Halloween has seen multiple time lines and reboots in its history, but one thing has remained: Michael Myers, the Shape that stalks Haddonfield. series, getting ready to watch all of them, one by one, I knew that getting through this sixth film, Curse of Michael Myers, was going to be a slog. Long ago, back when I worked at Blockbuster Video (back when that was a thing) I watched through all the films in the series (that were out at the time) and this one, Halloween 6, stuck with me as being the absolute worst of the series (although this was before the eighth film came out, so I might end up reassessing that opinion). I was dreading having to go through this film again. 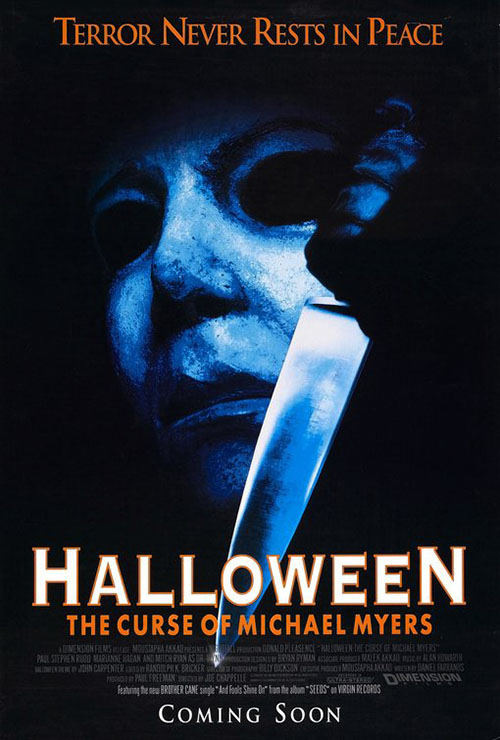 There is a reason that Halloween 6 is often considered the worst of the initial run of movies (the Laurie Strode duo plus the Jamie Lloyd trilogy). It had a very troubled production, one that burned through multiple scripts and ideas, that struggled with casting, all for a film that was hated in test screenings, had to go through extensive re-shoots, lost a star due to their untimely death (RIP Donald Pleasance), and even then still came out as bungled, awful mess. I don't know if there's anything that could have saved this film, short of just not making it, but because it's out there I had to suffer through it.

It's been six years since Michael Myers was last seen (in Halloween 5: The Revenge of Michael Myers), six years since he last terrorized Haddonfield. In that time poor Jamie Lloyd (now played by J.C. Brandy), daughter of Laurie Strode, has been captured by a crazed cult dedicated to druidic magic and the night of Halloween. They want to continue Michael's reign of terror, to use his power for their own (not very well explained) means. So they capture a pregnant Jamie (or impregnate her, which is just wrong) and then keep her around until her baby is born. However, baby in hand, a nurse free Jamie and helps her escape the evil cult's medical facility (conveniently placed nearby Haddonfield). Jamie is able to hide her baby away but, sadly for her, Michael soon catches up and killed the teen (because that's what he does).

Jamie might have been lost, but that doesn't mean the story is over, as another returning character, Tommy Doyle (now played by Paul Rudd in his first film role), finds out about Jamie's escape and tracks her path through Haddonfield. He stumbled on the hidden baby and takes it back to his place which is, of course, right across the street from the old Myers home. He's been keeping an eye on the place for years because he feared the eventual return of the Shape. And while he's been watching the place he's seen the Strode family, cousins of Laurie, for some reason move into the Myers home. This includes Kara (Marianne Hagan) and her son Danny (Devin Gardner). Tommy fears for the safety of the Strodes now that it seems like Michael is back. It'll be up to Tommy and Kara to keep the little baby, as well as Danny, safe from the danger and influence of Michael as this haunted Halloween night.

It's fair to say that Halloween 6 was hobbled in part by the ending of Halloween 5. In that movie some dude in black showed up, stormed the police department that had Michael in chains, killed all the cops there, and then freed the Shape for reasons only he knew. This sixth installment had to somehow explain what the hell happened and spin it into a believable story. The problem is that while it did the former -- the Man in Black is part of the Halloween Druidic Cult who what's Michael for his death magic that makes him immortal -- no part of that story makes sense or is believable. 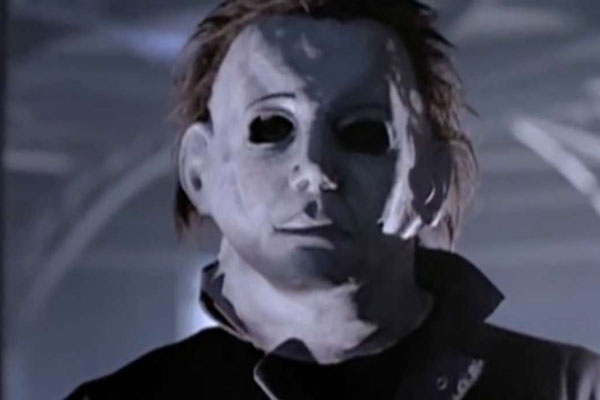 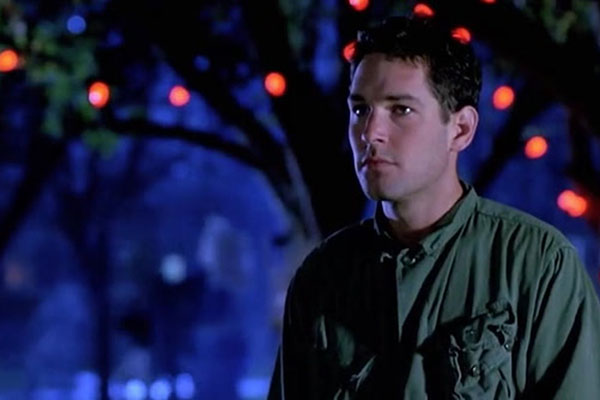 Let's start with the first issue in the story of this movie: there is absolutely no need to explain who Michael is or what he kills people. The first movie established that he was just a deep, black void, a creature with no humanity or remorse. That's all the explanation we needed, but after the first movie the series kept going, making his deaths at the end of each of the films harder and harder to come back from. The fact that he survived being exploded, burned alive, and effectively melted at the end of Halloween II already stretched credulity. The series never tried to say he was immortal up til now, it just pretended he was so it could keep bringing him back. Still, even then, we didn't need someone to say, "he's filled with runic magic and is immortal." That's just stupid.

Really, at no time did the series need to work in magic or druids. The whole point of everyone collectively saying "Halloween III: Season of the Witch was a stupid piece of shit, so let's bring Michael back and pretend that film never happened," was so we never had to have druids or magic in the series ever again. And yet, the creators of this film decided runes and magic were necessary to make a good film. They weren't, and Halloween: Curse of Michael Myers is far from a good movie.

Like, for starters, what's up with the baby? Were they planning to transfer Michael's power to the baby? Is that even possible? And if it isn't, was the baby just bait to lure Michael to Haddonfield? In theory the Man in Black should have already had control of Michael from the last movie so why is the baby needed? And how did they plan to use the baby, or Michael, or the runes, or anything? Nothing here is clear or makes sense.

And then there's Danny, the kid growing up in the Myers house. Somehow he has a connection to Michael because he grew up in the house. Except, at the same time, he totally doesn't because Michael 100% wants to kill him simply because he exists. Michael cuts a bloody swath through the whole of the Strode clan (which just proves that they shouldn't have moved into his house, or lived anywhere near Haddonfield for that matter), and while Danny for some reason hears Michael's evil voice in his head (at least, I think that's what he's hearing as the movie itself, as with everything, is unclear), Michael still wants him dead. Really, the fact that Danny can hear Michael in his head does nothing for the story as it fails to show any kind of connection between the two characters and, also, doesn't cause Danny to go on his own killing spree. There was no point to it. 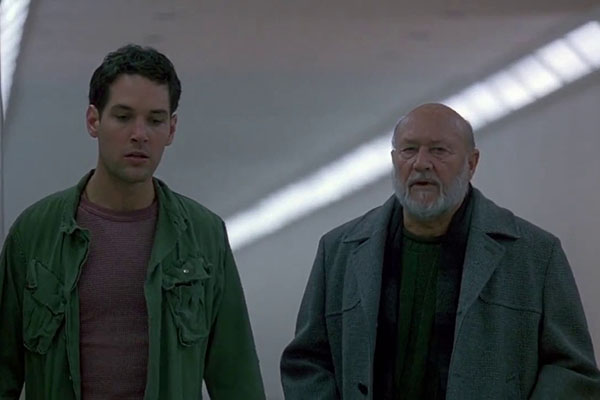 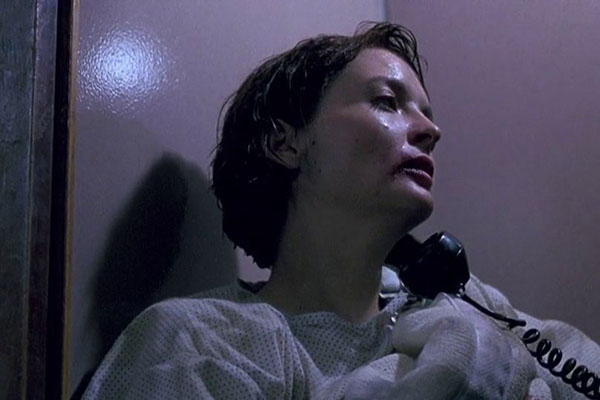 The best character in the film is Tommy, and that's simply because he's consistently written and well acted. Paul Rudd, in his first big role, does a decent job of investing in Tommy, as much as is possible anyway for this shitty movie. It's just tragic that the film doesn't really have much for Rudd to do besides be a quiet, stoic hero. Rudd is a charismatic actor and this film wastes the potential we all now know he had. I'd honestly be interested to see a return of Rudd as Tommy in a future Halloween film just to see what he'd do with the character now.

And then, beyond all of those issues, there's the fact that Curse of Michael Myers isn't scary. Like, at all. As has been the case with all the later films in this series, the movie rushed through kills, one after another, without any prelude or foreplay. You see a character, they wander someplace dark, and then Michael is there and the character dies. Repeat that for every death in the film and you have the entirety of this movie. Gone are the days when Michael would spend half a film stalking, waiting, building the tension. There's no tension here, as well as a piss poor amount of gore, making this film to be a total snooze fest start to finish.

This is the first time in twenty years I've gone back to watch this film again and it was just as bad this time around as I remember. There are people that claim the film is better than it is, that there's redeemable qualities to the film. From this second viewing I have to say that I have my doubts. The film I watched, the theatrical cut of the movie (there is also a "Producers Cut" of the film, but I'm not gonna bother with it as I've suffered enough), is trash, through and through. Boring, tedious, and nonsensical in equal measure, Halloween: Curse of Michael Myers is easily the worst film in the series I've seen so far.

Sadly, soon enough that title might get stolen by a later entry in the series...

Stalking and peeping. Paul Rudd (because he's too recognizable at this point to think of him as anyone other than Paul Rudd) creeps on his neighbor, watching her from across the street and taking pictures of her while she's changing. Of course, he's the hero of the film so his sin, for once, doesn't lead to his death.

A nurse comes to save the now grown up Jamie. During their escape, though, Michael chases them down (slowly, as he does), catching up to them and ramming the nurse's head on a spike. Just a random spike, on a wall, in the middle of a hallway for no reason except to have a nurse's head skewered on it. It's that kind of movie.