growing up I used to grab Blow Pops all the time. Those big, chunky lollipops with a solid piece of gum in the middle were always an awesome treat and I loved trying out all the flavors they had. Blow Pops added more flavors, most famously the Blue Razz that, I could swear, kicked off the whole blue razzberry movement in candy, before them putting out Super Blow Pops, Sour Blow Pops, and a bunch of other flavors. And then, at some point, that all went away and I stopped seeing the candy everywhere. 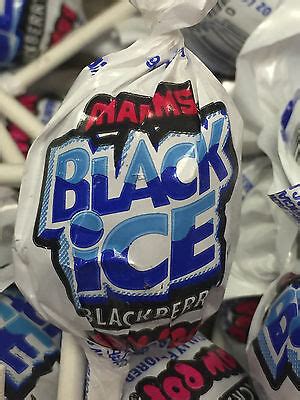 I did recently find a small display of flavors at a convenience store, and it wasn't just the usual flavors of grape and apple and the like. Instead it was three special flavors they had out (for who knows how long): Black Ice, Cherry Ice, and the return of the original Blue Razz. Feeling that classic craving once more I grabbed one of each of the flavors and knew I had to sample them for the site. It was time for a return to the Blow Pop domain.

This was the flavor I was most excited to try as it didn't seem like it would just be an imitation of a flavor the company had put out before. Blue Razz was going to be Blue Razz (and we'll discuss that below) while Cherry could be interesting or just another cherry flavor. Black Ice, though... what would that be. Could it be a blackberry, or was it going to lean on the "Ice" and do some kind of mint. Frankly I didn't want mint and was dreading (an excited kind of dread about) what I'd gotten myself into, but I still unwrapped the pop and sampled it first.

Thankfully there is not mint flavor in this "ice". The Black Ice pop denotes two things: one, that the pop itself is translucent, a clear-ish color instead of being black or purple or whatever like the normal pops, but also two, it was indeed a blackberry pop. Well, "blackberry" as it's hard to create that flavor from sugar and syrup. The pop certainly had a flavor that could be likened to blackberry, but it also could have just been called "very toned down grape" and I would have believed it to.

The flavor was, overall, quite subtle. If you've tried Blow Pops then you know they can be pretty strong, a solid fruit flavor in the mouth like the pop is made from condensed syrup and not much else. This was much more delicate, almost too delicate. I liked the flavor of the pop but I didn't find it outstanding. It mostly tasted like sugar with a hint of berry flavor while I was expecting BERRY right up front. Again, I dunno how you do that with blackberries since that fruit itself has a more delicate flavor so, maybe, this was about right.

Overall it was a decent pop although I don't know if its one I would get again. It was fine, but I think I'd rather just be assaulted by the flavor of a grape pop instead.

Cherry is a classic Blow Pop flavor. For the Cherry Ice version I expected something more, like the cherry flavor but in a clear pop or something. I had high expectations for presentation after the Black Ice pop, that was for sure. But, instead of another cool looking pop with an interesting flavor, Blow Pop's Cherry Ice pop is a Cherry pop with a different wrapper. There's nothing fancy about this one: it's cherry just like they've been making for years, decades even.

Cherry is one of Blow Pop's better flavors, and it sits right up there with Grape and Sour Apple as the flavors I seek out when I want one of their pops. But calling a standard Cherry pop "Cherry Ice" implies there will be something more to it. There wasn't; this is cherry, and it's good cherry but I could already find good cherry Blow Pops when I was desperate for one. I wanted something more and this failed to deliver. Grab this only if you can't find cherry elsewhere as Blow Pops shouldn't be encouraged for their laziness.

The last of the "special" pops I found in the display, this one at least does feel special even if it's just a re-release of a classic pop. While the main flavors of Blow Pops have lived on, albeit in smaller displays at convenience stores, Blue Razz faded away. I hadn't seen one of these pops in a while so it was actually kind of a treat to see the blue flavor triumphantly return once more. It had the classic looking wrapper, that proper smell (and I imagine someone rolling it like a cigar now). This wasn't re-branded with an "Ice" or anything, it was just Blue Razz.

The pop is exactly like you remember it if you ever had one before. It's shockingly blue out of the wrapper and smells like, well, Blue Razz. The thing about this flavor is that it's had to describe it as anything other than Blue Razz. It doesn't have tones of grape or apple or some berry, but it does taste exactly like what you'd expect from blue were it given a sugary flavor. It hits your tongue and its exactly like what you expect, a berry flavor that hardly tastes like a berry but there's no other word for it that you could use so it's just... razz.

And it's still great. If you want that classic Blue Razz flavor this pop has it exactly. This is the flavor that all the other blue candies that came out were trying to emulate. Even if Blow Pops weren't the first to have Blue Razz they certainly perfected the flavor as this is exactly the flavor I think of when I pick up a blue candy. This is the pinnacle that all other blue candies are judged against. Is it good? That depends on what flavors you like, but if you want to taste blue then this is the pop for you.

I could live without Cherry Ice, but I won't mind if Black Ice sticks around. Hands down, though, I want to see Blue Razz continue on. This was the flavor my inner eight-year-old didn't realize it was missing.