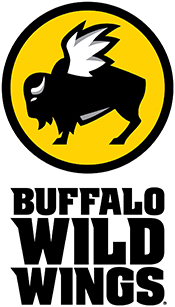 Buffalo wings are a prized treat in the pantheon of Geek activity food items. Due to their ease of eating -- no forks -- they're right up there with pizza and burgers, as you can continue to do many activities (like roll dice) without having to put the food item down.

In the world of people serving buffalo wings, one of the more popular establishments is Buffalo Wild Wings. Established years ago in the buffalo capital of... Columbus, Ohio (somehow that doesn't sound right), BW3 (standing for Buffalo Wild Wings and Wecks --some type of regional roll) became famous for its variety of wing sauces and seasonings.

The food is quite good. The fourteen-plus dipping sauces BW3 offers give a wide range of flavors, allowing anyone -- from mild lovers, to those with a desire for sweet and tangy, to those looking for a truly hot experience -- to find the kind of wings or other dishes they'd like (for any occasion). The wings are always well cooked, the sauces always flavorful. For the wings lover, you'd be hard pressed to find a better buffalo wing.

Additionally, BW3 has a variety of other food items, although not all are as good as their wings. Their ribs are decent, although nothing special, while their burgers are fine, but you can get better burgers from specialty establishments elsewhere.

They serve a plentiful selection of appetizers, although the size of the portions can vary wildly from store to store (and even what time you get to any particular store). A basket of mini corn dogs could be filled one day and barely large enough to qualify as a snack the next. That said, when you do get a large appetizer, it's nearly a meal itself. And, generally, their appetizers are among the best items they serve -- after the wings, of course.

On the low end of the food scale are their wraps, of which the best or only mediocre, while their worst are bland and truly uninspired. From a restaurant that serves such delicious, inspired wings, you'd expect their wraps to be something more than a tortilla filled with iceburg lettuce, some chicken, maybe some cheese and tomatoes, and sauce. None of the wraps can come close to anything you'd get from Subway or Quiznos (depending on if one of those stores serves wraps in your region), and considering the price difference between BW3 and any sandwich shop ($7.50 at BW3 -- without drink -- in comparison to $5.00 for a full combo at Subway), getting a wrap at BW3 just doesn't make sense.

So, really, the best part of BW3 is the wings. They do a lovely set of wings, and it's the best and only reason to go... just, don't dine-in.

The eating experience at BW3 is something akin to if a sports bar and a fast food restaurant had a screaming, obnoxious love child. No matter the time of day, some sports program will be playing -- usually at a high volume -- on the TVs. Having a conversation in any of the restaurants is hard, and sometimes the volume is so loud (especially during a big game) that even the servers can't hear you well enough to take your orders.

That is if the servers even bother to pay attention to you in the first place. Many of the locations this writer has gone to seem to be populated by the most disinterested staff ever. It's not an uncommon occurrence to go to a store only to sit for 10 minutes before your gracious server deems to honor you with their presence.

Now I'm certainly not going to say that every server in the corporation is like this -- there are the good servers as well as the bad, those willing to actually be attentive and courteous to their customers (you know, the people actually paying them for their service), but the proportion of good to bad seems to be weightier on the "bad" end than at other establishment within the same price range.

From experience, it doesn't seem like complaining to the management does much to alleviate the problem, as usually the managers (at least the ones this writer has talked to) are somewhere between uninterested and barely apologetic. One manager of recent memory even blamed the writer and his party for their bad service (claiming that if the service was bad we should have worked harder to make the server serve us -- a truly bizarre claim when you think about it).

And this level of "caring" extends to the front staff as well. The hosts and counter staff usually seem like they are there only to collect a paycheck and really don't want to help anyone. Having worked in retail and food service before, this reviewer can recognize this as he felt the same way during his tenure in the industry. The key though, the defining rule of customer service, is that no matter how much you don't want to be there you never let the customer know that.

So it's a sad thing to try and actually eat at Buffalo Wild Wings. It's just as bad ordering carry out at the counter as it is getting food at a table. The only way this reviewer has managed to have a decent experience (with decent being only relative to the situation) is to call ahead and order, then drive over, pick up the food, and go home (praying that there were no mistakes made during the food prep).

Of course, this "good" experience is truly only had so long as you're getting the wings. Go somewhere else for just about anything else you'd want.