I don't normally do food reviews. Although I don't find these kinds of articles as hard to write as, say, music reviews (since the terminology and background knowledge you need for food isn't as bad as all the timings and notes and rhythms and history for music), restaurants don't sit in the same geeky pantheon as movies or comics. Sure, you need food for a game night, and yeah, certain restaurants are like geek bait (such as Buffalo Wild Wings), but we don't talk about food in the same way we discuss Captain America or Star Trek. 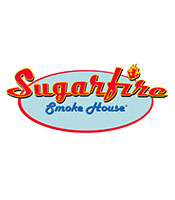 Still, every once in a while a new place will open up in town (Indianapolis, if you're curious) and I get a bug up to write a little something. Such is the case for Sugarfire Smokehouse, a St. Louis based chain (as so many BBQ joints are) that just recently moved into the city. Hailing from the South as I do (even if it was a very northern part of the South), I have an odd love for BBQ, so when Sugarfire opened up I felt it was my duty (nay, my right) to go give them a look-see. So far I've gotten three different meals from the joint and I have to say: Sugarfire is pretty good, especially considering the price.

Stopping into the restaurant within the first week of opening, the line was out the door (which is to be expected for a new joint). Because of this, I elected to take my food back to work with me as it was lunchtime and I only have so long on my break. To that end I got the Big Muddy Sandwich with a side of fries and then walked it all back to work.

This sandwich is a beast. I'm a devout lover of beef, and this big-ass sandwich delivered with a ton of brisket. They then covered it in smoked cheddar sausage, horseradish, lettuce, pickles, and BBQ sauce. It was, in short, too big to fit in my mouth so I ended up using a knife and fork. It felt like blasphemy to have to use utensils to eat anything from a BBQ joint, but that's the price I had to pay.

Flavor-wise, the sandwich was a knockout. The brisket was good, salty in the right way for smoked beef, and very moist. Like, super moist. A lot of BBQ joints end up chopping or shredding their meat before they set it aside to keep warm, but Sugarfire keeps their meats in large, smoked chunks and they only take slices off before serving. This kept my brisket so moist it was practically dripping.

However, the MVP of the sandwich was the sausage which easily outshone the beef. Those cheddar sausage slices were a dream, oozing with creamy flavor. I would easily go back for just the sausages as they were that good. 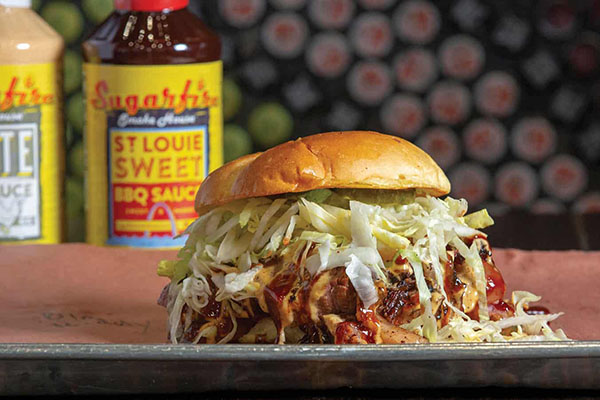 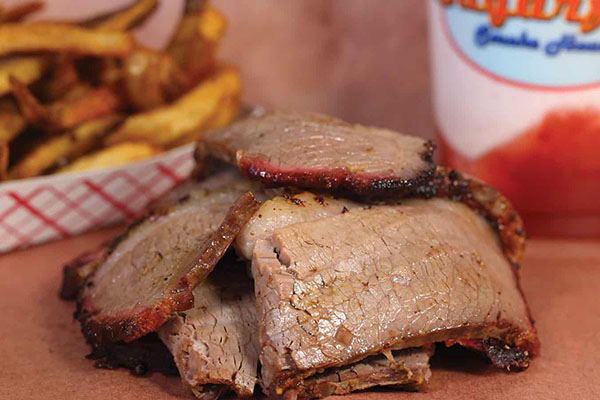 Bear in mind that the size of this sandwich is so big you could easily get two to three meals out of it. I wouldn't recommend getting this again as a single-person meal, especially not if you want your heart to survive the encounter. This is not a sandwich for anyone trying to eat healthy, but then this is a brisket and sausage sandwich so what are you doing ordering it if you have to worry about crap like that?

Of course, the sandwich was impossible to eat as it quickly lost all structural integrity once I got it back to my desk. Still the flavor was fantastic and, I assume, it probably would hold up at least a little better if I ate it at the restaurant instead of taking it to go.

I also got their fries and those were... fine. I recognize taking fries to go can be hit or miss -- fries do not always travel well. In this case the fries got very soggy and were not crispy like I liked. They were tasty, though, so it's a mix of good and bad. Your luck may be better, but I don't recommend the fries, especially if you need them to go.

My second visit to Sugarfire entailed grabbing a couple of small 4oz meats to supplement the lunches my wife and I brought with us to work. This time around I tried to be a little smarter and not get any large items, and to try some other stuff on the menu I got the smoked turkey. My wife loves brisket so that was also purchased.

Again, the brisket was great. It was once again outclassed by another meat as the turkey was sublime. Smokey and salt and moist, the turkey won me over. Poultry has a tendency to dry out during long cook session, like smoking, and turkey especially so (just ask anyone how many times they've had dry, overdone turkey at Thanksgiving). Sugarfire does turkey right, though. This immediately went on my list of things to get again, meaning I'm likely pairing the turkey with sausage when I get one of their combos.

Seriously, if you go there, get the turkey. It's an A-Plus.

Today's visit was a spur-of-the-moment decision. I had to make a run to the bank and, while walking back, I saw the BBQ joint and decided to pop in. I wanted something healthier so I elected to try one of their vegetarian options, their Portabella Sandwich. I'm glad I did. 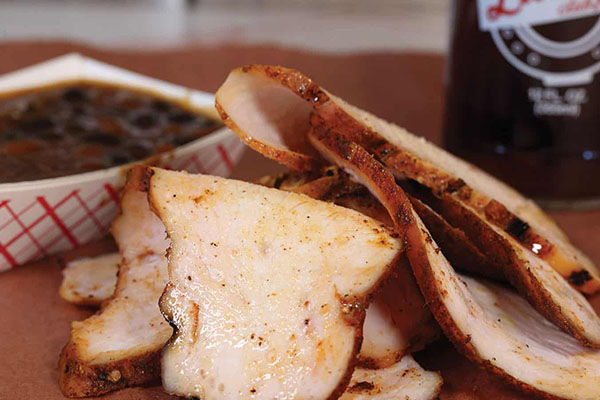 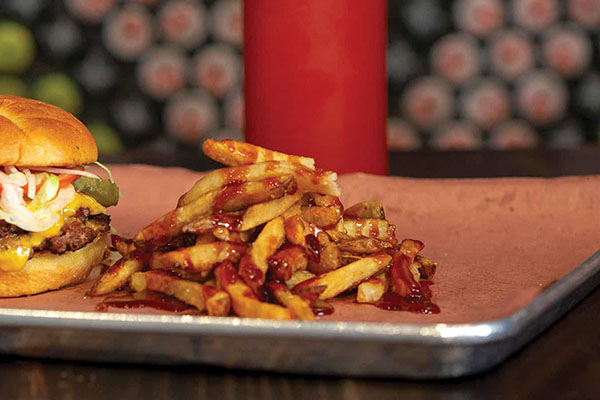 Like the Big Muddy, this thing is an absolute beast. It consists of two huge portabella caps, American cheese, special sauce, lettuce, sauteed onions, and three slices of bread. It's, essentially, a vegetarian version of the Big Mac's ingredients. Taste wise, though, it's altogether different. Because they're a smokehouse, the portabellas have been smoked and they have a richer flavor than I've gotten from portabellas elsewhere (not to mention a better taste than the patties in a Big Mac). They aren't as drippy as I'm used to from portabella sandies in the past, which is nice since this didn't immediately goosh all over my face the second I took a bite.

It does have the same issue my Big Muddy did, though: by the time I got it back to my desk the sandwich was starting to fall apart some. Part of this I blame on the American cheese, though, as it didn't act as a sticking agent, instead causing everything to slide around. Next time I'd probably get it without the cheese as I don't feel like it added much.

Along with the sandwich I also grabbed their potato salad. It's a pretty standard mustard/mayo mix with a hint of sweetness. While not bad, the salad is certainly nothing special. Still, it was more edible than the fries, so this wasn't a total loss.

Sugarfire is great, especially if you have certain meats you really want to get, or don't mind using utensils on your sandwiches. Their sides aren't anything to speak of, but the main reason to be there, the meats, knock it out of the park. if you have the time, and can avoid the lunch-time lines, I fully recommend checking them out.