It's Crunch-tastic! (Not Approved by Cap'n Crunch)

It's been about a year since I last did a look at various breakfast cereals. While I have been eating cereal during that whole time, I mostly relied on a few stand-bys: Chocolate Chex, Cocoa Peddles (well, actually, the Mom's Finest version), and more of that Eggo Waffles cereal (which is still so damn good... when I can find it). When you find a cereal you like it's hard to move away from it.

That said, I have found one new item I absolutely had to add to my regularly buying. We'll get to it, along with two other pretty solid entries. There are no bad cereals this time around (although I did buy a couple expecting them to be awful), so sadly there won't be a chance for me to rage. Oh well.

This was, for me, the weakest of the set I've tried over the last year. Recommended by a friend (after I raved about the next entry on this list), they said that Chocolate Lucky Charms were their absolute go-to now. That kind of bold proclamation have to be investigated, so the next time I went to the store I absolutely bought a box so I could try it out. As you should do with all cereals, I first tested it dry (to see if it was a proper "snacking" cereal) before pouring it into a bowl with milk. And the results were... okay.

Admittedly, Lucky Charms is not a sequel I seek out. It's find on its own, with wheaty little pieces that don't taste like much of anything, and generally flavored marbits. Their big claim to fame are the shapes, with the various brightly colors objects in the bowl being enough to attract the magpie-like eyes of children. But all the marshmallows taste the same, and combined with the rest of the cereal and milk it's just... sweet cereal. There's not inherently bad about Lucky Charms, but it's also not really appealing to me. I expect more. 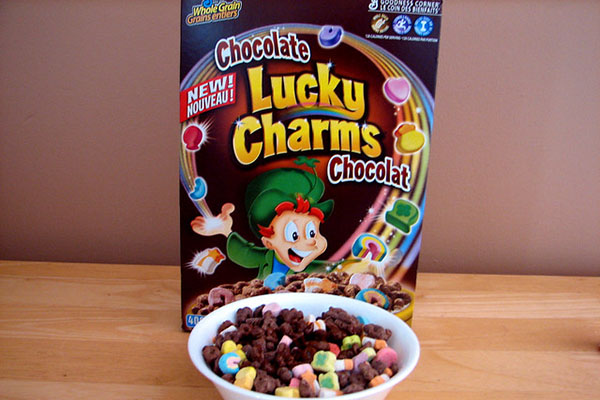 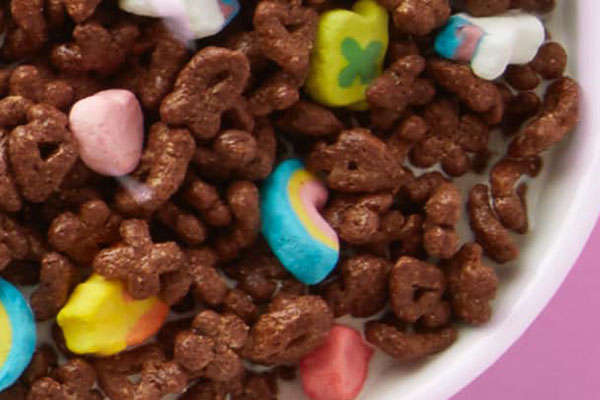 That was really my issue with Chocolate Lucky Charms: I expected more. It's chocolate, which does have a leg up over generic Lucky Charms, sure, but it wasn't exactly great. If I want a chocolate cereal there are others out there that appeal (Cocoa Pebbles, in any variety, for example). Hell, if I want chocolate cereal with marbits I just have to wait for Halloween to roll around and buy my once-yearly box of Count Chocula (the vampire will always have my heart). The wheaty bits in Lucky Charms aren't as good as what comes in the box from my favorite Count, and the rest of it is just... fine.

I guess if you really are craving the kind of favors you can get from Count Chocula and can dupe yourself into thinking Chocolate Lucky Charms are good enough then, sure, get this. But there are better cereals out there. Don't settle.

This cereal I absolutely got because it sounded like it would be wretched (I love writing about bad things because I always have more to say). Coffee plus cereal plus marshmallows sounds absolutely abysmal... and yet this was actually good. Like, really good. So good I've repeatedly bought boxes of it and will go out of my way to keep an eye out for it whenever I run low. I didn't think a cereal could be this munchable, and yet this is the kind of snack I actually find myself craving, which I feels stupid saying about cereal.

The Dunkin cereals actually come in two flavors: Mocha Latte and Caramel Macchiato. The caramel flavor didn't do it for me as it was just too sweet and lost a bit of that delicious coffee flavor. Its that flavor specifically that makes the cereal so good: there's the sweetness of the sugary cereal and marbits paired with that dark roasted coffee tone and it actually mellows out the flavor. It works really well in the Mocha Latte, which isn't as sweet, but in the Caramel Macchiato its just a bit too much and loses the appeal (which is surprising as usually I'll take caramel over chocolate any day of the week).

The basics of the cereal are a puff plus marbit combo, with the puffs having the chocolate flavor. Interestingly, it's the marbits that have the coffee infused flavor in them. I didn't actually expect that as, usually, marshmallows aren't flavors (having that general "marshmallow" flavor that's really just refined sugar taste). I actually can't think of a cereal that has flavors in the marbits, which admittedly might just be because I've never bought one before. Still, it was a surprise, and a pretty good one at that. 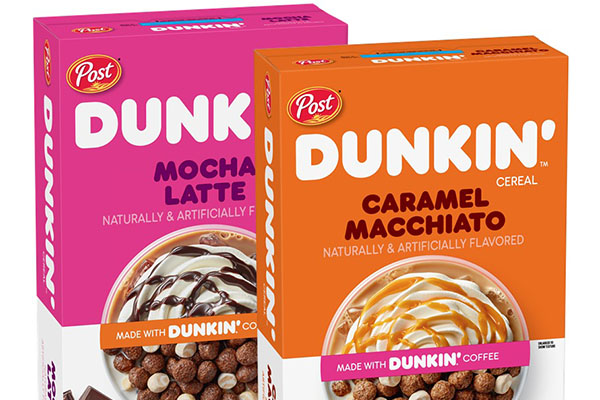 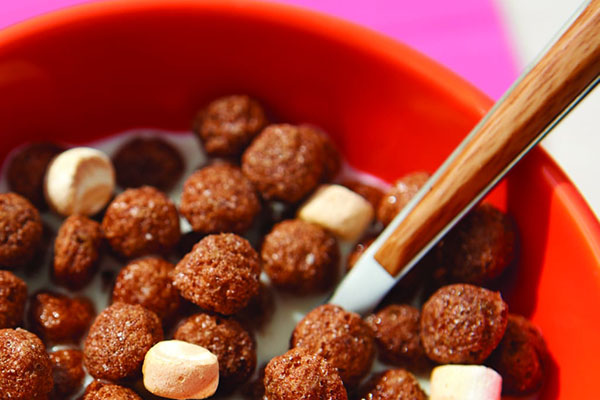 When it comes to eating this cereal, I find I much prefer it in milk than dry. That, too, is surprising as I'm a dry-snacking kind of guy. Chocolate Chex, for instance, I think taste much better dry than in a wet bowl of milk. This one, though, has body to it, and the puffs take on a nice texture when wetted. The marshmallows, too, are better once they soak for a few seconds, so overall this is very much an "eat with milk" cereal, and one o the few of those I truly like.

Overall this cereal rocks. I doesn't replace other items in my pantry when I wanna eat a handful of cereal dry, but it is my go to when I want a small meal of corn bits and mallows. Dunkin has a really good one here, just stick to the Mocha Latte.

Now this one... this one just seems like it should be an abomination. Brightly colored, with Easter colored o's and marbits, this is the kind of the cereal where you're sitting there thinking: why? What could Peeps, the brand, possibly add to a bowl of wheaty bits and marshmallows. All they make are marshmallows, and their most famous variety, the standard chicks and bunns, are marshmallow flavored (and coated in sugar). Even their specialty flavors hardly taste like much of anything (the raspberry and white chocolate one they had out this year had hardly any berry flavor to it at all). What would a Peeps cereal taste like besides pure sugar, if it's going to be accurate?

Well, the answer is, oddly: birthday cake. When you open up the box and take a whiff, you are immediately hit by the smell of birthday cake. I suppose that makes sense as what is a birthday cake by frosting (sugar) and cake (wheaty mix). If you make that into a cereal you'd have wheaty bits and marbits, and that's this right here. The cereal does come in the traditions Peeps colors (read: Easter), and it has little marbits in the shapes of chicks and bunns, so it is accurate to the brand. I can't say it tastes especially "Peep-like", but I also don't think that's a bad thing.

With this cereal, I although I will eat it both in milk (as the o's are substantially enough to hold up to milk) as well as dry, I find I prefer this one as a dry snack. The flavors work better when you can load them right into your mouth and just munch. If you put it in milk the flavor dilutes some; it's still tasty, but maybe not as. Honestly, the cereal reminds me of Cheerios if you put some marbits in there and made it brightly colors. It's really not special in any way, it just kind of its. 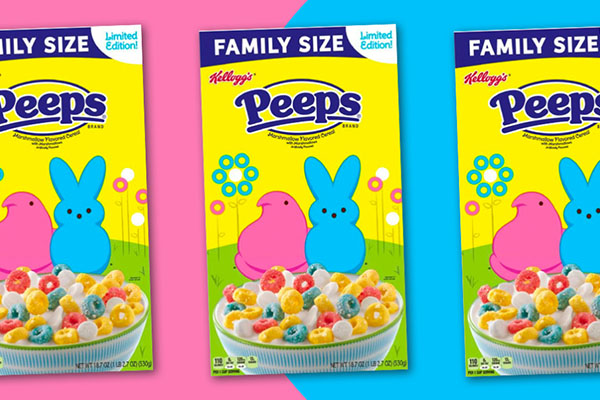 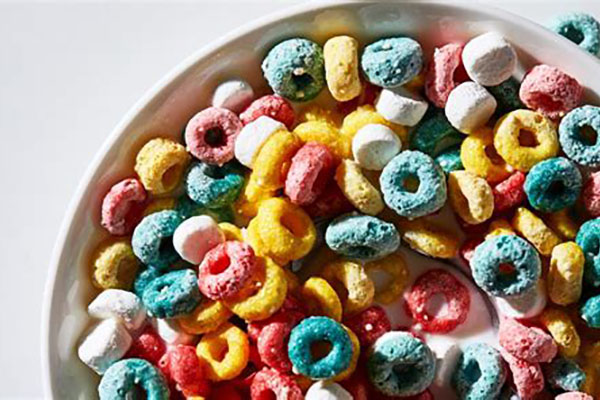 That said, I do think the o's here actually taste better than Cheerios. If you're going for heart-healthy eating, I'm sure the Peeps brand cereal isn't as good for you as old, reliable Cheerios., but we're talking junk food here and Peeps has the edge. It's bad for you, I'm sure, but in the generic way all sugared cereal is bad for you, and if you've made it this far into this article that kind of clause isn't going to stop you at all. We're here to eat sugar, rot our teeth, and share the stories about it. Peeps Cereal is perfect for that.

Just bear in mind that this is a limited edition cereal. If I had to guess, it'll be an Easter tradition (if it sells past this year), so you'll either have to grab discount boxes while you can now or wait for the next season to grab this garish cereal. It's pretty good, so I would recommend. And then, while you're waiting for it to come around again, go get some Dunkin Mocha Latte. So good.