Can We Crown a New King?

Every restaurant has to have a spicy chicken sandwich these days. We're up to three articles all about spicy chicken (Part 1, Part 2) and it doesn't seem like things are going to slow down any time soon. People want their chicken and they want it hot (a sentiment I can agree with as a good spicy chicken sandwich is really good). And as long as these sandwiches come out we will continue to review them (even if our arteries, and our intestines, howl with anger).

As in previous reviews we are looking for a sandwich that will take out our current reigning champion: the Popeye's Spicy Chicken. It may never be possible, but we continue to search (and eat) to find out. We'll just be reviewing the chicken themselves so other items on offer, from fries to shakes, will not be part of our review.

One would think that with Church's past history they would be able to produce a really solid spicy chicken. Not only are they one of the larger chicken chains around (larger even than champion Popeye's by a wide margin) but they also used to be part of the same conglomerate as Popeye's. Both stores used to pull from the same supply chain and, you would assume, would have shared ideas and recipes back and forth. Why have two chicken joints if you weren't going to work to improve them both equally (like Rally's and Checker's or Hardee's and Carl's Jr.).

While that might make sense, I have to say that the Church's Spicy Chicken Sandwich I sampled is probably the worst sandwich I've reviewed for these articles yet. This sandwich was far beneath sad offerings from McDonald's and Burger King, and those places aren't dedicated chicken joints. I don't know what was wrong with Church's chicken (although I haven't ever heard good things before), but this certain cements itself as the low bar from which all other sandwiches at least have to rise above to consider themselves "edible".

Getting the sandwich everything seems like it should be okay. The sandwich comes wrapped in the same kind of baggie as the Popeye's sandwich, a container meant to keep the sandwich warm and crispy even if you have to transport it home. I didn't have to take it far (there's a Church's only a couple of blocks from my house) and yet even in that short distance (or, I have to assume, long before it even went into the baggie) the sandwich was flaccid, soft, and gross. It had lost that crispy consistency needed for good fried chicken (if it even had it at all), and felt like a sad, tired mess in my mouth.

Worse, the thing wasn't spicy. Oh, it was coated in seasoning to make it look spicy, but this was as bland as they come. The breading was unsatisfactory on all fronts, including flavor, while the spicy mayo applied to the sandwich was sad. It had a slightly vinegar flavor, a hint of sweetness, and that was it. The sandwich, frankly, would have been better with mayo squeezed out of a tube than what Church's put on there.

All around this was the worse experience I've had with a spicy chicken in some time. We've hit rock bottom and it's name is Church's Chicken. 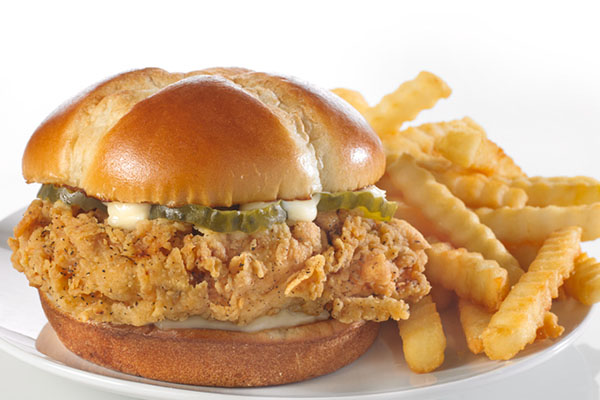 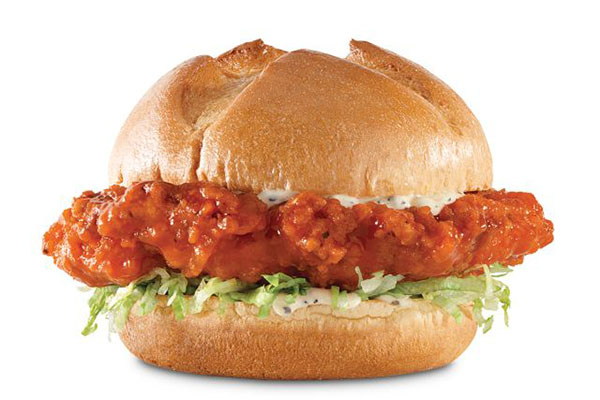 We could go round and round about how far outside the standard "spicy chicken" we should go and still consider it part of th same genre. There are purists that would rebuke having buffalo chicken be part of the same food grouping as a non sauced spicy chicken, but for me it comes down to two factors: 1) is it spicy and 2) is it fried. The Arby's Buffalo Chicken Sandwich meets both criteria as its a fried chicken sandwich and it's covered in spicy sauce, so I give this a pass.

As far as buffalo sandwiches go, this thing is pretty good. I don't normally think of Arby's when I consider good fast food joints -- their stuff can be pretty hit or miss, and even their good stuff, like the Beef 'n Cheddar, can vary wildly based on who makes the sandwich on any given day. I've had some absolutely fantastic buffalo sandwiches from Arby's but I've also had a few pretty bad ones, so the variance in quality is a factor when getting this sandwich. Again, though, when it's good its really good.

Properly made, the Arby's sandwich doesn't have too much breading, just enough to let you know it's got a crispy coating. They pour on the sauce, a kind of "red hot" buffalo sauce that gives it the proper heat. Get it fresh and you can eat it while its crispy even after a short drive him. Problem here is that variance in quality and whether the sandwich is fresh out of the fryer Sometimes it can have too much coating, sometimes they don't put enough sauce on it, sometimes its too soggy by the time it reaches the mouth. Anything an throw this bird off.

The high level of variance keeps this from being a solid recommendation because you never know when you're going to get a poorly made sandwich. Usually its great, but sometimes, though, its not. Your best bet: go to Arby's for something else and then get the slider version of this sandwich on the side. At least that way, if its a disappointment you don't have to eat a lot of it.

Now this sandwich falls way outside what qualifies as a "spicy chicken" but I just had to vent about this: Subway changed their chicken. For years (decades maybe), Subway had their "roasted chicken breast". It was an obviously formed and pattied chicken chunk, unbreaded and then likely steamed, but despite this it actually was pretty good. It had a good consistency to it, uniform and tasty, and while I'm sure not everyone loved it, that's why Subway also had turkey breast sliced and ready to go. Get poultry whatever way you want.

Recently though (within the last six months), the chain got rid of the roasted chicken. They'd been gearing up on this for years, likely, having slowly introduced their cubed up chicken chunks as an alternative. At some point they dropped the roasted chicken, made the cubed chicken the default, and now you can't get the other kind. Thing is, the cubed chicken doesn't taste as good. It's saltier, and it lacks the uniform consistency that made the other chicken a winner. Now, most of the time, I end up with a bit of gristle or fat in my mouth which I don't want when I'm chewing on a sub.

Of course, the easiest answer to why they did this is because they can charge more: their cubed chicken chunks sell for two bucks more on a footlong. To "make up" for this the restaurant piles the chicken on high, adding even more meat to the sub. So now it's more chicken I don't like, which not only tastes bad but also throws off the topping mix on the sub because there's so much meat now. It's just gross. Needless to say a stand-by sandwich I'd always get -- the roasted chicken with all the veggies, buffalo sauce, and southwest sauce -- is gone, and I'm not getting the Subway chicken again. 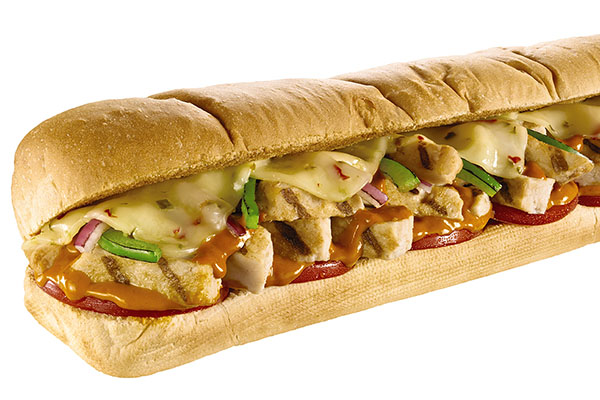 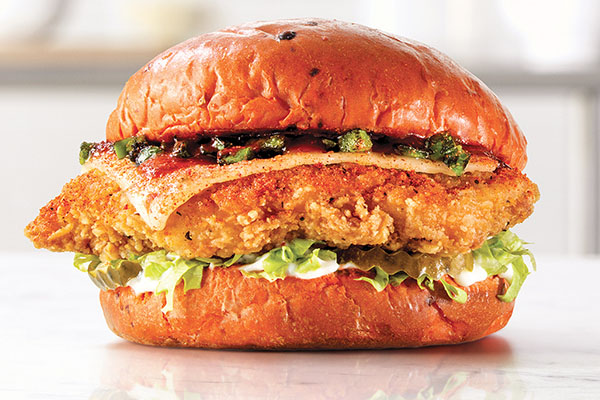 Finally we have a recently released sandwich put out specifically to go for the crown that Popeye's has worn for easily two years now: the Arby's Diablo Dare. Yes, two Arby's sandwiches in the same article, but these are very different sandwiches The Diablo Dare (which sounds a lot like KFC's Double Dare, another weird chicken deal) is Arby's biggest, spiciest chicken so far and, well, it's not bad.

At first blush this seems like a true contender for the throne. The Diablo Dare is a fried chicken (or, if you prefer, brisket) sandwich, coated with cayenne, habanero, and capsicum powder, covered in pepper jack cheese featuring habanero, jalapeño, and ghost peppers, slathered in Diablo BBQ sauce containing habanero, cayenne, chile, and chipotle pepper, topped with fire-roasted jalapenos, and encased in a Diablo Bun baked up with with chipotle pepper flakes. It is absolutely coated in hot peppers. Opening the baggie the sandwich looks like it's going to be a real heat seeker for the spicy chicken set.

The first couple of bits, too, are pretty solid. There's a nice mix of flavors here, from the sweetness of the BBQ, the salt of the fried chicken, and the crunch of the peppers. For a few bites it's really good, although I don't know if I'd argue it's as spicy as the ingredients would imply. It has some kick, yes, and enough heat to make me feel warm on my tongue. But then the Popeye's spicy chicken can do the same thing without all the added ingredients to it.

Honestly, I think that's where this sandwich falls down: it has a lot going on with it, much of which distracts from the chicken itself. When you bite into a Popeye's sandwich you taste the chicken. It's front and center in a very big chunk of chicken breast. With the Arby's sandwich I taste the sauce, and the peppers, and the cheese but the thing that feels superfluous to it all is the chicken patty. It's there, but ignored. Over time I found I was less and less enthused with the sandwich as I ate my way through it, eventually setting it down not from the heat but from the boredom. I did finish the sandwich, but it was just because it was there.

Arby's is making a big deal about how spicy this bird. They're doing a whole social campaign, "take the Diablo Dare", and thy even pack in a small vanilla shake with the sandwich so you can cool down as you eat it. In my experience the shake isn't needed as its not that hot a sandwich. It's fine, but nothing really special once you get into it, and all the hype and buzz for it is overrated.

Now I will say that the same level of Arby's variance could be at play here. Maybe I got one of the lesser birds and the people just didn't prepare it right. However, if you can't get a consistently good sandwich then its just not worth going. Even when a Popeye's sandwich isn't as spicy as I'd like it's still a good chicken sandie because Popeye's makes it right. With Arby's, if you get a bad bird then its just bland and not enjoyable. For my money, even though this comes closer to the crown than most, not even this extravagantly topped bird can beat Popeye's at their own game. If you want to take the Diablo Dare once, go for it, but I bet you end up back at Popeye's where the Spicy Chicken is done right.