It's Taco Tuesday, or Thursday, or Something

So I think most of us have worked off of one of those pre-made Mexican meal kits before. "Buy this box and you get all the basics items you need for a Mexican meal, from the seasoning to the sauce to the crispy tacos. Just cook and serve." Those things are easy, but they are pretty basic, too. And, frankly, they aren't really necessary once you get a feel for what goes into Mexican (or, because I'm American, Mexican-style) fare.

Someone passed me a thing a long while back that said, "to make your own taco seasoning just combine salt, cumin, chili powder, and paprika in such and such amounts," and it did work well. Thing I realized, though, was that if I knew the basics of what went into the seasoning I could make up whatever version of said seasoning when I made the dish. And then I started getting inventive and mixing things as I liked them... and then my dishes really got fun.

The thing I like about Mexican cooking (well, again, Tex-Mexi-murican fare) is that you can really go the "Taco Bell Route" with it (i.e., take this ingredient and add it to that form of serving and suddenly you have a new "item"). Just take whatever you're making and mix and match filling with shells and toppings and whatever and it always turns out good. I say that because despite the fact that we'll be making things like "taco" and "fajitas" today, I very rarely actually serve them "as intended".

Tacos are easy and generally go over really well. As I noted, there are plenty of ways you can serve this, and in fact the taco meat barely has to go in a proper "taco" at all. Hard shells and soft shells are fine, of course, but you can also get big tortillas and make these into burritos, or put it in a bowl with chips as a "walking taco", or do as you like. Tacos are simple and can be served any number of ways.

For those looking for a vegetarian option, I have been known to take a brick of extra firm tofu and dice it up into tiny pieces and then sautee that instead of the meat. It takes a bit of time for the tofu to start to brown (longer than it takes for meat to cook, certainly) but once you get it browning the tofu takes on a really nice, firm texture and acts as a great substitute for meat. 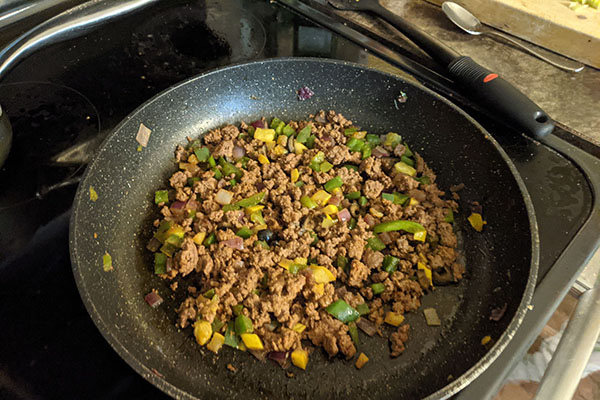 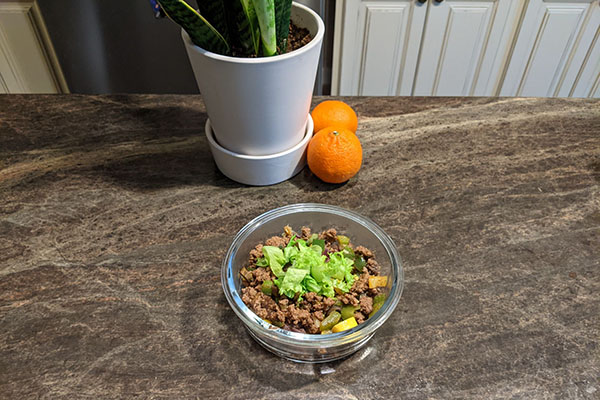 Like with tacos, fajitas can be served just about any way you want. I've done them in the usual soft tortillas of course, but I've also served "fajita tacos" in a hard shell. Fajita salads are, naturally a thing you can do as well (which is basically just a "walking fajita" if you serve it with chips). Hell, plenty of Mexican restaurants serve "fajita burritos" and "fajita nachos". What matters is the preparation of the meat and veggie mix that makes it "fajita", apparently.

Note that when I say "proper fajitas" above I'm referring to the fact that, strictly speaking, a "fajita" actually refers to the meat: a strips steak (carne asada) sliced against the grain into strips before sauteeing. Naturally, us dumb Americans have decided that anything cut into strips and served in tortillas is a "fajita", and I like to make fajitas not only with steak but chicken, fish, and tofu so I'm only perpetuating the misuse of the term, haha.

If you are looking for a vegetarian option here, there are a couple I can recommend. Veggies are, of course, a required part of fajitas in my opinion, so you can take the meat out entirely and not substitute anything else and you'd be just fine. But, portabello mushrooms are a great (and very substantial) addition you could make in the place of meat. Tofu is also an option, and I do like slicing a brick of extra firm into strips and browning it before throwing in the veggies (note, again, it will take time to brown your tofu). 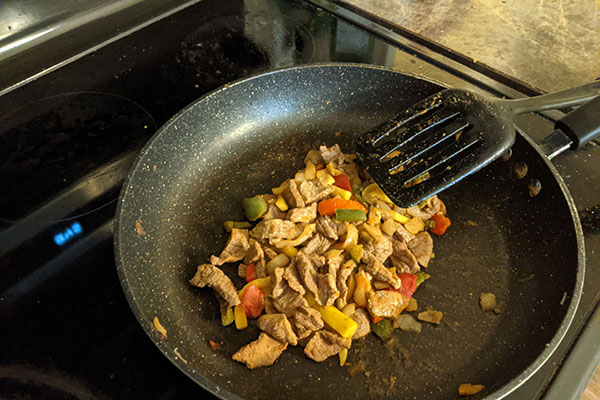 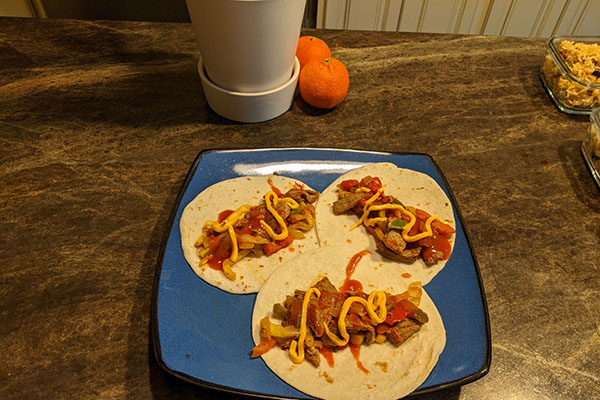 As noted, this is a dish that my sister came up with. Her version was a little more basic -- Lipton packaged chicken rice mix, chicken, garlic, and jalapenos -- but then I took it and ran with it, adding in seasoning, more veggies, and just doing as I saw fit. Serving them as burritos was the "intended" way, but my wife likes to do these in "walking" form with corn chips. And I like to pile on the toppings because they're tasty and I want them.

As with the above dishes, browned tofu, diced "taco-style" this time, can be used as a substitute for meat. Some kind of meat or meat-substitute is recommend just to make this dish feel "substantial". 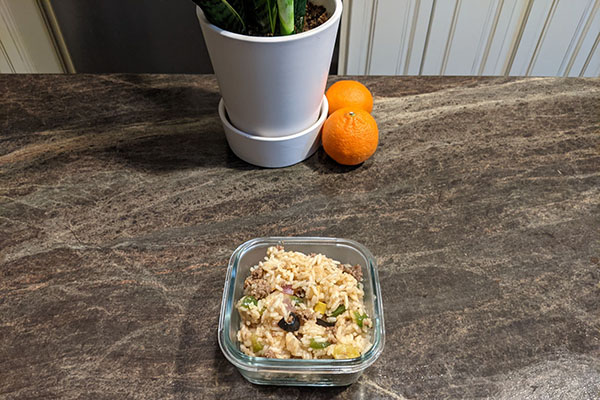 And with that trio of recipes we're done for this week. Next time: stews!