Spice Up My Night

Last year we covered a bunch of spicy chicken sandwiches to see if there was a clear winner. There was: it was Popeye's Spicy Chicken Sandwich, the sandwich that essentially ignited the "Spicy Chicken Wars" that have been raging for a couple of years at fast food restaurants. Every few months it seems a new batch of spicy chickens come out to try and knock the Popeye's sandwich off its throne, but, frankly, it's hard to beat the king at his own game (even Burger King can't do it). This current crop of contenders is no different.

Unlike last time, where I ranked the sandwiches, we're presenting these in no particular order of "decentness". Just know that know of them compare to the Popeye's Spicy Chicken, no matter how many of them might try to compete.

Menu Description: The Colonel's fiery creation was inspired by one of Nashville's most famous dishes. Featuring a perfect blend of spicy cayenne and smoked paprika.

So two points with this item: one, it's not a sandwich, which I recognize, but I really wanted four items on this list; and two, I absolutely forgot these things existed after getting a batch a couple of years ago. They do exist, they're still around, and they're just as forgettable as they were the last time I had them. I guess that should be expected since it's KFC we're talking about, the biggest and yet also least impressive of all the chicken joints around.

The issues with KFC's Nashville Hot Tenders are numerous. The first issue is that they just aren't spicy. I recognize that fast food joints have to find a spice level that most people will enjoy, but when you call it "Nashville Hot" you're setting a minimum bar for hotness that you have to meet. "Buffalo" can be any hotness because you can dilute Buffalo sauce and still call it "Buffalo"; you can't get away with that with "Nashville Hot". There are expectations when you call something "Nashville Hot" and KFC fails to live up to those expectations with their bland and underwhelming sauce.

Beyond that, the chicken and sauce are a greasy mess. I worked at a restaurant way back and I saw that the best (read: cheapest) way to dilute hot sauce w3as to mix it with butter. KFC clearly uses some kind of thinner for their sauce, whether butter or some other kind of grease, because this mess of chicken absolutely drips with thin, greasy sauce. It's really gross and not at all how you expect crispy tenders to come across. I want crunch and spicy from hot tenders, not a soggy, sad mess.

But then it is KFC and their chicken sucks. When you bite into these Nashville Hot Tenders all you really taste is KFC chicken and, frankly, that's not a taste I want. It's too bready, too salty, with bland and stringy chicken. This is low-bar chicken making hot tenders and it shows. This is a hard pass from me, I never want to eat these things again. 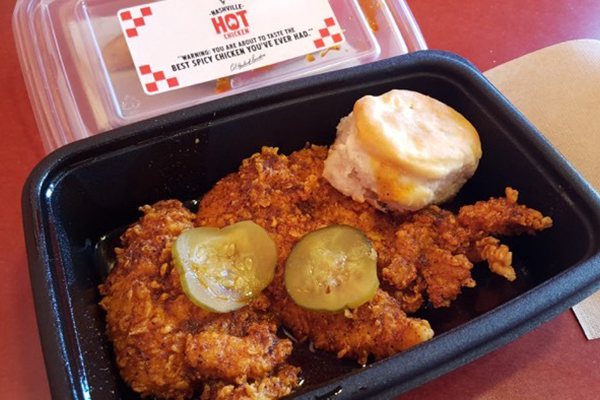 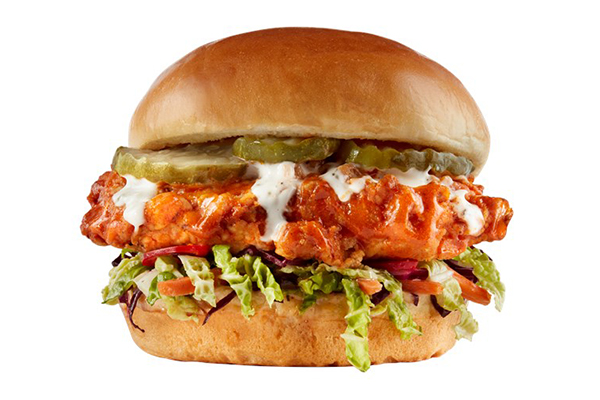 There was a point when Buffalo Wild Wings was a pretty good restaurant (at least for what they made). At some point, though, their food (and their service) fell off and they just haven't been the same ever since. Since then I've tried, a few times, to go back and see if they've somehow managed to turn it around, but they still haven't The Nashville Hot Chicken Sandwich is just another sign of that.

Make no mistake, Buffalo Wild Wings used to have a great spicy chicken: the Caribbean Jerk Chicken Sandwich. It had a chicken breasts tosses in Cajun spices and then grilled and blackened, tossed in their Caribbean Jerk sauce, and then topped with blue cheese dressing, lettuce, tomatoes, and pickles. It was amazing, and hot, and I lament the fact that they knocked it off their menu years ago. Right now they have the Nashville Hot Chicken and it is no substitute for what they used to offer.

Like the KFC sandwich above, the Nashville Hot sandwich from BW3s is a lame mess of a sandwich. It doesn't have any spice, or flavor, despite having both hot sauce and hot pickled peppers on it. I expect, with that combination, that I'll feel some heat; maybe my mouth won't be on fire but you gotta at least get me a little tickle on my tongue from the spice. This, though, was just a vaguely sweet sauce that might have passed by a closed bottle of cayenne pepper on its way to being poured on the sandwich.

The sandwich also sucks, mind you; it's an over-breaded mess that was too crunchy, to the point of being hard, and very dry. It's salty, but not in a good way, with the over all effect of everything involved making this somehow blander than the sum of its parts. This is another disappointing sandwich, made doubly so as even now I remember how good BW3s used to be. It's sad to see them put out a spicy chicken this meh.

Speaking of meh, welcome to the Spicy Ch'King Sandwich from Burger King. We already reviewed their Spicy Chicken, Jr., which actually isn't terrible (at least on the Burger King sliding scale), but this new sandwich is supposed to be their big shot for Spicy Chicken supremacy. It fails, hard.

Burger King has apparently tried the Popeye's sandwich because they try to dress up the Ch'King like the competition. The sandwich comes wrapped in the same type of foil-lined bag that Popeye's uses, ostensibly so the sandwich can be kept crispy (as if it were a Hot Pocket). Opening up, then, you expect it to be crispy and delicious, but at least on the crispy front that's not going to happen because the sandwich is doused in buffalo sauce. You can't have a sandwich that's both sauced and crispy, especially not if it sits for anything more than a few seconds (as all Burger King food does).

Flavor-wise, the sandwich is... okay. The buffalo sauce sits somewhere between expected buffalo and Nashville Hot, vaguely sweet but still at least a little spicy. Unfortunately it has the same issues as the other items we covered on this list: the breading is just all wrong here. It's too thick, too salt, ruining the delicate balance of the spice-to-chicken ratio. This isn't a bad sandwich on its own, but it's dressed up to be more and what you're left with is merely adequate at best. It's not tasty but it's not gross, which sounds exactly like everything else Burger King serves. 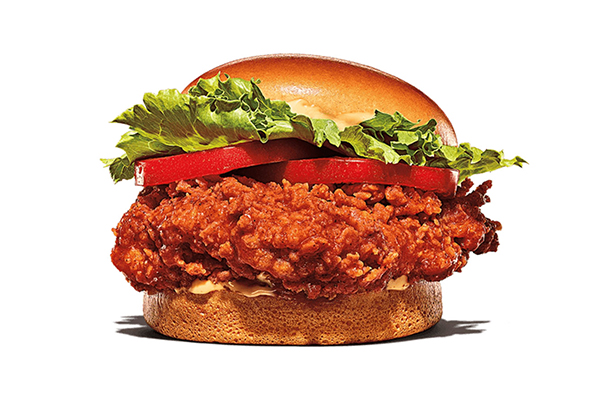 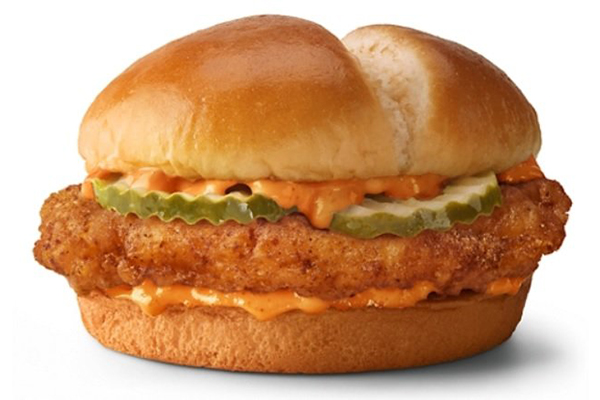 Menu Description: With our new Spicy pepper Sauce topping the new southern style fried chicken fillet on a new toasted potato roll, this sandwich was made for those who like it crispy, juicy, tender and hot.

Finally we get to another copycat for the Popeye's style: McDonald's and their new Spicy Crispy Chicken Sandwich which, for all its talk about "new" ingredients, seems like a bog-standard McDonald's sandwich. It looks, and tastes, like their previous effort, the Spicy McChicken, just larger and a couple of bucks more. But, then, when you go to McDonald's you expect McDonald's-quality of food.

Like with Burger King, Mickey-Ds dresses this sandwich up in a foil wrapper, as if to say, "this is deluxe and will be crispy when you get it home." My sandwich wasn't crispy, even though I started eating it immediately. It also wasn't great, with yet another bland balance of flavors all amounting to not much of anything. It had a bit of tang, just the slightest hint of pepper, but it barely qualified as "Spicy" at all.

It does at least look the part, which is more than I can say for most of these contenders: it does look like a McDonald's sandwich (as in, sad and pathetic) but it has the orangey sauce and pickles as if to say, "you might mistake me for a Popeye's sandwich if it's 3:00 AM and you're drunk, sad, desperate, and alone." That should be the slogan for McDonald's as that's pretty much the only time I can stomach their food.

In short, if you come for the king you better not miss. McDonald's, like everyone else on this list, missed and missed hard. But hey, there's always next year when we can do all this again. Until then, long live the king.