When Mega ManIn 1987, Capcom released Mega Man on the NES, a game featuring a blue robot that fought other robots and took their powers (so that he could then fight other robots with those powers, and on, and on). The series went on to release over 50 games in 30 years and become one of the most famous gaming franchises in the world.'s 10th anniversary came around, we were deep into Capcom's long run of classic Mega Man games (with the occasion marked by Mega Man 8). Which is 25th rolled around, though, Capcom had been silent on the series for four years (since the release of Mega Man and Bass, and that only came out in Japan). It wasn't until his 20th anniversary that we saw further titles (admittedly a year late) with Mega Man 9. And then, after two pretty awesome games, the series went dark. Nothing was announced for the 25th anniversary and fans were understandably upset. Where was thee love for the classic Blue Bomber? 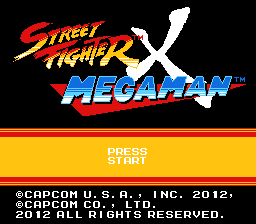 As a bit of a mea culpa Capcom did release near the end of the year a game no one was expecting at all: Street Fighter X Mega Man, a game pairing up two of their franchises for some very silly crossover action. The thing is that this game isn't really an official title, even if it was released officially by Capcom on their website. Technically, SFxMM (as I'll call it from now on so I don't have to type its long title over and over) is a fan game started by a single programmer, Seow Zong Hui, as a bit of a lark, one of those "wouldn't it be funny if Mega Man battled the Street Fighters". Amusing, certainly, and if Capcom had planned anything else for the 25th anniversary likely this game would have remained a little lark that some fans traded around Online. Instead the game became an official, free-to-play release from the mothership.

The thing is, as an official release from Capcom, SFxMM isn't that stellar of a game. It's fun, certainly, but it also has its flaws, many of which are inherent to a number of fan games out there. But if we view the game as a labor of love from a single person, a fan game dedicated to the series they loves, the game shines in a better light. It's all about the perspective you take with it because, really, your mileage with the game is going to depend on just how much you're willing to forgive. (And, so we're clear, this review is based on the v2 release of the game which is an improvement in all respects over the initial release.)

At the start the game does a good job of sucking you into the atmosphere it's trying to craft. The opening animations and menus call to mind the classic Mega Man games, right down to the standard Robot Master select screen that, this time, features eight Street Fighter warriors. Many of them, like Blanka, Chun Li, Dhalsim, and Ryu, are ones you're going to remember from any play through of Street Fighter II, and those SFII references will continue once you get into the final levels of the game as other favorites like Balrog, Vega, and M. Bison (going off the USA names for those characters) await you in the final areas.

The opening menu, though, is where I started questioning all the decisions in the game. While I appreciated many of the characters included, I didn't recognize all of them from the second game. C. Viper, Rose, Urien, and Rolento aren't fighters I'm familiar with (as my knowledge of the series basically ended at Super Street Fighter II). While I'm sure some people were happy to see some of these characters included, part of me really wanted this to be a all SFII celebration. Plus, where are some of he more famous characters, like Ken and Guile? Where's Zangief to give me the ability to crush man's skull like sparrow egg between thigh? And, in the late game, where's Sagat? Rumor is he's a secret boss but shouldn't he be in the main package? 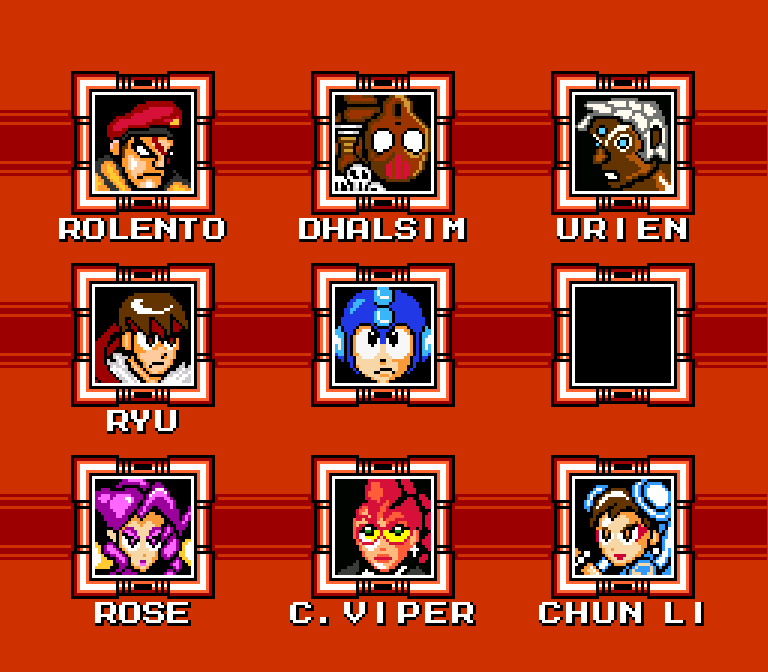 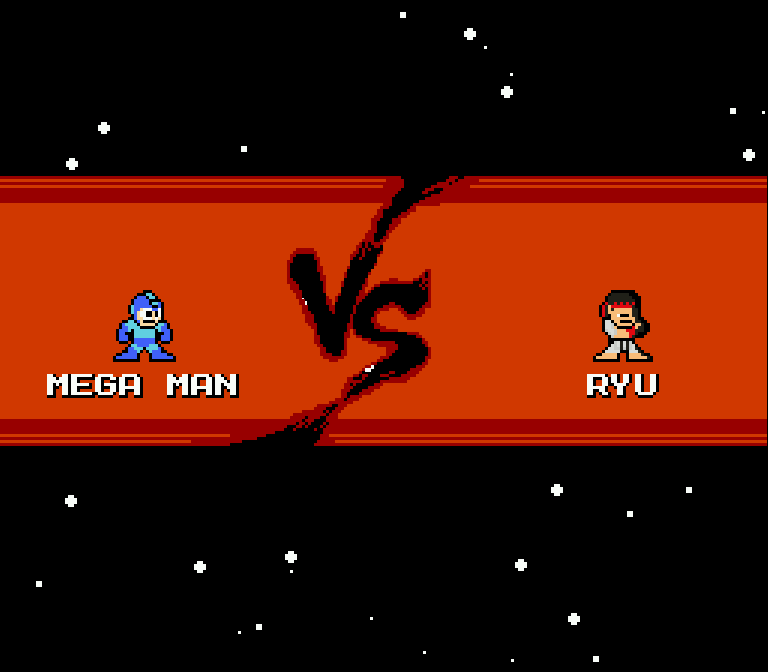 Plus, if we're being hones, the art style of the game isn't exactly top notch. On the menu C. Viper and Dhalsim both look like mangled versions of Charge Man. Inside the levels, many of the background graphics are a bit too plain while the foreground can often be too busy. The design choices are all over the place at times. While some of the stages are fun to look at -- Chun Li's stage is amusing, like a retro NES game you find in a bargain bin -- none of them are really spectacular when it comes to their art design.

And, really, the level are often lacking. Most of theme are obnoxiously difficult, packed with enemy and their weapons, spamming you constantly and destroying tons of health. Remembering, again, that this is a fan game, I can see why this is the case -- most Mega Man fan games lean on difficulty as that's what the players crave -- but I wish Capcom could have reined this in a little when they made it an official release.

This is also true for the bosses. While I like many of the designs the fights themselves are beyond brutal. Most of the bosses constantly charge at you, spamming their attacks over and over again and giving you very little room to breathe. Ryu is the worst offender of this, spinning back and forth with his flying kick which also makes him invincible, leaving you open for attack constantly while Ryu is sitting pretty. It's a shame the bosses are all, without fail, annoying to fight as I loved how many of the were designed. The artist nailed Blanka, for example, while Dhalsim translated perfectly to the 8-bit arena as well. There are little touches that really make the game shine, but, such as the overly difficult bosses, there are confounding decisions that ruin the experience.

For instance, were you craving an auto-scroller (ala Mega Man 8) where you ride on Rush while shooting at enemy spam? Probably not but, for whatever reason, this game includes it. It's the first and last time an auto-scroller appears in the game and while I was thankful I didn't have to suffer through one of these a second time, it was still annoying to have to deal with it at all. Similarly, C. Viper's stage is setup like a Quick Man arena, with a section of death lasers coming after our hero. Problem here is that there are so many enemies in the section you either have to face-tank damage or move too slowly to escape the lasers. There's just no choice in the matter. 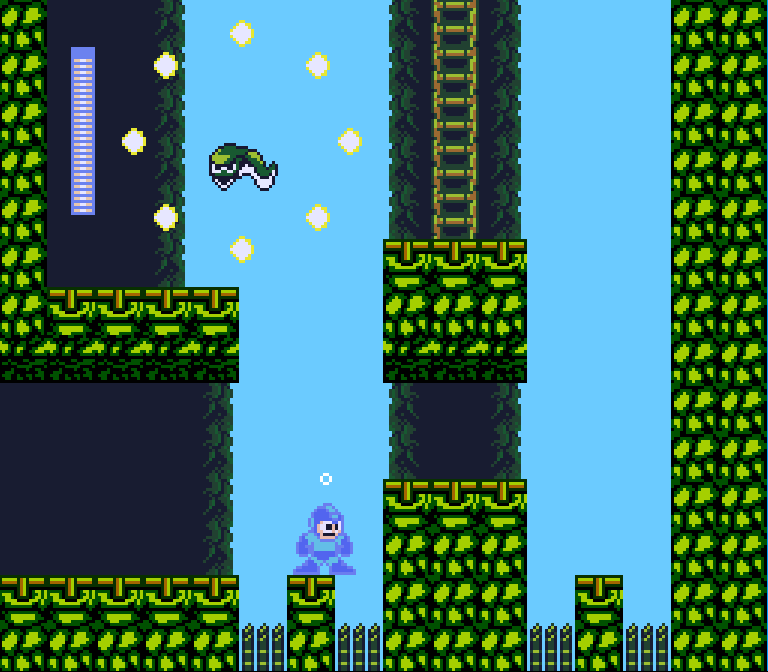 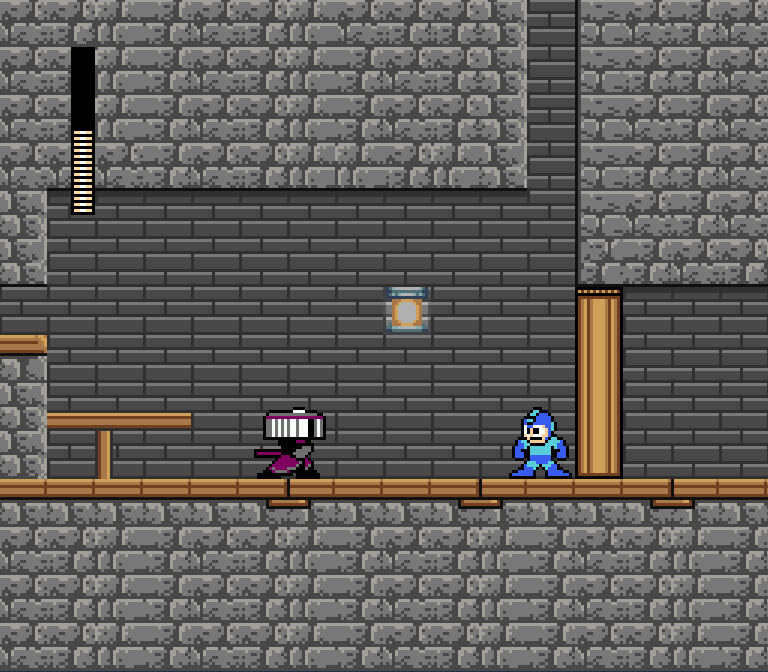 And yet, at the same time the game has moments where it just lets loose and has fun. Nothing shows this better than Balrog's stage, a walking scroller set against the Vegas strip. Balrog sits at the back side of the arena and slowly punches towards you as you flee to the right. Eventually the stage reaches an end point where you're able to jump a gap Balrog can't and he just dies. The stage build him up to be a fight for the ages and then deflates it so quickly. I loved that.

That's one of the best moments and then it's followed by back to back awful ones. Vega is a boss I struggled on, over and over. His weakness is Chun Li's Lightning Kick which, admittedly, does strong damage to him. Problem is that Vega loves flying around the top of the screen, spamming me with airborne attacks while I'm stuck on the ground kicking the air. He killed me so many times because Mega just couldn't kick to save his life. And then, once I got through Vega I was rewarded with a nightmare: the eight refight stage against all those bosses I struggled with before. And, let me tell you, their weaknesses barely do anything. It's awful.

At least the end boss was appropriately evil since he is the final boss. His design is solid and they translated his selection of moves into something that worked for a Mega Man boss. That said, I could have lived without M. Bison's psycho crusher taking out over half my health, especially since he could fire it off across the screen at two different heights, one you had to jump over and one you had to slide under, and there was no telegraphing which one he was doing. Just annoying. Still, after the struggle I went through up to this point, I was able to clear this fight and bask in the glow of never having to play this game again.

That's my big issue with the game. As an official Mega Man release it just doesn't have enough in it to keep me coming back for more. While it features a good mix of ideas, fun sprites and nice remixes of SFII tracks (mashing them up with Blue Bomber originals), it's all put into a frustrating package that actively tries to chase me away. I want to like this game, but I struggle any time I play it. 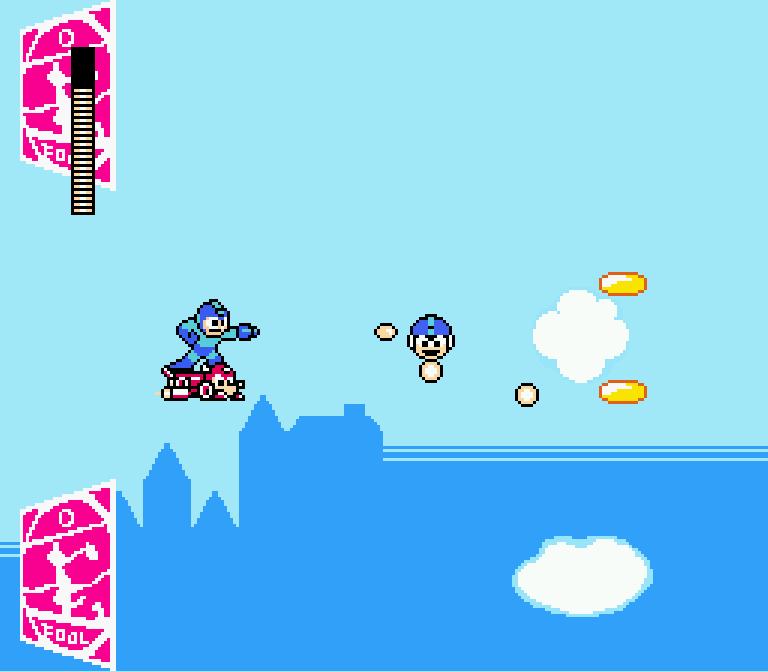 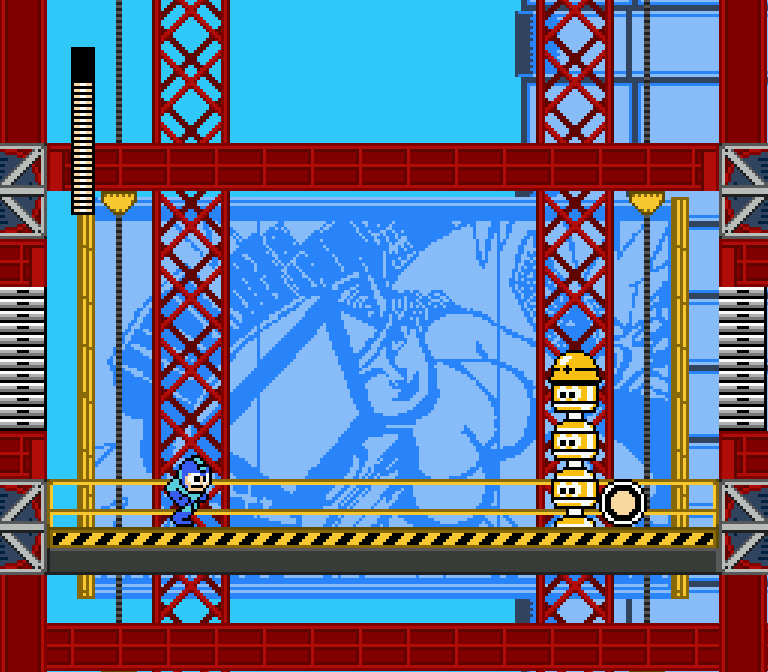 And yet, it is a free game. It's also a fan game. Either of those factors soften my stance on the game. Honestly, I didn't have to pay for it so if I only get a couple of stages in, so be it. And it's a fan game so I automatically know who the audience is: people looking for the next big challenge (i.e., not me). If I were better at the series, or just wanted ultra-challenges, I'd probably be all over this title. "An official Capcom game that gives me the challenge I was looking for? Sign me up!" That's just not me.

So, really, Street Fighter X Mega Man has to be viewed from the perspective of each gamer. It's not a 100% must-play title (except for the fact that it's free so what do you have to lose?) and it's hard to recommend it to anyone but the hardcore fans. For them, though, this game has to be a winner because it gives them everything they want from a new Blue Bomber title. Plus, it's goofy and silly and dumb, qualities I like in a game. There's something to be said for a game that doesn't take itself too seriously.