This Is Where It All Began

After covering the recent release of Mega Man 11, it seemed only fitting to go back to the start of the series and follow it through its evolution. Thus we have the first game in the series to eve star any version of the Blue Bomber, Mega Man. And while the series has gone on to spawn more games that we could possibly hope to count (something like 50 games across all the various main entries and side-series, and counting), going back to the first game in the series in instructive in its own way. Because it sucks. 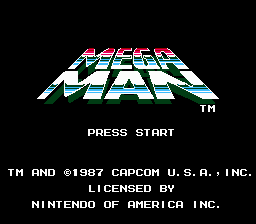 Well, okay, that's a bold statement I don't really mean. It's not that the first game in the series sucks so much as it sucks in comparison to what came after. The best way to look at the first game, the original Mega Man is like a pilot episode. The basic bones of what would grow into the series are all there, but the game is still pretty rough, still trying to figure out what works and what doesn't. It's not unrecognizable when compared to the other main-series entries, but the game does have enough strange little additions that were dropped, or refined, in later editions.

In this first game, there are two brilliant doctors, masters in the field of robotics: Dr. Light (or Dr. Right if you're in Japan) and Dr. Wily. Together the two geniuses have helped to usher in an age of robots. These helpful machines have spread out across the globe, taking over tasks and aiding humanity to live richer, better lives. But then six of the robots go evil, taking over their chosen locales and chasing off all the humans, and it's all because of Dr. Wily. He wants to use the robots to take over the world, an no one seemingly can stand in his way. That is until Dr. Light takes on of his personal helper bots, Rock, and converts the little guy into a powerful warrior. Renamed "Mega Man" (or Rockman, in Japan), our new hero goes out to fight the robots and stop Dr. Wily.

From the start, fans of the series will notice some basic differences. The first, and most obvious, is that there are only six Robot Masters for Mega to fight. Every game in the main series from the sequel on feature eight robots, somehow or another, but the first game only had six. True, later remakes have added two extra robots -- Time Man and Oil Man to the ranks of Ice Man, Cut Man, Elec Man, Fire Man, Guts Man, and Bomb Man -- but this first game features a slightly more svelte experience. This, coupled with a meager four stages in the final castle, makes this one of the shortest Mega Man games in the franchise.

Other differences are more slight. For instance, the game has a score counter, something removed in the first sequel, never to be seen again. Along with this score counter are little score pellet drops to add to Mega's final total. Sure, classic NES games often had score counters, but usually these served to dole out extra lives from time to time. The score counter in Mega Man has no purpose in the actual game play. Plus, those score drops could get in the way of you getting actual drops you needed. Removing the score was a great move for the series. 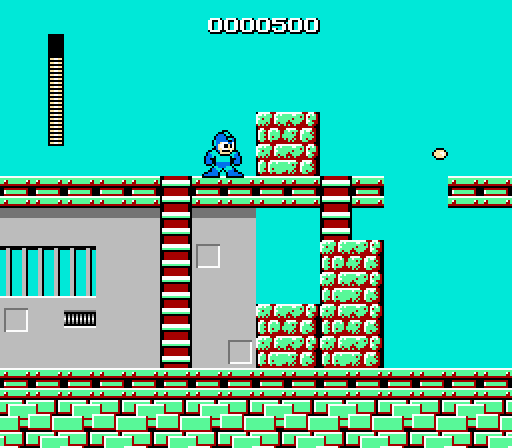 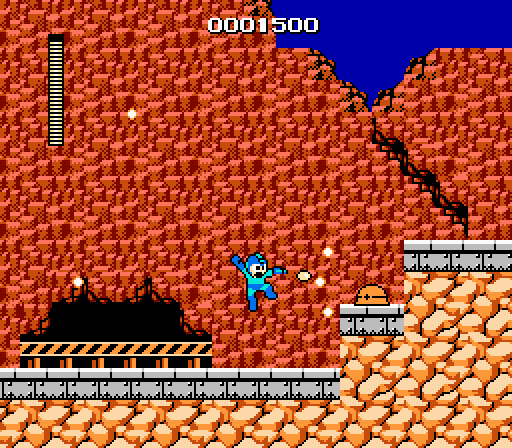 Secondly, the boss corridors have enemies in them. While I think this is certainly interesting, that the game gives you a checkpoint but doesn't let up, I don't think anyone would disagree that it's nice to have a moment to breathe before a big fight, especially if you've just died to them -- you don't want to have to deal with even more enemies lowering your health before fighting through that terrible fight again.

And then there's the difficulty. The game is a little looser, a little less refined than later entries in the series, which is only natural for a first attempt in a new franchise. But there are some jumps in the game that require pin-point accuracy (like one particularly bad leap in Guts Man's stage) and with the looser controls getting moves like that to work can prove troublesome. This, coupled with instant death spikes that will kill you even when you're invincible (due to damage frames) make this one of the toughest games in the series.

I don't want to make it sound like I complaining all about the game, because I'm not. We have to look at this game differently from the others in the series because it was first. While ever game in the series has a tie to this first title, most games really try feel like the next entry, Mega Man 2, the first game to really nail the formula down properly. But, of course, that game wouldn't have come about without the groundwork of this first title.

And there's so much Mega Man gets right. Each of the six starting stages are visually distinct, featuring their own traps and troubles. Just try and get through Fire Man's stage the first time without dying over and over again, and survive Ice Man despite the constant onslaught of flying penguins. And once you get a toehold into the bosses, taking out one, their weapons can prove quite useful in tackling other dangers. This is a Mega Man, of course, so once you defeat a Robot Master you gain their special power. 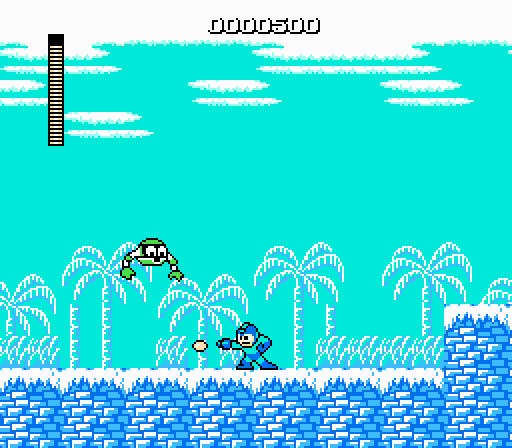 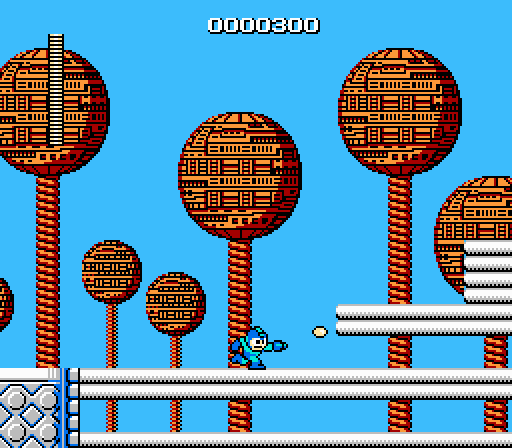 That said, not all the robot powers are useful. While Elec Man's beams and Fire Man's fire blast are both powerful with a lot of utility built in, there are a couple of weak entries. Gut Man's power, to lift big heavy blocks (and then throw them) would be great if you weren't limited to using it only when big blocks were around -- if you could summon blocks, too, it would have so much more utility to it. Bomb Man's bombs are even worse. Sure, you can summon and throw them as wanted, but they have such a long timer on them before they explode that just about any enemy you want to use them on has already moved out of the way (including Guts Man, and these are his weakness).

And if we're being truly honest, not all the stages are as interesting as they could be. Sure, we all remember scaling Elec Man's tower, and Fire Man's stage is a gauntlet of death, to be sure. Gut Man's stage though is a barely-there construction -- it's famous because of the conveyor platforms at the beginning that have claimed many a player's lives. Once you're past that section, though, the rest of it is some basic platforming before the stage just ends.

Still, for a first effort the game is pretty good. Sure, most people are going to point to Mega Man 2 or Mega Man 3 as their faves (I'm partial to Mega Man 5), but this first game set the standard. The template for the games might have changed some over time, but what really mattered started here. It's still a fun game, still nice and playable, and a good title to revisit at least once to see where all the action began.

And then Wily returns in the next title and the action really kicks up a notch... 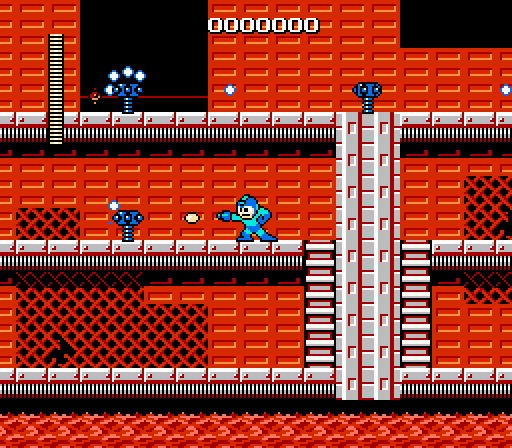 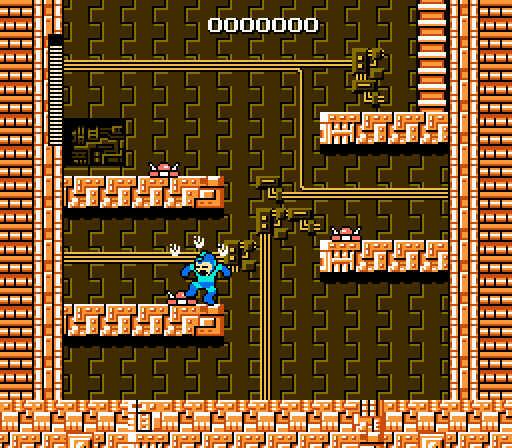