For a while there Capcom really wanted to shove Mega ManIn 1987, Capcom released Mega Man on the NES, a game featuring a blue robot that fought other robots and took their powers (so that he could then fight other robots with those powers, and on, and on). The series went on to release over 50 games in 30 years and become one of the most famous gaming franchises in the world. into every genre they could think of. We've already covered a few of these oddities, from the Monopoly-clone Wily and Light's Mega Board, the atrocious sports title Mega Man Soccer, and the tedious racing game Mega Man: Battle and Chase, but if you thought those were bad you're in for a real doozy here. 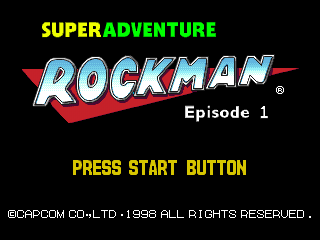 Super Adventure Mega Man (technically it's called Super Adventure Rockman and was released only in Japan with absolutely no U.S. release at all) was an FMV video game. You may recall a spate of these from back in the day as every console maker thought that FMV games would be the next big thing. They were essentially interactive movies where, occasionally, the player would control the hero for some task or another. While some of these games, like Phantasmagoria and Police Quest: SWAT had their fans, many more were reviled for their thin game play that essentially amount to quick time events pasted across movies. Super Adventure Mega Man may not be quite that bad, but it's still not a very good game.

In the game, players are presented with a series of three interlocking episodes, each with about 30 minutes or so of video to them. These are inter-cut with sections of Choose Your Own Adventure-style option menus and first-person shooting sections. These do help to add some variety but don't really extend the life of the game that far. Again, this is rally barely a game and more of single movie with some on-rails sections thrown in.

The adventure starts when Wily heads to South America to explore a recently revealed ancient city. A power source within this city starts sending waves of electromagnetic energy around the world, destabilizing all robots, potentially killing them. Once Wily ends up there, he of course uses the power for his own gain. In the process, though, he discovers a powerful computer, Ra Moon, that helps him rebuild his Robot masters (from Mega Man 2 and Mega Man 3) to defend the island from interlopers. And, of course, the one robot that does show up to try and defeat Wily is Mega Man.

On its face the premise of Super Adventure Mega Man is no more ridiculous than any other adventure we've seen in the series. Wily finding ancient, alien tech has been the subject of two different games in the series (Mega Man V and Mega Man 8), so him using an ancient civilization to create his army of robots makes perfect sense within the context of the world. That said, the actual story as it plays it is pretty bad. It all amounts to Mega Man exploring a section of island, some enemies appear, he finds a way to either avoid them or fight them, and then a Robot Master appears, and Mega has to fight that. Over and over again until all three episodes are done. 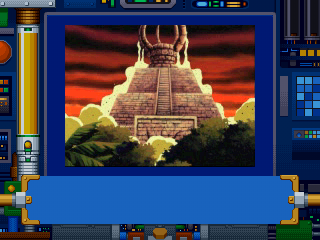 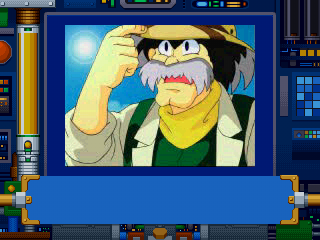 The thing about Mega Man is that he really doesn't need expansive, detailed stories to carry his games. Most of his games amount to little more than an opening cut scene saying "Wily is back to his old tricks again, gee golly" and then Mega dives in to fight robots, steal their powers, and win the day. Arguably Mega Man 8 was held back some by its detailed story (told in really awful anime), and here we are again with another anime game doing more work on its plot than Mega Man really needs.

Now, I do have to admit that I know nothing about the Japanese language; I can't understand it in either its written or spoken forms, and this entire game is in Japanese. To understand anything that was going on I had to find a subtitled version of the game's videos Online. That said, understanding the game didn't make its story any better; honestly it kind of made it worse because then I had to actually see all the terrible dialogue. When I was just playing through it on my own, not bothering to understand any of it, I got to make up my own dialogue and it was much funnier (and better) all around.

Why listen to real dialogue when you can have masterpieces like that?

Of course, not knowing the language also hampered my play through the game when it came time to make decisions. At various points in the film the game would stop cold and present a lit of options for you to make, like "go left" or "go right" or "hide behind those rocks and perform auto-erotic asphyxiation". One route would usually lead to safety while the other would be dangerous. And here I was, blindly pressing options to get through the game. While that might have sucked the first time I played it, long-term it didn't really matter as I could just memorize what I had to do and speed through the game from there. That's great for me doing this review, but it doesn't say much for the replayability of the game. 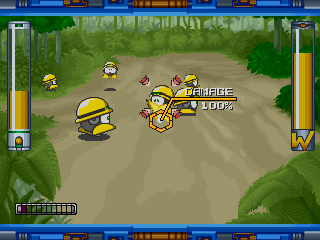 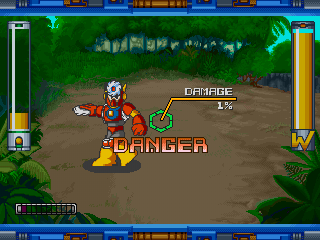 About the only time the game really deviated from its on-rails course was when it came time for Mega Man to go into action. You'd always know this was coming because Mega's arm would turn purple and transform, or he'd do a cool jump into the air and spin around with his arm cannon aimed at the screen. Then the game would cut to black and just sit there for a long while, slowly loading the action sequence. And these sequences are pretty lackluster; they're basically one-screen, on-rails, first-person shooting sections where enemies move around the screen and the play has to shoot the bad guys (and their projectiles) before they take too much damage. And you'll see these screens (and their stupid load time) a lot as this is the only type of action in the game for both enemies and bosses.

These sections probably wouldn't be so bad if they were creatively put together, but every screen basically amounts to the same kind of shooting, over and over, until you finish the game. Even the bosses aren't all that hard as you only have to track one enemy in these sections and it's pretty easy to just spam the fire button and hit the boss and all their projectiles without even trying. And, again, you get to do this a lot, so you better gets used to it if you plan to play this game.

FMV games weren't really a great concept when they first appeared, but in the case of some ideas -- horror movies with interactive elements -- the FMV genre could sometimes crank out decent stories. Mega Man, though, doesn't need a complex story to justify his need to shoot robots -- I know he has an anime series but, really, what's the point? A simple on-rails arcade shooter (a la Terminator 2 or Time Crisis) would have worked better than this mangled mess. Plus, it would have had the benefit of being straight action, like a good Mega Man game should be. Even if you have a chance to play this game, just don't. Super Adventure Mega Man is not worth your time.