The first Game Boy game in the series, Mega Man: Dr. Wily's Revenge, was a surprisingly solid entry despite the small screen. Sure, the adventure was short, and a touch compromised all things considered, but for a first attempt at translating the NES series down to the hand-held form-factor, Dr. Wily's Revenge was a pretty solid title. Certainly it did well enough to warrant a sequel, which is where Mega Man II (Roan Numerals, not Latin) comes in. 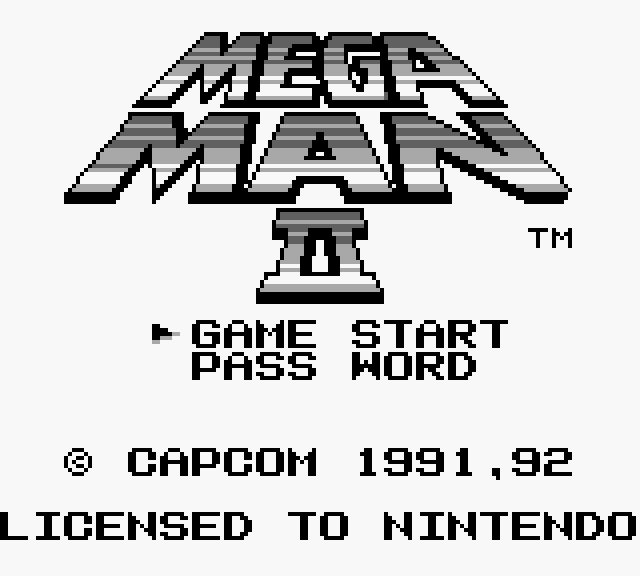 Despite debuting after Mega Man 4, this second Game Boy adventure hews close to the style of the first game, picking a selection of Mega Man 2 and Mega Man 3 villains for the Blue Bomber (well, Black & White Bomber) to battle. Of course, the bosses from Mega Man 2 are the ones that didn't show up in the first Game Boy adventure, but when that set includes Metal Man, who else do you really need? Sure, Air Man and Wood Man are still strange guys and not my favorites of the Robot Masters, but the game at least does a good job of translating them to the small screen. The first half of the game is quite enjoyable to play, blasting through enemies with your Metal Blades, and everything feels faithful to the original NES adventure with just enough added and remixed.

The second half of the game is were things get more interesting. As in the first Game Boy title, once Mega enters Wily's Castle, the hero has to fight four more Robot Masters. In this game, though, Mega won't just battle the evil robots, but he'll also have to fight through their stages first. These four stages take the place of not only the traditional levels of Wily's fortress but also the capsule re-fight stage as well.

On one hand, I appreciate that all the Robot Masters get full stages. This answers one of my big complaints from the first game since now Mega not only earns new Robot Master weapons in Wily's fortress but he gets a good chance to use them as he continues to battle through more stages; if you're going to get more weapons, you should have a chance to really enjoy them, a lesson the developers thankfully learned.

That said, because the second set of Robot Masters (all taken from Mega Man 3) appear in Wily's Castle, the player won't get the benefit of weapon ammo refills between stages. That means players will have to conserve some ammo, and hope for plenty of refills, in the later stages. While it did feel like refills were plentiful enough, the difficulty of this ammo balancing and using your weapons more conservatively could be too much for some players. 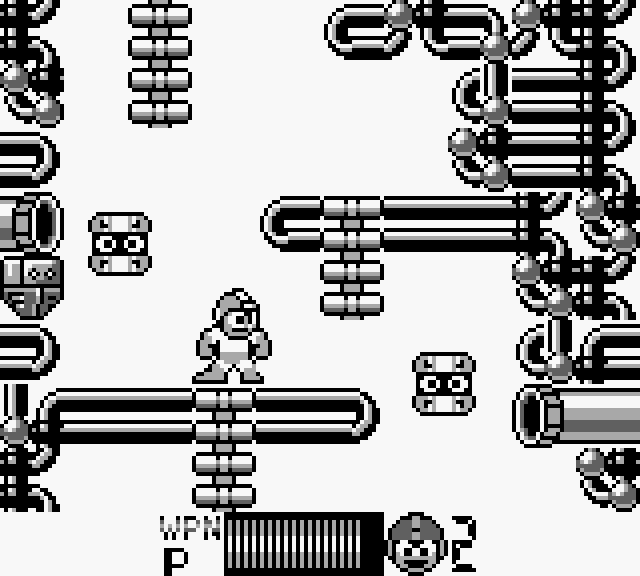 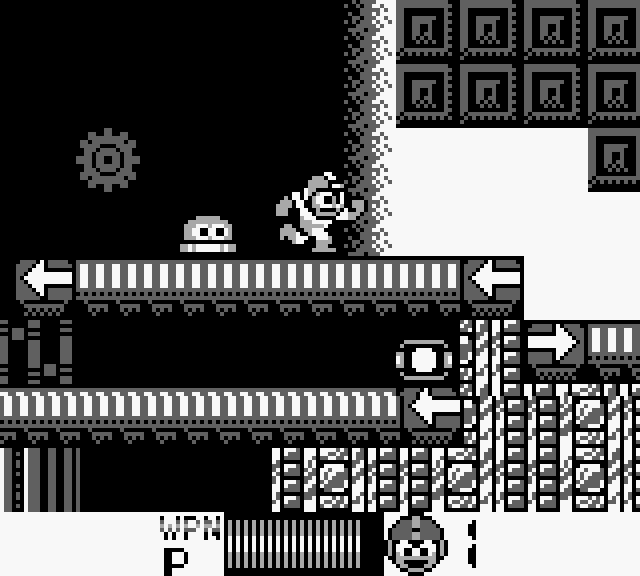 I will note that dividing the Robot Masters up into two sets of four is an interesting design choice. I get that the Game Boy had a small screen so for the sake of the opening stage select four Robot Masters was easier to fit instead of all eight. It does change up the formula in interesting ways, though, to the point that some later games (Mega Man 7 and Mega Man 8 as well as, to a lesser extent, Mega Man and Bass) went with this design choice as well. I can't say if I like it more or less than just giving us all eight to choose from up front, but the whole formula for the series is so rigid most of the time I can appreciate the little things designers do to mix it up.

I'm curious about the choices made for the Robot Masters. I get that the developers used all the leftover Mega Man 2 bosses and that's fine, but the Mega Man 3 choices are curious. The third game in the series didn't have a single weakness order, but two sets of weaknesses with a couple of soft weaknesses to join them. Magnet to Hard to Top in this game makes sense as that's part of the original weakness order, but Needle wasn't weak to any of those weapons originally. Using Shadow Man or Spark Man would have made more sense, a more seamless fit. Admittedly perhaps that's me being too picky, but it did stand out as something a little odd to me since it changes the continuity of the weapons slightly between games.

That said, the worst offender on the strange and useless weapon circuit is definitely the Sakugarne, a new addition for this game. Effectively a pogo-stick, it's like a ridable weapon that does damage with it's point. It's also really stupid and pretty unwieldy, so of course it's the end boss's weakness. I hate this weapon so much and just don't understand why it was even included in this game. Like, seriously, who thought this weapon was a good idea, really?

But then, the whole game does kind of fall apart by the last section of the adventure. The final stage of the game is the last Dr. Wily fortress, and it's a long, boring slog. Sure, at least the stage is long (as we've seen plenty of short Dr. Wily stages in this series), but it's just not enjoyable. Most of the challenges in the stage are seen in prior sections of the game, but instead of coming up with anything new, or ingenious reinventions of the traps and enemies, the game just adds in more and puts in longer stretches of them. The last stage quickly grows tedious and before long you just hope it'll all be over so you can enjoy the end credits. 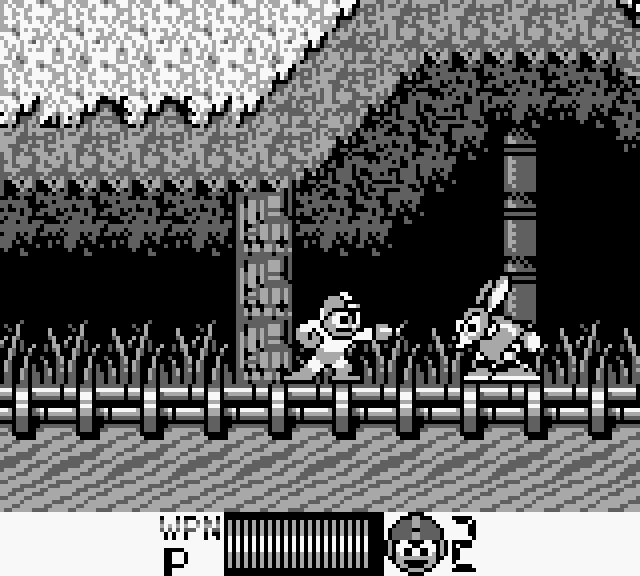 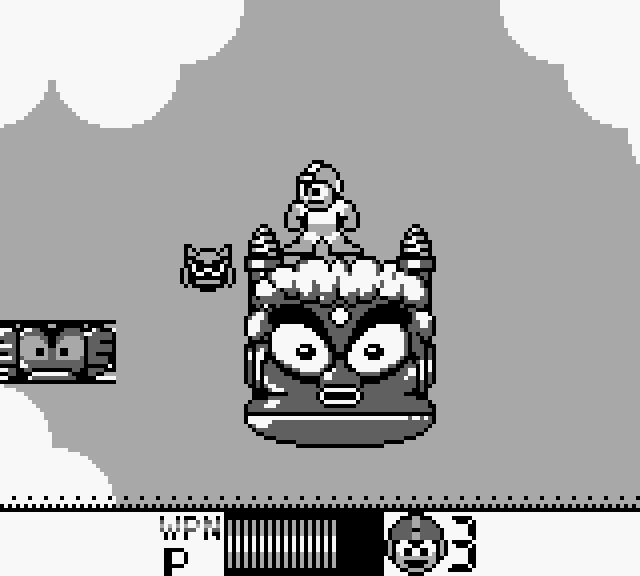 Just the actual end credits though, and not the music that goes with them. Or, for that matter, the music in any section of this game. While the first game tried to redo the classic NES tracks for the Game Boy hardware, and did a pretty decent job of it, this new game has an entirely new soundtrack for it. This soundtrack is, without a doubt, awful, full of hard chirping songs and entirely too much in the way of piercing bleeps and terrible riffs. I don't know why the designers went with a new soundtrack instead of just giving us more of the same from the NES games (since that worked so well the first time around). Whatever their reason, this is the first Mega Man game where I actively muted it just so I could play the game itself.

So where does that leave us with the game? I certainly have mixed feelings about it. The early half of the game is great, and I do enjoy the later Robot Master stages even if I find the increase in difficulty to be a bit much at times. The last section of the game, though, is pretty terrible, a sad end to a decent game. Mega Man II certainly had promise, but it just can't quite carry it to the finish line. I think, really, I want to like it more than I actually do, which leaves me at a crossroads trying to justify enjoying a game that stumbles so badly at the mid-way point.

As an occasional play, Mega Man II can sustain my attention, but only in short bursts. It's not great, especially if you try to play it with the soundtrack on, and it wouldn't rate anywhere on my list of top Mega Man games. But who knows, maybe the next game in the Game Boy series will do better? 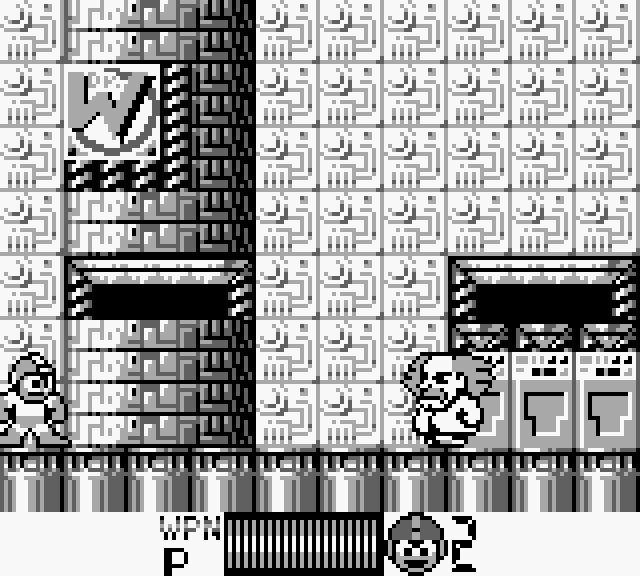 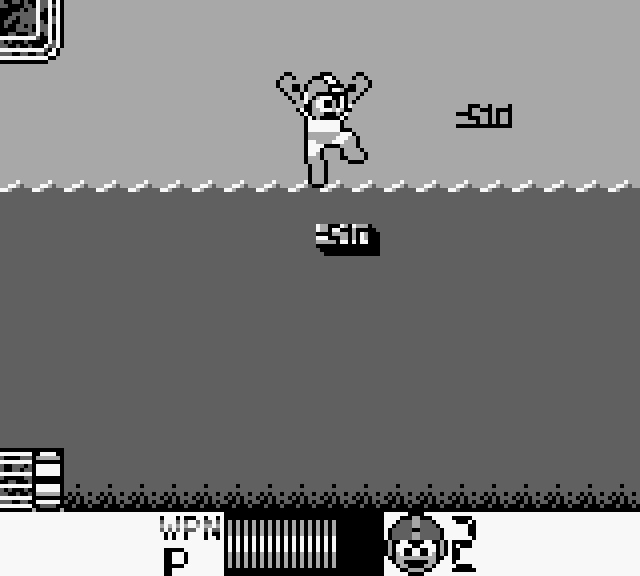