Of Course Wily Is In This One

Okay, so after the steady improvements of Mega Man 2 and Mega Man 3, where could the series go from there. Sure, some would argue the next official title, Dr. Wily's Revenge was a bit of a step back for the series, but I certainly liked it's effort to push the series down into a hand-held factor. Each step for the games, then, have evolved the Mega Man brand in new and interesting ways. 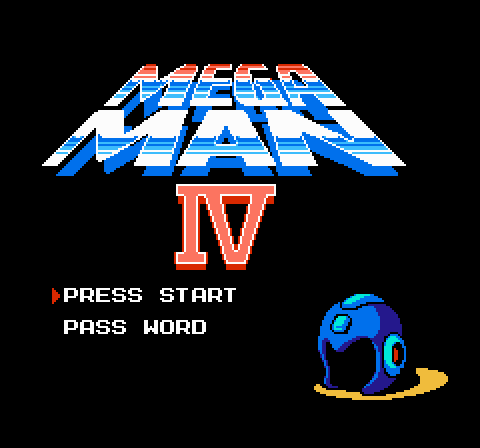 Sadly, that run of luck would run out with Mega Man 4. While I wouldn't say the game is awful, I would argue that the fourth main-line title in the series did little to push the series forward. In most case it felt like the series was simply treading water, making another game of the same formula to fill time and get dollars from the adoring public. Hell, this was the fourth NES entry in the series in five years -- at a certain point the games come out faster than the innovation can happen.

That's not to say there weren't a couple of (slight) improvements over the previous game. For starters there's the Mega Buster, which can now be charged up to unleash a green burst of energy. This power-up can be useful, blasting through enemies upon which the standard, "lemon" shot would simply plink off. It's weird that the Mega Buster received this upgrade in Mega Man 4, though, when Pharaoh Shot -- another charging weapon -- is also included. The Shot is so much better than the standard Mega Buster, including the fact that you carry the Shot above your head as it charges (providing a better shield than arguably even the shield weapon in this game, the Skull Barrier), once you have the Pharaoh Shot you might never care about the Mega Buster again. Still, in some contexts especially early in the game, the Mega Buster upgrade can prove useful.

Then there's Dr. Cossack, the (supposed) new villain of this game. Naturally, every kid expected Dr. Wily to show up, and weren't in the least bit surprised when he did in the last act. Still, having a second fortress to explore in this game after the eight Robot Masters were defeated was a nice way to push the mid-game without just reusing stages (as in the Doc Robot stages of Mega Man 3). The Cossack stages are pretty good too, tough but interesting, and arguably his castle is better than Wily's. Still, it's not as if there was any real twist to him, so while the longer mid-game was nice, Cossack himself is kind of a dud.

This does speaking to a larger issue with Mega Man 4: it's all over the place. There are a lot of ideas in this fourth game for the series, but it doesn't feel like many of them are all that well implemented. Let's start with the various utility items Mega Man gets. Rush makes his return in this game, with Coil, (nerfed) Jet, and (still useless) Marine all coming back for a second go round. Joining these items are two secret utilities, Wire and Balloon. That gives Mega a set of five utility items to use in exploring the game. 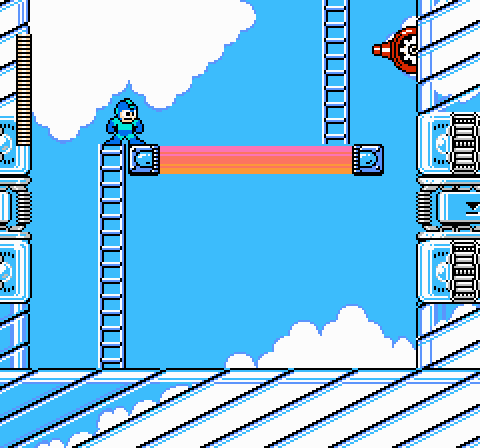 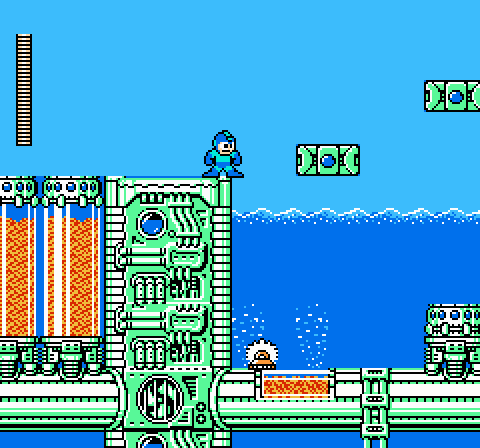 At first blush that sounds great -- five items are certainly better than three, right? Sure, except the items are all of wildly varying quality. For starters you have both Coil and Wire, two items that, in essence, do the same thing (and, I would argue, Wire does it better). Most of the time you won't use either, though, because the Balloon item (which creates platforms) is so good you won't need anything else (for an illustration, go watch any speed-run of this game -- Balloon is basically broken in the best ways). And then there's Jet and Marine, two items that are now useless in all but very select situations. Why include five items when only two or three are really needed in this game?

The same issue holds true for many of the Robot Master weapons. Sure, you still get the fully compliment of eight (so this game is going better than the first title in the series), but you're really only going to use two or three of them at most through the various stages of the game. If Ring Boomerang or Pharaoh Shot can't carry the day, freeze the enemies with Flash Stopper and then move on with your life. Sure, you have a screen-clearing item, Rain Flush, and two different missiles, and a totally useless shield, but five-to-one says you go back to Ring and Pharaoh for almost everything you do.

The Robots, too, are a really weird bunch; a mish-mash of ideas that don't really seem to work in any context. As an elaboration, let's go back to the first game: in Mega Man, it's established that the Robots are servants for humans, machines to do the dirty tasks at dangerous job sites. Sure, some of the bosses are a little odd -- while the construction-themed Guts Man makes sense, what is the purpose of Cut Man and his tall, tall tower? -- over all there's a cohesion to the Robots and their purpose. There was a similar intent clearly in Mega Man 2 with the Robots clearly having an intended purpose -- factory-set Metal Man, forest-protecting Wood Man, deep lava Heat Man, and the like.

But for the most part I can't figure out the point of any of the robots of Mega Man 4. Sure, Ring Man at least feels of a piece with the likes of Crash Man and Gemini Man, but who thought Skull Man or Pharaoh Man were necessary bots? What is Pharaoh Man's job? Armed info bot for pyramid museum tours? The bots of Mega Man 4 don't feel like they have any specific intent but were just thrown together because the team at Capcom had to come up with eight "themes" and they just drew randomly out a hat. 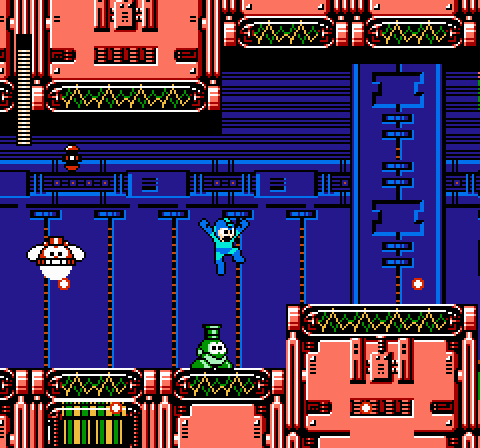 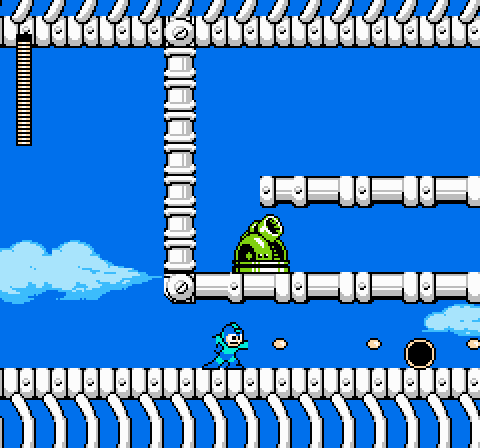 And yes, before someone brings it up, I do realize there have been odd-ball bosses in every game so far. Along with the likes of Cut Man there was Quick Man (how are force beams OSHA compliant?) Top Man and Snake Man. A certain creative flair is expected in this game, but I do like a sense of purpose to most of the designs, and I just never got that from Mega Man 4. The stages are, at times, fun in their own context but the game never comes together as a cohesive whole for me.

That lack of cohesion then leads to a bigger issue: the game just isn't very memorable. Sure, there are moments I enjoy -- the mummies coming out of the walls in the pyramid, the design of Toad Man's underground waterworks -- but most of the game is forgettable. I went back through and played the game recently and, nine times out of ten, once I'd finished a stage I forgot most of the salient details about it. This is a game you react to in the moment, but hardly care about after the fact. It's there and gone without creating a lasting impression.

And I think it all tracks back to the constant, steady release schedule of the games. The Mega Man series was making money and Capcom wanted to crank them out. So the team did, but the quality suffered in the process. Mega Man 4 isn't a bad game by any stretch of the imagination, to be sure. It's just that after the soaring heights of Mega Man 2 and Mega Man 3, this fourth main-line entry in the series doesn't do enough to make it better (or even on-par) with the classics we'd already gotten. It's fine when we expect great.

Capcom would have to do more to really make the series great. Thankfully, the next NES title in the series would be a much more interesting adventure all around. But we'll have to get through another Game Boy title first before we get there... 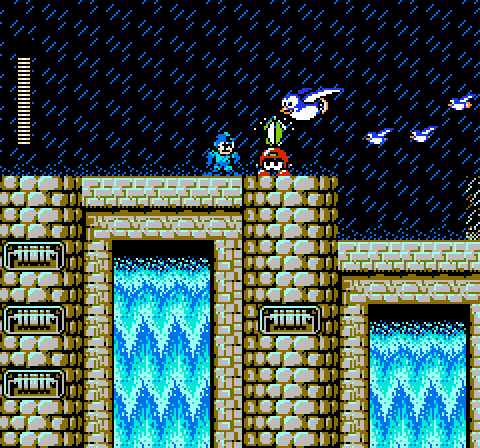 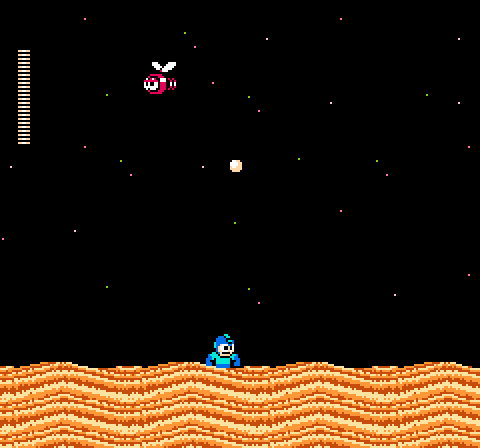