Another End of an Era

Capcom is nothing if not willing to take something that works and iterate on it over and over again. This isn't just a note on the Mega ManIn 1987, Capcom released Mega Man on the NES, a game featuring a blue robot that fought other robots and took their powers (so that he could then fight other robots with those powers, and on, and on). The series went on to release over 50 games in 30 years and become one of the most famous gaming franchises in the world. series as the Street Fighter series also saw it's fair share of menial upgrades every year for a solid decade. It's more just the point out that when a game does well you can expect a sequel with minimal variance to come out soon after as that the company's standard practice. That's why, after the retro-inspired success of Mega Man 9 the company leaned into it and almost immediately greenlit a very similar sequel, Mega Man 10. 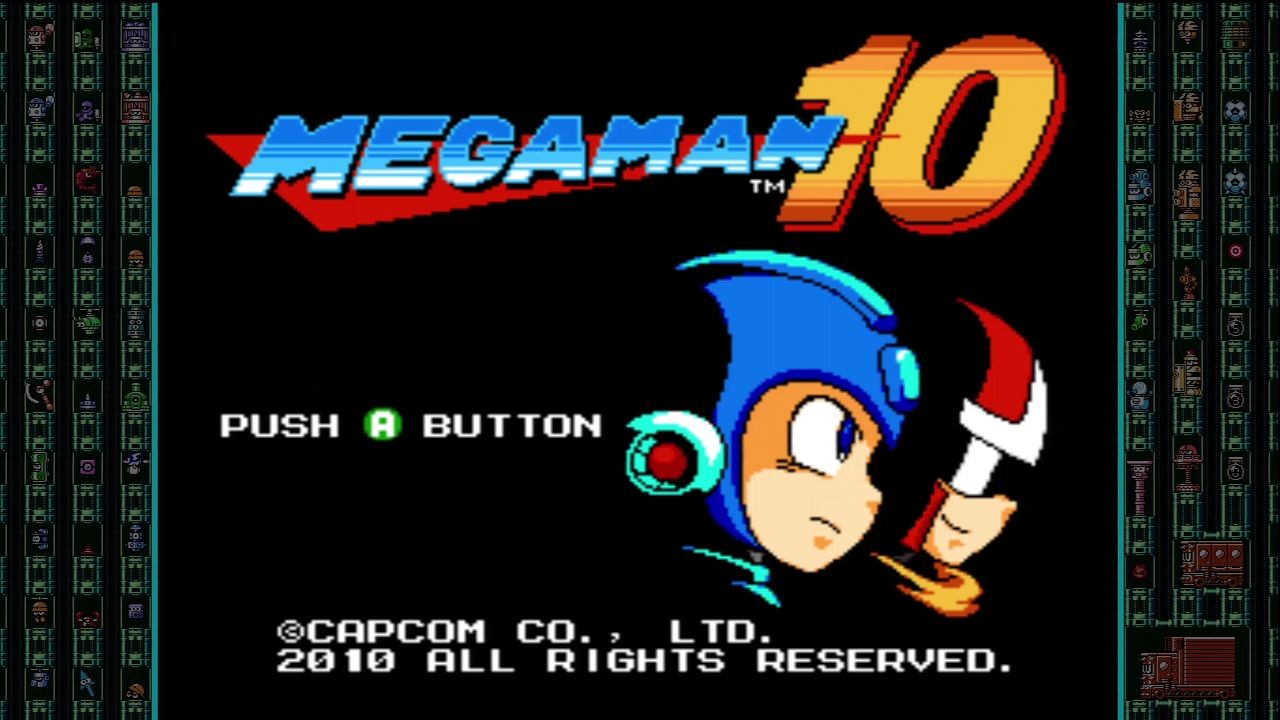 This isn't me complaining about Capcom iterating into the ground, certainly not after two games. The cracks are starting to show with this game, but since the company took another hiatus from the Blue Bomber after this game (trying, and failing, to create a number of other Mega Man games that failed to come to fruition before the successful release of Mega Man 11), and if this version of the series had continued on much longer it's easy to see the retro-fun lark becoming a staid and disappointing run of repetitive games. We didn't get that, and I think Mega Man 10 stands up as well as it goes because it's just one sequel and not a harbinger of what was to come.

If you've played Mega Man 9 then this tenth officially numbered entry is going to feel pretty familiar. Like its direct predecessor, Mega Man 10 is a retro-inspired sequel to the Blue Bomber's adventures. Displayed in loving 8-bit graphics and chip-tune sound, this entry continues the "return to his roots" ethos of the ninth game in the series. Gone are all the big changes and digression the series took in its middle sequels, instead presenting a Mega Man that can run, jump, and shoot (okay, and occasionally some a dog), without all those fancy charged shots, slides, super balls, or whatever other oddities Mega picked up over the years. It's a stripped down, well made, retro romp that promises something very specific and delivers just that.

And, if what you're looking for is more of the same from Mega Man 9, this sequel gives you exactly what you asked for. It follows the same formula as the previous game, right down to similarly designed menus and basic functions of the Blue Bomber himself. If the series peaked for you with Mega Man 2 then this game is just for you. It has everything you want -- eight robot masters, their weapons, and then a single Wily castle to traverse with your ill-gotten gains -- and nothing to get in your way. It is, at it's core, a very basic and familiar package, but then that's what it was designed to be.

For the most part, this retro formula still works. The game is just as well made as the ninth numbered title, just as easy to get into with the same, familiar, pick-up-and-play functionality of all the NES games in the series. It's obviously lovingly made, a joint effort by Capcom and Inti Creates that upholds the same design and development standards as the previous game. It is, at its core, exactly what you expect from a sequel to Mega Man 9, nothing more and nothing less... and I think that's where my problem with it comes in. 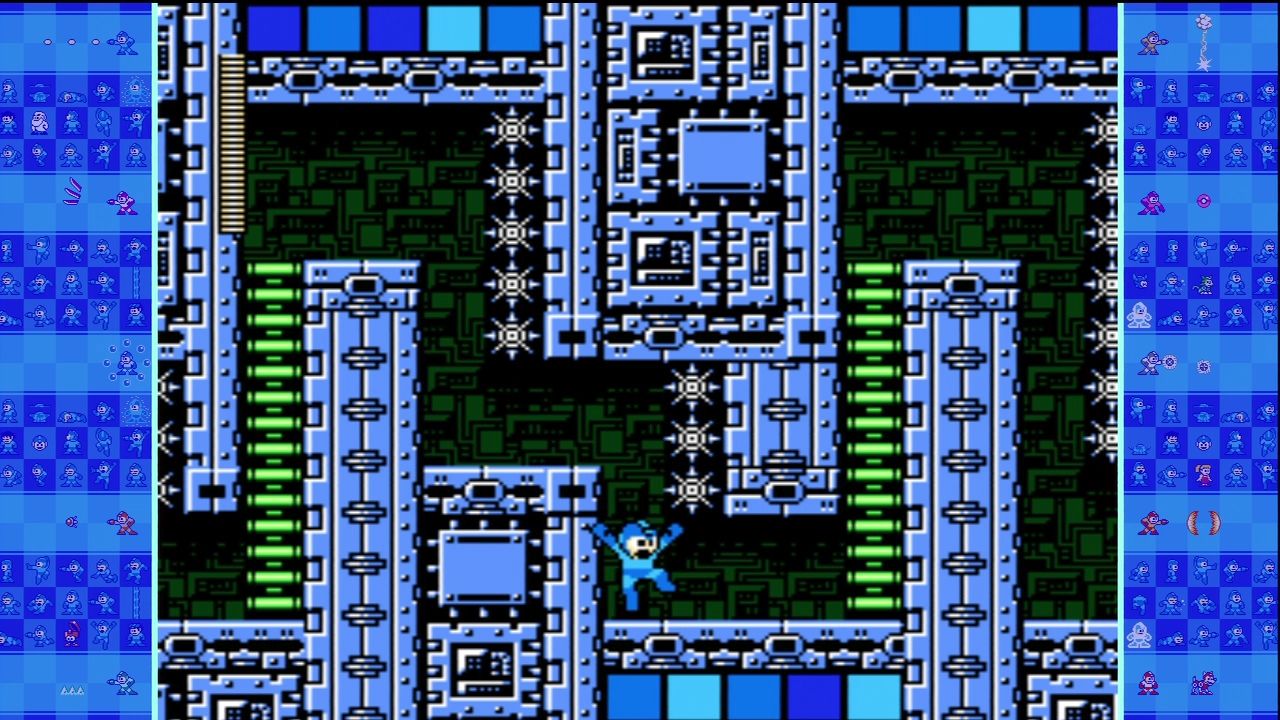 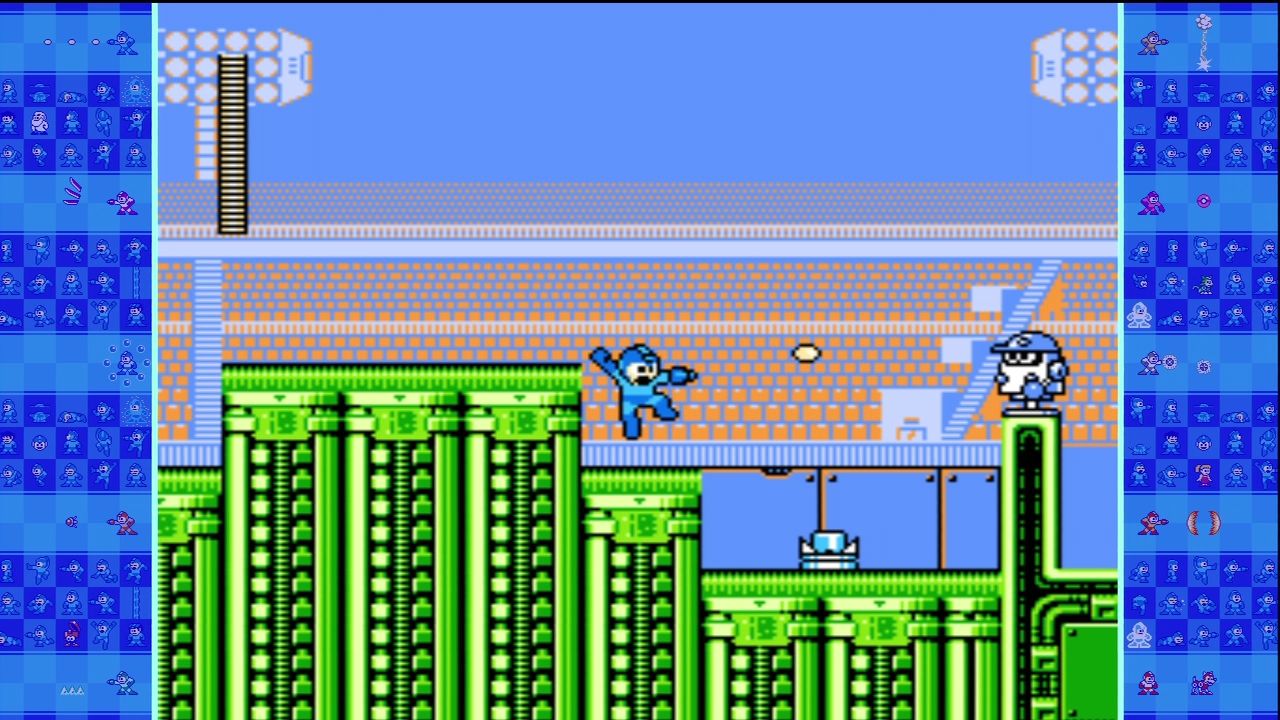 Because it's a direct sequel to the previous game (in all but the actual story because, lets face it, no one comes to these games for the story), I can't help but compare Mega Man 10 to Mega Man 9 and, honestly, I feel like the previous entry did all of this better. For starters, Mega Man 9 got here first. For three titles -- Mega Man 7, Mega Man 8, and Mega Man and Bass -- the series tried to push past its retro roots, to determine what Mega Man could look like on modern consoles. I wouldn't say any of these games were 100% successful but each at least tried to be more than what came before.

Then came Mega Man 9, after years of wait, and its return to the NES roots made it feel fresh and new and interesting again. It was different because it was familiar, bold and new by being old and the same. We didn't realize we wanted a straight up return to Mega Man's roots, but clearly that's what we needed because just about every fan of the series hailed number nine (but not Mighty No. 9) as a glorious return to form for the flailing franchise. The fact is, though, that after all the changes, the updated graphics and new play styles brought in by the later sequels, the retro trick of Mega Man 9 could only be pulled once. After seeing it done, any games after that did the same thing had to start doing things better (or adding in new features) to not just feel like the same old shtick.

And that is the problem with Mega Man 10: I don't think it does anything better (or, at times as good) as Mega Man 9. While things seem bright on the boss select screen, as I will admit this game features some really odd and out there bosses (like Strike Man and Sheep Man), their stages aren't all that inspired. There was a lot of goofiness to be found in the previous game, from Hornet Man's danger garden to Splash Woman's slowly draining water platforms and attack dolphins. I never felt like that same level of creativity from the previous game extended to the main stages of Mega Man 10 -- most of them seemed like the usual environmental areas, with the usual ice level, the expected fire level, the done-before sewer level. Even the weird ones, like Strike Man's sports-theme stage, were more annoying than enjoyable.

This also extended to the weapons from the bosses which neither felt as inspired or as useful as in Mega Man 9. There was only one stinker in the previous batch, Tornado Man's screen-clearing Tornado Blow, and even that one could be argued to have some utility to it to try and redeem it. By comparison there are only two or three weapons in the arsenal of Mega Man 10 I would consider using regularly through the game and a number of them I outright avoided unless I was fighting the boss weak to them. 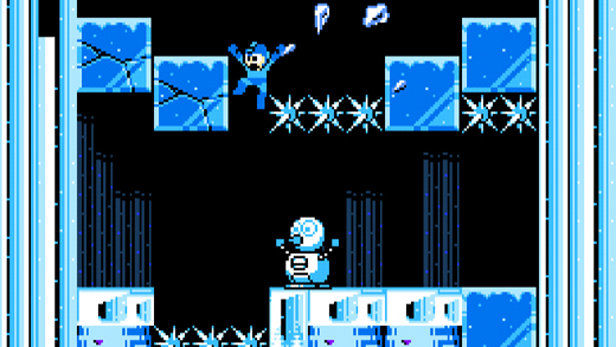 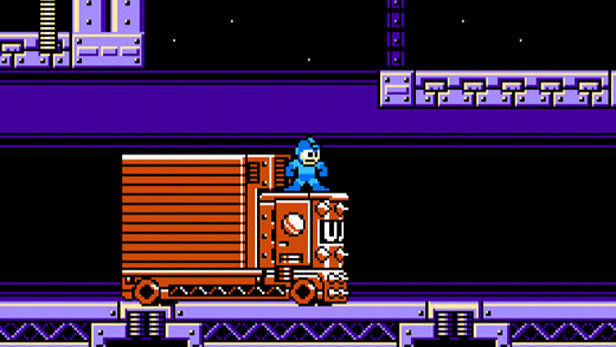 The lack of inspiration, I will admit, didn't extend to all the bosses themselves as they are some very creative inclusions in this game. I giggle every time Pump Man, who is designed like a literal water pump, would grab his handle and pump out his shield. Similarly I was amused at how Strike Man would punch his baseball glove when he was angry. And many of the Wily Bosses were amusing, from the giant crab boss to Wily's Pirate Capsule. Someone on the team was clearly delighted to let their imagination wander as some of these baddies are the most inspired I've seen in the series.

And yet, many of the other bosses lacked that same inspiration. Blade man looks like a sword, Commando Man looks like a commando, Chill Man is just a icy guy. Most of the designs in the game aren't all that interesting, and that extends to the fact that so many enemies in the game were pulled from previous titles. it makes the game feel like a cranked out copy of what came before, something thrown together quick on a deadline, no matter how much the people involved might have cared. Moments of inspiration don't help cover for an otherwise ho-hum reiteration.

What surprised me, though, was that it's the late game (for once) where the game really comes together. Normally I love the opening bosses but it's Wily's Castle where everything becomes rote and repetitive. Not here, though, as Mega Man 10 has possibly the best Wily Castle in the whole series. It starts early with the grungy walk through the first stage, as Mega is forced to battle three sets of bosses inspired by the Robot Masters throughout the series, the various iterations of the Weapon Library. Then there's the conveyor filled second level, the vertically tower (with very cool elevator sections), and then the final stages with a big trip (that I won't spoil) to Wily's satellite. It's fantastic. Whatever qualms I have with the main game don't extend to the end game.

To be fair as well, there's a lot of bonus content in this game for players to dig into. For the first time, Protoman is a playable character from the start, a solid character who, nonetheless, is hard to play since he takes double damage from all enemy attacks. If you want to make it even harder on yourself you can also switch on Hard Mode which makes everything (including the bosses) vastly more difficult (and you have to do is play through the normal game once to unlock it which is better than making it paid DLC like in Mega Man 9). For pros looking for a deeper game they can really spend time mastering, this title has a lot to offer. 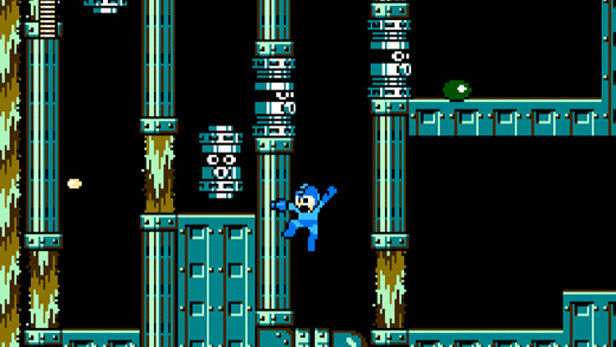 That's part of the reason why, despite my qualms with the base package, I do think Mega Man 10 is a pretty good game. It's just that the lack of inspiration that I feel while playing it, the sections that feel like rushed product, hold it back from greatness. I would put Mega Man 9 in the upper echelons of the entire series; Mega Man 10, though, is just a solid, by-the-numbers, what you expect game in the series. It's good, like Mega Man 5, without quite bringing it together to be sensational.

I'm just glad Capcom wisely took time off again before coming out with their next official entry in the series. If Mega Man 11 had come out a year or two after this one in the same retro style I think it really could have been a dog. Once in this style was great, twice was enough, and three times would have been two much indeed. 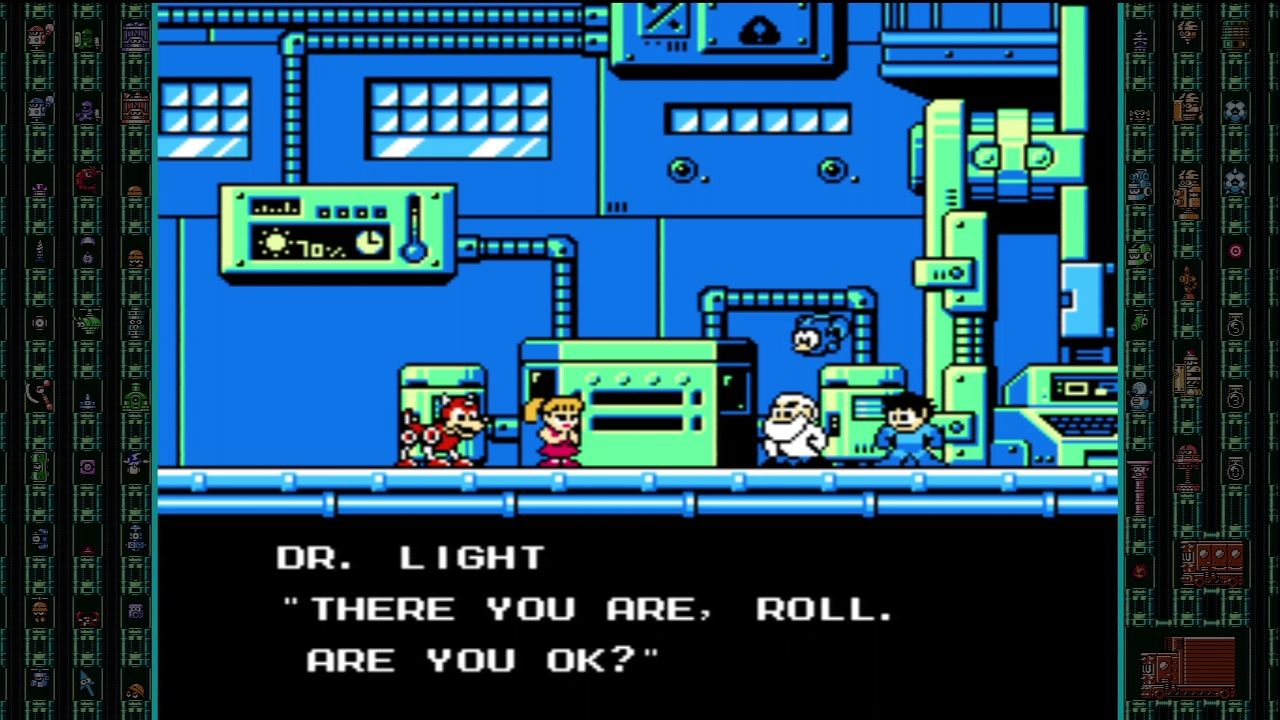 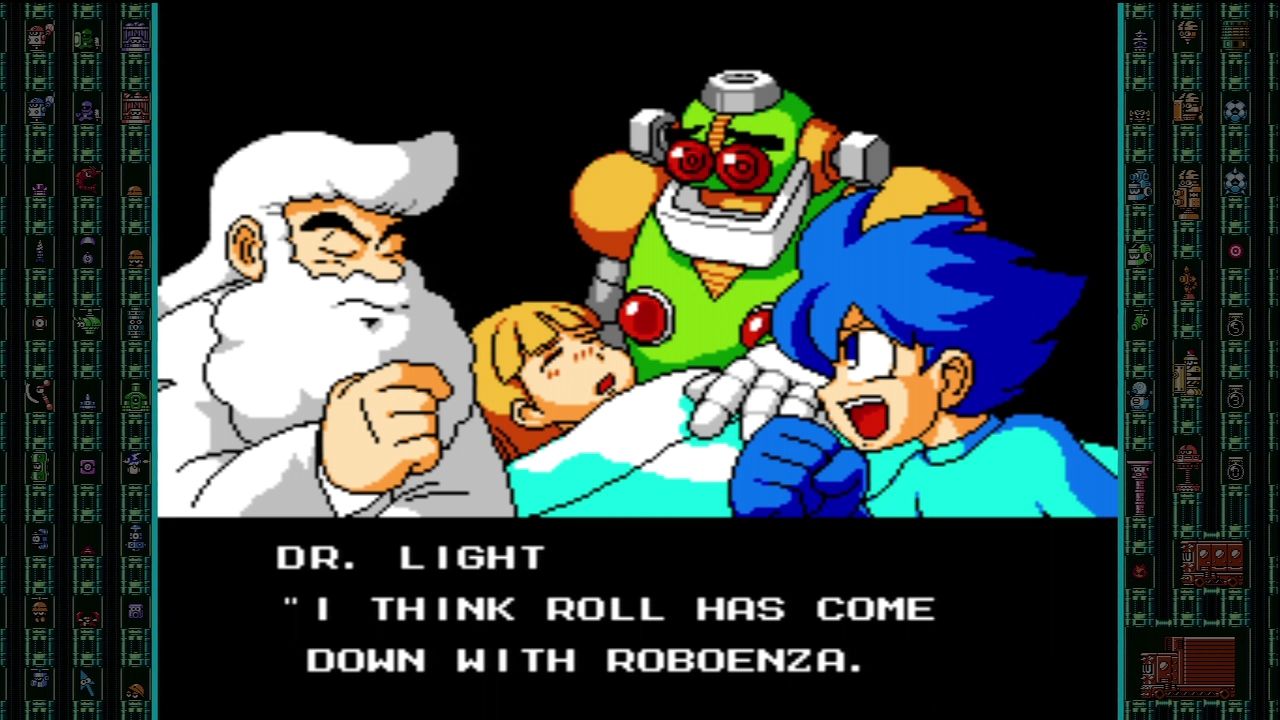 These three came as DLC after the initial release, giving three stages with three new bosses and new special weapons to earn: