Last time, we visited a game that tried very hard to push the boundaries of the Mega ManIn 1987, Capcom released Mega Man on the NES, a game featuring a blue robot that fought other robots and took their powers (so that he could then fight other robots with those powers, and on, and on). The series went on to release over 50 games in 30 years and become one of the most famous gaming franchises in the world. formula. Today we're going to look at a more traditional, but no less interesting, Blue Bomber title: Mega Man Unlimited. Released in 2013, this game tells a tale that, seemingly, gears up the franchise to move beyond the classic series and into the Mega Man X franchise (since, admittedly, it came out at a time when the series looked to officially end with Mega Man 10). It's an interesting take, and while obviously not canon (not only because it appears the franchise is continuing on post-Mega Man 11, and also because it's a fan game), it's still cool to see the creator try to fill in gaps in the franchise's mythos. 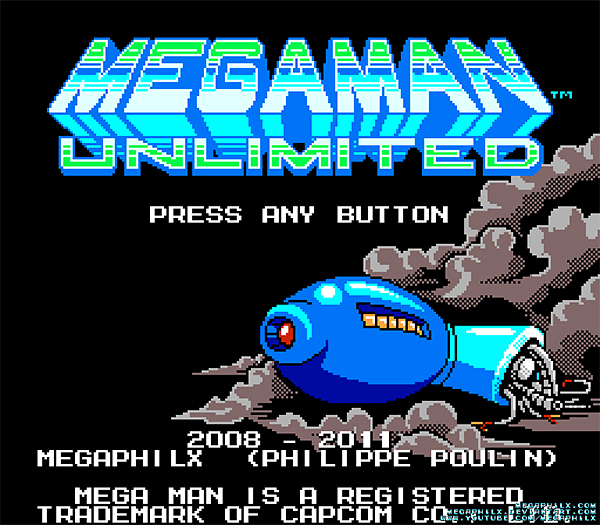 Set sometime later in the series, Unlimited tells the story of Protoman who, one day, seemingly goes evil and takes Dr. Wily hostage. Coincidentally, of course, eight new Robot Masters show up on the scene to terrorize the world and only Mega Man has the power to face off against these new foes. It's up to our trusty Blue Bomber to blast through these eight stages before taking on Protoman in his "Occupied Dr. Wily Castle". What happened to Protoman, and why he's gone down this dark path, is a mystery Mega Man will have to solve (although if you know this series you probably already know the answer).

So, as I said, this is a very traditional game. You start with eight Robot Masters to fight, all up front (like a classic game and not the Game Boy adventures or Mega Man 7 or Mega Man 8). When you defeat a boss you gain their power, like always, but there's no other gimmick here -- no gaining special characters to play as (like in Mega Man: Rock Force) or unlocking paths through the menu screen (like in Mega Man and Bass). And then once you're done with the main eight stages it's on to Wily without any mid-point castle, Doc Robots, or any other silliness to pad the game.

Well, okay, with one exception: this game has collectible letters in it, much like most of the series since Mega Man 5. Traditionally when you collect the letters you gain Beat who will come to your aid in battle. Of course, some of the latter games have changed this mechanic, but this game does something very different indeed: collect all four of the "YOKU" letters and you unlock a bonus ninth boss, Yoku Man, and his stage "Deathtrap Dungeon" (which has one of my favorite tracks from the soundtrack). This isn't a necessary stage (unless you feel like getting 100% in the game), but it's a nice inclusion and adds a little spice to the play through.

So it's otherwise a basic Mega Man game at it's core. But I don't think that's a bad thing. Even playing within the formula of the series developers can still find ways to push what that formula can do (as Yoku Man here proves). There are a number of points in this game, traditional as it may be, that point the creativity possible within the series' basic structure. The levels in the game, for example, have a lot of creativity in their design. Take for instance Trinitro Man's stage, with its dangerous platforming made worse by the tiny, exploding blocks you have to traverse. Then there's Nail man, who's stage combines the vertical aspects of Elec Man's stage with the awful platforms from Guts Man. These lengthy stages provide challenges, sure, but also creative uses of the basic structure of the series. 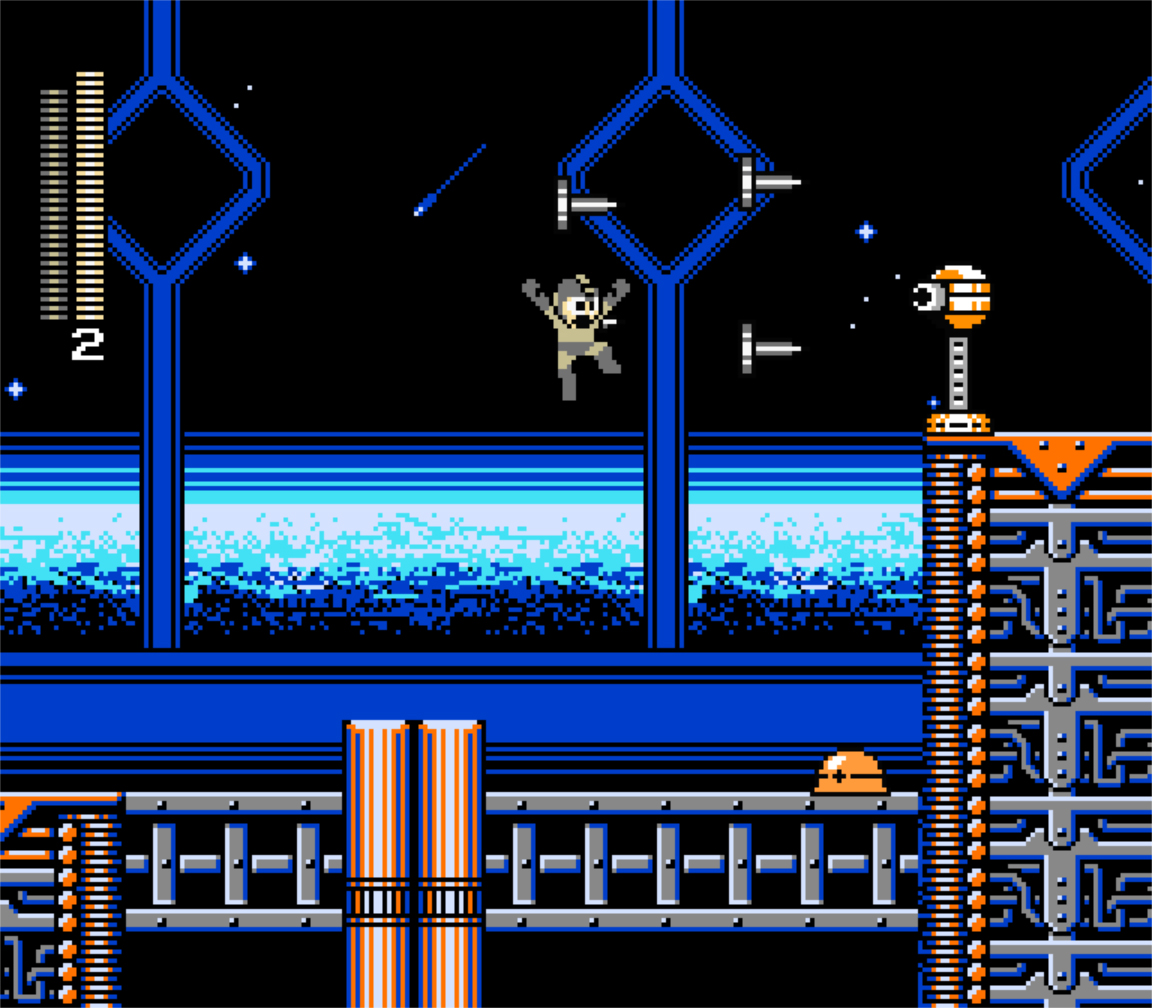 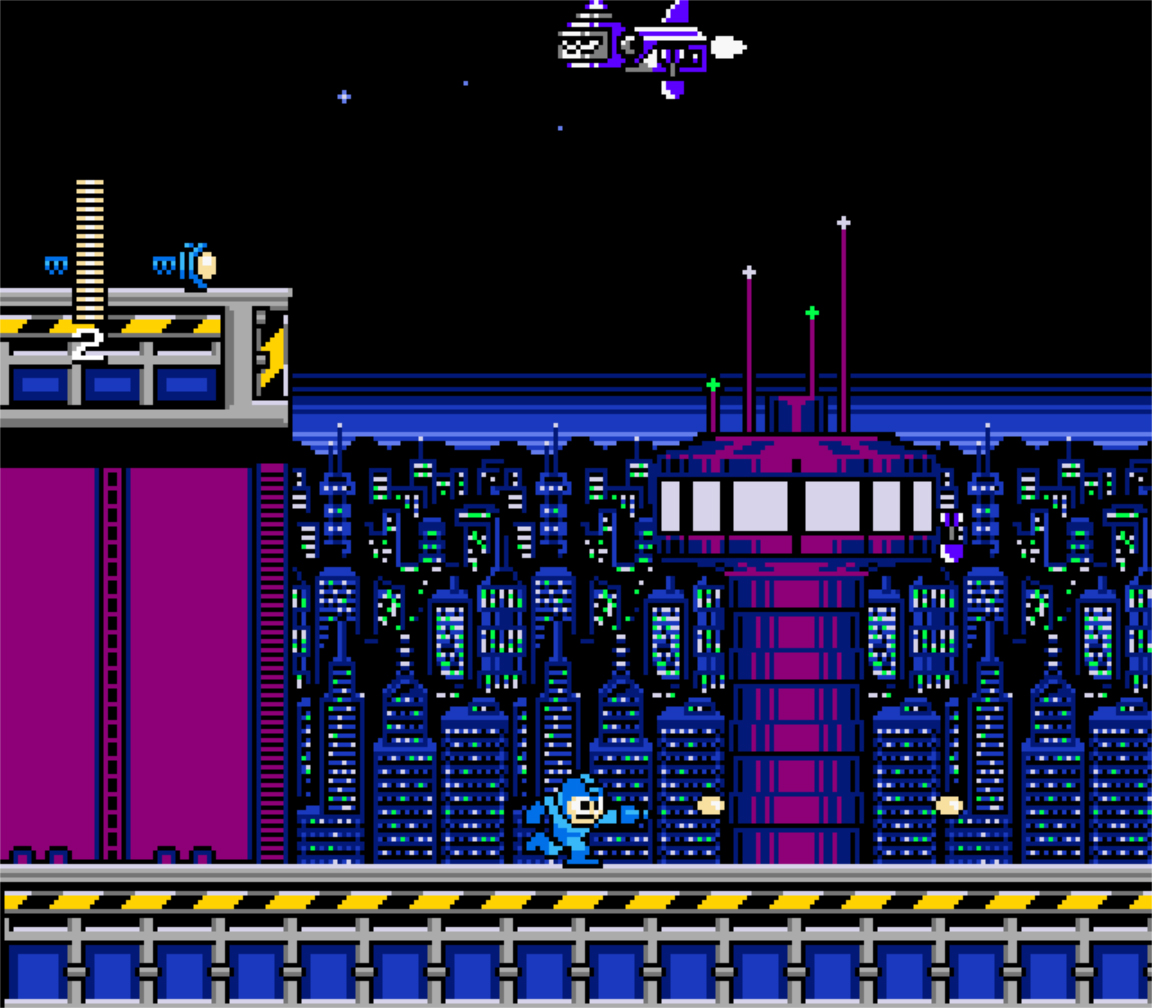 That said, the stage can be quite lengthy and sometimes that's a detriment to the game. Often times it felt like there were only two checkpoints in many of the stages -- a halfway point and right before the final boss door -- meaning that a death could prove to be quite costly on time and resources. Most stages feel like they're up to twice the length of a standard Mega Man stage, meaning a death could put you back the entire length of a stage in a normal game (which, bear in mind, usually had two to three checkpoints in a stage before you even got to the boss). This is punishing at times, especially when you consider how dangerous many of these stages can be.

Remember, this is a fan game. As we discussed when reviewing Mega Man: Rock Force (and the officially unofficial Street Fighter X Mega Man as well), fan games are notorious for being difficult. For a basic players like me, one who struggles at times with the difficulty of the main series, Unlimited can feel downright brutal at times. But then I'm not the expected audience for fan games; these works are designed for hardcore fans who have cut their teeth on what the main series has to offer and want a bigger challenge to traverse. And that's fine, but it does limit the audience for adventures like this somewhat.

Take Rainbow Man's stage, for example: This stage uses Quick Man-style lasers throughout, and they move as fast (if not faster) than their precursors. Worse, there are new traps included with the lasers that can make them even more deadly, like prisms that break them out into triangular waves that can fill half the screen. I've seen pro players struggle with this traps and I'm nowhere near a pro-player. If they have to repeatedly play these stages over and over amid the constant deaths, how many times do you think I died in these same places? (Answer: far more often than I'd like to enumerate.)

Then there's Yoku Man's stage. Admittedly, this is a bonus stage and as such getting to it is already a challenge. Seriously, each of the sections of the stages that have letters are punishingly hard to traverse, a more difficult variant on the already difficult stage that had to be explored to begin with. Getting to Yoku is half the battle right there, but his stage then cranks the difficulty up another 50% or so in a painful (but, admittedly, wild) adventure to try and get to the end of his labyrinthine dungeon. To be able to 100% the game you need to have top-level skills; sadly, if you manage to collect the Yoku letters you have to fight Yoku, so even if you can't beat his level there's no going back. A bit of an issue of design there that may stop some players from completing the game.

Oh, and just as a side note: Yoku Man's stage is a constant flurry of flashing colors and blocks. Anyone with epilepsy issues probably should avoid playing this stage. 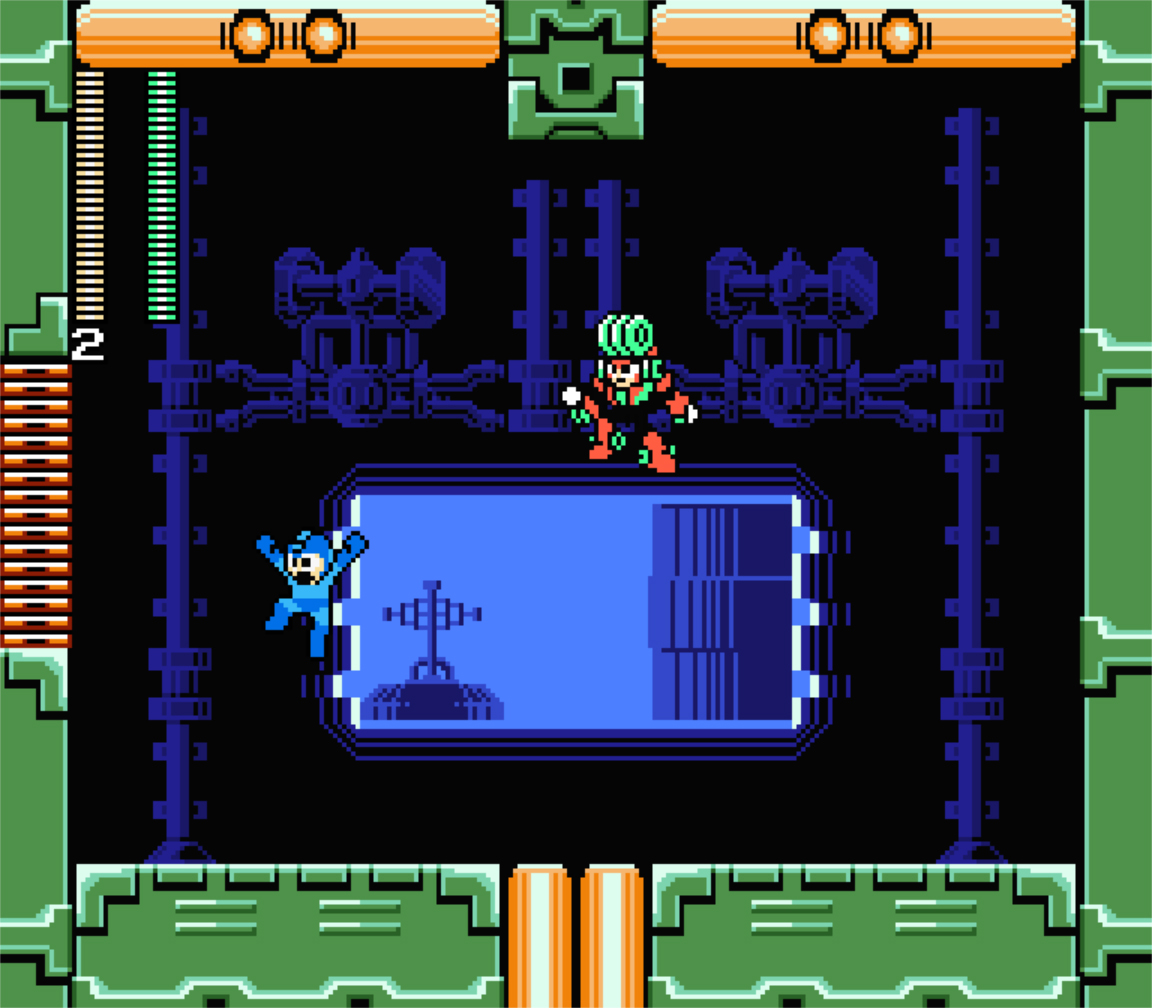 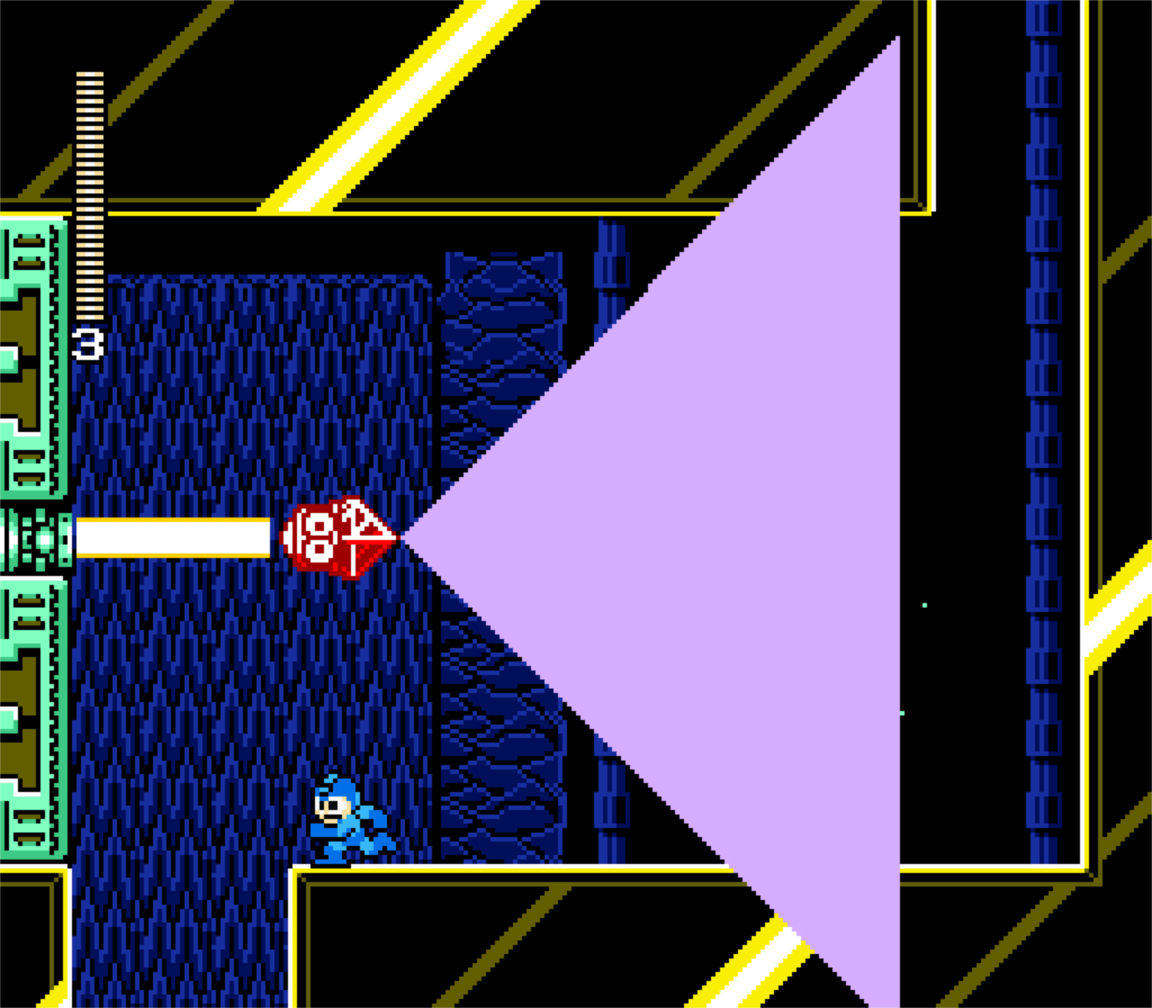 If anything, the game around the eight Robot Master stages is laughably easy by comparison. The eight boss fights are jokes, especially if you have their weaknesses. The robot master weaknesses should help to make the fights easier, but these robots are so weak to their allergies that it trivializes the fights once you know the boss order to take. It's hard to find the right balance for these boss encounters -- the main series struggles with this as well -- but it shouldn't feel like the climax of a stage is actually the easiest part of the adventure by a landslide.

And then the Occupied Wily Castle is kind of a joke as well. Sure the stages are long, and complex, but once you have all the Robot Master weapons you have an arsenal that could defeat any challenge, especially with how frequent and prevalent ammo drops are. You never really have to worry about conserving because you'll always have thee ammo you need on hand for a given weapon, and if that weapon somehow runs out, Unlimited has six other choices that are all equally as good. It's amazing, but it also makes the last few stages of the games feel so much easier than the climb that came before.

Plus, honestly, the last fight is just annoying. This is a spoiler for a six year old fan game, but this game tries to tie the classic series into the X series by having a Zero prototype developed by Wily be the last boss of the game. It's an unwinnable fight, note, so no matter what you can do you can't beat the boss at all. It's obnoxious, a last encounter that ends the game with a whimper instead of a bang. I understand what the developer wanted out of this encounter, but it just doesn't work.

And yet, as with Rock Force, I feel like the flaws in Unlimited don't hold the game back in my opinion. This is still the work of a dedicated fan, MegaPhilX, and released for free into the wild. If this had been an official Capcom product, and they had charged money for it, I probably would be very upset with it (not the least because of what the game does to continuity with the Z-Prototype), but as a fan game that can be enjoyed and then put aside with very little investment, Unlimited is a treat. It may not be perfect but it damn sure has its moments.