For the most part I don't feel the need to go over all the various re-releases and compilations for the classic Mega ManIn 1987, Capcom released Mega Man on the NES, a game featuring a blue robot that fought other robots and took their powers (so that he could then fight other robots with those powers, and on, and on). The series went on to release over 50 games in 30 years and become one of the most famous gaming franchises in the world. series. We don't need to get into the minutia of the various Virtual Console releases and what random bonus artwork and soundtrack modes are included in each of the compilation titles. While the care put into the emulation of the Complete Works/Anniversary Collection might be different from the Legacy Collection titles, they are all largely the same (although I'm sure some purist will yell at me for that). Mega Man is Mega Man, so if you've played one more of them you've played them all. 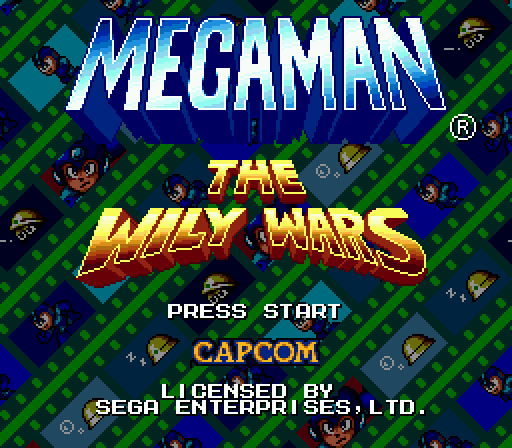 That said, there is one collection of ports (the first collection of ports produced for the series) that I do want to touch upon: Mega Man: The Wily Wars. Released in 1994 for the Sega Genesis (or Master System, depending on your region), this was the first time any Mega Man games had appeared on a Sega system. It's a port of the first three games -- Mega Man, Mega Man 2, and Mega Man 3 -- with improved graphics and some bonus features. It's a neat little collection, and if you were one of the unlucky kids to live in a Sega-only household at the time, this was a total gem.

It's also a title many casual gamers in the United Stated have never heard of. While the collection was officially released on cartridge in Japan (as Rockman Mega World, a play on the Rockman World titles for the Game Boy) and in Europe, this game was only ever available in North America as a Sega Channel exclusive. You remember that, right? It was a way to subscribe to Sega and get a monthly, curated collection of games to play. Download them, play them, and then once they're gone they were usually gone for good. I had a friend that had the Sega channel and we spent hours on this game along with the likes of Sonic, Aliens, and Castlevania: Bloodlines. The channel was interesting, but Capcom releasing this port exclusively to that add-on was a bit of a bummer.

It's shame, really, because this port is actually pretty fun to play. Being able to go back through the first three titles in the series, but now with improved graphics and (arguably) sound was a huge bonus. For a casual gamer everything in the game is placed exactly as you remember with the various levels and enemies lovingly recreated just as you remember, only shinier. The fidelity to the original titles is, for the most part, spot on, down to the fact that the original Mega Man still has point drops and a score counter. You can take a proper stroll down memory lane with this collection and enjoy these classic games (almost) like you remember.

But there are a few caveats to that. For starters, the music is absolutely atrocious. I know the Genesis has its devotees, but I personally hated the sound board in the console. The hardware produces some of the worst sound and music, making everything sound like it's played by what a bad synthesizer thinks a trumpet is supposed to sound like. Everything sounds like it was run through a 1990s filter designed to turn everything into a blare from a horn. Despite it often sounding like the team behind The Wily Wars tried to do a decent remix on the various tunes in the game, they all still sound so bad. 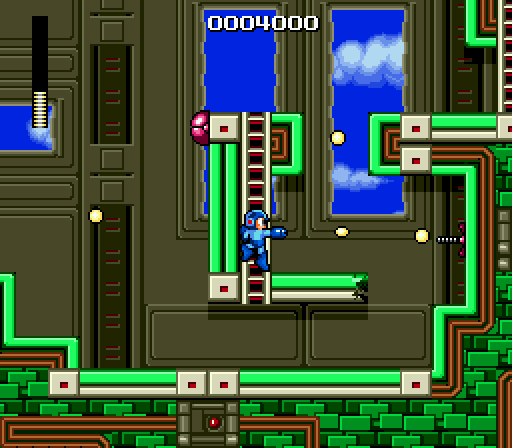 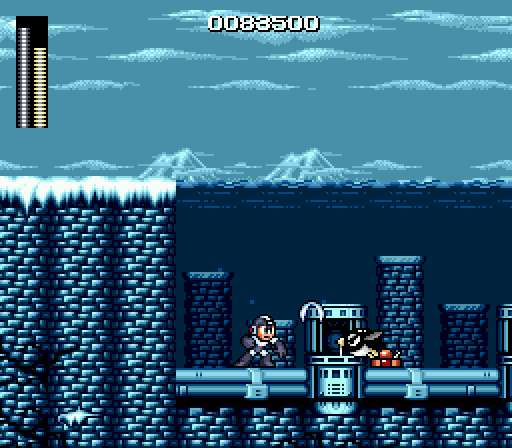 And honestly, for a 16-bit upgrade of the original titles this game really isn't that pretty. While the extra spit-and-polish on the base sprites is nice, the upgrade isn't always that nice to look at. Some backgrounds are more detailed, especially in the first game, and most levels now feature parallax scrolling to give the play field a sense of depth. Most of the upgrade feels like it was put on the first title, though -- that game was pretty sparse looking and the new graphics really give that game depth and pop. By comparison, Mega Man 2 and Mega Man 3 were much more detailed, and neither of them feel like they were as upgraded in this game. Hell, the third title actually looks worse in places (like Gemini Man's new, ugly stage graphics).

The game also features a few weird changes from the original titles. Firstly, Mega Man has the wrong music on its loading screen (instead swapping in the intro music from Mega Man 3) and ending roll (instead using the Mega Man 2 music). Other little tweaks have been made as well, giving some weapons a touch more ammo, making the Mega Buster seemingly less powerful in the first game, and fixing Top Spin so it doesn't drain all your ammo instantly. Some of these touches feel like re-balancing adjustments, which I can appreciate, but other changes (like Magnet Missile locking on to any random projectile) are just bad programming.

Then there are the limitations of a shared engine between the games. For instance, in Mega Man 2 on the NES you could pause the game in mid-jump and, when you un-paused, Mega would get a little boost to his jump; you could use this to extend his jumps a long way and it was super helpful. That's been retained in this game, but since it's basically the same Mega Man in all three games, you can now extend your jump across all the titles. It's a weird inclusion that shows the programmers at least paid attention to how Mega controlled, but then shrugged about keeping all the differences in the various iterations of the character.

While I can't confirm this since it doesn't seem like many people speed run these games, it doesn't seem like some of the bigger game-breaking glitches have been retained. Mega's accidental ability to zip through ceilings is likely gone so if you used these glitches to power your way through some sections you should scratch those off your list. Obviously this is an "issue" only hardcore players will notice -- casual scrubs, like me, likely won't care. It is yet another note that the programmers tried to "correct" somethings but it doesn't feel like the completely nailed the job all around. 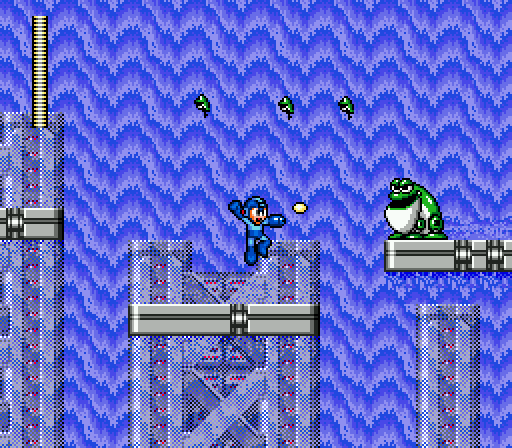 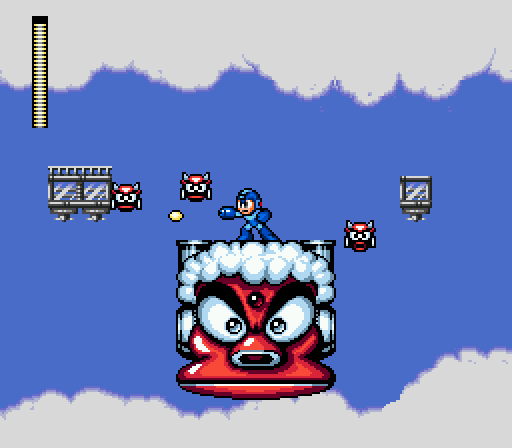 I say that because this game has a major issue that wasn't anywhere near as prevalent in the original titles: slow down. For whatever reason it seems like this game (which, remember, is essentially NES era titles with a higher color-count to its sprites and a second layer of parallax scrolling for the background) lags like crazy. You can be walking through a fairly sedate section of a level and Mega Man will turn to molasses. Any time you get a few enemies on screen, or some projectiles, or an explosion, it becomes a disco rave when everything slows down and stutters. Oddly the music doesn't lag, just the game play, so clearly the graphical power of the Genesis bogged down from this game. Which is weird because, again, these aren't complicated games.

I'm so confused why the team would release a game in this condition, one that will lag so bad from just normal play. The lagging issues are at their worst in the new content, too, meaning the programmers clearly knew about it and didn't think it was a big enough issue to fix (since they be bothered to balance the new content so it didn't bog the console).

On that front I do happen to like the concept of the new content (even if it suffers some of the worst slow down in the entire collection). After you beat the first three games a fourth title, "Wily Tower", unlocks. This is actually a two-part mini game where, in the first half, you have to fight three new Robot Masters: Buster Rod-G, Mega Water-S, and Hyper Storm-H. Besting these three doesn't actually net you new weapons to use in the back-half of the game, but that's not a problem because from the start of Wily Tower you can bring in eight weapon and three utility items from any of the three games. And once you've beaten the Robot Masters there's a whole new final fortress to scale. it's a solid addition to the package and adds an extra half hour or so to the overall experience.

Really, the only major gripe I have about Wily Tower (other than the lag) is that it really doesn't push the concept far enough in the experience. While I appreciate the ability to bring all the weapons from the games into a final title, I think it would be even cooler if you could take some weapons from one game and bring them back into another title. How much fun would it be if you can fight Ice Man with the Atomic Fire, or have a blade duel between Shadow Man and your Metal Blades? There are any number of ways a combined engine like this could be used to remix various elements of the first three games in the series (what about a randomizer that selects eight Robot Masters and four Wily stages to bust through?), but Wily Wars only scratches the surface. 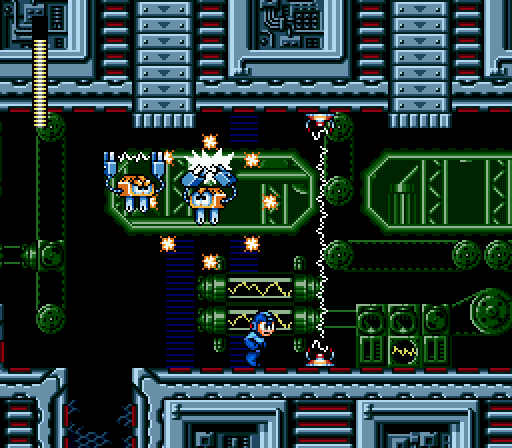 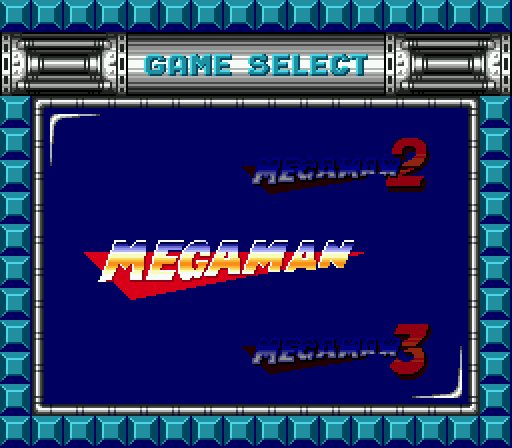 And, really, that's a complaint about the whole Mega Man experience. I know I've mentioned in the past how I'd love to see a 12-game (including Mega Man and Bass) collection that featured back-and-forth remixing of elements. Most of the games in the series are in an 8-bit style (and those that aren't have been "demade" by fans into that era), so a package like this with more cool features mixing together all the games in the series seems like a no-brainer. And yet the closest we've come is The Wily Wars.

In some ways I really like this collection. It's a decent little upgrade with some cool new ideas mixed in. Sadly it gets hobbled by a console that couldn't really handle what the programmers wanted to do. This is especially the case if you play the European PAL version which runs at 50 kHz as opposed the Japanese version at a faster 60KhZ. European players got a game that was slower overall ruining the zippy game play of the classic titles. The package, in so many ways, just doesn't quite come together.

By this point there are so many releases of the classic series you don't have to settle for this version. The Wily Wars is a title only the classic collectors, and hardcore Mega Man fans, need to play. Everyone else is better off with any other re-release of the games.