Well, we're closing in on the end of an era. While the retro Mega Man games will go on for another few titles (one more Game Boy iteration, plus revisits on the Sega Genesis and Sega Game Gear), Mega Man 6 is the last game released for the aging Nintendo Entertainment System. I'd like to say that this portion of the series goes out on a high note... sadly... 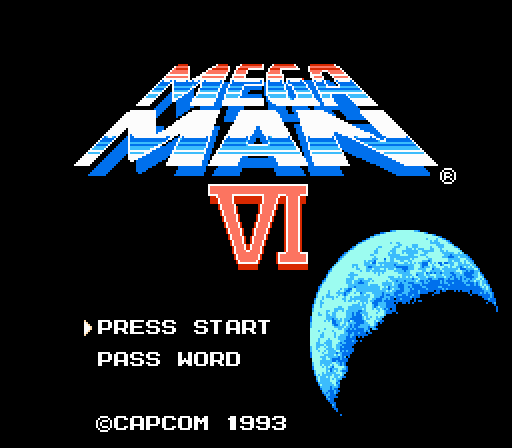 That's not to say Mega Man 6 is a bad game. It's certainly not. The problem is that it's a very safe game. Few things in the game are going to feel new, or special, with the game giving yet another iteration of the same old Mega Man formula we've already seen five times before on the NES. For the last outing you would hope for something more interesting, or more daring (especially with the Mega Man X series also coming out the same year, 1993, and doing different things with the Blue Bomber), but this NES game is just another in the line of standard Mega Man games.

The problems with the game really start almost from the beginning. In the intro cut-scene we meet Mr. X, a new robotics master that surely can't be Dr. Wily in disguise. At a robotics competition, Mr. X steals all the robots and sets them up in eight themed stages, all for Mega Man to have to come and fight them before fighting through Mr. X's fortress. Swap out Mr. X with Dr. Cossack or Protoman and it's the same formula we saw in the previous games in the series. Plus, really, no one playing the game even has a doubt this is Dr. Wily, so there's no need for the disguise or the attempt at subterfuge. The plot, in short, just doesn't work.

Following that, it just doesn't feel like the developers put any more care into the Robot Masters than they did with the story. Sure, some of the stages are interesting enough, like Flame Man's stage with its oil pits (that can get lit on fire to kill Mega Man) or Centaur Man's stage that features inverted water sections (to decent effect). Most of the stages, though, just feel like more of the same. There are very few new twists and cool iterations on the basic formula are in short supply.

Honestly, many sections of the game don't even really feel like a copy of a Mega Man game, as if the A-list talent behind the series was more focused on other projects (like the Mega Man X series), shunting development of this game off to the dregs of the department to slap something together until the next SNES game was ready. Everything feels fine but... just fine. Not great. Not spectacular like we expect from the best Mega Man games. 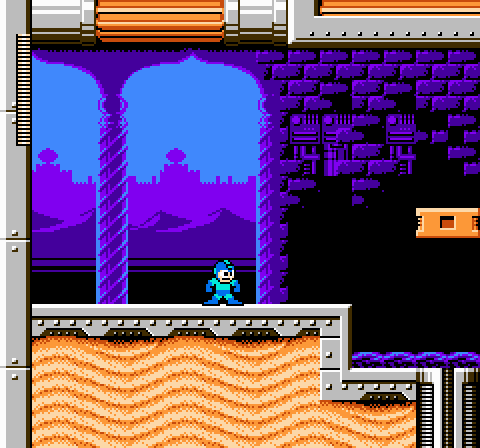 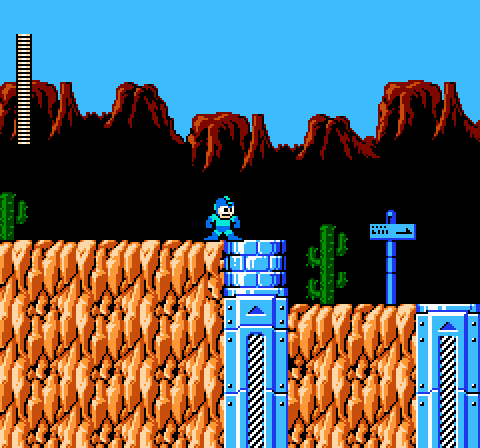 Compounding this problem is a set of Robot Masters that just feel so strange. The creations, from Centaur Man to Tomahawk Man, Yamato Man to Knight Man, feel like rejects from one of the many Disney games Capcom produced over the years. It's like the team behind Duck Tales had scraps of ideas for bosses and just shoved them at the Mega Man guys with a note saying, "maybe you can use these." Again, they aren't terrible bosses (well, okay, Wind Man and Plant Man are both pretty awful) but they lack that certain spark that holds them up as classics of the form.

There are winners, to be sure. I really do like Flame Man as he has the whole package. His stage is cool, his music is pretty awesome, and he has a solid fight that feels like a classic Mega Man brawl. He's the exception and not the rule though. More bosses like him (with their own killer stages as well) would certainly have injected more life into the game.

Life is certainly lacking from the game, especially once you reach the two Wily Castles (one for Mr. X and then the traditional Wily Castle beyond that). Neither of the castles are all that memorable, admittedly a problem many of the later Mega Man games have had. While there are some decent music tracks in the castles, the stages themselves are pretty rote. It's once again like the production team just didn't care that much about the back-half of the game, which sucks because the front half lacks care as well. It just never gels together.

Of course, this is exacerbated by a lackluster selection of weapons for the player to use. As with the bosses, and the stages, there are some winners in the set: Knight Crush and Yamato Spear both show a high level of utility coupled with awesome ammo. There just doesn't seem to be enough real interesting weapons to make the collection sing. There's nothing super powerful, like a Quick Boomerang or a Shadow Blade, nor any oddballs to make you laugh, like a Top Spin or a Charge Kick. The collection has the usual blade weapons, screen-clearers, and Bubble Lead-wannabes, but nothing better. 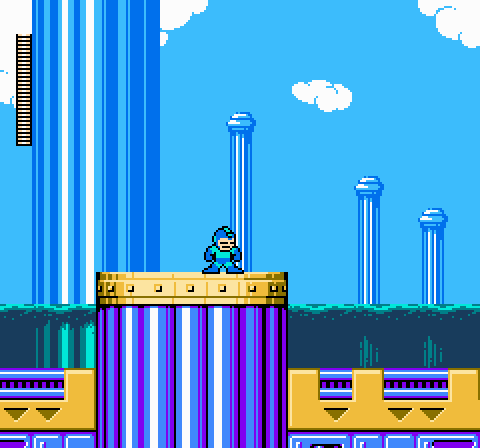 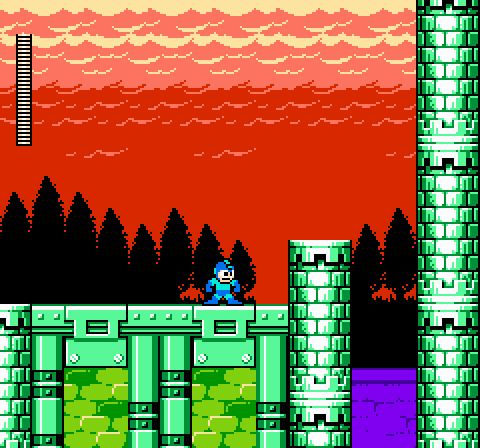 It sucks, too, because I get the feeling like the team wants to craft something interesting, but between time constraints and (maybe) split resources with all the other Mega Man-related properties coming out, they just couldn't bring the game together. Take, for instance, the split-paths some stages have. Depending on the path you take you'll fight one of two versions of four of the bosses (it's the same fight, just in different locations in the stage). Beat this alternate boss and you get one of four Beat letters (to unlock the blue bird). I like this idea in concept, the idea of special rewards for exploring the stage, but the game doesn't push the concept far enough to make it sing.

Imagine a version of the game where each of the eight Robot Masters had split paths. Take the safer course and you get the main Robot Master weapon, but explore the alternate path and you get not just Beat, but other upgrades like various Rush modes or the Energy Balancer. But to earn that you have to fight an alternate, much harder version of the boss, really making you work for those upgrades. That's a neat new twist on the basic Mega Man formula that still feels like a natural evolution of what they tried in this game.

We also have Rush, who instead of being a vehicle for Mega Man now works like armor upgrades, giving the Blue Bomber different powers. One is a super fist that breaks bricks while the other works like a jet pack, giving Mega Man swooping hover abilities for a short time. I like these two upgrades in concept (although I like the fact that every time you switch to them, the menu has to cycle through a transformation sequence that slows down the game play), but these two upgrades are too limited on their own. Maybe Mega should have been given a few extra things he could do, like swimming, or wall climbing. Admittedly, these ideas would appear in later games (like the X series and Mega Man 8) but they could have been done here with Rush to give the dog more utility.

Everything in Mega Man 6 feels like a missed opportunity. The game feels rushed, like the team had ideas but lacked the time and resources to implement them. Of course, the game had to come out when it did -- if it took any longer it would have missed the NES life-cycle completely. I just wish the game was better. It's a fine game when it could have been so much more, a middling effort in the series when we already have plenty of those. Mega Man 6 won't irritate you, it's not a bad game. You'll just leave it likely wishing it was better (if you remember it at all once the experience is complete). 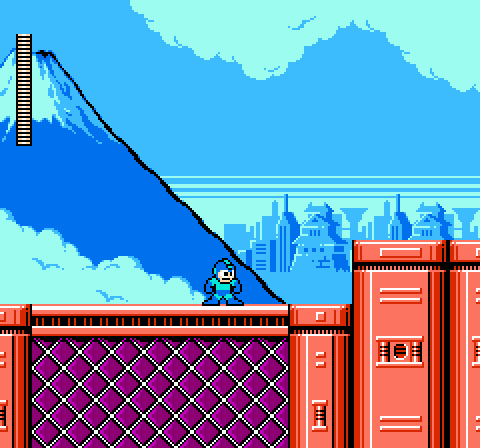 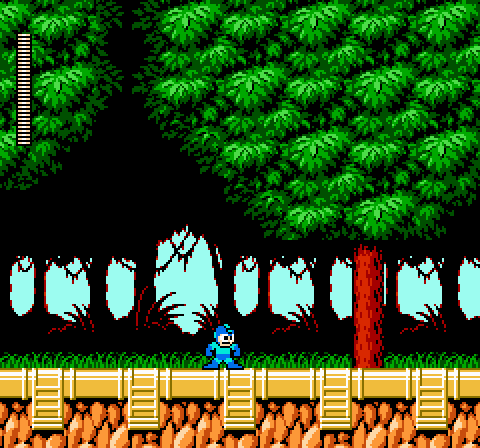