The joke that the game developer Capcom couldn't count higher than a given number originated back in the days of Street Fighter II. Although Capcom proved they understood how a number line functioned with the yearly, numbered releases of the Mega Man series, with the Street Fighter series, Capcom also proved that the number two was the most important number, and they weren't really interested in going higher. The joke itself started in various publications as "Capcom can't count higher than two." 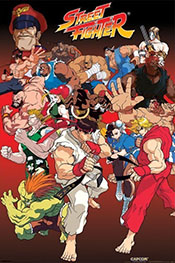 The series started, unassumingly enough, with the original Street Fighter, in which series protagonist, Ryu, has to battle through a fighting tournament. Although only a moderate success, the game was well received and eventually had the mother of all sequels, Street Fighter II. It was with Street Fighter II that Capcom proved themselves to be numerically challenged. Due to it being an arcade game first-and-foremost, various updates and iterations were released for the game. Many of these were eventually ported to home consoles, leaving many a collection with multiple versions of Street Fighter II sitting side-by-side.

Those looking forward to Street Fighter V have had less of a wait, although Capcom did give us plenty to hold us over until that release. There were four editions of Street Fighter IV, an two HD updates for Street Fighter II, and two more editions of the Marvel vs. Capcom series. But then, who knows when Capcom might have any interest in learning to count to six.

If you want to see Capcom run a series right into the ground from numerous, chronological remakes, look no further than the Mega Man series, as exemplified in the Mega Man Syndrome.