It's pretty commonly accepted knowledge that all video game-to-movie adaptations are bad (although, in fairness, the opposite generally holds true as well). Video games are, by their nature, interactive while movies are passive entertainment. When you take a video game and translate its story to film you've in essence taken out all the parts that make a video game special, rendering a two-hour cut-scene from an active media. It doesn't have to always be a failure, but most producers struggle to take what people liked about a video game and translate that into a movie that's at all good. 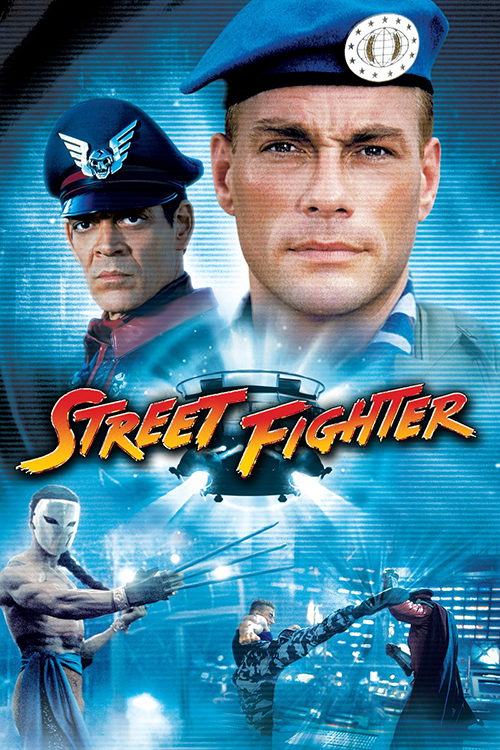 There are exceptions, of course -- the 1995 Mortal Kombat is stupid but watchable (which also holds true for the 2021 version, and the first Resident Evil had its charms -- but it wasn't until recently that and real decent video game movies came out. Movies like Sonic the Hedgehog and Detective Pikachu shows that you could make a good movie adaptation if care was put in, but most early films failed to do so.

You get the sense, going back and watching old video game adaptations that the producers expected that just slapping a name on a film and releasing whatever dreck they could would be good enough. It's the same thing that happened with old comic book movies, and aside from a few rare exceptions, most comic-to-film adaptations were dumb, losing sight of what made the heroes special. These "for kids" products were considered too immature for the adults in theaters, so things had to get changed to make them "palatable", and in the process things really got stupid.

In the history of all these video game-to-film works, though, there are few debacles bigger than Street Fighter from 1994 (I'd even go so far as to call this film the worst if it weren't for the 1993 Super Mario Bros. also lingering out there). This movie, often listed as one of the worst video game movies of all time, reportedly had such a bad production process, and wasted so much money, that it's hard to understand what the producers were even trying to do. It's a $30 Mil blunder that, on screen, looks like it was made for a tiny fraction of that. Most of the money when to the salaries for the stars, Van Damme and Julia, and its cocaine budget (not a joke as Van Damme admitted he was high on coke for most of the film) while the rest of the movie looks cheaper than anything else put out that year. It's just so awful.

And yet, would you believe this film was technically a success? It might have had a ballooned budget, and cost a ton to make (in 1994 terms), but it managed to pull in a tidy $99.4 Mil, will over three times its budget. In Hollywood math that makes it a success. But culturally its reputation held it back, and none of the people involved wanted anything to do with a sequel, so the proposed Street Fighter II (that's not a confusing name at all) never materialized. 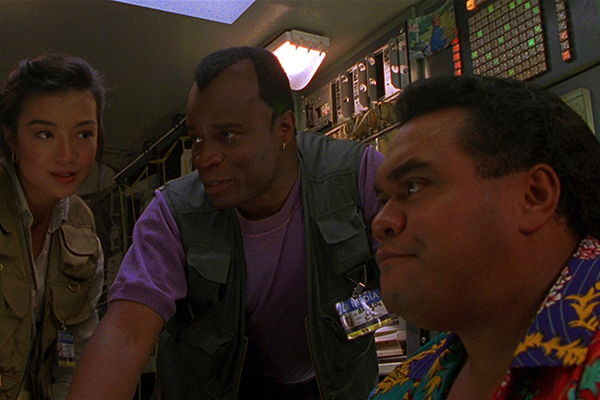 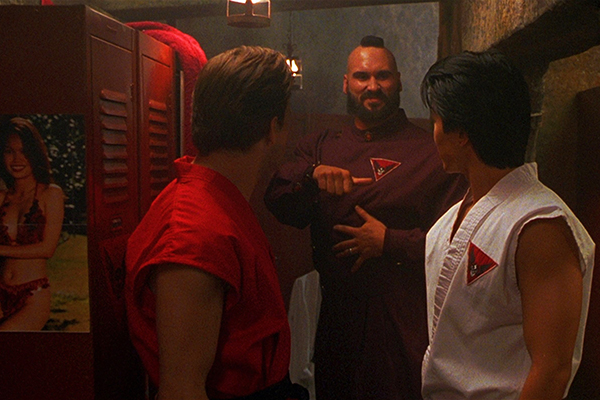 Now, for this site I've watched a lot of awful crap so I had to wonder, was the cultural reputation of this film really fair? Was it as bad as everyone said. I hadn't ever watched the movie before which meant I could go in blind and just try to enjoy what pleasures could be found without having anything spoiled. And, you know, I have to admit that for a good stretch of the film it really isn't as bad as everyone makes it out to be. Oh there are flaws -- the very Belgian Jean Claude Van Damme is miscast as the very American Guile, the film strains any time it tries to do any action, and for a film called "Street Fighter" there's basically no street fighting -- but the first hour of the film is actually decently watchable. Not great, but breezy and it moves at a good clip.

The film is about the conflict between evil warlord M. Bison (the fabulous Raul Julia, too good for this movie especially considering it was his last) and the forces of the Allied Nations (read: United Nations) led by Colonel Guile. Bison has taken over the nation of Shadaloo and the A.N. is trying, desperately, to stop him. After Bison takes a group of people hostage, threatening to kill them unless the world pays him $20 Bil, Guile and his various forces -- Sgts. Cammy (Kylie Minogue which... really?) and T. Hawk (Gregg Rainwater), reporter Chun-Li (Ming-Na Wen, who deserved better) and her crew of Balrog (Grand L. Bush) and Honda (Peter Tuiasosopo), and street toughs Ken (Damian Chapa) and Ryu (Byron Mann) -- try, one way or another, to save the hostages and bring the warlord down, whatever it takes.

The early stretches of the film aren't great, but they aren't bad. The movie actually does a decent job of setting up the various characters, giving them enough screen time to feel fleshed out, all before setting them on their path to M. Bison. While none of it is high drama it works in context. The acting here is maybe a slight bit better than Mortal Kombat a year later, so there's stuff that works here. Up until the big last act the film actually feels like it's under control and moving along.

It's in the last act, though, that the wheels come off this vehicle. The action finally kicks in here and, wow, is it terribly directed. You get the vibe that Steven E. de Souza and his production team didn't really know how to frame and shoot martial arts action because what's on display here is beyond shoddy. Most of the time actors throw punches and kicks at the camera (not each other) and then other actors react. It's pretty clearly all done in one-two shots without any impact or deftness. This is probably the worst action I've ever seen in a film, which is a real problem for a movie based on a series that's all about its action. Get everything else wrong that you want, but in a martial arts movie the martial arts need to be good. 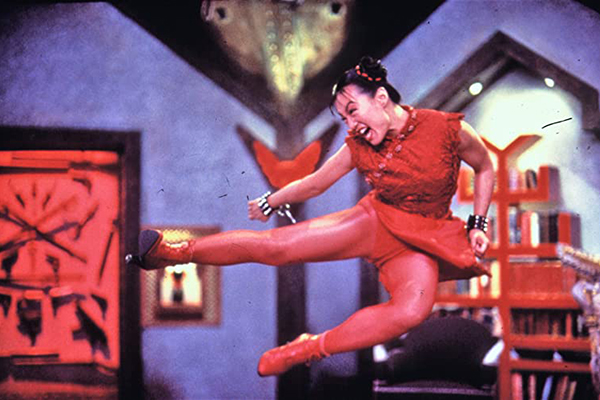 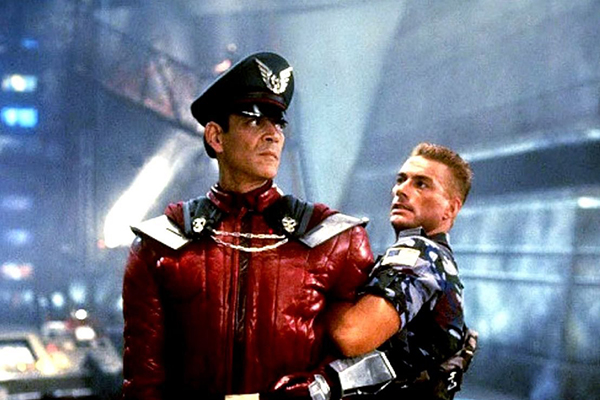 The film also gets let down by its excess. The last act gets cheesy, and then corny, and they just plain stupid and the film desperately tries to work in every reference from the video game it can. Chun-Li getting put into a game-appropriate costume (in the wrong color mind you, but still) was one thing. But as each character somehow gets put into their costumes, various special moves are awkwardly worked in, and then M. Bison starts to fly, you realize the people working on this film really had no clue how to treat this material well. It's awful.

Don't get me wrong, I can appreciate the team trying to make a subject-matter appropriate film, but that's not what we had here. While not terribly grounded, the first two acts of the movie at least felt like they took place in some semblance of the real world. That all goes out the window in the last act, with all its bombast and video game references. Really, once a very Incredible Hulk 1970s Blanka appears you know the film has gone completely Loony Tunes.

This absolutely feels like a movie created by people that, one, didn't know how to work with the source material and, two, thought it was too silly to use, so they tried their darnedest to shove it all in at the end when no one might be looking. This leads to a tonally dissonant film, from live-action war story to live-action cartoon, and it doesn't work at all. Two-thirds of this movie is okay, even watchable. The last act, where it all has to come together, is where the film dies, and it's a slow, painful, very hard to watch death.

Going in and wondering if this film could be as bad as everyone says, I was almost fooled into thinking people had to have it wrong. That last act though, man, it just betrays the whole film. This movie is exactly as bad its reputation, an epic blunder that never should have seen the light of day. But when you spend $30 Mil on a movie this bad you have to release it, and now, for all time, we'll have this (and Super Mario Bros.) to look at and say, "yeah, this is how not to do a video game adaptation." Thankfully it does seem like Hollywood, in recent years, has finally gotten that message.