Wow, 1995's Mortal Kombat is a bad movie. I think everyone out there knows its a bad movie, but most of us hold a soft place in our heart for the film because we all saw it when we were kids or adolescents and we thought the characters were all so cool as they kicked and punched their way through a tournament to save our world. None of us have any illusions that it was actually "good", even if it's hailed as one of the best video game adaptations out there (which should give you an idea of the low bar for that metric), but going back and watching the film I had to admit: it's just bad. 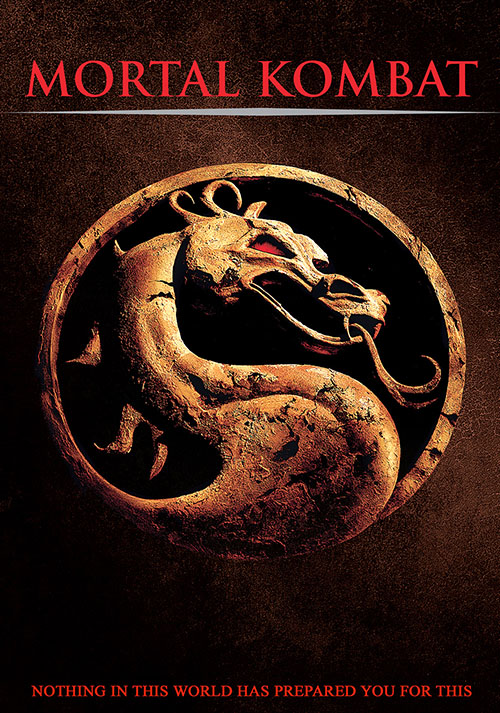 The film was always cheesy. Hell, the video games its based on are unabashedly cheesy. The charm of the video games was primarily that you could beat the snot out of your opponents and it was bloody and gory and super violent. Mortal Kombat rode a wave of pearl clutching to become one o the most successful fighting games on its era, and the franchise was once held up against Street Fighter when it came to arcade combat brawlers. But no one ever thought that was the Mortal Kombat series was high art, and the film is no different. In fact, I'd argue it's worse as it doesn't even have the fun blood and guts that made the games so pruriently fun (it being PG-13 rated).

The movie does stick surprisingly close to the video games for what little plot there is. Three champions of Earth -- Robin Shou as Liu Kang, Linden Ashby as Johnny Cage, and Bridgette Wilson as Sonya Blade -- are taken by boat to a forbidden island where they have to fight in a tournament called, of course, "Mortal Kombat". As they quickly learn, the tournament will decide the fate of Earth, whether it remains a dimension free to rule itself or becomes yet another conquered territory for the Emperor. If they lose, it'll be Earth's tenth loss in a row which makes it forfeit to the Emperor and his minions of Outworld.

Standing against the "kombatants" are a rogues gallery of bad guys including the criminal boss Kano (Trevor Goddard), magical ninjas Scorpion (Chris Casamassa), Sub-Zero (Francois Petit), and Reptile (Keith Cooke), multi-armed brawler Goro (performed by Tom Woodruff, Jr., voiced by Kevin Michael Richardson), and the Emperor's sorcerer, Shang Tsung (Cary-Hiroyuki Tagawa). Liu wants revenge against Shang Tsung for the death of his brother (his brother's soul having been taken by the evil sorcerer) while Sonya is out to get the criminal Kano (who killed her partner). Meanwhile Johnny is just there to prove he's one of the best fighters in the world (because not everyone has some special reason to fight).

When you're watching the film you have to give the production team credit: the fidelity to the source material is there, and it's clear the people behind this production wanted to get things right. The look of the characters is on point, their stories and backgrounds are (more or less) correct, and every character gets to do one of their cool moves eventually, showing that the actually can be just as cool as their video game counterparts. This movie looks the part, that's for sure, which went a long way on selling the film to fans. 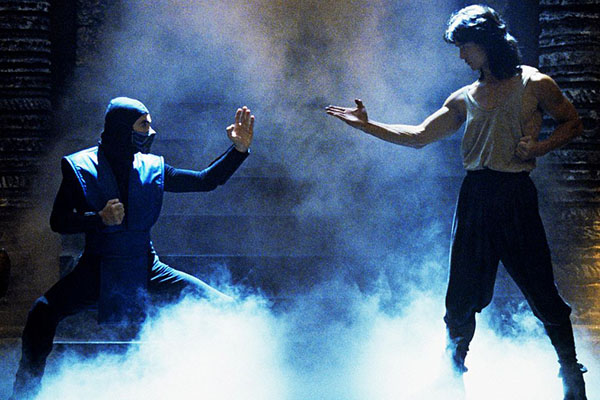 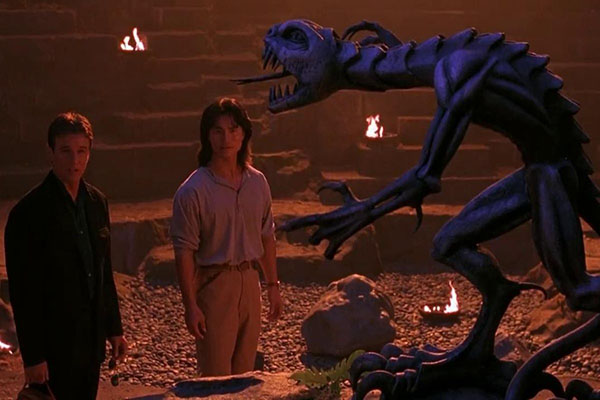 That said, 25 years removed and with the rose-tinted glasses taken away, we have to admit that this movie kind of sucks now. For starters, while there's a lot of setup for the film, with everyone getting a reason to be in the tournament and a goal set in place, the middle of the film is just a formless set of fights. Nothing is actually proven for any of the characters as they fight their way up the ranks of the tournament, and the fighting doesn't really resolve any of their stories. Hell, Sonya actually fights, and kills, Kano and it's a moment that goes by so fast it doesn't even land. The fighting is there because it's in the game but movie doesn't actually use it to illustrate anything important about the characters.

It doesn't help that the film is really one hero, Liu, and two assistants, Sonya and Johnny. They're all in every scene together, essentially, but only Liu has a real story that we revisit over and over again, his quest for revenge. His is the strongest motivation to be in the tournament, and Shang Tsung brings up the brother's death more than once. When he has his fight against Tsung, this is a fight that actually matters, that develops Liu as a character and finally gives him the catharsis he needs. Of course it comes at the very end of the film, after he's already fought a ton of dudes that didn't actually matter (and were just there to give us our required action beats), so that's one (maybe one-and-a-half) fights total that matter and a whole lot of filler.

I guess at least the actors are all having fun. This is a charismatic bunch and they have great chemistry together. While they might not be the most developed group of characters, the three leads do a lot to sell the cheesy material and make it watchable. You can actually see, in the film, where the material is given to someone that doesn't know how to sell it as Talisa Soto, who plays the Emperor's adopted daughter Kitana, seems absolutely lost in the dumb dialogue she has to sell. She seems too stiff, too uninvested, to actually give us a performance that works. Her character, who should be a love interest to Liu, is just there to move the plot forward.

No one is having a better time in the film, though, than Tagawa. His Shang Tsung is a scene stealing, scenery chewing delight. Every time he's on screen the hamminess cranks up way past eleven. Every line reading is a wide-mouthed, over delivered delight. He clearly saw the games the film was based on, and figured he could step up his own personal game to match the overblown style. This is one of the most balls-out stupidly over-the-top performances and I loved every second Shang Tsung was on screen. 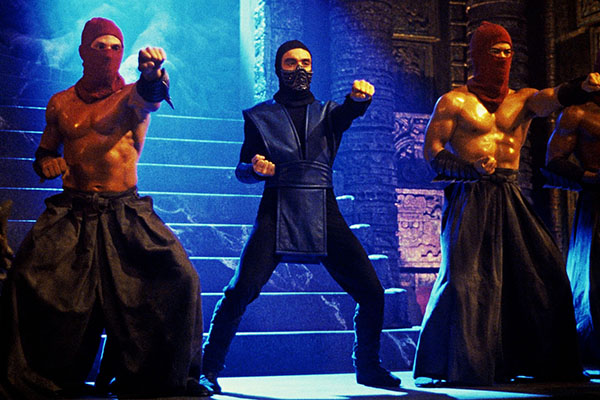 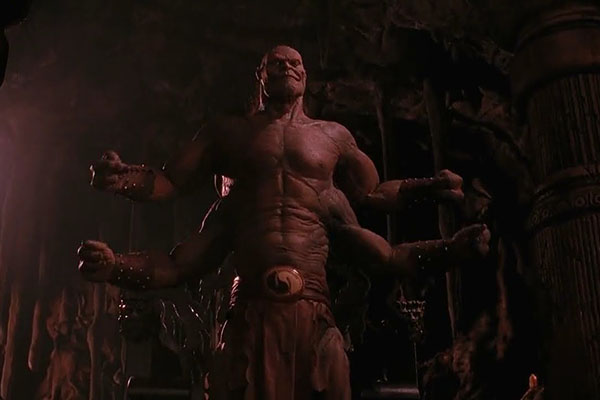 But that still doesn't make it good. I've only seen this film a couple of times, and while I enjoyed it as a kid, even then it wasn't something I had to see over and over again. Coming back to it now I was hopeful it would hold up as a stupid but fun good time. It was certainly stupid but the fun was lacking. By the mid point I had to fight not to check out, and even then I wasn't exactly roused by the big fights or the climatic final battle that caps the movie. The film ran out of steam long before I lost patience.

I can understand why we all liked this film when we were kids: it plays on the same kind of cheesy, martial arts vibe of the old Teenage Mutant Ninja TurtlesOriginally dreamed up as a parody of Marvel's Daredevil comics (going so far as to basically reproduce to opening shots of that comic's hero gaining his powers), the Teenage Mutant Ninja Turtles not only launched a sudden boom of anthropomorphic fighting animal comics but have, themselves, starred in multiple comics series, TV shows, and movies. films, and kids of that era would eat up anything that had sassy characters and kung fu fighting. Grown up, though, I expect more from my actors, from the story, and especially from the martial arts films I watch, and this film just doesn't deliver on any fronts. It hasn't aged well at all, and that makes me a little sad.

Not as sad as the sequel is about to make us all, though. If you thought Mortal Kombat was bad, it's about to get a whole lot worse.\