The War for Earth Is On

So I know that the Mortal KombatFunctioning almost like counter programming against the cleaner, brighter, and friendlier fighting games of the era, Mortal Kombat added violence, gore, and bruality in equal measure, creating a fighing game every kid wanted to play (and every adult wanted out of their house). series has a lot of games (eleven so far, not counting re-releases, spin-offs, and expanded universe titles) but, honestly, does it really have much story to it? Sure, there are dozens (hundreds even) of characters in the franchise, and they all have their little bios about them (like action figure blister cards) along with in-game stories they follow in their tournament modes, but how much of the story actually matters? Is it fleshed out? Is it detailed? I've played through the early games and all I ever got was, "emperor bad, go break his neck," and, frankly, the movies that have come out haven't exactly added much more to that from there. 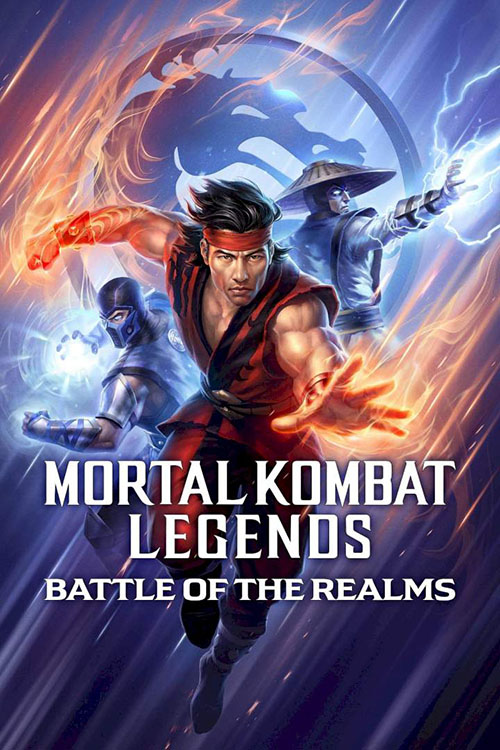 Bear in mind that at this point we have three different attempts at theatrical-length films, and all of them tell the exact same story. Mortal Kombat from 1995 showed the story of Liu Kang, Sonya Blade, and Johnny Cage teaming up at the Mortal Kombat tournament to protect the Earth and stop the evil Emperor of Outland from taking over the Earth (because fighting tournaments decide all extra-dimensional governmental decisions). And then the animated film from 2020, Mortal Kombat Legends: Scorpion's Revenge gave us the same story while the 2021 live-action Mortal Kombat gave us, well, the exact same story. Sure, Scorpion was more prevalent in those films (because he's a bigger player int he games now), but the bones (pun intended) of the tales are the same.

This is a trend that already had me questioning just how much the creators of the franchise could do with the material given but now it's even more obvious with the sequels: we have two so far, both Mortal Kombat: Annihilation in 1997 and the newly animated Mortal Kombat Legends: Battle for the Realms also tell the same story: the Emperor is a sore loser so he looks at invading Earth anyway, and then Mortal Kombat happens again. And, yes, some details are different, but I have to wonder if there's more that could have been done with these movies than just doing the same couple of stories over and over and over again?

Conceptually I think the Mortal Kombat franchise is interesting. You have really cool looking ninjas and kung-fu masters and princesses all battling against beasts and monsters, tearing at each other in gory fashion. It's all the promise of martial arts fantasy writ large with blood and guts. The franchise really hits well at that lizard brain part of you that delights in seeing gory action played out on the big screen so I get the appeal of watching these movies. My issue comes from the fact that we still have yet to get new ideas in these films despite five attempts so far.

The most original film we had was the 2021 live-action version which at least spent a lot of time fleshing out Scorpion (and his descendant), shifting the focal point away from the normal heroes to someone new. It still told the same story but at least it was from a slightly different perspective. Battle for the Realms, though, doesn't really manage that at all. It picks up once the war has started but it's the same characters doing the same things against the same Emperor that we've already suffered through multiple times before. Sure, Johnny Cage lives longer in this sequel than he did before, but that's hardly a big change worth crowing about. 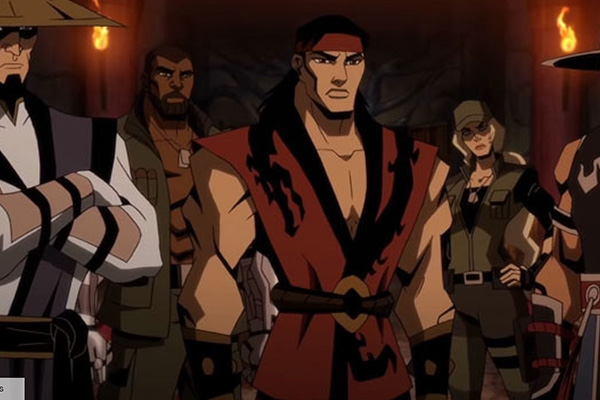 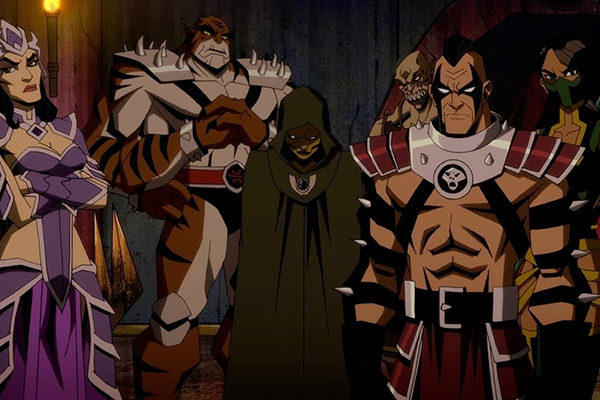 There are elements of this film that do show the creators were trying to branch out. They continue the story of Shinnok (Robin Atkin Downes), a minor villain introduced in the previous animated film, who has designs on taking over all the realms. This does allow the film to cut away from the main story of the Emperor just doing Emperor things, but in general it's not really a great B-plot. For one, if you don't know who Shinnok is (which I don't since I stopped playing these games years ago) the movies do nothing to really flesh out his character in any meaningful way. He's a generic bad guy and gets treated as such.

By the same measure there's some kerfuffle about the whole horde of ninjas (of which Scorpion and Sub-Zero are members) turning their trained warriors into cybernetic ninja. While this should be scary and dramatic, the whole concept is glossed past for action and any chance for the character moments (or the body horror, at that) to sink in is quickly lost as the film moves on to some other scene. Things that should be cool, basically, aren't given the weight and development they deserve.

I'm sure a lot of that had to so with the fact that Warners adapted this movie like they adapt all their DC animate films: cheaply, and to fit a very specific run-time. Battle for the Realms is an exact 80 minutes (with credits), a very clearly engineered number that lets the film play on certain channels, if needed, while fitting the right spot to have commercials every few minutes and still end at a reasonable two hours. But the run-time means that character development has to be set aside so the film can rush from one end of the story to the other. It leaves the movie feeling slight, despite its theatrical (or very nearly) length just due to how many characters, good and bad, are shoved into the film.

That's part of the reason so many of the returning characters have so little to do. Johnny (Joel McHale) and Sonya (Jennifer Carpenter) are basically in the same spot here that they were in the previous movie, with Johnny mooning after her while she once again ignores him. I thought we were past this with these characters, but apparently not. Liu Kang spends the whole film trying to figure out if he's powerful enough to take on the Emperor which, again, was his story the last time. The only one given anything new to do is Scorpion who has to go on a quest to stop Shinnok from getting some baubles he needs to become a "higher being" (a quest, mind you, he fails at), but that actually leaves him with even less characters development as he just runs around, basically doing very little (in stylish fashion). 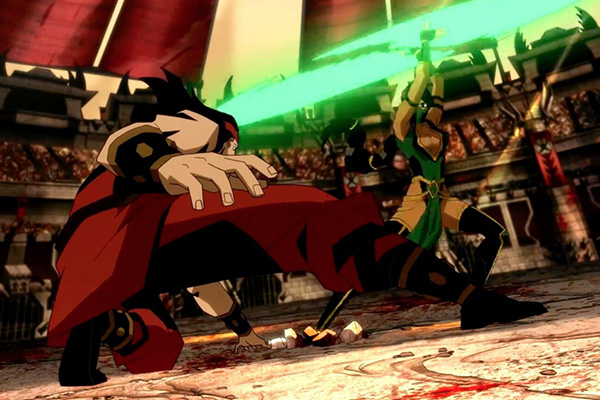 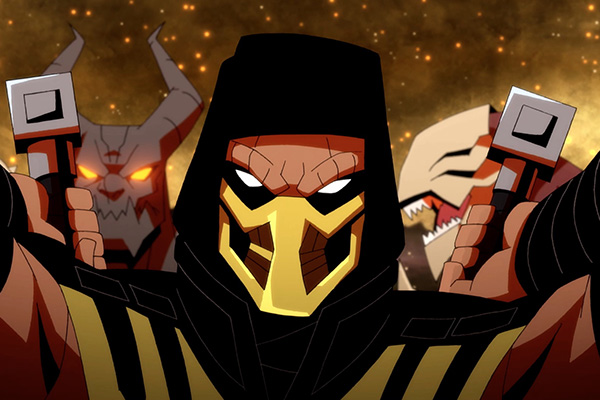 The parts that do work about the film are what worked the previous time: the fighting and the gore. This is a bloody film (for an animated movie) and it has a lot of fun with dismembering, shattered bones, and buckets of blood. In that regard, at least, the film manages to nail the proper Mortal Kombat aesthetic. There's plenty of action, and a number of good fight scenes (especially some of the battles in the Mortal Kombat arena), but it's all in service to a story that really doesn't do much or go anywhere.

In short, Mortal Kombat Legends: Battle for the Realms is pretty but very shallow. It's a sequel cranked out to capitalizing on the fact that the previous movie actually did well on home video, but it doesn't really have anything to say or do. It hangs around, making people fight, and then it ends with the promise that maybe, just maybe, there's more gore on the horizon, but that's the only promise it can really make. The games have done the same things and been successful for decades now, but something tells me this lackluster sequel isn't going to produce yet more adventures to come.

If it does, though, at least we might finally get an original story for once. There's, what, at least eight more games to adapt. Something in there has to be different from what we've seen now five times before.