The Scorpion Is Your Friend

Does Mortal Kombat have more than one story to tell? I ask that because having now sat through three different iterations of MK on screen -- Mortal Kombat 1995, Mortal Kombat 2021, and now Mortal Kombat Legends: Scorpion's Revenge -- all I'm getting is the same story of the Defenders of Earth Realm having to win the 10th round of Mortal Kombat lest they get taken over by Outworld. Three times now. 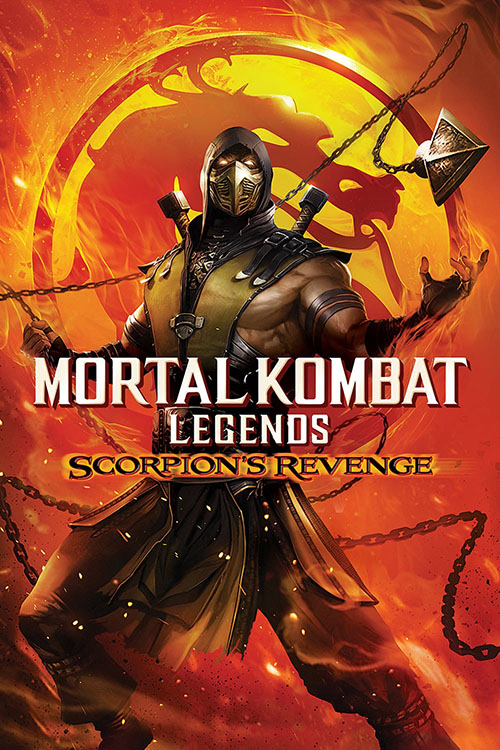 This particular film, an animated version of the story, feels like a blend of the first film in the series and the most recent reboot. It has the three heroes from the 1995 film -- Jennifer Carpenter's Sonya Blade, Jordan Rodrigue's Liu Kang, and Joel McHale's Johnny Cage -- dealing with the tournament and battling their way to Goro and Shang Tsung all while we have Scorpion (Patrick Seitz) on a quest for revenge against the man that originally killed him, Sub-Zero (Steve Blum) that feels like a dry run of the plot from the 2021 movie. It's a bit of a mish-mash that, frankly, doesn't work all that well and, worse, completely falls apart at the end of the film.

Like the 2021 movie, this film opens with its focus solely on Scorpion (or, the man he was before he became the undead fire ninja, Satoshi Hasashi). He's out wandering the farms around his village with his son when the sounds of battle can be heard from his home. They go running only to find blue-cloaked ninjas all over them place, there to kill him and everyone in his clan. Try as he might (and he does, in spectacularly gory fashion), Satoshi isn't able to save his people, or his family, or himself, and the leader of the blue clan, Sub-Zero, kills them all. This sends Satoshi down to the Netherrealm to be tortured for all eternity. However, he breaks free, kills all the demons he finds, and confronts the leader of the realm, Shinnok (Robin Atkin Downes), who makes a deal with the ninja: go to Earthrealm, get a magical key, and bring it back and the sorcerer will bring back Scorpion's family. Satoshi accepts.

Meanwhile, Lord Raiden (Dave B. Mitchell) has been working to gather the forces of Earth to defend it in the upcoming tournament. His prize student, Liu Kang, has been training for years for this, but Liu will be joined by special forces operative Sonya Blade and blow-hard action actor Johnny Cage. Together the three will be Earth's last line of defense in the tournament because, if they lose, then the Earth is doomed to be taken over by Outworld. It's Earth's last chance and these warriors are all we've got.

So yeah, the basics of this story are the same as they've ever been. It's the same story we saw in the original game, and all the various reboots that have happened over the years. That's my first issue with this tale as something called "Scorpion's Revenge" would, you'd think, have more to do with Scorpion than the usual Earthrealm bullshit that seems to always be the focus of this series. You could allude to things going on with Earth Realm, but Scorpion, frankly, isn't the star of his own picture. 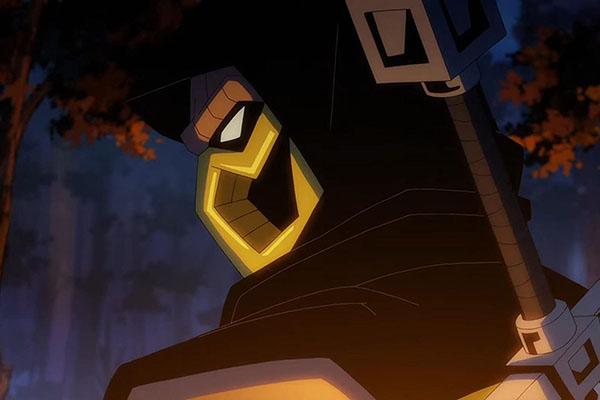 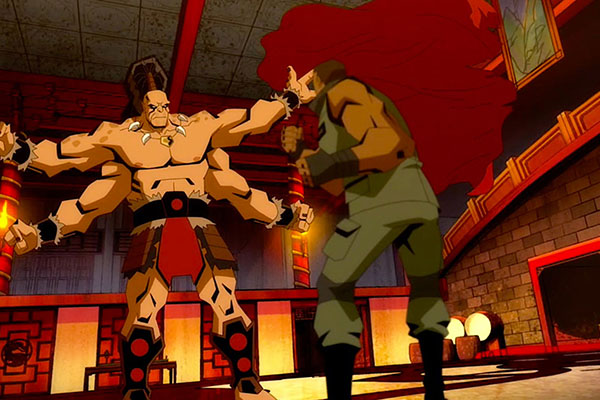 Yes, the opening sequence of the film is all about Scorpion -- his life, his family, his quest for revenge -- but the whole middle section of the film, and most of the last act, focuses on Liu, Sonya, and Johnny. Don't get me wrong, the film handles them well enough, but there really isn't any new material here, not enough to justify yet another version of this same exact story (especially with another new take on it coming a year later in theaters). If this film could have focused solely on Scorpion that would have been something. It certainly would have at least been something different, that's for sure.

What's funny is that to balance out this old material made "new" again the film tries to insert a bunch of gore and cussing that wasn't in the previous films in the series. Certainly it makes the film feel more in line with the video game series, which has been a massively gory affair for years (especially in the later reboot series). That said, the film goes to the violence well so much -- all the blood, the gore, the viscera, and broken bones and x-ray cams -- that it actually becomes numbing. At a certainly point the gore stopped feeling gleeful and started becoming perfunctory. Considering how much fun I had with the gore in the 2021 film, the fact that I got bored of it here surprised me.

The film also struggles to make the villains interesting, and that's also due to the fact that the focus of this film is so divided. Scorpion has Sub-Zero to hate, but Sub-Zero vanishes from this movie until the climax of the film. Shang Tsung is the nominal leader of the tournament but he's hardly in it at all and he gets absolutely no development (nor is he scenery chewing enough to carry it on performance alone). And then Shinnok, who is revealed to be the true mastermind of everything, is a one-note character given way more credit than he's worth. If any one of these characters had been the focus of the film maybe they would have had the development to matter, but having all three vying for focus hurts the film drastically.

And let's focus on Shinnok for a second here. He's revealed to be the big bad at the end of the film when he shows that he pretended to be Sub-Zero so he could make the blue ninja clan fight the yellow ninja clan. This was all so Satoshi would die, get sent to Netherrealm, escape his torture from demons, fight his way to Shinnok, and then agree to do Shinnok's bidding. That's such a horribly convoluted plan it boggles my mind. The twist was so stupid that my brain simply couldn't accept it and I simply ignored it because it didn't make any sense within the confines of the previous hour of film. Like, that change does nothing for any of the conflicts, resolves nothing and helps absolutely none of our protagonists grow in any real way. It's just there so Scorpion can fight Shinnok. It's bad writing. 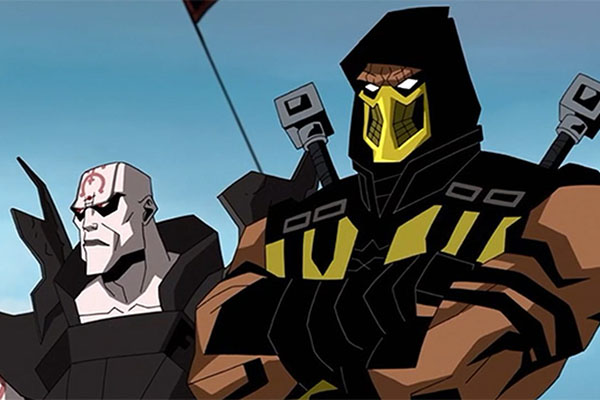 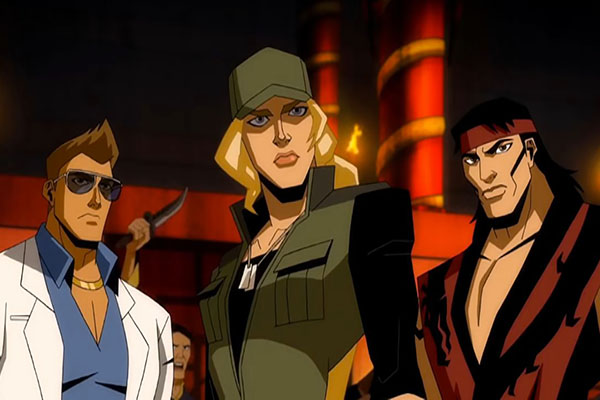 Frankly, the only character I actually did like was Johnny Cage. He's written as the comic relief, which isn't that far off from his role in the 1995 film. Plus, voice with aplomb by Joel McHale who has made a career out of playing full-of-himself blow-hards. This was the perfect character for McHale and he does it so well. Johnny may not be a hero, and some fans may have an issue with this depiction of him -- whiny, fame-hungry, a little cowardly -- but I enjoyed the hell out of it.

The film is perfectly acceptable when it comes to action, gore, animation, and basic voice acting. It's just that the story has so many issues, the pacing so many slow points within it, that it's hard to care about anything going on. It's fine to watch to kill and hour-and-a-half, but it's not a film I will likely ever go back and watch again. On the grand scale of Mortal Kombat adaptations it rates somewhat higher than Mortal Kombat: Annihilation, and that's a terrible movie.