The Earth Went Right In the Crapper

After watching the first Mortal Kombat I performed just a bit of research to find out just how the films went from that 1990s bit of stupid cheese to the turd-like miscalculation that was Mortal Kombat: Annihilation. I had to know because I don't think I've seen very many franchises manage to tank their good will so bad in the span of two films that they essentially had to take 25 years off before they were allowed to ever try again. That's a massive failure and I had to know why. 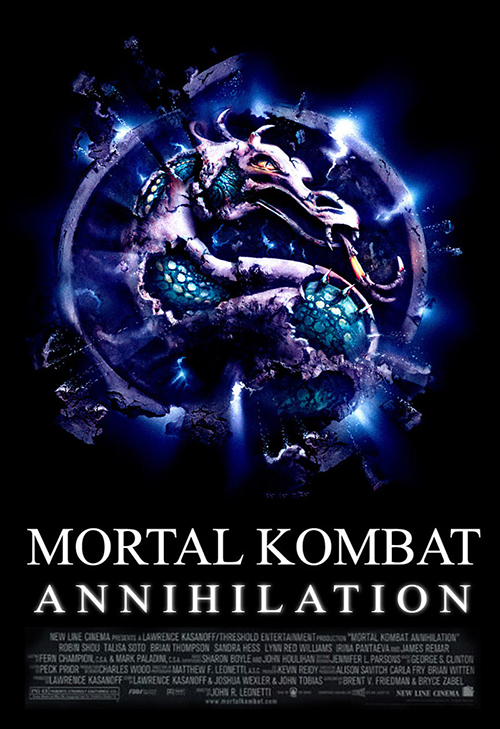 The film series was the brain child of Lawrence Kasanoff. The producer saw the games that had come out and thought, "I can make this into a media franchise!" His goal wasn't just movies but also a TV show, a touring production, and maybe even theme park rides eventually. He threw enough money at Midway to purchase the rights to the series for all his ambitious plans and then went about setting up his media empire. As noted, the first Mortal Kombat film was a hit, bringing in a tidy $124 Mil against an $18 Mil budget, and that helps Kasanoff put the rest of his plans in motion.

There was the animated series, Mortal Kombat: Defenders of the Realm, the live-action Mortal Kombat: Conquest (which actually came out after this film, showing that Annihilation didn't completely "annihilate" the franchise in one fell swoop, although it did come close), and a live touring show with the production values to rival American Gladiators (in other words, it looked like ass). All of these shows, it should be noted, sucked, making the 1995 film seem like quite the fluke. The master class in fuck-ups, though, was certainly Annihilation.

Bear in mind that the first film did well enough that the sequel saw an increased budget to help realize the more ambitious vision of the producer. Given $30 Mil to make a sequel based (mostly) on the story of Ultimate Mortal Kombat 3, the film still somehow manages to squander all that money to make a film that looks cheaper, and generally worse, than the first film. Kasanoff went on record saying he wanted the sequel to be "three times bigger" than the first film, in every way, but considering the bad decisions behind the scenes, the only thing the producer managed was to make a film three times worse than the original.

The first issue was casting. For whatever reason the producer didn't want to pay increased salaries for all the stars of the first film, assuming that it was the characters (and not the actors) that were the draw. This ignores the fact, of course, that most of those actors trained for their roles and put in time and effort to become the characters. For fans of the first film, the characters were supposed to look, and act, like the people we expected, but the producer didn't want to pay their (reasonable) demands for increased salary. That's why several characters were recast -- James Remar as Raiden, Sandra Hess as Sonya Blade, Lynn 'Red' Williams as Jax -- while Chris Conrad's Johnny Cage was killed off in the opening scene. The only two stars that returned for their original roles were Robin Shou as Liu Kang and Talisa Soto as Kitana. 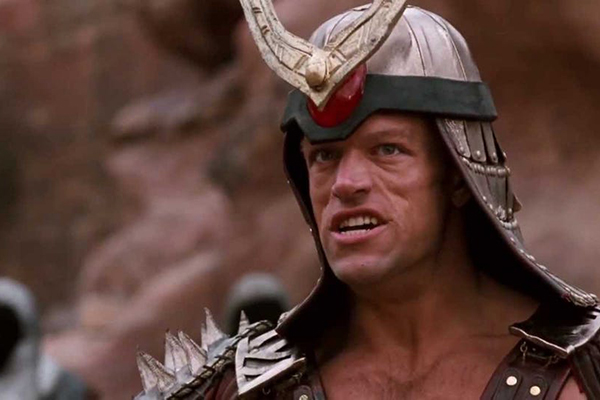 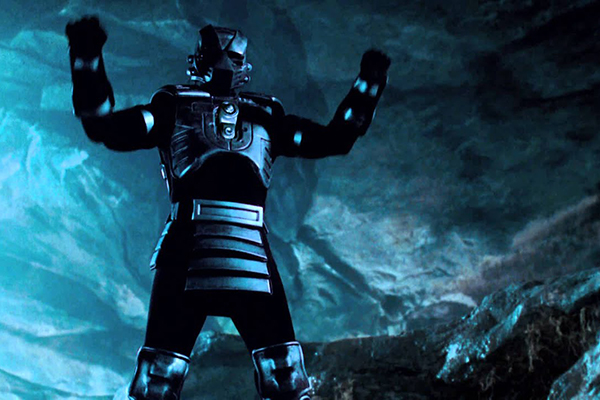 This decision seems especially baffling considering just how terrible the acting is in this film. While the actors from the first film weren't going to win any awards, they had an easy chemistry with each other and it helped to elevate the material. Some actors, like James Remar, and generally decent here, but over all the new actors and actresses just seem lost in the roles, spouting off stupid material without any heart or emotion. And that doesn't even get to many of the actors that are just bad, like Brian Thompson as Shao Kahn, Musetta Vander as Sindel, Irina Pantaeva as Jade, and, yes, Soto's Kitana (seriously, the actress just seems lost in every scene, likes she's a John Travolta meme, stumbling around without a clue what she's doing).

It certainly doesn't help that the story doesn't bother actually telling, well, a story. Where the first film slowly eased us into the concept of the tournament, letting us get to know the characters, establishing their back-story (along with the stories of the villains) while keeping the number of real characters on screen to a minimum to reduce clutter, this sequel prioritizes putting in as many characters as it can without explaining any of them. Various fighters from the games pop up, spout a couple of lines, and then disappear without any context or reason. "I'm here because I was in the game" seems to be the raison d'etre for every inclusion in the movie.

If, as a fan of the games, all you wanted to see was the entire roster from Mortal Kombat 3 rendered in the flesh, this film does at last deliver on that front. You'll get appearances from all the previous mentioned characters along with Shinnok, Motaro, Sheeva, Nightwolf, Ermac, Rain, Smoke, Cyrax, Scorpion, Noob Saibot, Baraka, Mileena, and Sub-Zero. What do any of these characters do? Fight a little and then vanish completely. It gives the film the feeling of being just a conveyor belt for (poorly directed) action sequences without any connective tissue. Things happen, then characters vanish, and we move on to the next random character attack, and that's the whole of the plot.

I'm not going to say the first film was great with all its characters, or its story -- hell, I outed myself in that review calling the film "bad" -- but in comparison that film is high art in comparison to this film, as it does everything better. Hell, Annihilation can't even get its one basic function right: it's bad at action. The action is filmed and edited in such a way that you barely see most of what the characters are doing (probably to cover for a cast of lead actors hired because they were cheap and not because they could fight), leaving every action sequences feeling messy and disjointed. That is, when the fights actually last for more than a few seconds instead of "character appears, gets punched twice, then dies" which happens all too frequently here. 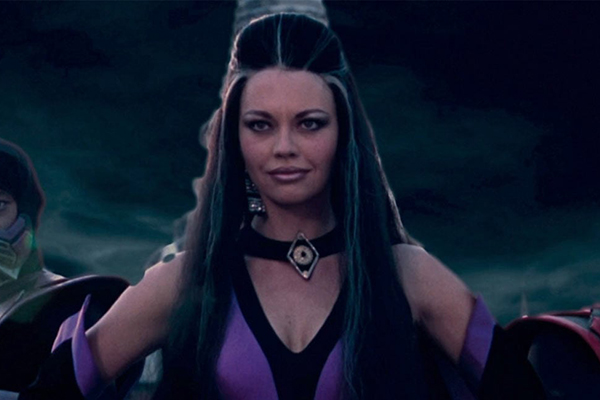 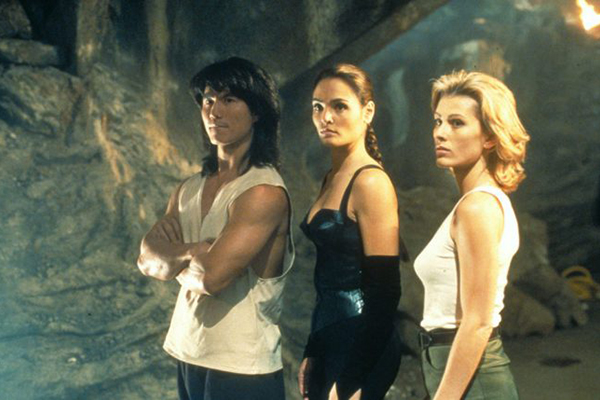 Oh, and if you wanted the film to make a big deal about the cheese "Animality" moves that were added into the game sequels, the film has that too, for no reason and with little explanation. Our bad Native American stereotype character shows up once to explain it, telling Liu he has to defeat three challenges to gain the power to defeat the Emperor (note, Liu never does these challenges), and then at the end Liu turns into a dragon (as does the emperor) and they fight. Then they turn back and fight again, and then the movie ends.

Two dragons fighting each other sounds cool in theory, but in practice its done with bad (even for 1997) CGI that makes the rubber-suit monsters from Toho look good by comparison. It's absolutely terrible, and while I'm sure this was envisioned as the climax of the film, the "dragon" sequence sucks what little life there still was in this utterly lifeless film. It's such a mind-bogglingly bad sequence that you have to wonder what the producers were thinking.

But then, that's basically the question you have to ask about every part of this film. It's one bad decision behind the scenes after another, as the studio threw $30 Mil at a failed production. It's like good money after bad when you hear it put like that, and that's the best and most apt description for this film. It's the perfect illustration of "throwing good money after bad" and someone from the studio should have stepped in early and done whatever they could to fix it even if that meant canceling it part way and washing their hands of the whole affair. This film is a tragic waste of whatever little potential came out of the first film and the one good thing to come from it is we were spared a direct sequel after this; the poor performance of Annihilation at the Box Office made sure of that.