Can I Get a Little Friendship?

What should we expect from a Mortal Kombat movie? There are plenty of video games that could lead to a proper, dramatic, award-caliber film (none of them come to mind because every video game adaptation has basically sucked, with the best of the list provided by Wikipedia being the decent enough Sonic the Hedgehog that I somehow never reviewed, and the also okay Detective Pikachu). By and large these films are terrible, so what can we really expect from a series of games that were never meant to be high art. 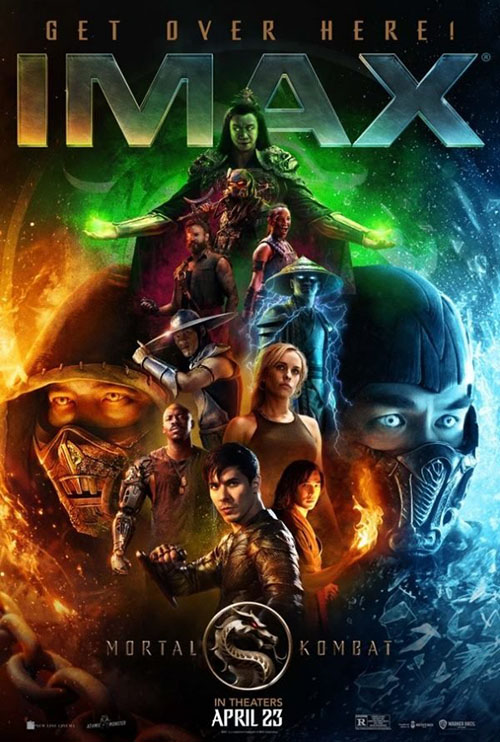 Go back and play the original games: they're absolute grindhouse cheese. This is a series made famous not for its story but for its realistic (for the time) graphics and gooey, splattery gore. The series has evolved its production values but never really evolved past that immature desire to see lots of guts and gore and, you know what? That's great! Sometimes you want high dramatics and sometimes you want to see one dude rip another guy apart before throwing his hands in the air because he won the fight. The Mortal Kombat series delivers on the latter (by and large) without ever trying to be anything more that a gutsy (excuse the pun) fighting game.

Admittedly, I didn't enjoy either of the original films based on the series -- 1995's Mortal Kombat and sequel Mortal Kombat: Annihilation, but that was because there wasn't enough of anything to keep me interested. The series was a solid R-rating while the movies sanded down edges and failed to deliver on the main draw of the series: the gore. For these films to be interesting, at the very least, they had to have good action and lots of blood and guts. The acting should be solid enough that it doesn't stand out, but it doesn't necessarily have to be good so long as everything looks right and the fights kick ass. Thankfully, for all those goal posts, 2021's Mortal Kombat reboot delivers, if only just.

The film opens 500 years in the past, with Hanzo Hasashi (Hiroyuki Sanada), a warrior of the Shirai Ryu ninja clan, living an idyllic life with his wife, son, and infant daughter, out in the forests of Japan, having retired from his warrior ways. Things, of course, come to a sudden and brutal end when Bi-Han, aka Sub-Zero (Joe Taslim), leads his Lin Kuei assassins to attack the compound, killing everything there. Bi-Han and Hanzo battle it out, with Hanzo eventually dying, his spirit sent to Hell. Only the infant daughter, hidden away, survives. She's found by lightning god Raiden (Tadanobu Asano) and raised to continue the Hanzo clan.

We then pick up in the present with MMA fighter Cole Young (Lewis Tan) losing a fight in the Octagon. He took the fight just to put money on the table but he's a warrior well past his prime. However, he bears a distinctive dragon mark, one he thought was a birthmark. In reality, though, that mark is the mark of the chosen, and each warrior that bear that mark has been selected to fight in the tournament to defend Earth: Mortal Kombat. Once this is revealed, after Sub-Zero arrives to try and kill Cole, he has to team up with Jax (Mehcad Brooks), Sonya Blade (Jessica McNamee), Liu Kang (Ludi Lin), and Kung Lao (Max Huang) to train and learn to fight in the tournament. Why has Cole been selected? Because he's the last of the Hanzo line and it's his duty to defend Earth and defeat Sub-Zero once and for all. 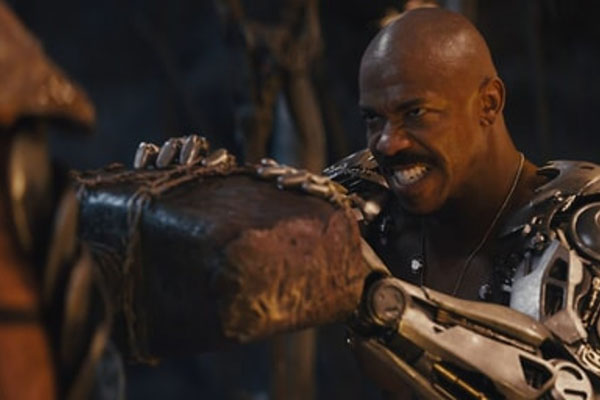 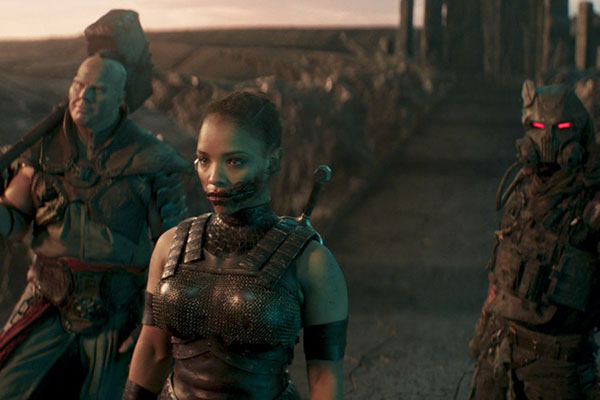 I want to be clear: this story is stupid and more full of plot holes than just about any film I've seen in a while (and, yes, we will go over all of them). But before we tear the plot apart, I want to make it clear: none of that really matters. The story is just there to drag the various characters from Point A to Point B so we can get to the good bits: the fighting, the guts, the gore, and the glory. On that count this film does deliver. It's hard hitting, with plenty of solid, well filmed action. It has hard hits, and more than enough nasty blood and gore to sate any Mortal Kombat fan. It toes right up to what was likely allowed for violence, gore, and language so it could still get an R-rating, and it makes the most of all of it.

All that being said, the story really is dumb and makes no sense the minute you stop to think about it. The main plot mechanic are the dragon marks. To gain a dragon mark you have to defeat another warrior in combat, with that other warrior having the dragon mark. Kill them and the dragon transfers to you. I'm with that so far but then how does Cole get his? He was born with it. Apparently his mark comes from the Hanzo family line and can be passed on from one person in the line to the next. So, what, the marks transfer via combat except when they don't?

By that same metric, how many warriors can there be if marks can only transfer from one person to the next? And if someone that already has a mark kills another person with the mark, what happens with that mark? Is this like Highlanders where they will eventually be "only one", or is there a certain amount of marks out there at any given time and one person dying at the hands of another marked person means someone else gets the mark? None of this is explained well in the movie and I found myself thinking about this a lot while the plot was trying to scroll past.

At the same time, we spend a certain amount of time with Cole, Sonya, and her prisoner Kano (Josh Lawson), as they try to figure out what Mortal Kombat is and how to fulfill the destiny of the dragon marks. It's only when Kano leads them to the temple of Raiden (because, for some stupid reason, he knows the way) that Raiden reveals that he needs to train them to fight in the tournament, which will happen in a matter of days. Dude, if you knew you had to train these people why the hell did you wait for them to come to you? And then he has the audacity to get mad that they aren't ready! The hell is wrong with you man? 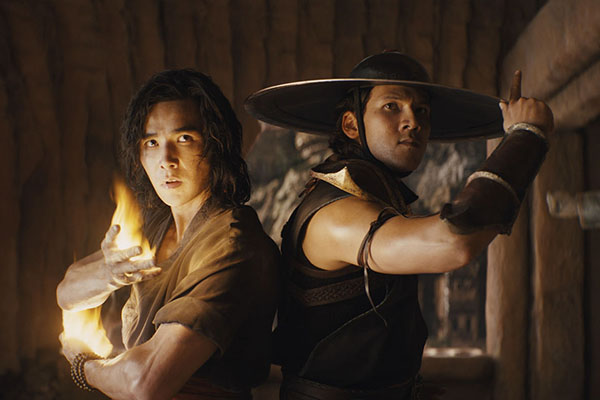 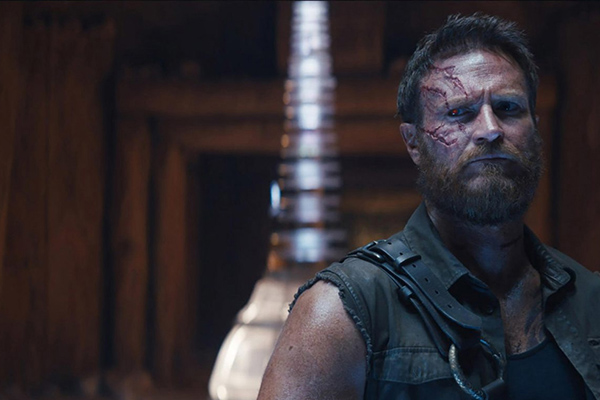 And then there's Kano, the guy who says, right up front, "I'm a bad guy and I will betray you." They get all mad after everyone trained him to be a warrior in Mortal Kombat and then, naturally, he betrays them. Did none of you listen to him when you told you, point blank, he would betray you. If anything, he's the only guy here who sticks to his character and does exactly what he says he'll do. He should get an award for staying on point because this man knows what he wants and knows how to get it done. His betraying everyone is the least surprising thing to happen since the sun came up in the morning and the sky was blue.

All that being said, again, none of it matters. I over thought the plot because that's what I do for these kinds of reviews, but I doubt most people will care. They just want to come in and see people get torn in half, watch guys lose arms and spines get shattered. That's Mortal Kombat. The point of a story in a Mortal Kombat is to serve as a vessel to take characters from not fighting to fighting, and this story serves well enough. It's not bright, it's not good, but it does the job and the actors in the movie do the best with that they're given, and then acquit themselves remarkably well when it comes to the fighting.

Mortal Kombat isn't meant to be high art. For this 2021 reboot, when I shut my brain off and just enjoyed the fights and the quips and let it all wash over me I had a great time. I doubt this will stand on anyone's list of good video game adaptations, but when it comes to Mortal Kombat the 2021 film delivers exactly as much as it has to, and that's good enough by me.