A Master Class in Master Detecting for Masters

I am not a Pokemon fan. Although I've watched a few run-throughs of the numerous games in the series (at events like Summer Games Done Quick 2019) I've never been sucked into the series. I know part of this is because when the games came out in the U.S. I was just slightly older than most of the kids that were getting into the series so I didn't bother (same reason I never watched Power Rangers). I never developed the special bond with the series so while I can certainly understand people thinking the pocket monsters are cute, I have no real love for them myself. 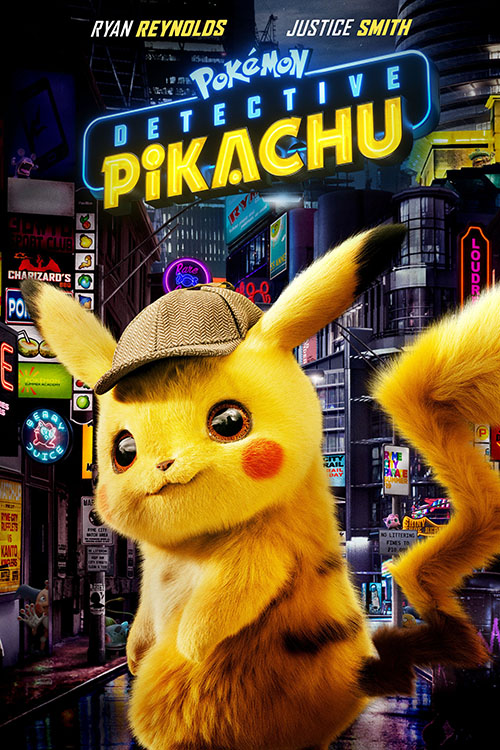 That said, I do rather enjoy Ryan Reynolds. I've been a fan of the actor since National Lampoon's Van Wilder, a film that showed how much he could carry a film because without him that movie would be a total mess, but with him in the lead it's hilarious. Of course, Reynolds is a huge star right now, having one of the biggest solo superhero films in his belt, Deadpool. So while I might not have cared about a film adaptation of a 2016 Pokemon mystery game, I was certainly interested in Reynolds do his Deadpool thing while voicing Pikachu. Whatever else the film might give us, I figured Reynold would deliver an irreverent performance.

And, certainly, Reynolds in the star of Pokemon: Detective Pikachu. In much the same way he carried Van Wilder and elevated Deadpool, he brings his sarcastic charm to a movie about a mystery-solving thunder-rodent. The movie is good because of the voice talent at the center of the film. Without him, though, this pikachu flick would be a total disaster.

In Detective Pikachu we're first introduced to Tim Goodman (Justice Smith), an insurance broker who once, years ago, wanted to be a Pokemon trainer but he never found a Pokemon that wanted to bond with him. Instead he remained one of the few Pokemon-less humans in Ryme City, estranged from his father and still grieving after his mother died years earlier. However, when his father mysteriously dies under suspicious circumstances, Tim is sucked into the case. Of course, he'll end up having a little help from a certain scholarly pikachu with an addiction to coffee (voiced by Reynolds) who, as it turns out, used to be the partner Pokemon for Tom's father. The two have to work together to solve the case and, quite possibly, find Tom's dad in the process.

There are two sides to Detective Pikachu, the mystery and the joy of seeing Pokemon presented in live action, and your enjoyment of the film will certainly hinge a great deal on how much you can get invested in both sides of the movie. As a non-Pokemon fan I was certainly working at a disadvantage and I can't deny that view of the film is certainly going to be different from someone that's heavily invested in the lore (and who probably played the 2016 game this movie is loosely based on). Think of my like those parents that have to drag their kids to a Pokemon flick just to shut them up -- I might know slightly more than those poor sods, but only by degrees, and I certainly don't care about the subject matter like any true believer would. 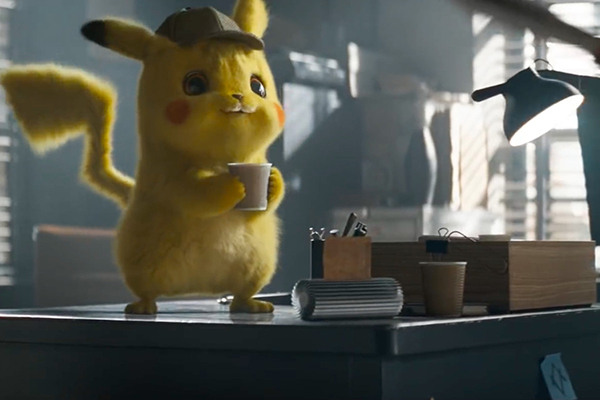 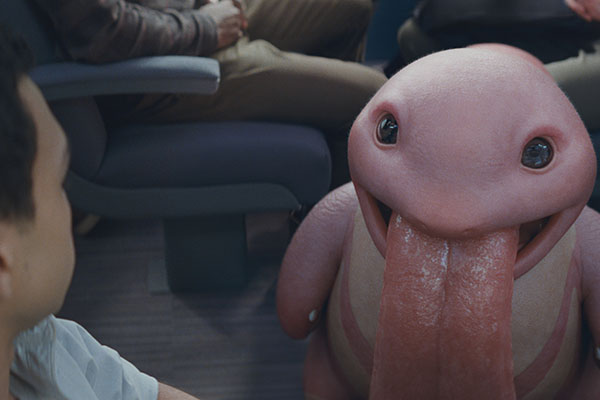 As such, while I could certainly appreciate the thrill of seeing your favorite Pokemon rendered in painstaking detail so they appear real (more or less) in a live action movie, I can't say I actually felt the thrill of it. Sure, the Pokemon on screen looked good, like Pikachu himself, as well as the Psyduck, Mew-Two, Snorlax, and all the others that showed up on screen. They did look like they really existed in the world (even if their cartoony designs seemed did slightly clash with the humans around them), and that's a technical feat that shouldn't be ignored. If you love Pokemon then, yes, this film delivers on that front and you'll probably be happy.

That said, for the uninitiated the film doesn't really do much to explain why the hell Pokemon exist or what the specific ones can do. I know there's all kinds of lore, more than could possibly even be summarized in a standard-length film, but it's a tad disappointing that the film dove in to the world of Pokemon with both feet without at least trying to help the uninitiated get up to speed. It's clear this film was designed to entertain anyone that's a fan of the series (young and old considering how long this series has been chugging along), but if you aren't in the know this film won't really help you catch up.

Is that an issue? Well, the Pokemon in the film are supposed to be the draw, right? They're half the characters of the flick but if I can barely identify a mewth or a rowalath or a pikafizz, how am I supposed to care? Certainly I won't have the same deep appreciation for everyone on screen a true believe would, and that leaves me clutching to the part of the movie I could invest in: the murder mystery. And, on that front, things are a tad shaky.

So the mystery eventually delves into illegal Pokemon experimentation and, of course, a dangerously overpowered Mew-Two (I say of course because I'm pretty sure he's been the villain or villain-adjacent subject of multiple Pokemon flicks so far). So the real question then becomes what exactly did Tom's dad stumble into and who would want him killed. Maybe this mystery could have worked if there were enough characters to make the case interesting. Unfortunately there are really only five major characters in the film -- Pikachu, Tom, Lucy (Tom's love interest), and Roger and Howard Clifford (son and father business men, one of two of which are clearly behind the crimes). It's obvious Tom is innocent from the beginning, and Pikachu can't be the villain in his own movie. Plus, Lucy doesn't have the connections, meaning Roger or Howard have to be behind it. 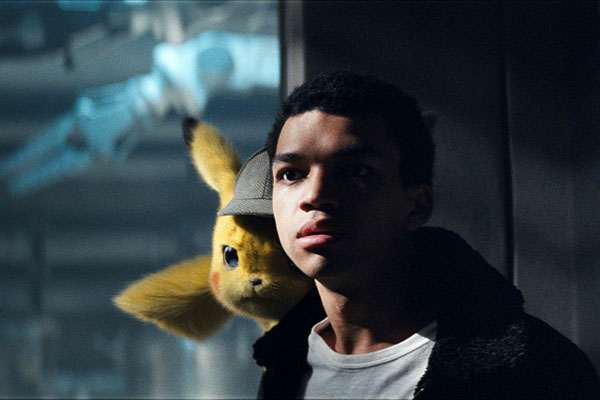 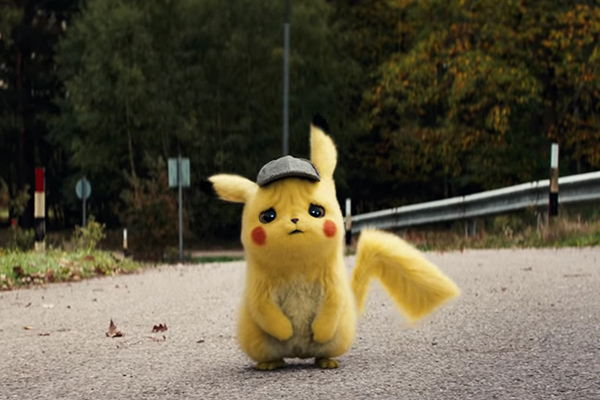 I'd say that's a spoiler but I'd basically already narrowed the field down to one of those two guys from the moment they were introduced. A good mystery needs enough red herrings to lead viewers astray, to make them question just who could be the bad guy. But when your pool is only two people it becomes pretty easy to guess what's going on and, in the end, figure out the whole plot of the film. The story is fun enough -- watching Pikachu go about the mystery business is amusing, to be sure -- but it lacks a solid core to really drive it home.

Thus the film lives or dies on Reynolds alone. Thankfully he does bring his A-game, doing for Pikachu what he did for Deadpool (just with a much cleaner vocabulary). His performance is winning, light and funny and irreverent. He makes the film work with both paws (so to speak), drawing laughs (I have to assume) out of his ad-libbed lines and improvised asides.

And it's a good thing Reynolds is the lead of the film because no one else is nearly as interesting. Justice Smith is fine as Tom, never memorable but he does at least give enough emotion that you feel his connection to Pikachu. Kathryn Newton is amusingly scatter-brained as Lucy Stevens, but the script doesn't really give her much to do beyond act as a plot device for Tom; I can tell they wanted her to be the Noir-style dame, fast talking and hard-as-nails, but the script doesn't really understand how to make that character work, so she just comes across as a manic-pixie-dreamgirl. She's still more interesting that either Roger (Chris Greer) or Howard (Bill Nighy), neither of which get to do more than be set dressing and occasionally glower. They aren't interesting enough to be villains, and the mystery never builds them up as more either.

I'd say, then, that Pokemon: Detective Pikachu is a bit of a miss. Its not a strong enough mystery, nor is it a good entry point for he world of Pokemon. That said, I'm not the ideal candidate to judge the latter point -- if this movie is just for Pokemon fans then half my criticisms of the movie probably don't matter. Plus, for me, all I wanted was a solid Reynolds voice performance and, in that regard, I got what I wanted. So is Pokemon: Detective Pikachu a good film or not. Well, I think we can probably agree its not perfect, so then you just have to decide what you want out of them film. For me I got what I wanted but, deep down, I doubt I'll ever watch the flick again.