I've never been into the Resident Evil series. Oh, I like zombies well enough (more than well enough if we're being honest), but the combination of janky controls, bad acting, and, let's be frank, rather basic game-play always kept me out if the early entries. The games, as much as they had solid atmosphere, were just basic adventures games with a bit of gussying up. Adventure games are fine for what they are, but the whole "go to this room, collect this chess piece, go to this room, set the chess piece to get a different chess piece, take it to another room..." just wore on me after a little while, and the whole experience lost me eventually. 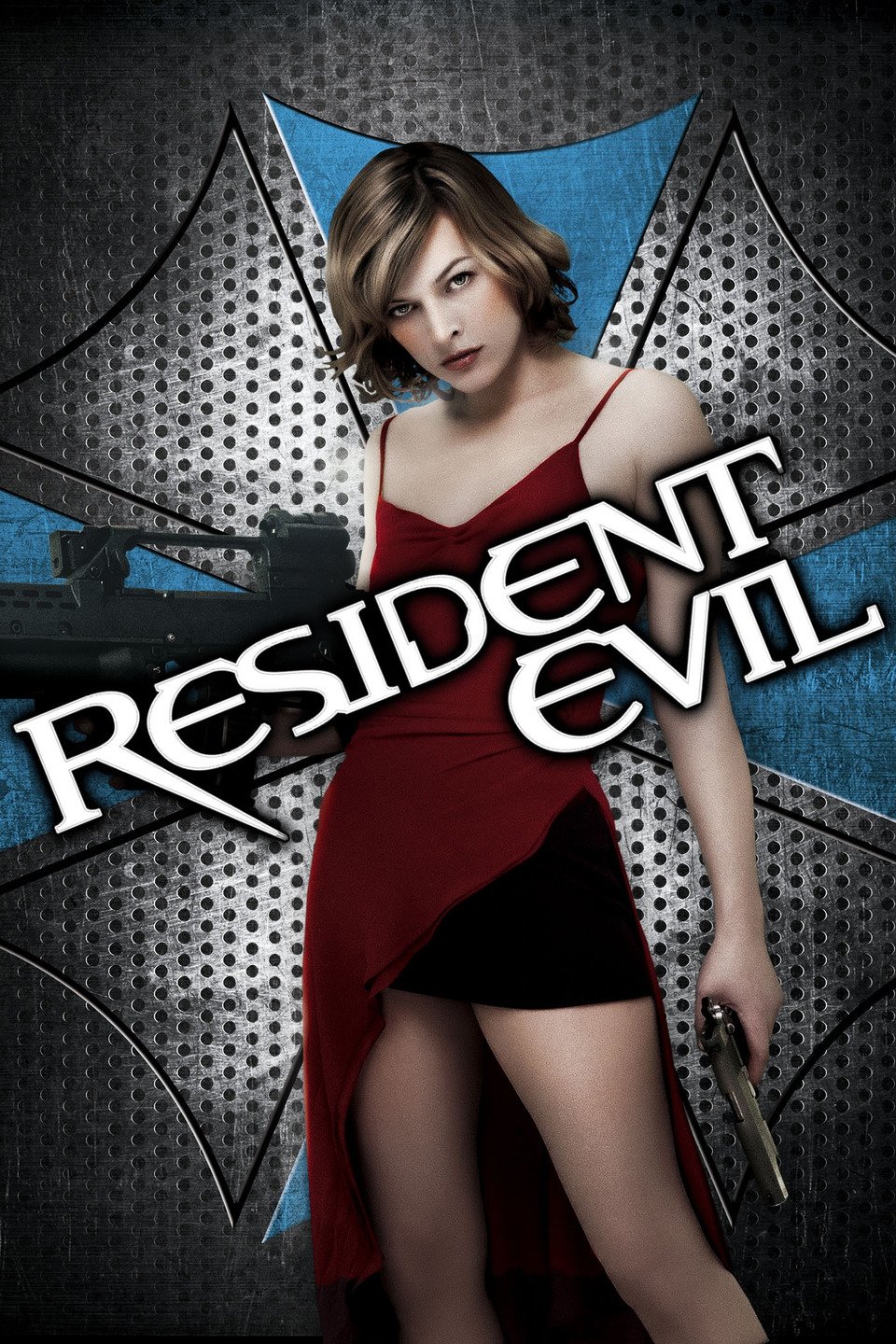 That's not to say I can't see why other people like the series. The ambiance, as noted, is solid and over the course of a number of games the series has managed to develop quite a mythology behind it. The controls in the games have improved, along with the graphics and the acting, and the series is in something of a renaissance with its latest entries, so certainly the fan-base is getting what they ask for. Maybe that's why the 2002 movie, also called Resident Evil isn't that well liked by true fans of the game series: it ignores all the characters and most of the mythology and settings of the games so it can focus on a different group of survivors in a zombie nightmare. And yet, the reason fans dislike it is the exact reason why I think it works as well as it does: it's not telling a tale beholden to anything else so it can let anyone in the cast live or die as it likes.

In the film we're introduced to "The Hive" a massive structure built by the Umbrella Corporation under Raccoon City (the city that acts as the main setting of many of the games in the series). Within the Hive a number of biological experiments are conducted, with the most promising (as we eventually learn) being the T-Virus, a biological strain that's able to reanimate dead tissue. Yes, it's able to raise the dead. The only problem is that someone tries to steal the virus and, on their way out, the smash a vial of the virus (taking all the rest). This sends the Hive into lock-down and, as we see in the opening moments of the film, the building kills all the workers within (rather ruthlessly, in fact).

We then cut to a woman passed out in her shower (she remains unnamed in this film but she's called "Alice" from the sequel on, always played by Mila Jovovich). It seems that she actually works for the Umbrella Corp. as one of their top security agents. The release of the virus, though, knocked her (and anyone else still alive on the massive, sprawling complex) completely out and temporarily wiped their memories. As a group of commandos sent by Umbrella take over her secret entrance to the Hive, they drag her along. Soon, she's trying to piece together who she really is, what happened in the complex, and what involvement she might have had in everything. All this while the dead suddenly start getting up and attacking her and the rest of the team.

I've been reviewing the various Living Dead films over on my Castlevania site, The Inverted Dungeon and I've noticed a few things that really work in those films, basic rules that solid zombie films need to use to really sell their material. When it's at its best, Resident Evil nails those rules, really making your care about the characters and events unfolding. The film, though, doesn't always nail this balance, often leaning too hard into it's own mythology instead of just letting the events of the film unfold naturally and cohesively. 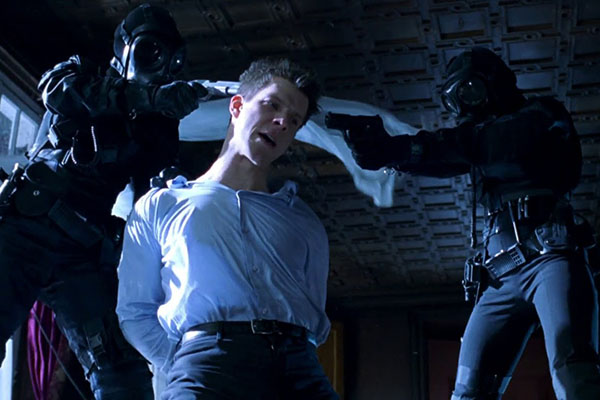 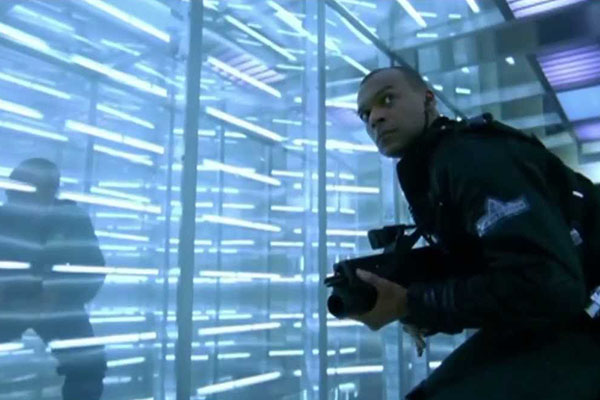 Certainly one of the best moments of the film is the initial lock-down sequence, as the various workers in the Hive go about their day only to get caught flatfooted with the building shuts everything down. This then changes into abject horror as they realize the building is actively killing them off. The whole sequence is probably about five or so minutes long, but it establishes a lot of factors -- the virus, the building, the lengths the computer system (called the Red Queen in the film) will go to contain the virus -- and it really sets a solid tone for everything that follows.

Unfortunately the film then loses all its momentum once it starts introducing all its characters going into the Hive, explaining everything over and over again as if we can't figure it all out. The classic zombie films were at their best when they didn't bother explaining anything. What caused the zombies? Who are all these people we're following? What's the back-story for each person and their entire life story up until now? These are questions we don't need to have answered, especially for characters that aren't going to last past the second reel when they become zombie fodder, but Resident Evil feels like we need an explanation for everything even before we get into the zombie action and things start to fall apart.

When the film is willing to focus on the action it does come together. After the initial setup, once the whole team that's been sent in to deactivate the Red Queen and reset the building has completed this part of the mission and is in the very bowels of the base (with half their team dead at the hands of the Red Queen, no less), this is when the film finally picks back up. They're outnumbered and out-gunned, strung out and desperate as they have to fight their way all the way back out of this base they just infiltrated. Its an interesting setup, a kind of inversion of the standard zombie film in that instead of holding up in a building waiting for the zombie apocalypse to pass it's the building itself that's attacking them and the survivors have to get outside to live. It's a twist that really works..

Unfortunately, even here the film doesn't quite nail it. A number of sequences are pretty good (the attack on the Red Queen, the first revelation of the dead come back to life, the final escape from the Hive), but other times the action feels oddly bloodless and airy. There are too many sequences where someone is surrounded by the dead and somehow they are able to escape, as if the horde of zombies just got bored and let them run off. Other times the zombies are easily held at bay from one direction even though they should all be able to swarm in from everywhere. The dead only attack when the director is interested and, the rest of the time, they just kind of wait around like a group of Kung Fu fighters waiting their turn in a bad 1970s film. You don't necessarily notice this on first viewing (I know I didn't), but going back and watching it again there were a number of moments where the film cheats simply to keep the characters alive and it just doesn't quite work. 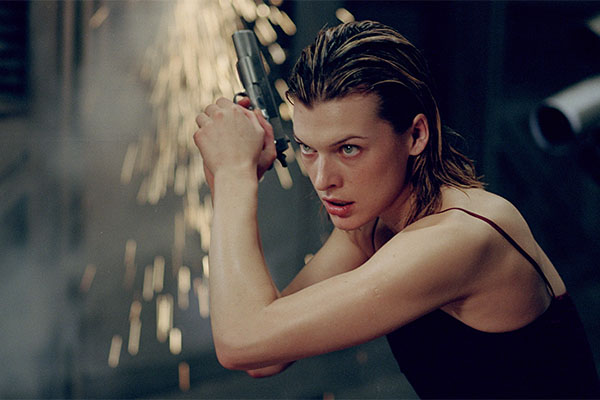 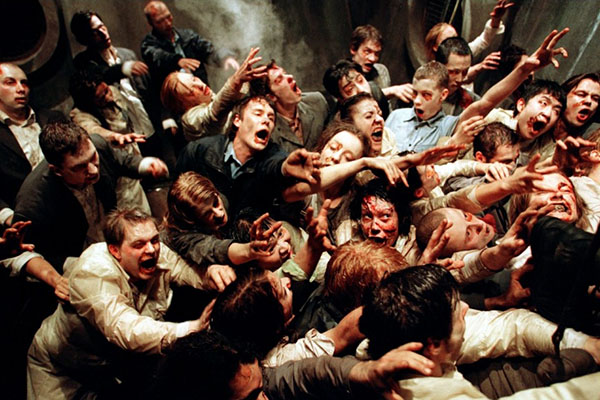 And, lets be honest, the "cutting edge" CGI they used for a number of sequences -- some of the zombies, the Red Queen, and the evil Licker beast that stalks them for the whole last act of the film -- just doesn't hold up anymore. It's not just aged but pathetically bad, as if they took CGI models from one of the original PlayStation games and stitched it into this film. That's a level of terrible you don't normally get in old movies, jaw dropping bad CGI that even films from the 1980s could beat.

The thing working in Resident Evil's favor is that it plays fast and loose with the mythology of the game series. We aren't in one of the previously seen bases so anything in here can happen. We don't know any of these characters from previous games so we have no expectation about who might live or die. The story can do whatever it wants and that helps to up some of the thrills and scares because anyone and anything could end up axed. But the film then doesn't know what to do with all this, giving us only decent action and cookie-cutter characters that needed more development (more talking about things in context and less just talking at us) to really work.

Resident Evil isn't a great movie but, for long stretches it does at least manage to be a fun movie. When I watched it in theaters years ago I thought it was great but going back and revisiting it I see a number of flaws and seams. I was hyped for the sequels back then (at least until I watched one of them), but if this film were released today I don't know if I would care about it anywhere near as much. It's a decent, but not great, zombie film that passably manages to entertain but then remains largely forgettable afterwards (except for that fantastic opening sequence).

Despite all this the film did manage to hold the distinction of being one of the best video game movies for the longest time. That's a dubious honor, to be sure, since we're talking about an era where the next-best video game-to-movie adaptation was 1995's cheesy, stupid, but kind of fun Mortal Kombat. Even now I'm not sure if there's a film that really surpasses this decent-to-okay film. Tomb Raider, maybe? For really good video game films you have to go with the "inspired" by idea, such as The Last Starfighter, or Wreck-it Ralph or, of course, Scott Pilgrim vs. the World, movies that borrow from the genre but aren't beholden to it. But for straight adaptations Resident Evil may be in a class by itself, not great but still better than the competition.