Back Around and Back Again

Are the Resident Evil movies actually made to audiences can be entertained? I found myself asking that as I sat through the fourth film in the series, Aftermath, and I don't think these were designed as mass-consumer media. They aren't intended to entertain wide audiences because, honestly, they're designed for an audience of one: Paul W. S. Anderson. The director of this film, who has served as writer on all the films in this series and directed most of them, including this film, clearly just wants to do one thing -- have his hot-wife, Milla Jovovich, be an action star -- and so he lets these films play out as a kind o directorial wet-dream all about his lead actress. 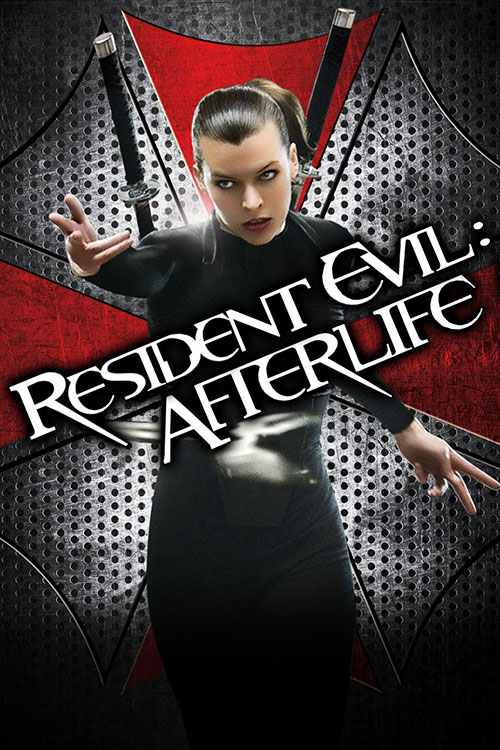 Clearly, for whatever reason, this style of movie works -- this film pulled in over $300 Mil, and every film in the series has been a success, pulling in double to triple their meager-by-Hollywood standards budgets cost -- but I can't say they're really all that fun to watch. They're dumb, they're loud, they're predictable, but they really aren't fun. But for some reason we got six of these, so someone, other than Paul W.S. Anderson, was going to see these films over and over again. Maybe nerds all like seeing Milla Jovovich in skimpy outfits fight zombies?

Everything you know, and have seen in the previous films, is here once again -- this film doesn't really have any original ideas. When last we saw our heroine, Alice (Jovovich), she had just discovered the lab that was producing hundreds of clones of her (because her body is best suited, for whatever reason, to the T-Virus). She uses these clones to take the fight to Umbrella, invading their Japanese headquarters (and central facility in charge of global affairs) to destroy the base and end Umbrella once and for all. All the Alices do a lot of damage, but eventually Umbrella blows up the whole facility, with all but the original Alice inside, completely wiping away that project altogether. The original Alice manages to sneak aboard the place of Albert Wesker (a recast Shawn Roberts), CEO of Umbrella as it flees the exploding base. They have a fight, he injects he with anti-T-Virus serum, depowering Alice entirely. But then the plan crashes and Alice escapes, seemingly the only one left alive.

Eventually she makes it Arcadia, Alaska, where she sent all the survivors from the last film, Extinction, except no one seems to be there. The only survivor she finds, Claire Redfield (Ali Larter), has been mind-wiped and implanted with a control device. Alice frees Claire, but with no one else around, the two bail out of Alaska. Then eventually end up in L.A. where they meet a new group of survivors, led by Luther West (Boris Kodjoe). That's when they find out that Arcadia wasn't just a town, it's a ship, one floating off the coast. If the survivors can get there they might just find salvation after all. It'll just taking finding a way across the entire city to do it.

I get it: these movies aren't meant to be high cinema. I can enjoy dumb movies, in fact, when they're well made, and if the movies want to play on the conventions of the video games, which for the longest time were terribly written and acted, that's cool so long as it does it in a humorous, wink-nod fashion. But while Afterlife is goofy and stupid in how it's constructed, it's also self-serious to a fault, lacking anything closely resembling fun or humor about how bad it is. It's just a tediously loud and boring movie. 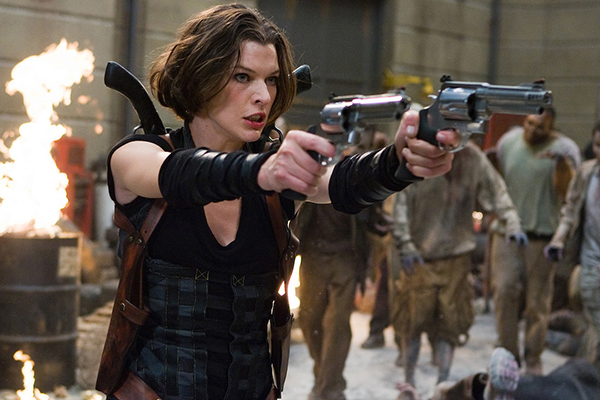 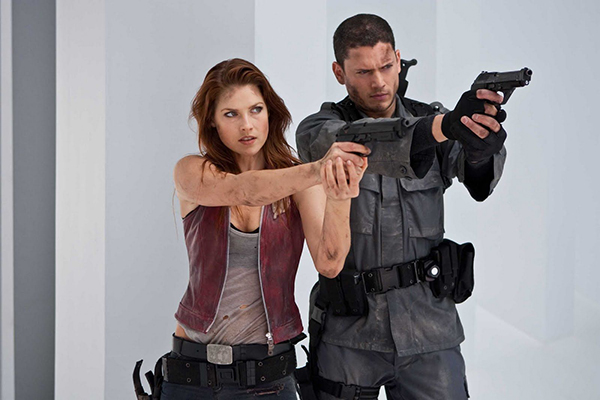 It's also stupidly unoriginal. Large swaths of the film feel like they're borrowed from the 2004 Dawn of the Dead, with fast zombies invading the facility the survivors are holed up in, and our heroes have to find a vehicle they can use to tank their way across the city and get to a ship to take them far away from here. It was an entertaining enough plot line back in 2004, but this film doesn't know what to do with it or how to make it work. It's best innovation is to have the tank not work so the heroes then have to climb into the sewers and escape that way, something they do so easily it's a five second cut to the next scene.

When the film isn't borrowing from better (still mediocre but better) zombie films, its full tilt stealing from The MatrixA speculative future story with superhero and anime influences, The Matrix not only pushed viewers to think about the nature of their own reality but also expanded what filmmakers could do with action sequences and filming. It then launched a series of movies, games, and comics, creating a franchise still talked about today. series. Every action sequence has to be done in slow-motion "Bullet Time", even if all the characters are doing is throwing a gun from one to the next. Every bullet has to have tracers drawn behind it, even kick has to be taken in as slowly as possible so we can enjoy the (terrible) form and (bad) wire-work. And the film's villain, Wesker, moves and acts like he's one of the ghosts from The Matrix Reloaded. Again, nothing about this film is original.

This movie also suffers from the fact that, like the films before it, it felt the need to push the reset button on the ending of the previous film. Although the last film setup an army of Alices that could have been interesting -- different missions for each time, a complicated plot as they all work to infiltrate Umbrella -- that was all wiped away in the first ten minutes of the movie so we could go back to Alice, once again, traveling the wasteland alone. In fact, everything in this movie is basically setup to get Alice right back to where she was near the end of the previous film, right down to reuniting her with the survivors from the last movie. You could honestly skip the last five minutes of the previous film, and all but the last act minutes here, and I don't think you'd even be missing anything. This film is just padding, unnecessary filler to spin our heroine around for two hours and accomplish nothing.

Maybe it could have been more fun if Alice were at all entertaining, but at this point Alice is barely a character at all. Affectless, with a dry monotone and hardly a smile ever, Jovovich isn't exactly bored of Alice, she just seems to want to play her as a personality-devoid machine. She's hardly and interesting lead character at this point, despite the fact that the films keep putting her front and center. If the movies would focus on other characters, talking about Alice as some mythical figure, someone that shows up when needed but isn't the sole focus, then that might be something. But that's not how it's worked so far despite how little interest Alice generates at this point. 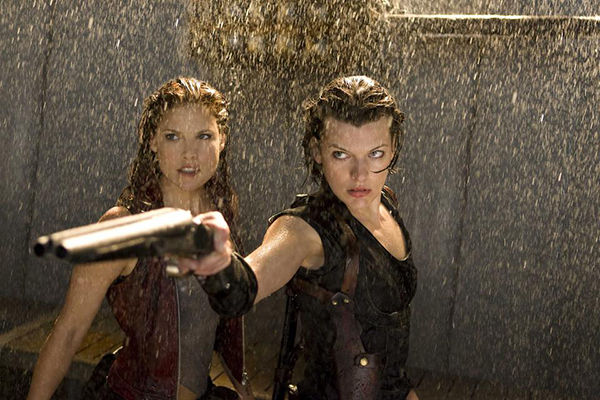 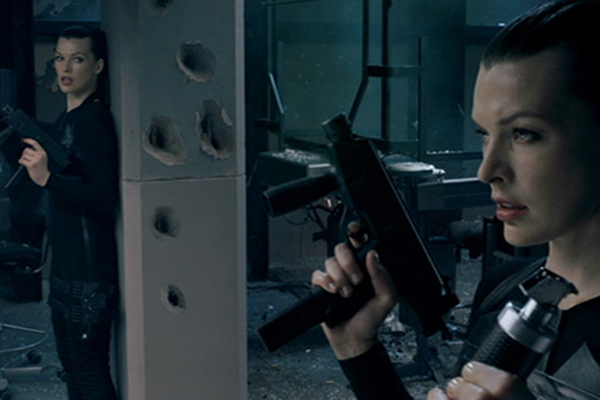 Frankly there are much more interesting characters played by vastly more deserving actors in this film. Larter's Claire Redfield has been through as much shit as Alice at this point, but where Alice is dead on the outside, Claire is vibrant and interesting, played with emotion by the actress. Chris Redfield is introduced in this film, and as played by Wentworth Miller, he's as charismatic as it gets. Of course, as we learned over on The Flash, Miller has more charisma than he knows what to do with and he enjoys acting dumb in bad movies. He brings style and amusing humor to Chris, making him quite watchable. Hell, even Kodjoe's Luther West doesn't get that much to do, but the actor imbues more life on the screen than Jovovich is ever able to.

Which brings me all the way back around to what the intent is of these films. Jovovich has been in a number of films but its hard to say that any of them really set the world on fire. The Resident Evil films really are her biggest movies, outside of The Fifth Element. Beyond that it's just a lot of garbage no one wanted to watch, forgotten as soon as they left the theaters. These movies were her big thing and I have to think, were it not for her husband in the lead on all of them, she wouldn't even have these to her name. But then the only person that really cared about these films was Paul W.S. Anderson, and if he wants to dress his wife up all pretty and make her do sexy action, he had the Hollywood money to do so. I just doubt anyone is going to fondly remember Resident Evil: Afterlife once they were done watching it.