Into the Facility Again

We're five movies into the Resident Evil films and I think we all have to admit that these films really aren't evolving. People complain about the fact that sequels just deliver the same story over and over again without anything new, an exercise devoid of any creativity or substance, but in the case of these films specifically I have to admit that's pretty true. The characters go round and round each other, getting into the same problems they had before, and the solutions are always the same. 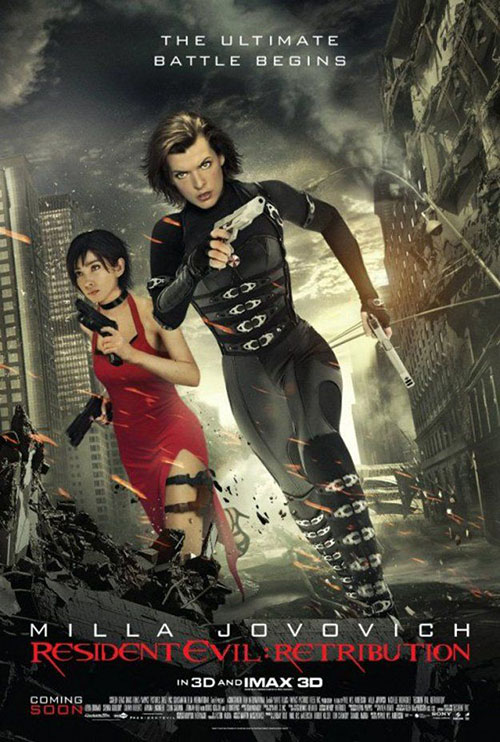 In the first film we had a team infiltrate a zombie-infested facility, only to have to try and get their way out when the zombies got loose. The second film used the same setup, except this time the heroes had to go into a zombie-infested city and then get back out. Then we went into a deserted city that, unsurprisingly, had zombies that the heroes then had to escape, followed by another city (this time with a prison the heroes had to infiltrate and then escape). It's the same setup, time and again.

This time around Alice (Milla Jovovich, as always) has been captured once again and put into yet another Umbrella facility -- you know, something that's happened to her in every movie before this. The facility in question is the main hub of all of Umbrella's machinations, a giant testing facility deep underwater (in a way, like the Hive) where Umbrella (as headed now by the Red Queen) runs simulations (with clones all the major characters in the series so far) of the T-Virus to sell the various countries on their bio weapons. And, smack in the middle of it all, of course, is our heroine.

But fear not as, once again, she'll be joined by a whole crew of disposable allies that largely won't make it to the end of the film -- Li Bingbing as Ada Wong, Johann Urb as Leon S. Kennedy, Boris Kodjoe as Luther West, and Kevin Durand as Barry Burton. Meanwhile, a bunch of characters we remember from before -- Sienna Guillory as Jill Valentine, Oded Fehr as Carlos Oliveira, Michelle Rodriguez as Rain Ocampo, Colin Salmon as James "One" Shade -- are now controlled by the Red Queen and are after our heroes, willing to kill everyone so they can recapture Alice and experiment on her once more. It's kill or be killed for our heroes in yet another underground adventure.

These movies are, quite frankly, ridiculous. Sometimes it feels lime the movie understands this, buys into it, and at least has some fun with it. The very concept of the underground simulations, blocks-wide recreations of cities with weather and sky and all that, is an interesting concept that the film has a bit of fun with, running Alice and her cohorts through fun house versions of these famous places. Watching them cause untold carnage through these locales, especially when good and evil versions of the various characters show up, is a bit of trippy fun. 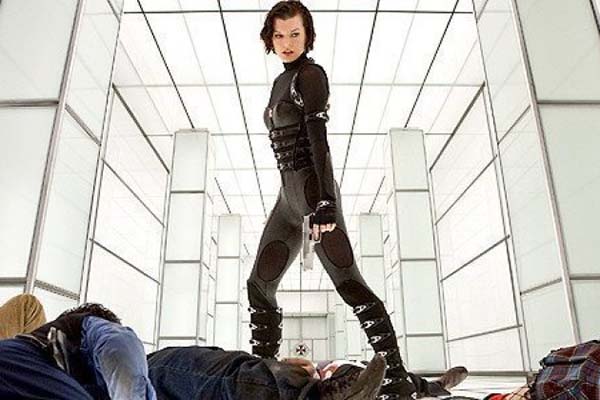 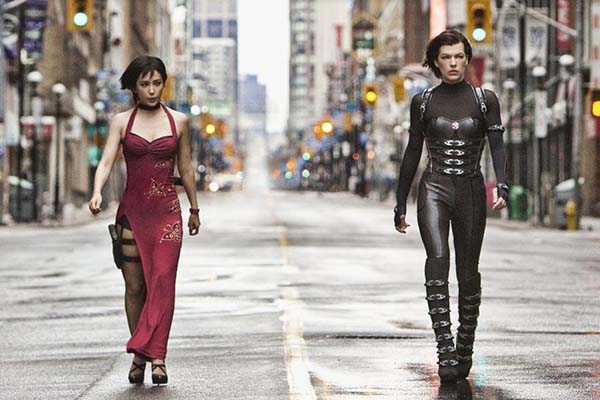 And yet, the rest of the time the movie is just idiotic without any joy behind it. For starters, the actual action of the film is still ridiculously bad. Paul W. S. Anderson maybe be the "mastermind" of these films (a term I hate using for something this stupid) but he lacks any kind of eye for action. He over-relies on CGI and wirework without the grace and panache to make these kinds of effects work. It's all comically staged, in a bad way, meaning that when the film cuts to its next inevitable action sequence, something it does with regularity, you're more likely to just shut off and not care. It's all dumb and bad looking, so why bother?

It sucks because there are moments that really should be interesting. The idea of these simulations going of, of being able to see good and evil version of the various characters from the series running around, is something that could have serious legs. If the movie invested in Alice not knowing which life of hers was real, maybe putting her at various times in the Russia, New York suburbs, and Japanese city settings, each time rewriting her and making her adapt, questioning everything she knows as she flits from life to life, that could be fun. But as soon as it introduces these new settings it tosses them off. The Alice we see in the suburbs isn't our Alice, and once we figure that out there's no investment anymore in the setting.

The smartest thing the film does is give us a character relationship we can care about. The suburban-version of Alice ends has a kid, Becky (Aryana Engineer), and thought her mom dies Becky survives the simulation. The real Alice finds the girl later and once Becky calls her "mom", a bond if formed. This gives Alice someone to fight for, and when the zombies steal the girl away late in the film. Alice has to go and rescue her. It's a plot development you actually care about because, for once, the film actually invested in the interactions of two characters and let them form a natural bond.

That said, the plotting of that sequence is blatantly stolen from the climax of Aliens, right down to Alice and the kid running from the facility as the bombs Alice has placed blow up behind her, destroying the "alien" hive (the alien in this case being a licker, but the setup remains the same). Like everything else in this film is five-percent of a solid idea mixed with ninety-five percent stolen content and regurgitated crap from previous films in this series, or other, better films. Nothing her is truly genuine or original. 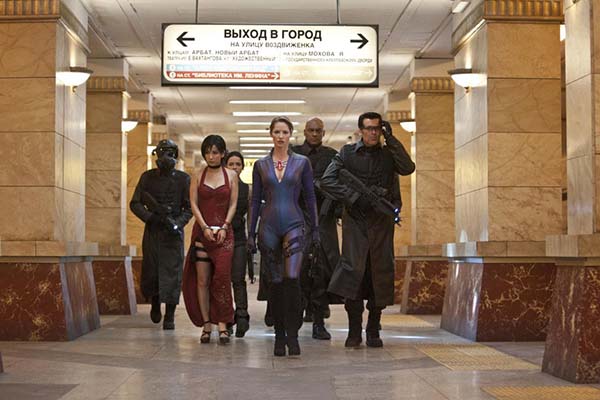 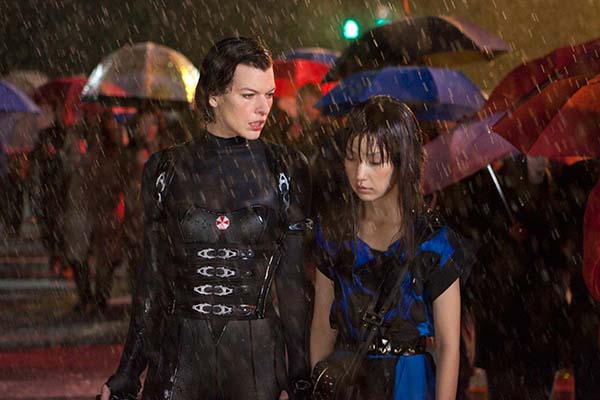 To top it all off, the acting in this film blows. There are two performers in the whole piece that are solid -- Engineer and Rodriguez -- and the rest of them are stilted, flat, and awful. That includes Jovovich, the star of this damn film (and the whole series), who seems so over Resident Evil and is just in the film to collect a paycheck and humor her husband. "He's doing such a good job making a movie, let's all be supportive while he plays with his toys." It's nice of her to show up, but it would have been better is she actually cared.

I will note that this film isn't as bad as the fourth movie in the series, Extinction, but that;s only by a thin margin; movie four set the bar so low that any film probably could have skirted over it, and Retribution manages to just barely. It's a tolerably bad film, but a bad film none the less. Thankfully, at this point we only have one more of these live-action films to get through. Maybe, just maybe, the films end on something of a high note. We can only hope...