And Now, In the Original Universe...

Having finally finished the main Resident EvilFirst released a Biohazard, the Resident Evil games, and eventually movies (awkwardly and clumsily) tell the stories of a world ravaged by zombies and the greedy corporate, Umbrella, seeking to profit from the mess. cinematic series, it would have been nice to think we were done with the filmic side of that franchise -- certainly I would have liked never having to watch any of them again. Unfortunately for anyone that prides themselves on good taste, Capcom went the extra mile and set up a second, competing franchise of Resident Evil films. Told in an CGI/anime fusion style, these movies are bad. Just bad. There is no other way to describe it. 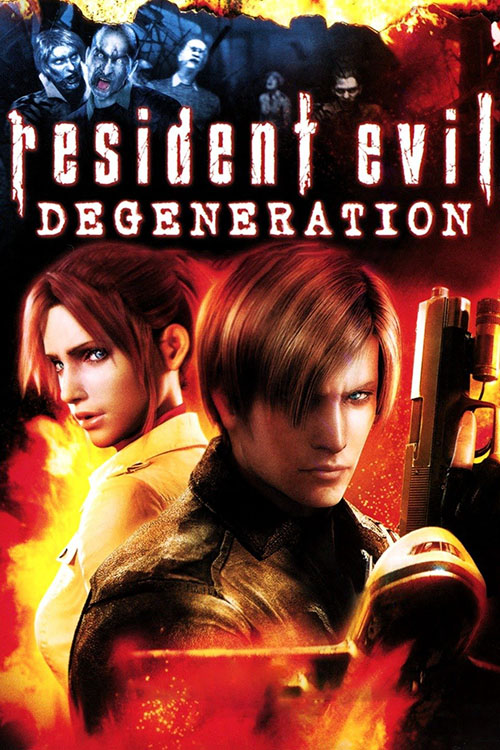 Well, okay, I guess I could see how maybe someone that was a true fan of the whole video game series might be happy to have these films, starting off with 2008's Resident Evil: Degeneration in their collection. Unlike the Milla Jovovich-starring films, this series directly ties into the video games series, existing in the same continuity (more or less) as the games. While the live-action films featured characters from the game franchise -- Claire Redfield, Chris Redfield, Jill Valentine, Ada Wong, and more -- these versions of the characters exist in their own universe, feeling like off-brand versions of the originals. Nothing tied the original games tightly to the movies (nor should they because those movies suck). For a hardcore fan, having movies that tie into the games had to be a fulfillment of a dream.

It would just be nice if these movies were any better. While these animated films ties into the games they also show the series's lack of ability to tell stories. The games are known, and enjoyed, for their tilted acting and narrative leaps of logic, the original PSX games playing on the trashy Grindhouse-style movies of old, but what works in silly game cinematics doesn't work in long-form filmic output, and this film (and, from what I've so far seen of its sequels) stumbles trying to construct a proper, interesting narrative out of the bones of the video game series, and it just doesn't work.

Normally in these reviews I try to summarize the story of the film I've just watched, but I'll be honest: the story of Resident Evil: Degeneration doesn't have much of a plot. There's something about WillPharma, a group that is working on a G-Virus cure for the T-Virus. This ties into an evil Senator, an airplane crash at Harvardville Airport, and zombie outbreak at that same airport, and then an actual attack at the WillPharma headquarters. Frankly, none of it really ties together well, with characters just wandering from one set-piece to the next trying to make sense of what's going on, but things really just happen and then, to distract viewers, zombies attack. I wouldn't say the live-action movies were great (hell, I just said above they're awful) but they at least have more of a story (or, really, the same story six times) than this film has.

What this film really seems like is a chance to have a bunch of game-related characters hanging out in the same setting, interacting and fighting zombies because that's what fans of the series expect. But because of the place the series was in when this film was made -- Umbrella had collapsed and all the characters associated with that evil corporation were dead -- the film struggled to come up with a villain to worry about or a story that made sense in the setting we were left with. It just doesn't work at all. 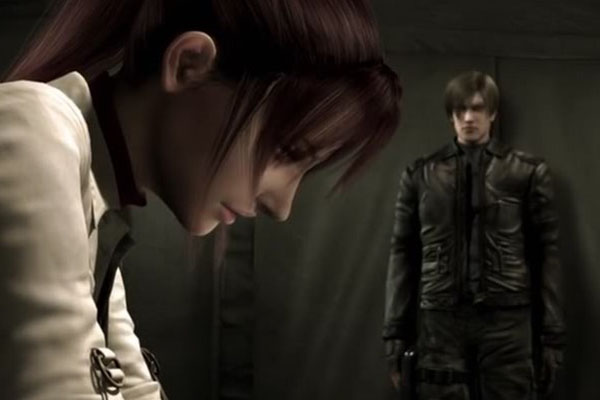 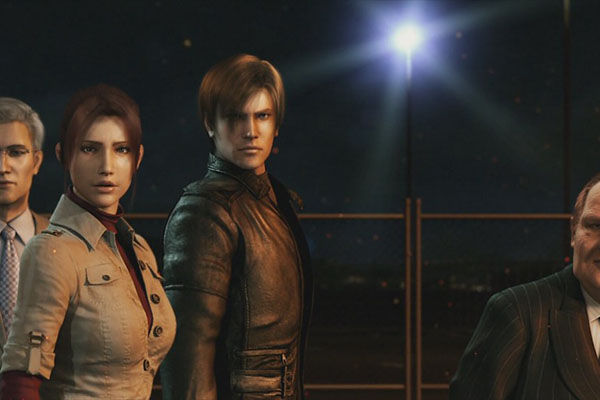 The problems really start right from the outset. The airport sequence is supposed to be a big stunner, something to suck people in. The issue is that the pacing is off, and things happen without reason. There's protesters at the airport, some of them dressed up as zombies. But then actual zombies show up and attack inside the airport. After that, we an airplane crashes into the building, and we realize there are zombies on the airplane, too. How does all of this happen? Because conspiracy, but there's no way any of the characters we know, based on where they were and what was going on, could have engineered this incident. It's attributed to them without reason of justification.

That's how the whole of the story, such as it is, flows. Characters show up, say things that supposedly happened or will happen, and then zombies are thrown in just to pick up the action. On top of that, people that are setup to be heroes are clearly telegraphed as villains so that, when their heel-turn happens, its entirely expected. In fact, it's so expected that when the heroes are caught off guard and react in a shocked manner, you have to wonder why? How did you not see this coming people? Are you idiots? Were you not paying attention for even five seconds?

I guess that this movie has to be treated like the video games where you just shut your brain off and enjoy the action. The action, such as it is, isn't bad. It's gory and decently direction, skipping past all the stupid "bullet time" and jumpy cuts that I came to expect from the live-action films. This is a competently made, if not exceptional, little action film. The issue is that a bad story stitched around decent action can work as a video game -- you're in control of the character and get invested in the action even if you skip past the bad cinematics. But a film is all cinematics, no control over the characters, so the needs of the film are completely different.

This ties into another issue: the film barely introduces the characters in the film, simply dropping us into the action and assuming, from their names, we'll know who they are. If you're deep into the video games, that works well. As someone who has only played a bit of the first two games, where most of my exposure is the live-action series, giving us barely sketched-out characters doesn't work. We don't have the knowledge of these characters, the long history with them that informs who they are and why they act the way they do. What the film needs is character development, something to inform us of these people, who they are and where they've been leading up to now. 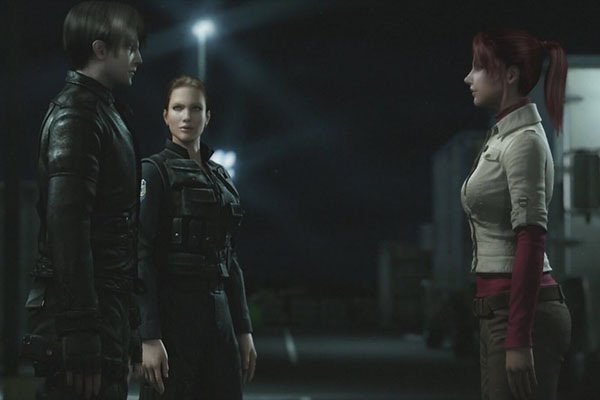 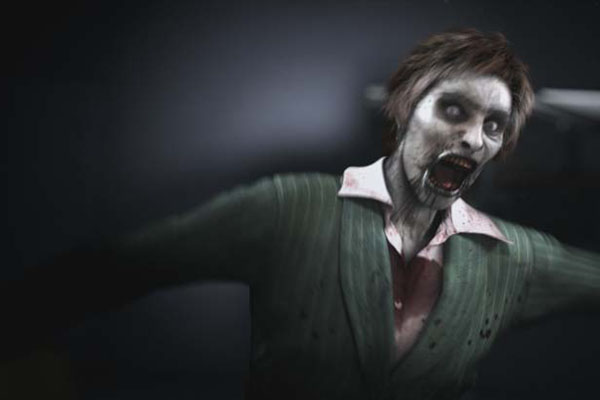 Take Claire Redfield (voiced by Alyson Court). She comes across as a sort of eco-lobbyist railing against the T-Virus and the corporations that look to use it for gain. There's more to her, though, seeing as how she's been in two games and spent a fair bit of time as a vigilante, but none of that comes across here. Or Leon S. Kennedy (Paul Mercier) who has been a playable character in three games and is one of the great heroes of the series. Here, though, he's a flat and generic soldier guy without any substance of charisma. These heroes aren't served by the material, and it's hard to invest in what they're doing, let alone if they live or die, because the movie gives us nothing to work with.

For the time it came out, Resident Evil: Degeneration looks decent; it's a mid-2000s CGI film that hasn't necessarily aged well in the graphics department but, at the same time, isn't so ugly that you hate watching it. It's competent, like the action the movie features. But it doesn't have a story, or characters, or substance, sticking to the aged storytelling style of 12 years prior without any upgrades or knowing, winking humor about the subject matter. This is a poor movie downgraded by awful plotting, an absolute slog to get through that somehow comes across even worse than the live-action films that share the franchise. I didn't think it would be possible to do worse than the series films produced by Paul W.S. Anderson, but somehow Degeneration sets an even lower bar. I didn't think it was possible and I wish the film hadn't proven me wrong.