A Lot of Running Around

When it came out, 2002's Resident Evil felt like the best zombie film to come out in ages... largely because it was. At the time we were still three years out from the next George Romero zombie film, the actually pretty terrible Land of the Dead (ICVD), and the best zombie film we'd had before then was the 1990 remake of Night of the Living Dead (which I liked, even if I'm in the minority), and it had been 13 years since that film was released. Zombie fans wanted something good, something that showed producers still cared about the genre. Resident Evil might not have been the best film in the genre, but at least it tried. 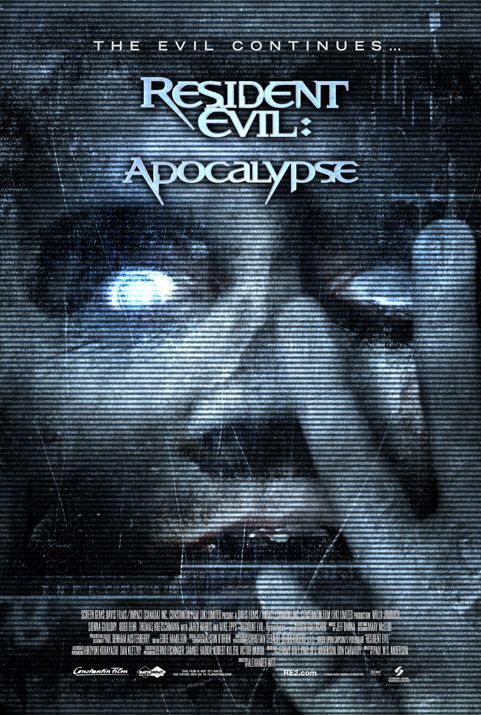 Of course, Resident Evil was also a video game adaptation, and those films have all been notoriously bad (Super Mario Bros., Street Fighter, Double Dragon, just to name a few). The fact that RE was actually pretty watchable was honestly astounding. These films aren't supposed to be good... Well, okay, Resident Evil isn't good, something I realize going back and watching it again, but it was at least fun and stupid popcorn enjoyment. Certainly better than any other video game adaptation (except for maybe the stupidly fun Mortal Kombat, which was directed by Paul W. S. Anderson, who also directed Resident Evil... huh).

It's fair to say that sequel Resident Evil: Apocalypse had high expectations when it was announced. Too high, honestly, because there was only so much you could do with a video game series that, at the time, was prized for its bad acting and stupid storytelling. The fact that even one decent movie was made based on the early games of the series illustrates the fluke of it all. There was no way a sequel could live up to even the bar set by the first film, let alone fan expectations. And yet, those of us that liked the first film hated the sequel all the same, unfair as that was.

Apocalypse is a bad film. I could honestly end the review right there and most people would likely be satisfied because, deep down, we all know it's true. After stranding Alice in a medical facility in the middle of the hollowed out and zombie infested Raccoon City, the expectation was that Alice would take her one-woman killing spree on the road, taking out waves of zombies while she found her way out of the city. What we didn't expect, though, was that the adventure would be so... boring. This is a tedious movie that doesn't really know what it's doing or where it's going, simply spinning out a yarn of survivors running around, not doing much, until somehow they all escape.

The basic meat of it is that a little girl, Angie (Sophie Vavasseur), the daughter of one of the scientists working for Umbrella Corp., is lost in the middle of the city as the zombies rage around town, and the scientist, Dr. Charles Ashford (Jared Harris), puts out a call to various people that might be able to save Angie: find the girl and he'll help them escape the city. So various people show up -- Oded Fehr as Umbrella Soldier Carlos Olivera, Mike Epps as random civilian Lloyd Jefferson "L.J." Wade, Sienna Guillory as Jill Valentine, and Milla Jovovich as Alice -- all trying to find Angie and get her out of town. 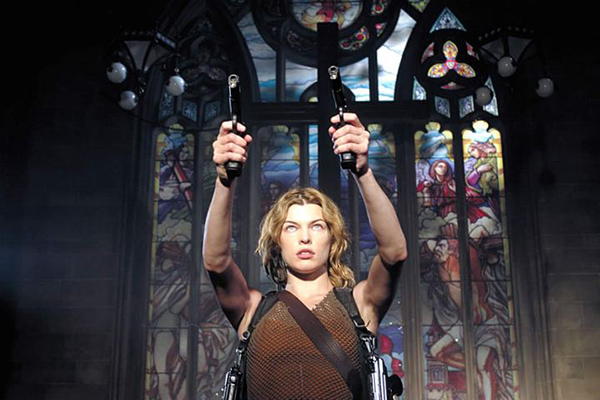 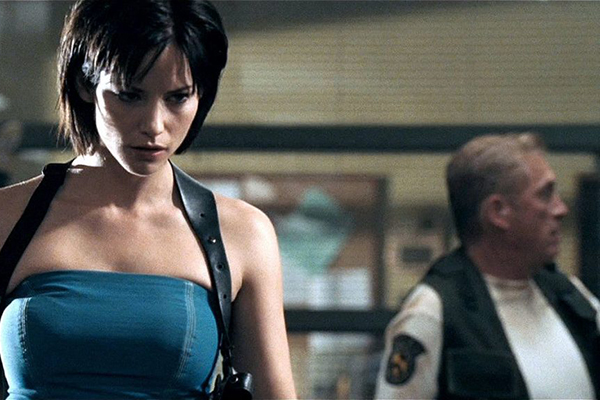 But while this is going on, Umbrella is watching. They're using this outbreak of the T-Virus, and the resulting zombie carnage, as a way to study the disease, and their bio-weapons, and find out just what happens when the toxin is released. They actively work against the survivors, purposefully killing killing of the authority figures, S.T.A.R.S agents in the field in Raccoon City, to further destabilize the situation. In the end it'll take more than getting the girl out of town to save the day: our heroes will have to find a way to stop the mastermind behind Umbrella's latest atrocity, Major Timothy Cain (Thomas Kretschmann).

It's hard to say anything really happens in Resident Evil: Apocalypse. Yes, characters are introduced, and people run around a lot, and then some of them die, but nothing really happens. We don't understand any of the characters any better at the end of the film than we did at the start, the corporation is still in control at the end of the film, and even Alice ends up right back where she was at the start of the film by the time the credits roll: having just escaped yet another Umbrella facility, under their thumb and barely knowing who to trust or what danger will come out next. It's weird to call an entire film a "place-setting episode" but that's exactly what this feels like.

A big part of the issue is that the story isn't resolved in the slightest at the end of this movie. Yes, that was the case in the previous one as well, but that one at least had momentum leading into the next film. Here, in its sequel, everything is basically reset without any major changes. Worse, because the film has basically spun itself around for 90 minutes to get back where it started, we don't even have any faith the next time will be any different. This is a film that somehow manages to suck all the energy out of its franchise all so it can setup yet another adventure to inevitably come out a couple of years later.

Of the characters, not a single one is worth keeping around. Sure, Olivera is a nice dude, and Jill Valentine has some spark, but none of them really have personalities. We don't learn anything about them and if, by the end of the film, one of them were to die, we wouldn't mourn. I didn't care when anyone in the film died at all and the film never finds a way to get us to connect with any of them. Of course, including Jill Valentine didn't help matters -- she's a character from the game series who has a history, in the games, that comes after when this movie is nominally set so we know she's not even in any danger the entire time. You can see the plot armor protecting her, and you can feel it around everyone else as well, the ones that are clearly fated to live. 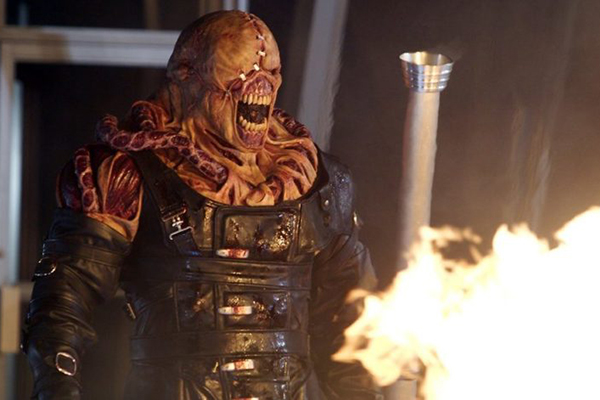 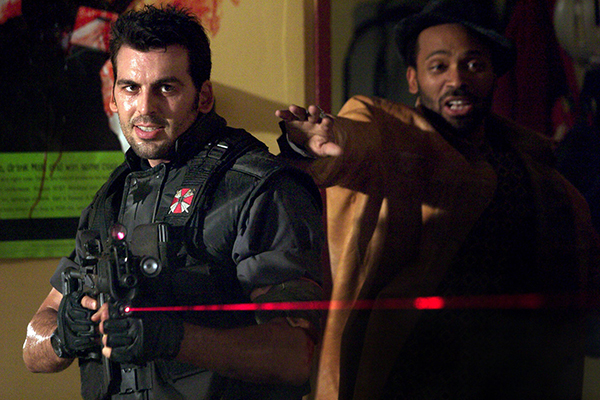 That speaks the another issue with the film: there's no suspense. Part of the problem is the direction, which is choppy and hard to follow, especially during the action sequences. But even when things are filmed halfway decently, everything is done with an overabundance of CGI and green screen. Nothing feels real, its all weightless and empty. There's no gore, no fear, no terror. It's a zombie film but utterly bloodless, rendering it all but impossible to get invested in the action at all.

Then there's Alice. In the first film she was just a human, someone hired by Umbrella to protect their secret base. But here she's been experimented upon, injected with the T-Virus, implanted with biotech and rendered into something far removed from her character in the first film. She's alien and weird, not someone we can invest in. This movie is supposed to be her journey, maybe helping her find a way to either regain her humanity or become something else, but the film has already pushed her so far outside the bounds of a believable character that I just didn't care. Whatever the films had in store for her, I was already done.

If only it was that easy. I hated this film when it came out but, somehow, it managed to rake in $129 Mil, over $20 Mil more than the previous film. I don't know why, or how, but for some reason people liked this movie. And so we were subjected to four more of these crappy films...